Photographing Decay with the Rolleiflex Camera


Dear Readers, in the previous article, I described the Leica cameras that served me well for decades. This article is about my Rolleiflex twin-lens reflex (TLR) cameras. I bought my first one in Houston, Texas, in 1980. I wanted to try medium format film and thought about a Hasselblad camera. Instead, I decided to buy a used Rolleiflex, use it for awhile, and then "move up" to the Hasselblad. Well, 25 years later, I was still using the Rolleiflex and never bothered with the 'blad. In the early 1980s, you could still buy a brand new Rolleiflex 2.8F from the New York vendors for about $2000. That was serious money in 1980, but afterwards, I, and many other photographers, wish they had bought one while they still could. Franke & Heidecke went bankrupt in the 1980s and went through a series of reorganizations. Camera production continued at a low pace until about 2014. 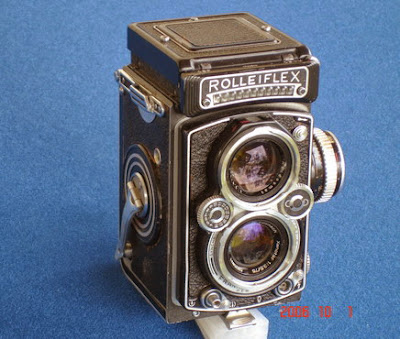 This was my 1956-vintage Rolleiflex 3.5E with a Schneider 75mm ƒ/3.5 Xenotar taking lens. A Rolleiflex used 120-size film (introduced by Kodak in 1903) and yielded 12 2¼×2¼-inch frames (actual size: 54×54mm). With the large film area and top-quality lenses, you could make beautiful large prints with long tonal range, clearly superior to 35mm.
Franke & Heidecke emphasized the finest craftsmanship and precision. Taking and viewing lenses were matched for exact focal length. Up through the 1960s, every camera was film-tested at the works. 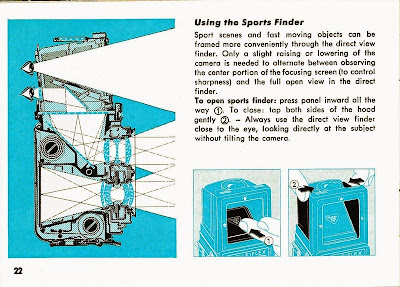 Why two lenses? This page from the instruction book may help. The lower lens projects the image on the film plane. The upper lens (a simpler optical design) projects the image to a mirror, and the user has the choice of looking down into the waist-lever finder, attaching a prism on top for eye-level viewing, or using several other viewing procedures (see the picture). These TLR designs were lighter and more rugged than cameras with a moving mirror (single-lens reflex models). Also, the TLR was quiet, so it was perfect for travel and street use, and models were not intimidated by a huge projecting cyclopean lens staring at them (Digital SLR users with your macho penile zoom lenses: try to remember that). Note: the taking and viewing lenses must be matched in focal length perfectly. The technicians made sure of this in the factory. 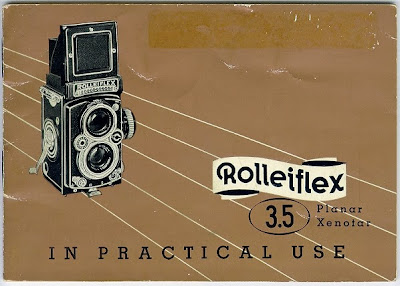 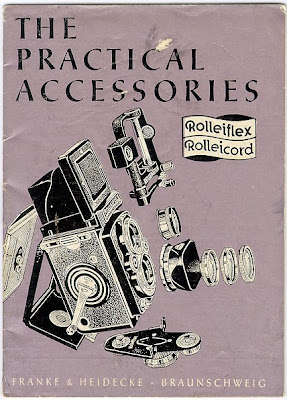 Franke & Heidecke made a large number of clever accessories for special applications, like taking close-ups (and, of course, to separate you from your cash). The owner manuals were detailed and described fundamentals of depth-of-field, focus, shutter speeds, and subject movement. Photographers were expected to be interested in optical and photographic fundamentals back then (hint to the Instagram and digital generation). 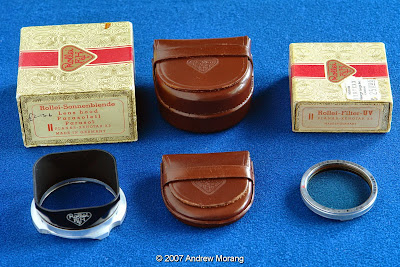 Everything for Rolleiflex was absolutely the best quality. Lenses were individually tested before installation in a body. Accessories fit in nice little leather cases. 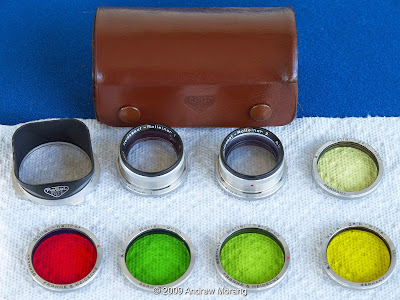 Filters were anti-reflection coated and were loose-fit in their mounts to prevent stress warping. The two aluminum devices in the back row were close-up adapters called Rolleinars. The diopter went on the taking (lower) lens and a view converter went on the upper (viewing) lens. It adjusted the field of view to coincide perfectly with what would appear on film. These were the bayonet II size. Rollei made filters in Bay I, II, III, and IV for different models of cameras. 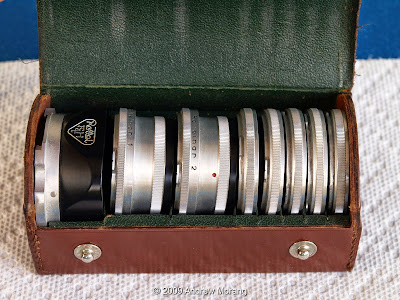 This little leather case contained a hood, two Rolleinars, and 5 filters. Lens accessories were attached by a bayonet mount, so the operation was quick and positive. Today, most companies have reverted to screw-in filters, which are slower and more clumsy (but cheaper). The better Zeiss lenses still use bayonet filters. 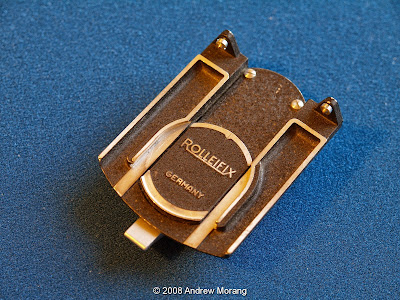 This the quick release for use on a tripod. You pushed the lever down and the camera slid into the rails. 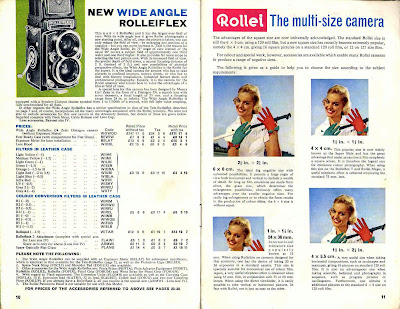 Because the lens in a Rolleiflex was fixed, the company introduced a wide-angle camera with a 55mm ƒ/4 Zeiss Distagon lens in 1961. They also made a telephoto model with a 135mm ƒ/4 Zeiss Sonnar lens. The page above shows the wide camera and an interesting comparison of film sizes. The Rolleiflex could fit adapters to make exposures that were 6×4.5 size, but most people opted to use the full 6×6 size. This page is a scan from the 1961 catalogue from R.F. Hunter Ltd., London (from wheeldon.plus.com). The Rolleiwides were rare and now sell for serious prices at camera auctions. But, if you want one, you can buy a brand new wide for $5,575 from DHW-Fototechnik GmbH, marketed by Rolleiflex USA. Cool, I want one. 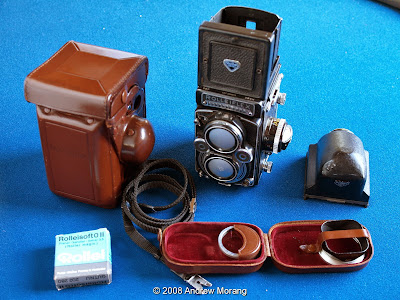 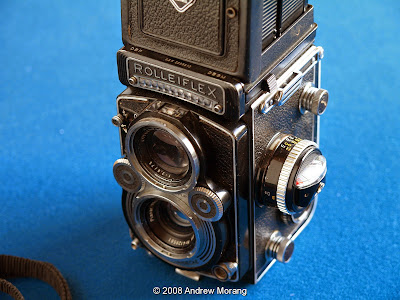 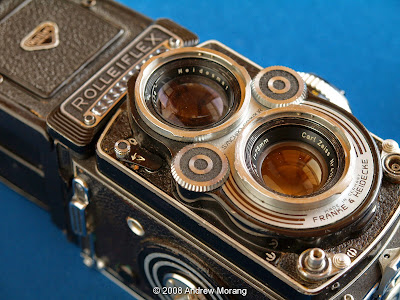 Back to more ordinary models: this was my 3.5F with the Zeiss 5-element Planar lens. I bought it as a real beater in the early 1990s, but the lens was perfect and optical quality amazing. Even the selenium light meter worked, although I usually used an external hand-held meter. The wheels on either side of the lenses control aperture and shutter speed, and are coupled to the light meter. The meter reading is seen in the plastic window next to the focus knob. The late 1960s and 1970s 3.5F models used a 6-element Planar lens or a 5-element Xenotar lens. Both were equal optical quality. 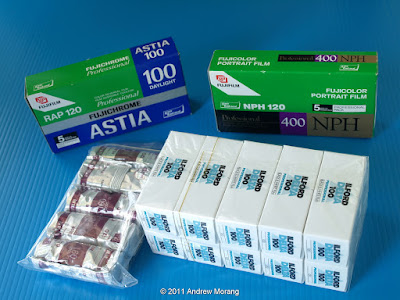 This is an example of some of the film I used in my cameras. The Delta 100 is very fine-grain and shows amazing detail. I still regularly use long-discontinued Kodak Panatomic-X film, one of the finest black and white films ever made. 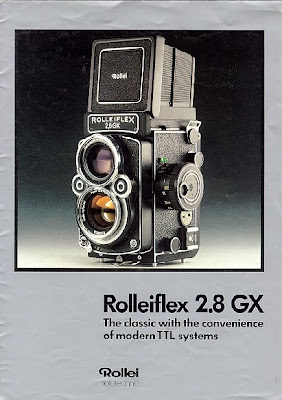 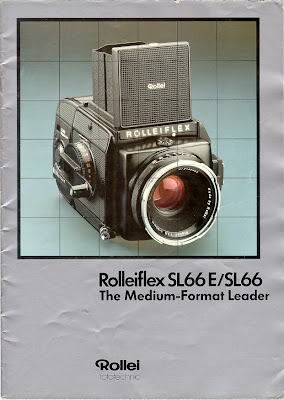 Rollei also made the superb but expensive and complicated single-lens SL66 camera. The lenses were the finest available from Schneider and Zeiss. The SL66 was bulky and heavy, and most US photographers preferred the Hasselblad camera from Sweden. As of 2017, I am not sure if anyone can repair SL66 cameras. When a reflex-type of camera was preferred for studio use, most US photographers used the Mamiya RB67 or RZ67, which were large and bulky, but much less expensive than the SL66. 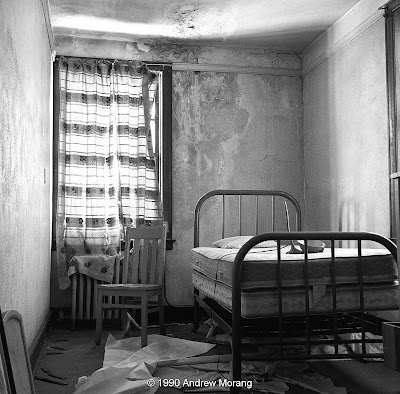 If you see my film-era photographs in a square format, they were taken with one of my Rolleiflexes. This is a residence room in the old YMCA on Clay Street in Vicksburg, Mississippi, taken on Panatomic-X film (I braced the camera on an old bench). 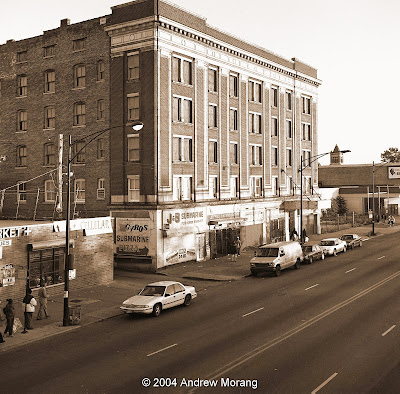 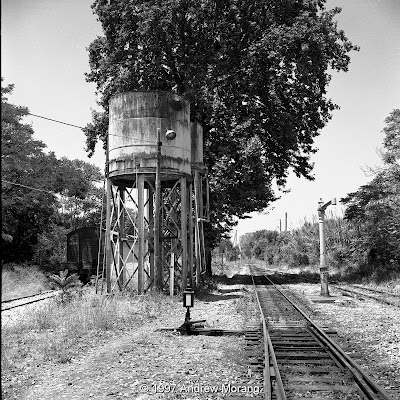 An old-fashioned railroad station in Axaia, in the western Peloponnese of Greece, Tri-X professional film (exp. at EI 250) with green filter.


Have you seen recent pictures of Hollywood royalty? Most paparazzi snaps of movie starlets are terrible because they are taken by tall men with huge digital cameras held at their eye level, so they are looking down at their shorter victims. In contrast, Rolleiflex portraits in the 1940s, 1950s, and 1960s gave a well-proportioned look to their subjects. Rather than the "tall guy using a eye-level digital SLR with a short lady" look, where her head is huge and feet diminish downwards, in a Rolleiflex portrait, the body was centered and evenly-proportioned. Tall men had a somewhat heroic look. Some recent micro 4/3 cameras have a folding LCD screen, and you can hold them at chest level, just like a Rolleiflex. I no longer have my Rolleiflexes, but I often set my digital cameras to the square format to emulate that viewpoint.
Speaking of Hollywood royalty, here is Marilyn Monroe with her Rolleiflex. The photograph was taken by John Vachon in Canada in 1953. Look magazine donated the prints to the Library of Congress in 1971. Another interesting web page with many pictures of celebrities and their cameras is Vintage Everyday.
It looks like Elizabeth Taylor used one, as well. 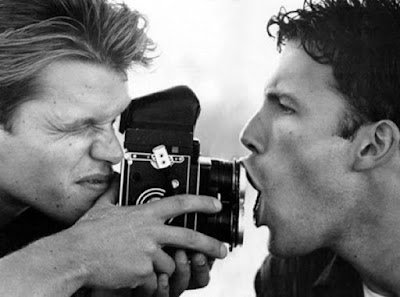 OK, Matt Damon may be a bit too close to focus on Ben's tongue, but you get the idea. It's a tele Rolleiflex! 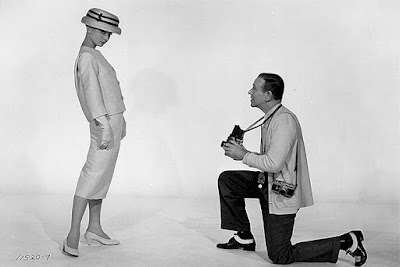 Fred Astaire is just the right distance from Audrey Hepburn in Funny Face (1957). This is a publicity still photograph. I do not remember the Leica being used in the movie, but in several scenes, he is wearing three Rolleiflexes. 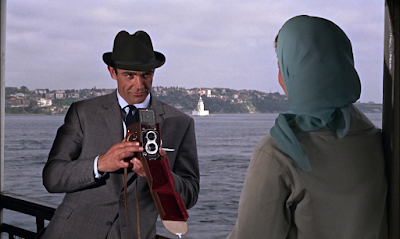 Here we have 007 (Sean Connery) on the ferry boat on the Bosporus, asking the lovely Tatiana Romanova about the Lektor decoding machine. But his Rolleiflex is really a tiny tape recorder (miniaturization 1962 stye). This is a scene from the classic From Russia with Love (1962), one of the best Bond films.

Serious photographers still use the Rolleiflex, and 120-size film is still available. Until recently, you could still buy a brand new 2.8 model with superb multi-coated lenses and a modern built-in light meter, the 2.8GX. Mike Johnston wrote about "The Last Rolleiflex" in The Online Photographer.


Update June 2016: I have been using black and white film more and more and bought another Rolleiflex. Of course I should have never sold my earlier ones, typical dumb decision. Some first tests with Tri-X film in Vicksburg are here (click the link). Prices for clean late-model Rolleiflexes are rising steeply as on 2016-2017. 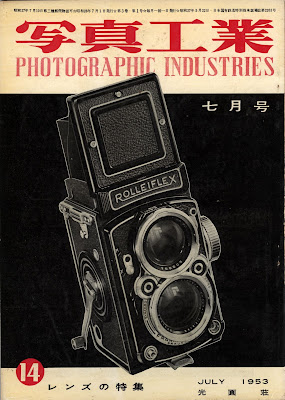 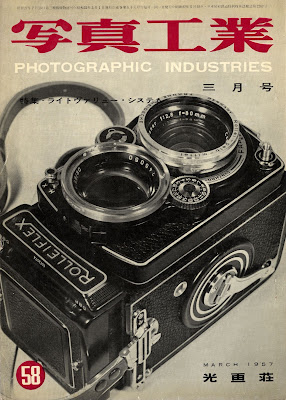 Addendum July 2019: Here is a famous lady with the gold-plated commemorative version of the wonderful and clever little Rollei 35 camera. Readers, you know the identity of this lady.....