Black and White in Chicago

In March of 1914, Carl Sandburg penned a famous poem in Poetry about Chicago:


Hog Butcher for the World,
Tool Maker, Stacker of Wheat,
Player with Railroads and the Nation's Freight Handler;
Stormy, husky, brawling,
City of the Big Shoulders:
Chicago today is no longer the world's hog butcher, but it still is the nation's freight handler and a city of big shoulders, with a stunning lakefront and ambitious proud architecture. Let us take a short tour from east to west, starting at the sophisticated shore of Lake Michigan and proceeding to the northwest suburbs. 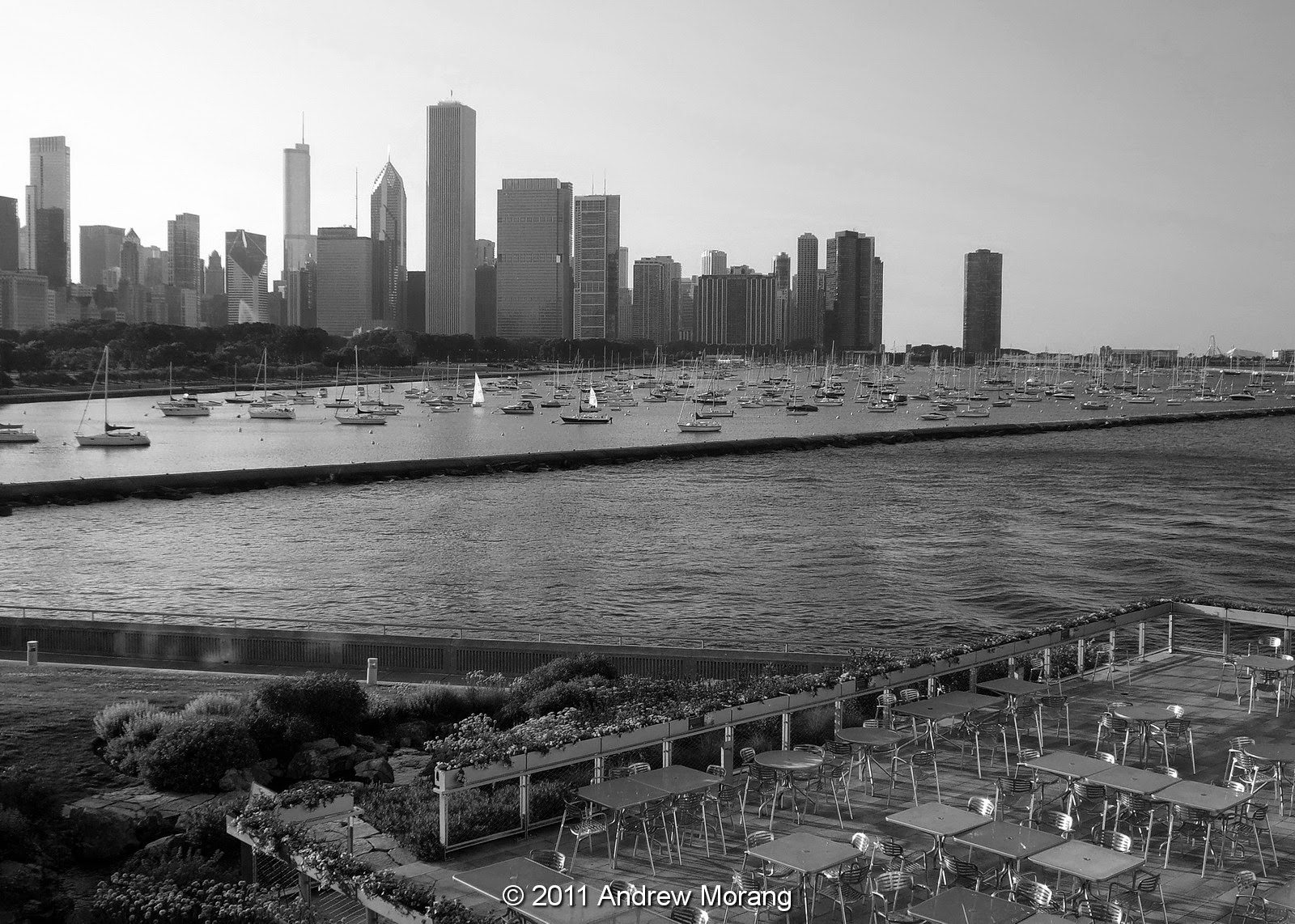 First, a gorgeous sunset view of the skyline, taken from the Shedd Aquarium, where I was attending a private reception. You can rent the aquarium if you want to host an event. They will feed the otters for you (totally adorable. The park in the distance beyond the marina is Millennium Park. 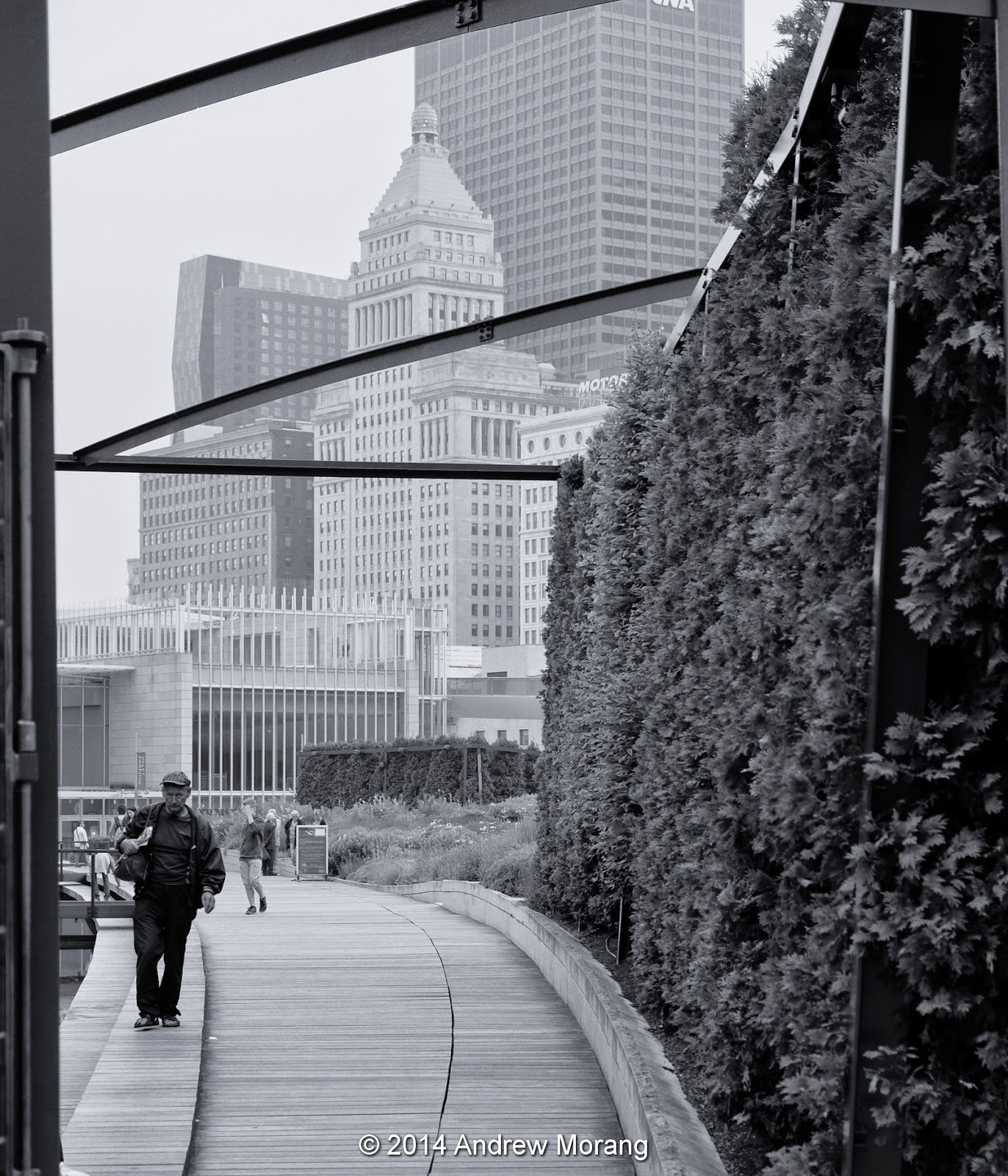 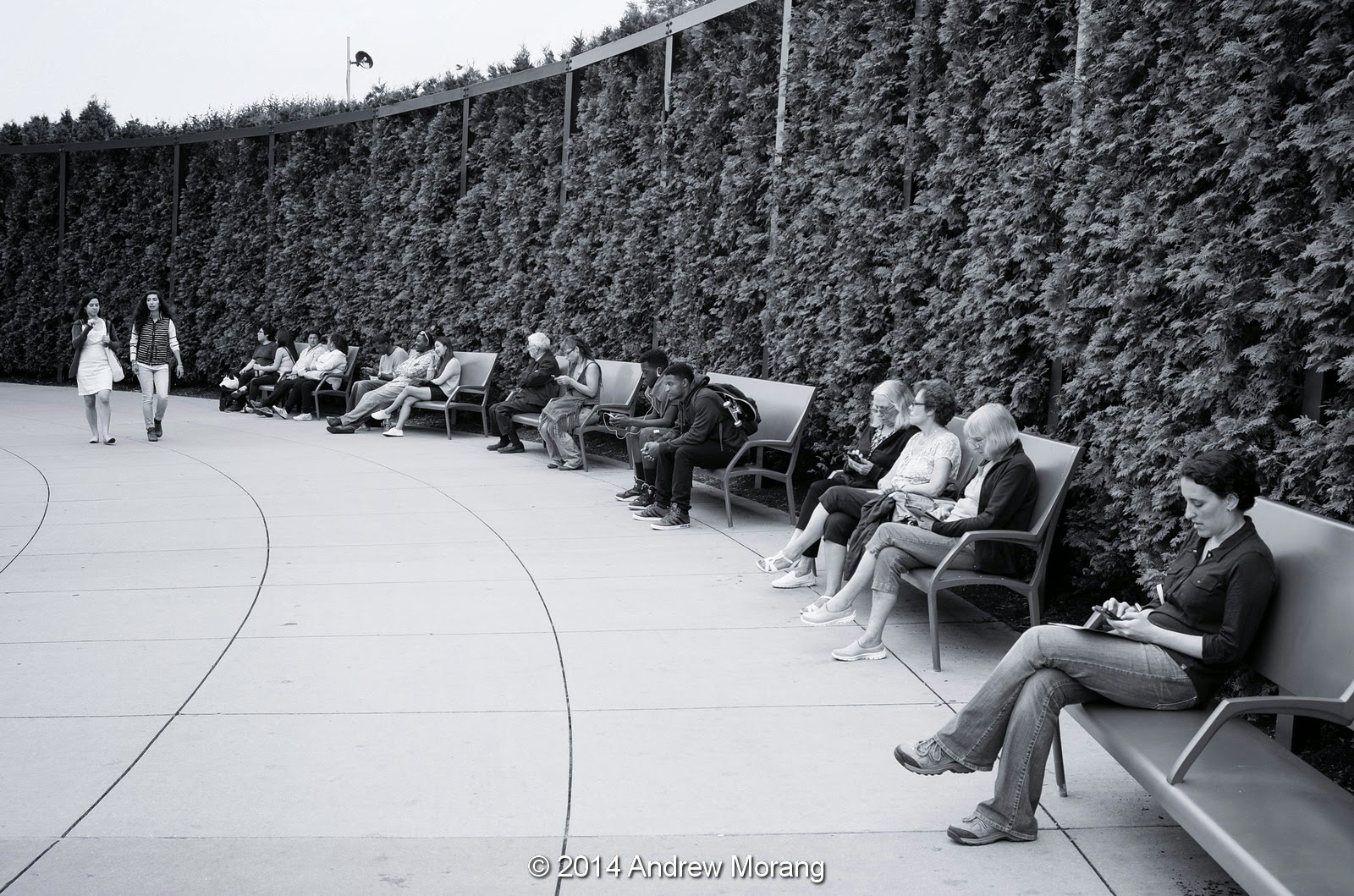 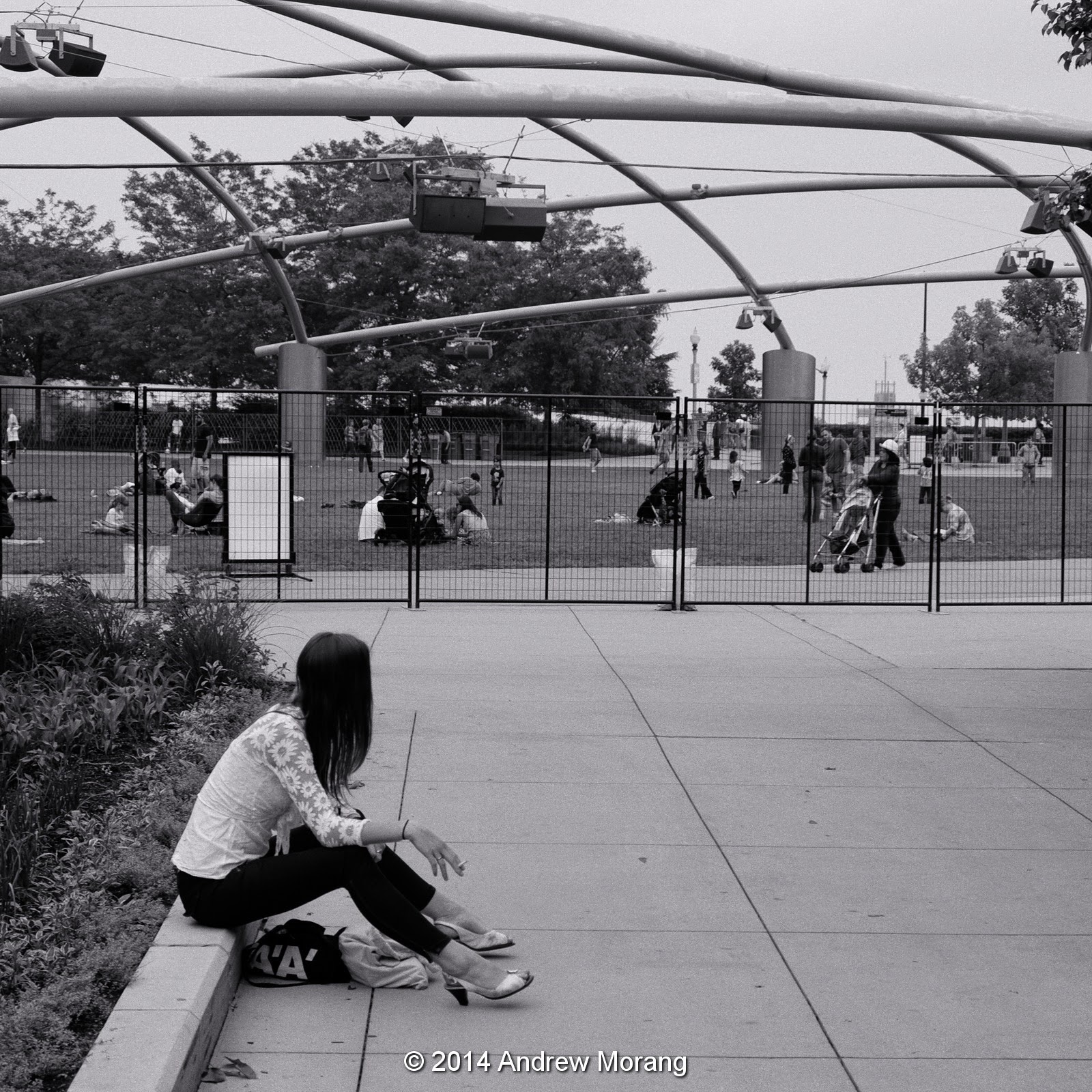 Millennium Park is an oasis of grass, trees, and breezes when you emerge from the skyscraper jungle. The silver tubes are part of the Pritzker Pavilion, where concerts are held throughout the summer. 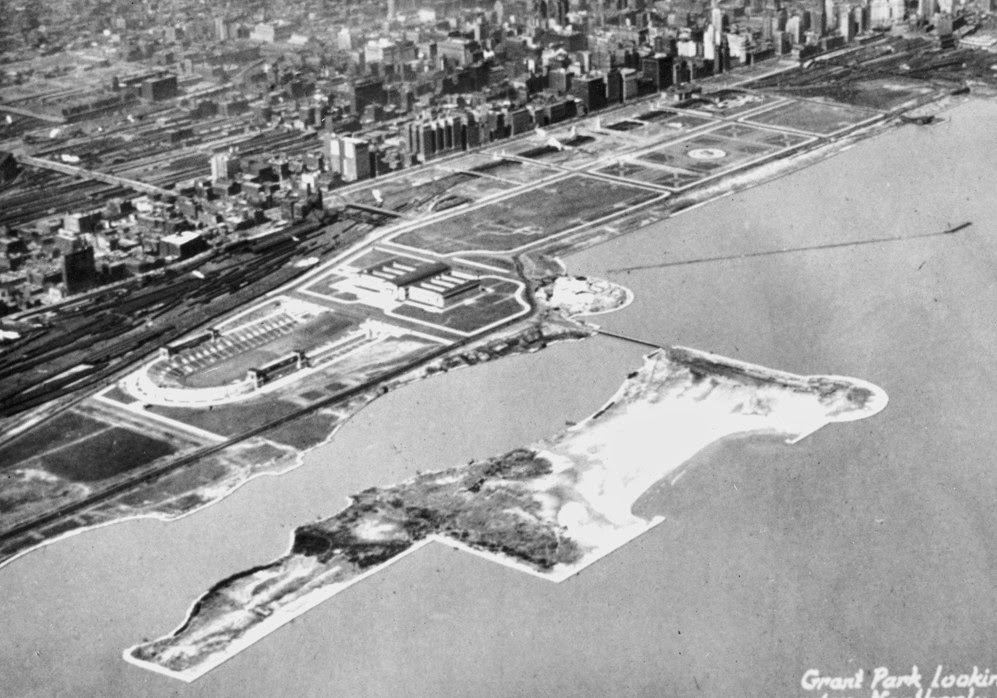 Much of this land along the lake is fill, built during the grand reconstruction of the lakefront from the 1920s through the 1940s. This was part of the implementation of the Burnham Plan, the popular name for the ambitious 1909 Plan of Chicago, co-authored by Daniel Burnham and Edward H. Bennett. This 1929 aerial photograph shows construction of Northerly Island, with Grant Park in the upper right (photograph from U.S. Army Corps of Engineers). All the flat land is mechanically-placed fill. The Shedd Aquarium is the domed building in the center, the location from where I took the first photograph in this article. 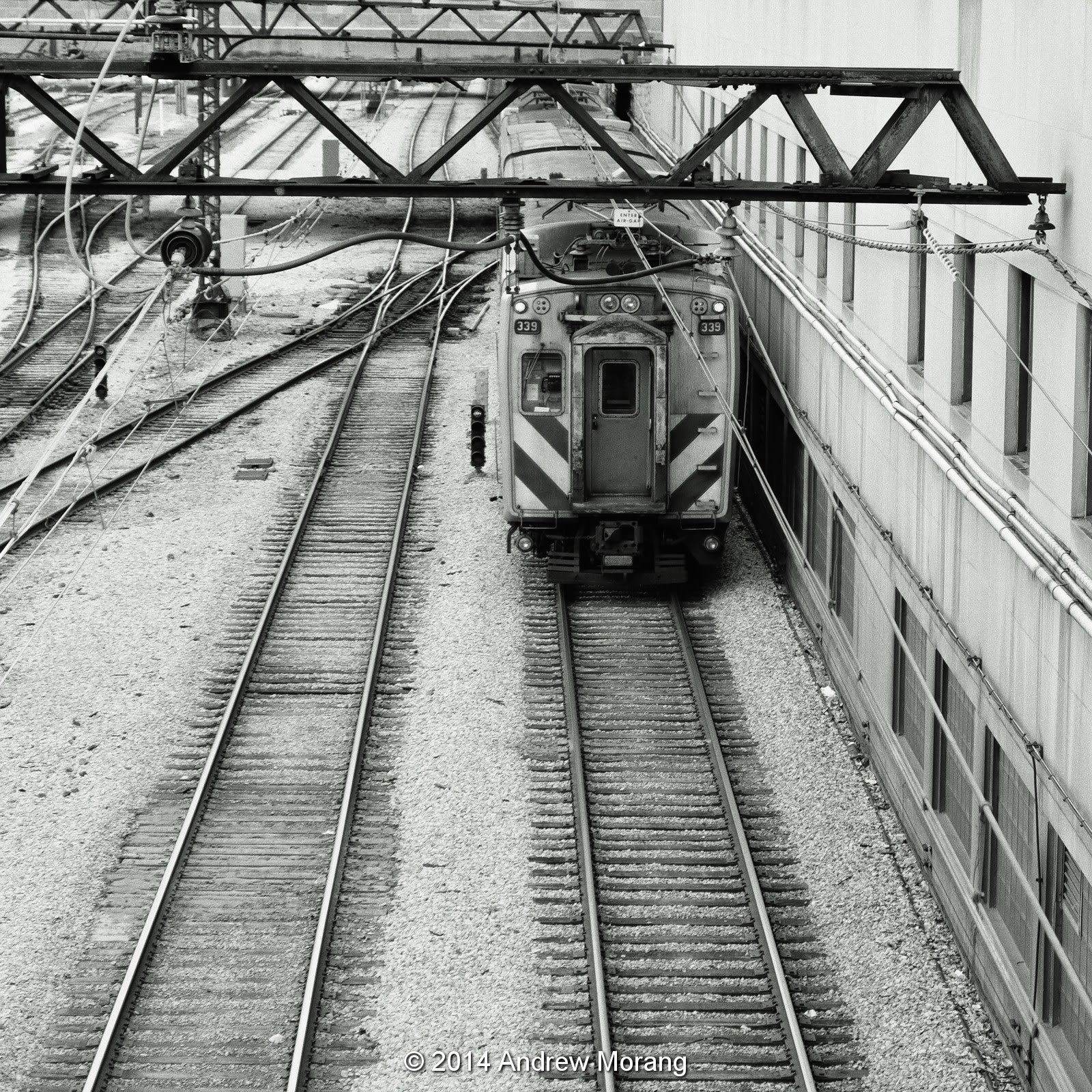 I wrote earlier how Chicago is a rail hub. These are the Metra commuter tracks running literally next to the Art Institute of Chicago. These trains run south and east into Indiana. 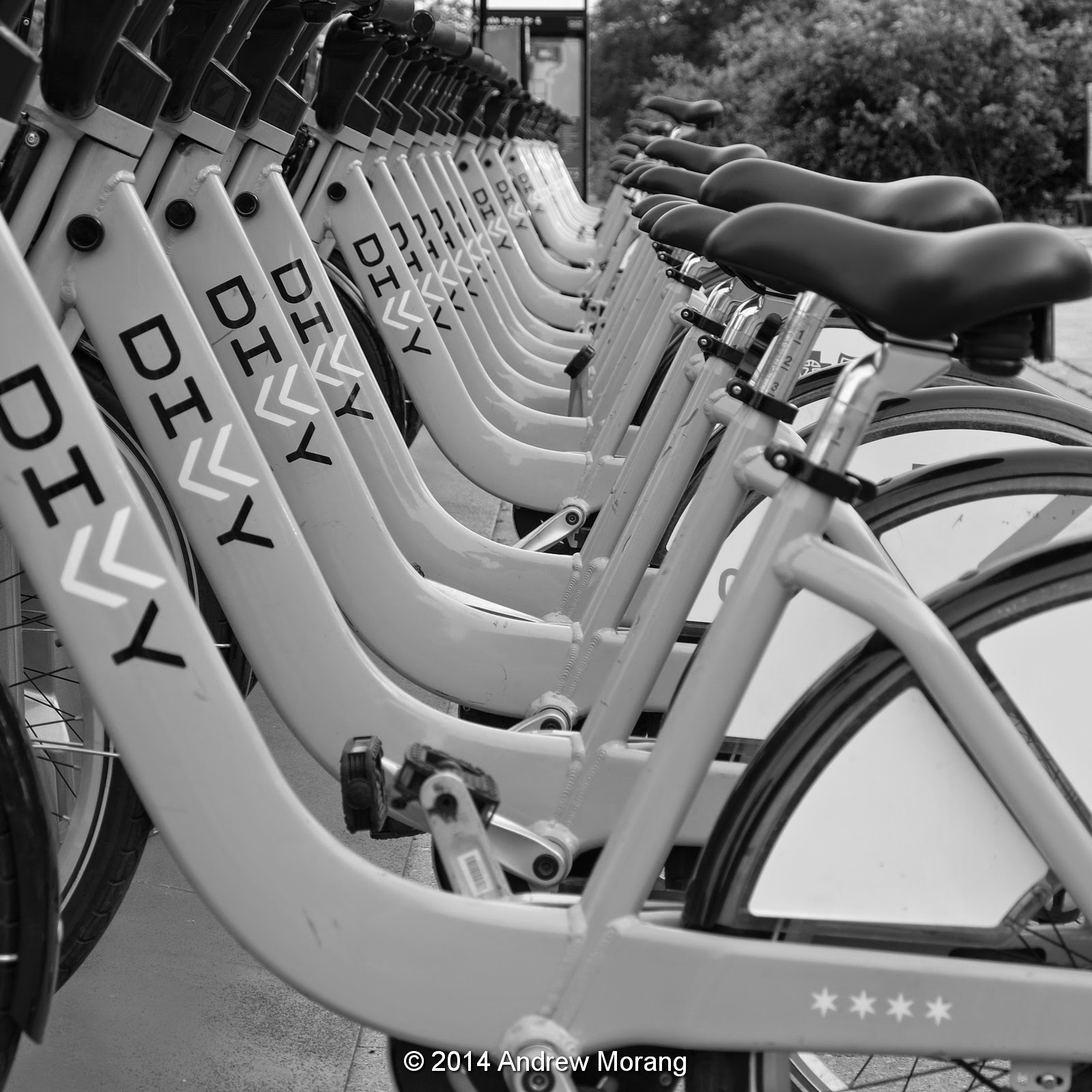 These are the Divvy bicycles that you rent at one station and can deposit at another location. The Mayor got the idea during a visit to Paris. The Divvy plan started in Chicago in 2013. 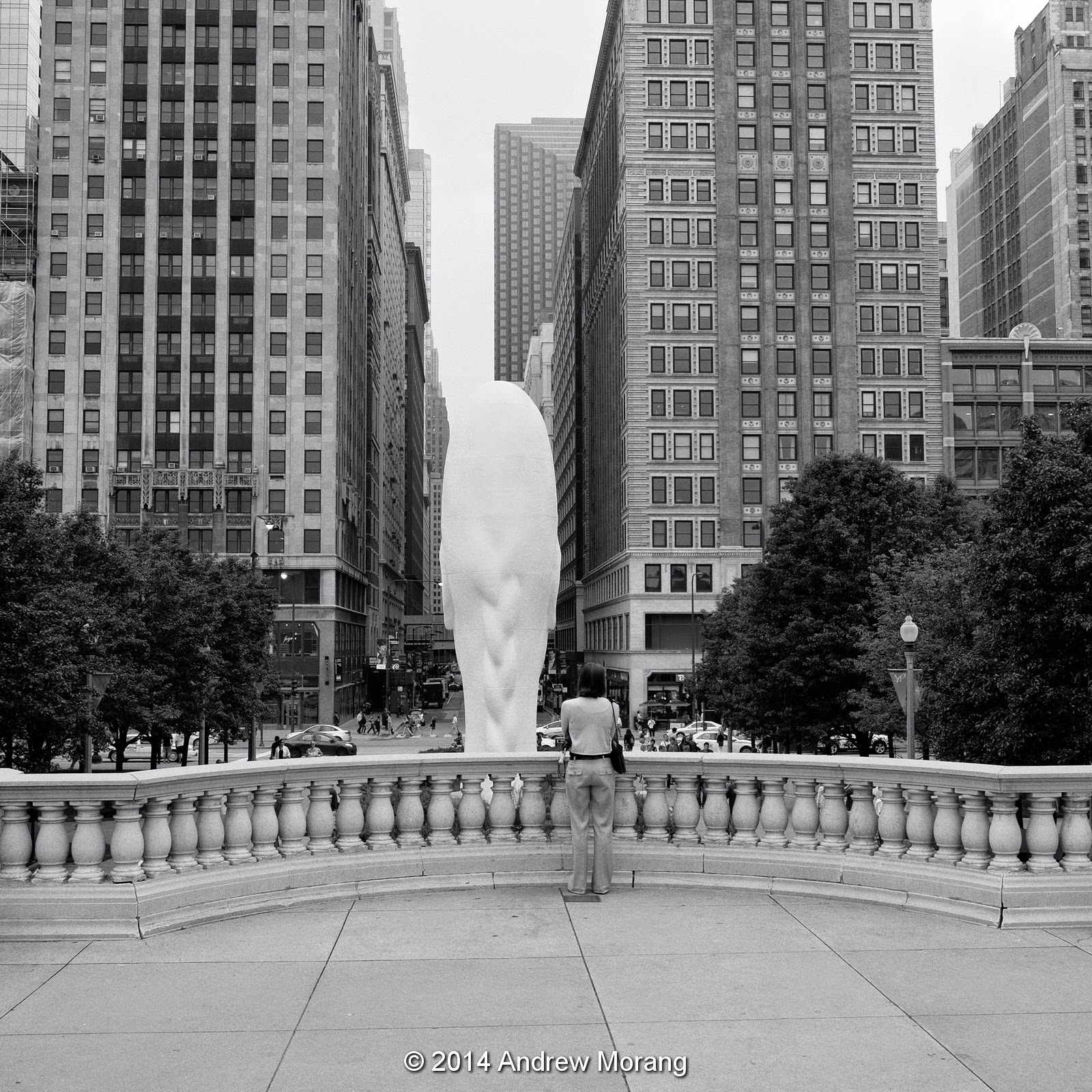 Look west towards the city, and you see the thin lady statue. 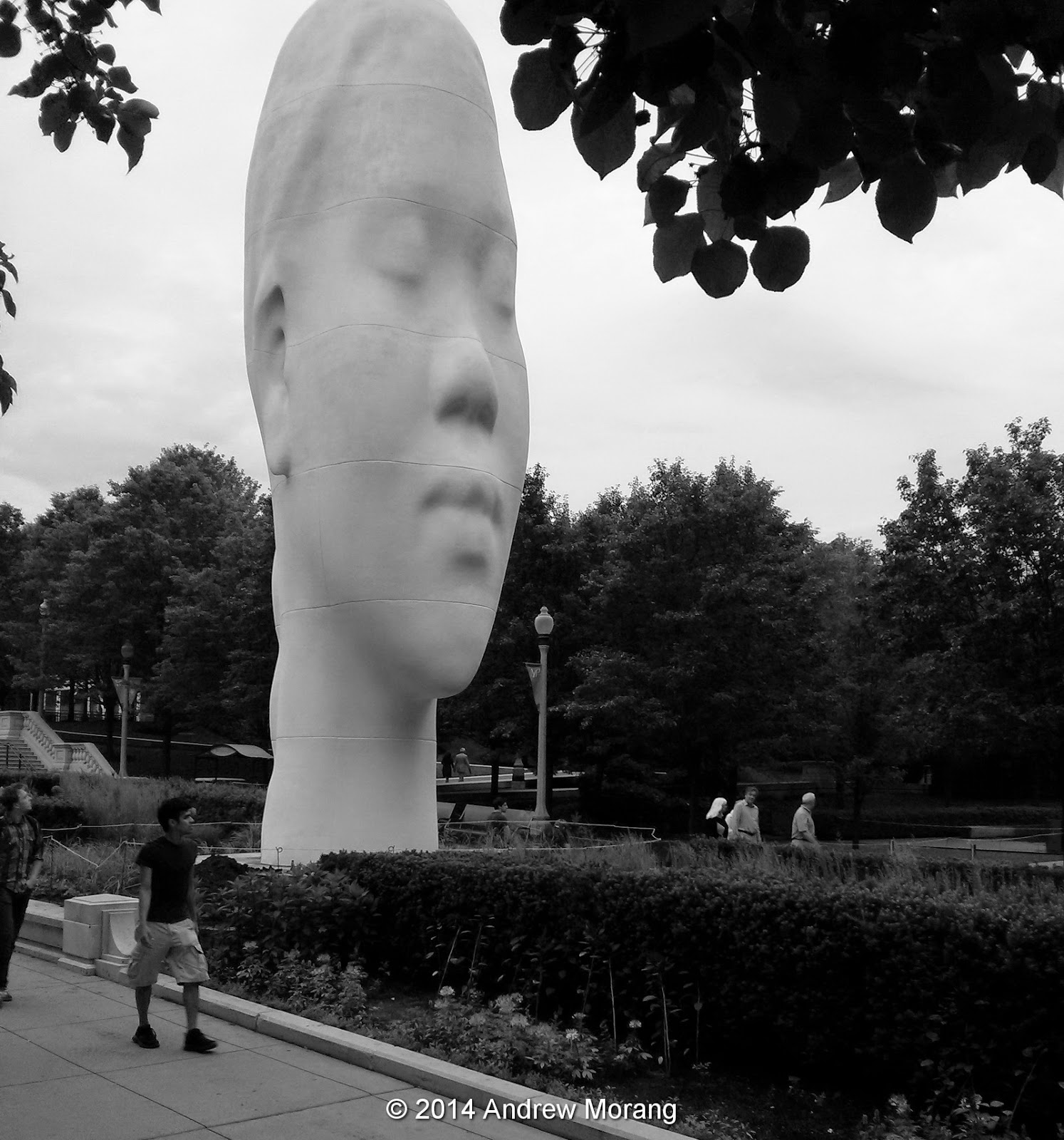 She resembles the thin lady I saw in Venice last summer - possibly the same artist? 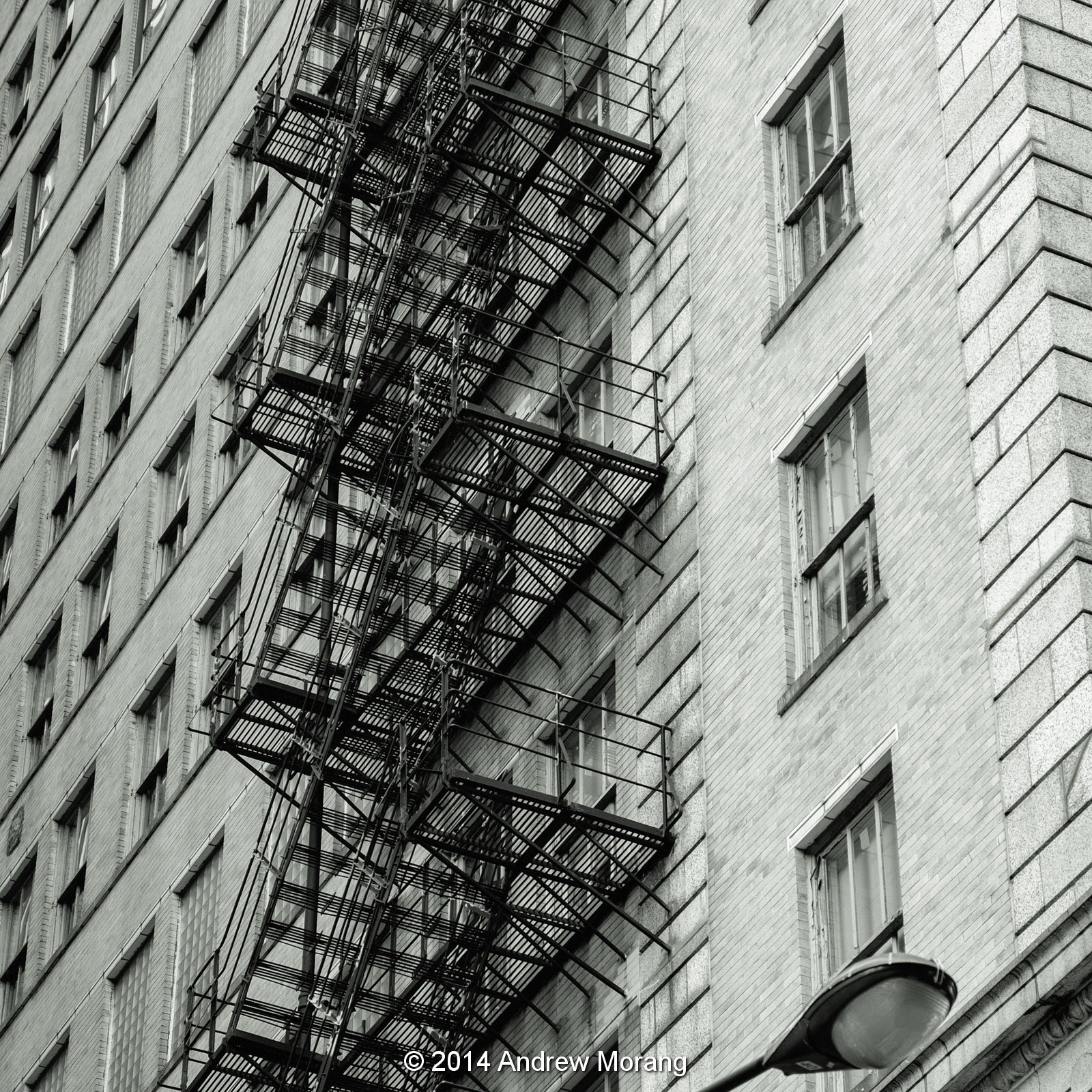 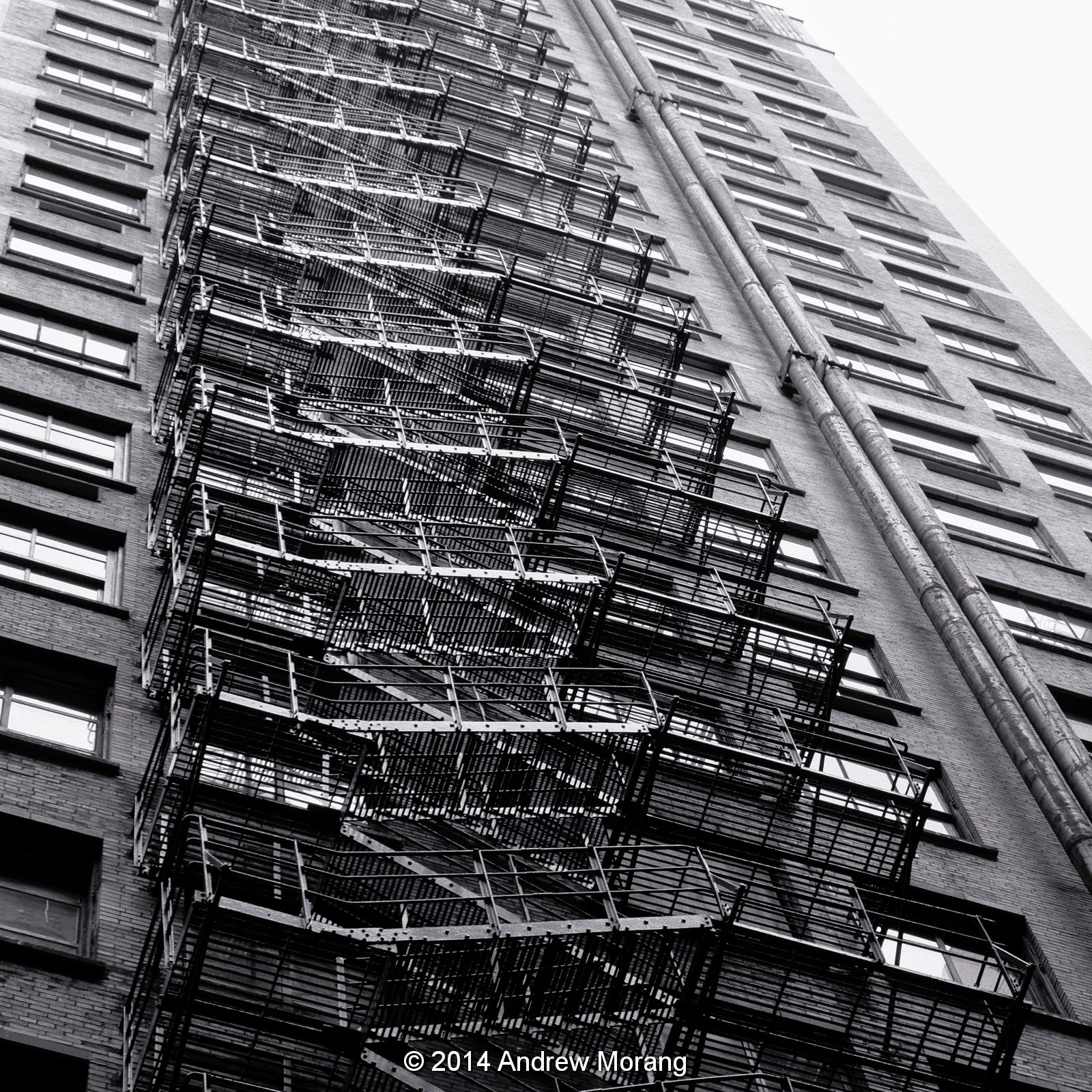 Start walking west on East Adams, and you see interesting geometric patterns in the fire escapes. 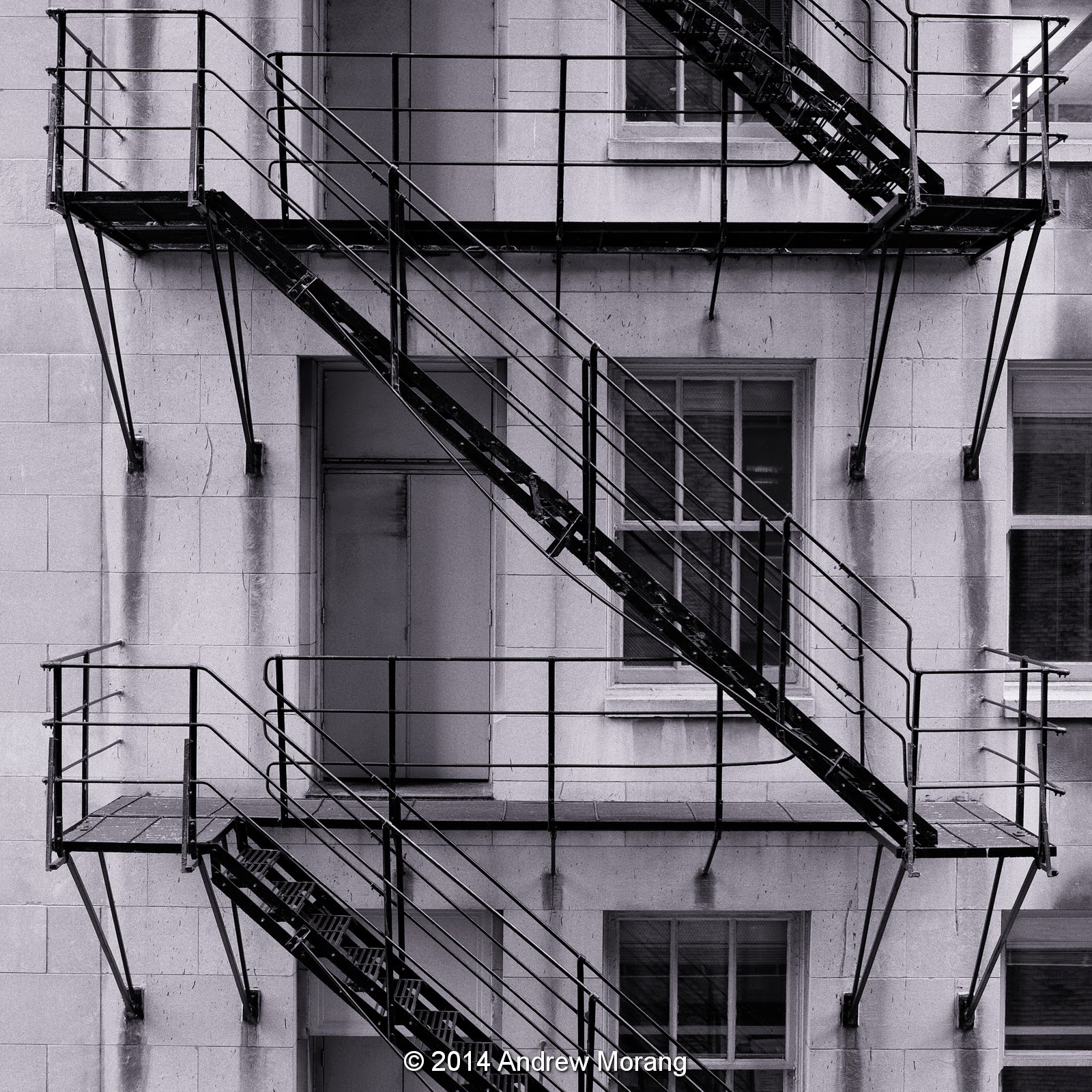 This escape was directly across West Quincy Street (really just an alley) from my hotel window. So I did have a view. 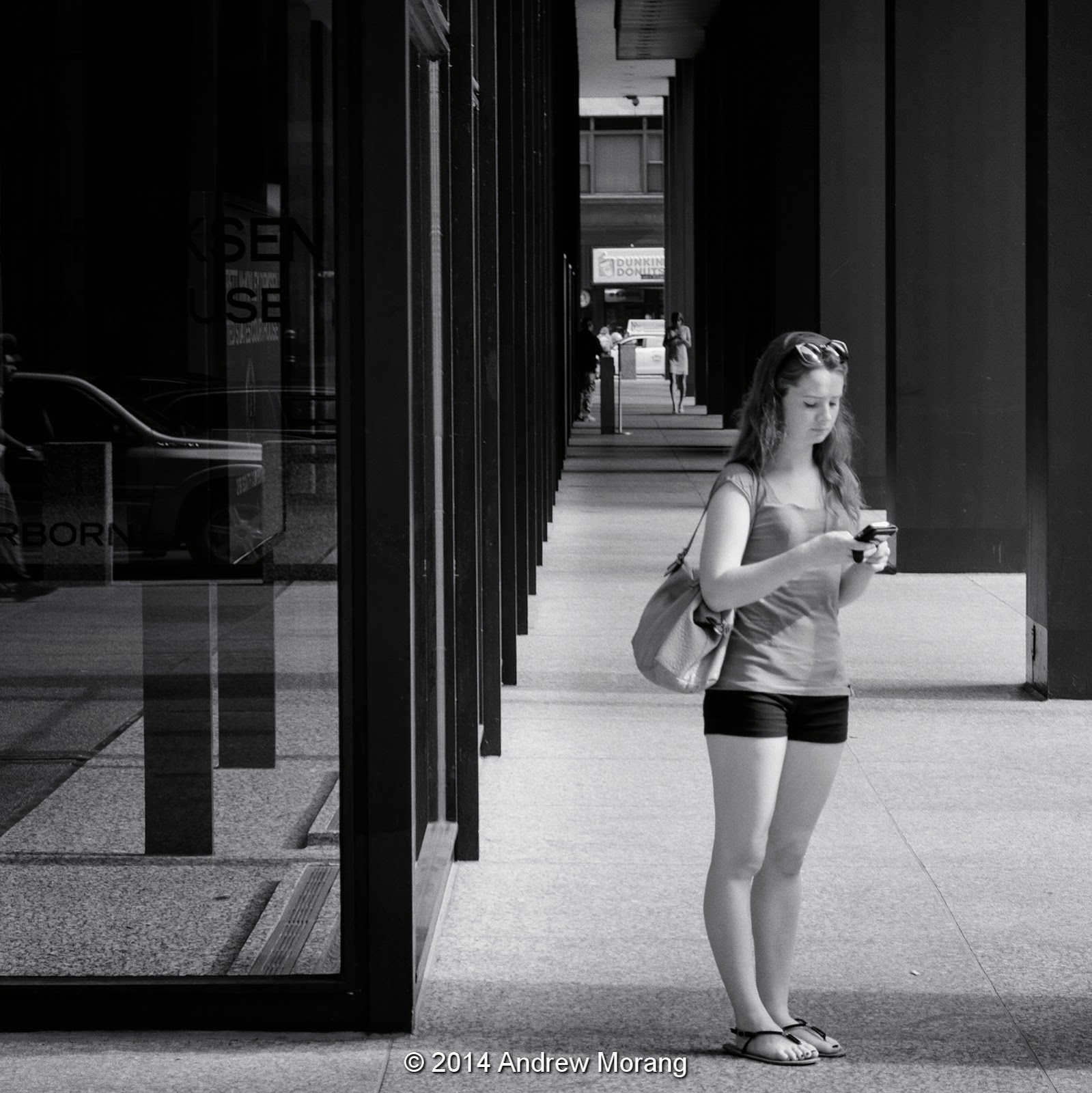 The city has plenty of trendy young people - all checking with their phones. Isn't the activity of the city enough? 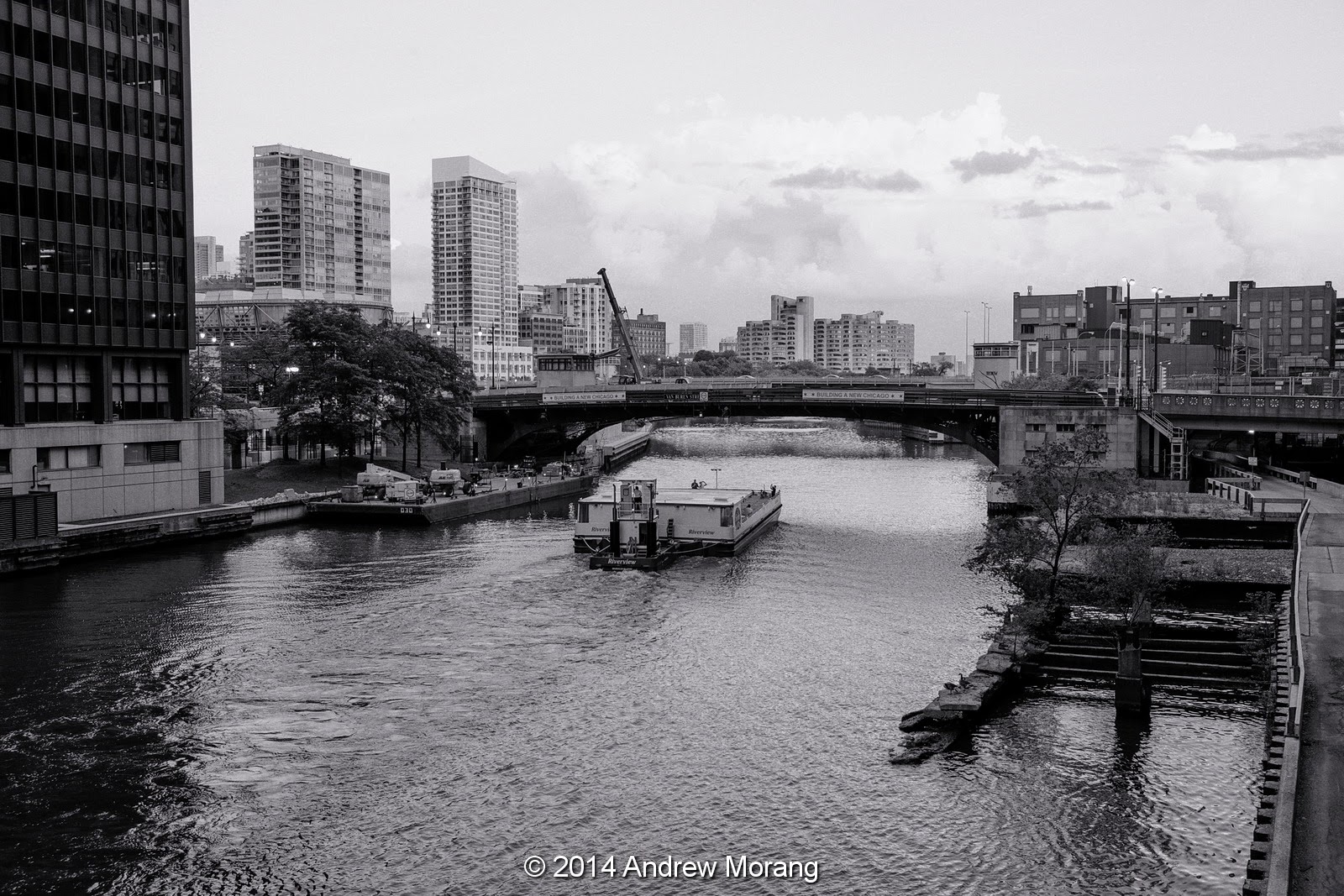 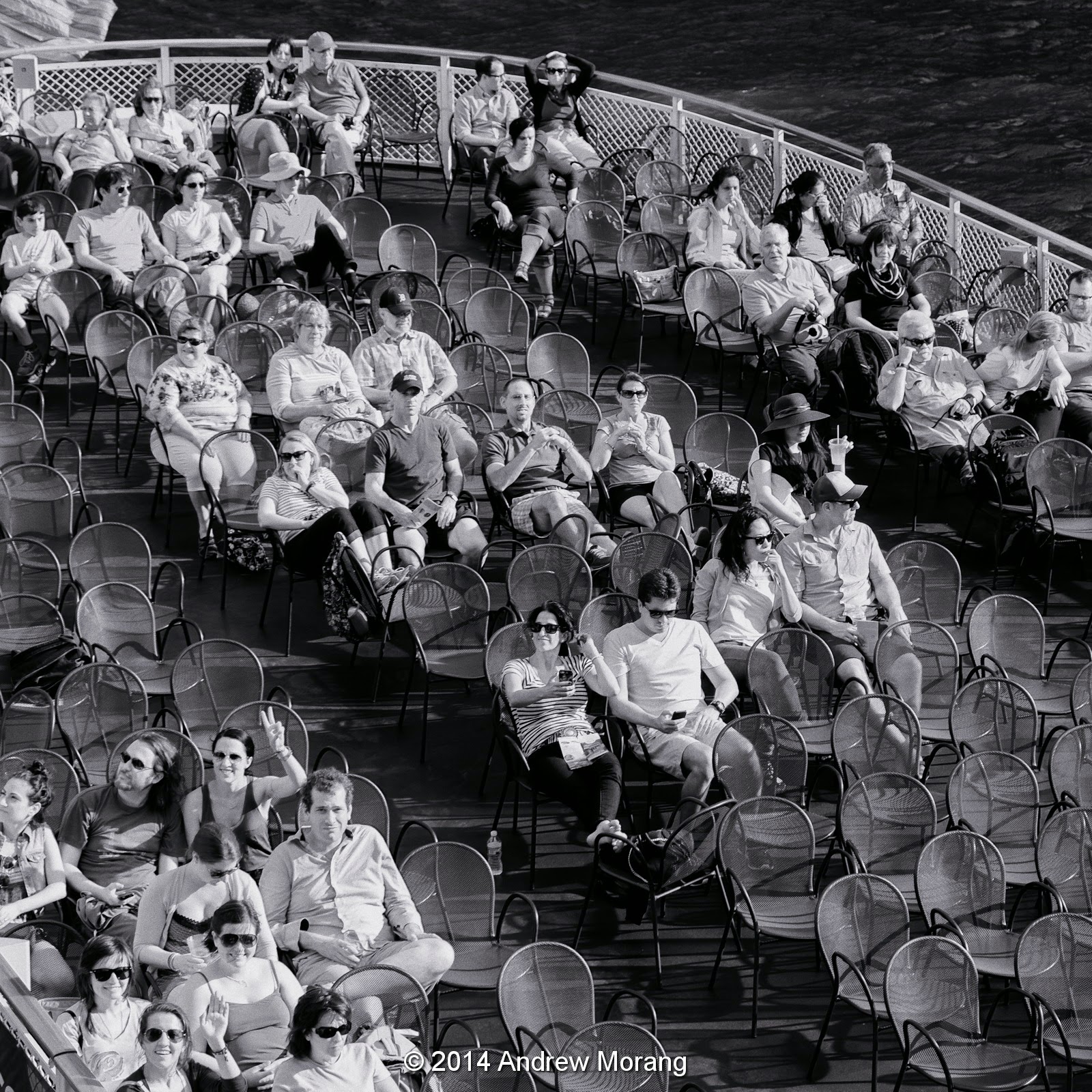 Continue west on West Adams and you cross the Chicago River. This is a Federal navigation project and there is still some barge traffic on it. During the day, tourist excursion boats and water taxis ferry people about. 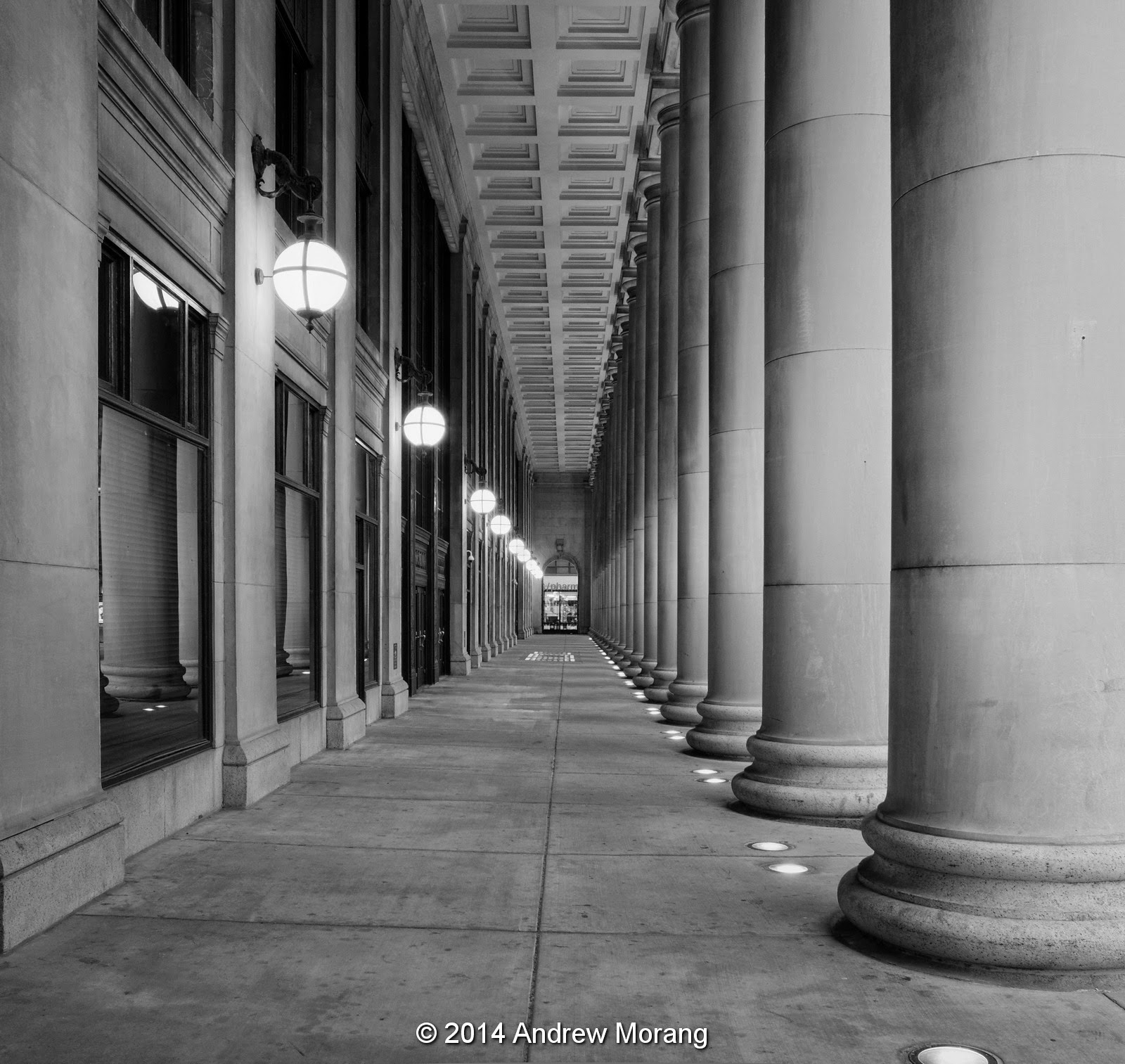 Continue a block west and you reach the monumental Chicago Union Station. This huge Beaux-Arts-style building with massive Corinthian columns opened in 1925, replacing an 1881 station at the same site. This was built near the end of the era when railroads were the most powerful and rich corporations in America. But even then, automobiles were carrying more and more people, and by the opening of World War II, most US passenger railroads were running at a loss. The Chicago Union Station is still the 3rd busiest rail terminal in the United States, and, according to Wikipedia, handles about 120,000 passengers on an average weekday. 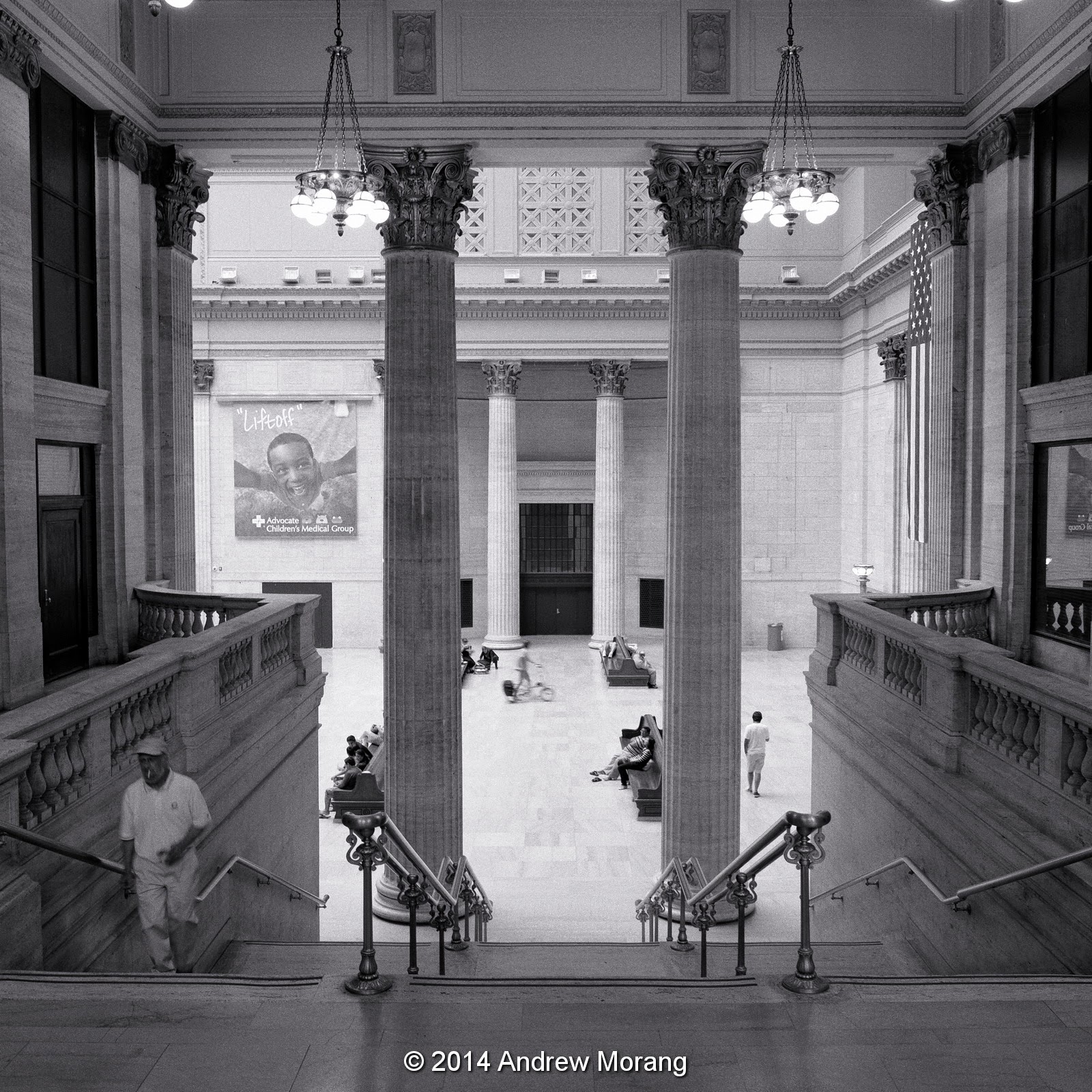 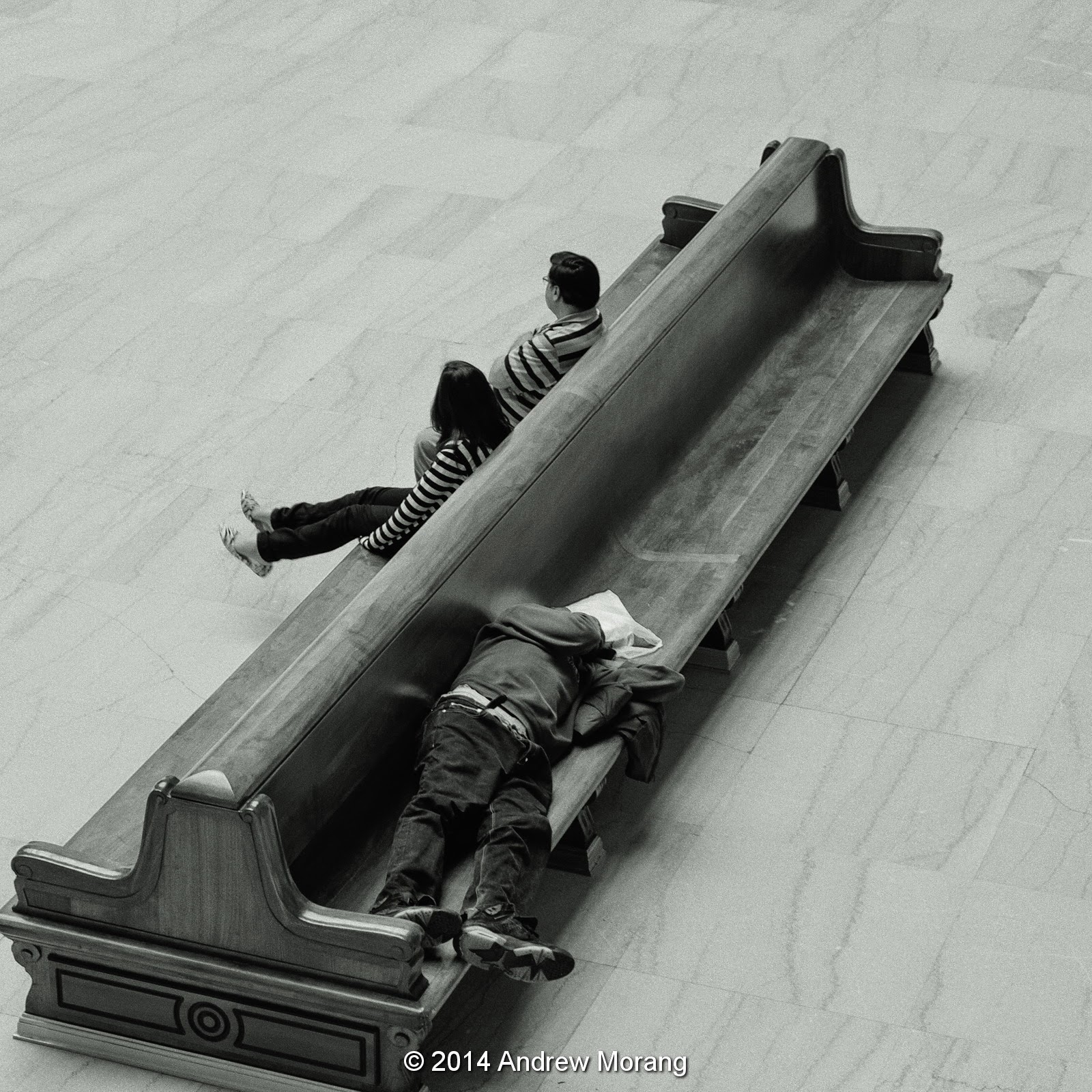 The monumental Great Hall is a 110-foot (34 m)-high atrium capped by a large barrel-vaulted skylight. Once, thousands of commuters and long-distance travelers passed through this hall daily. Smaller spaces contain restaurants and services, and various passageways lead off the Hall. 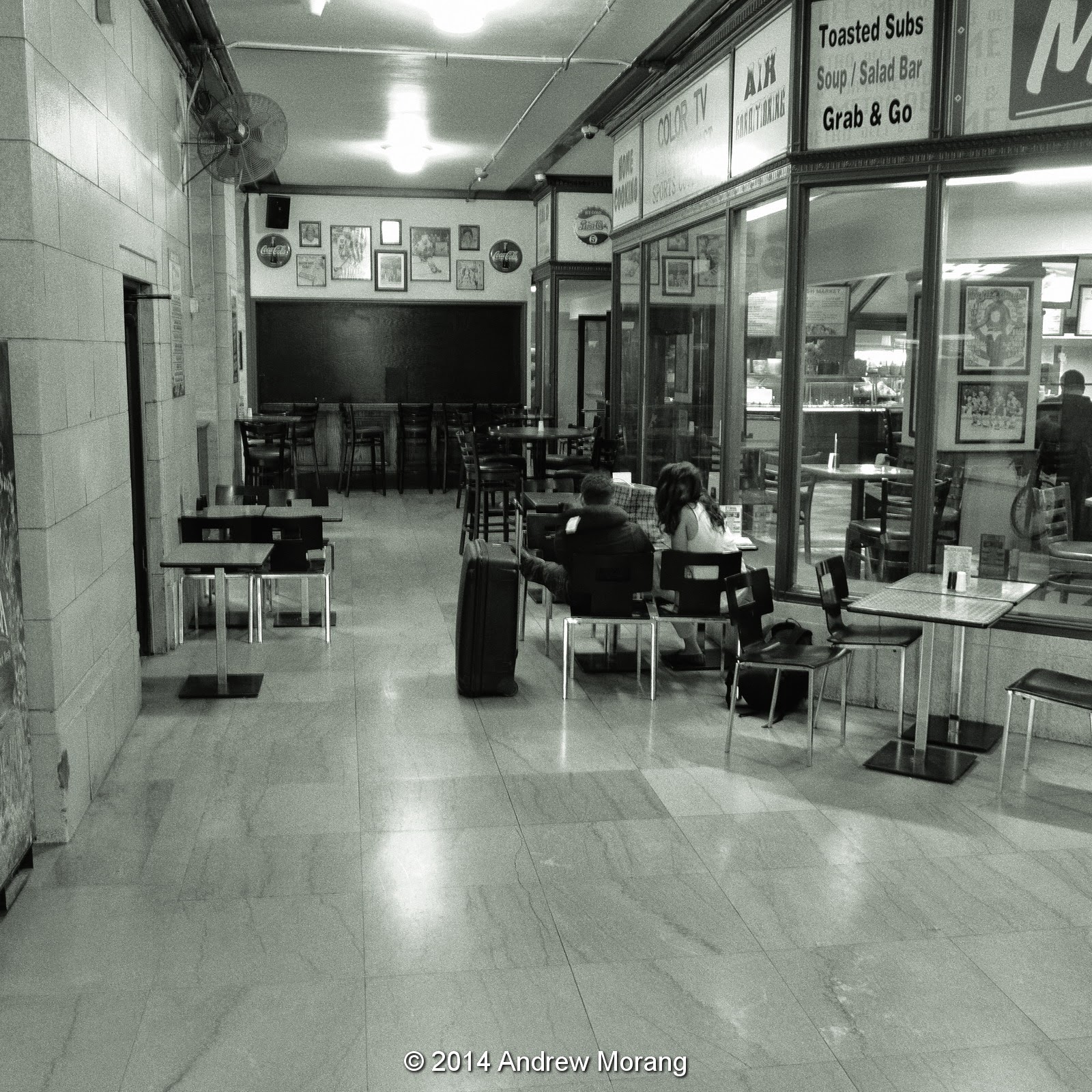 One of the subterranean buffets might have been lifted from a 1940s movie set.

Walk way down and you reach the tracks. They parallel the Chicago River. Years ago, I took the Amtrak sleeper to Mississippi, and it pulled out of Union Station and took a convoluted route, following the Metra lines south past Hyde Park. The complicated route underscored how much train infrastructure exists in Chicago. 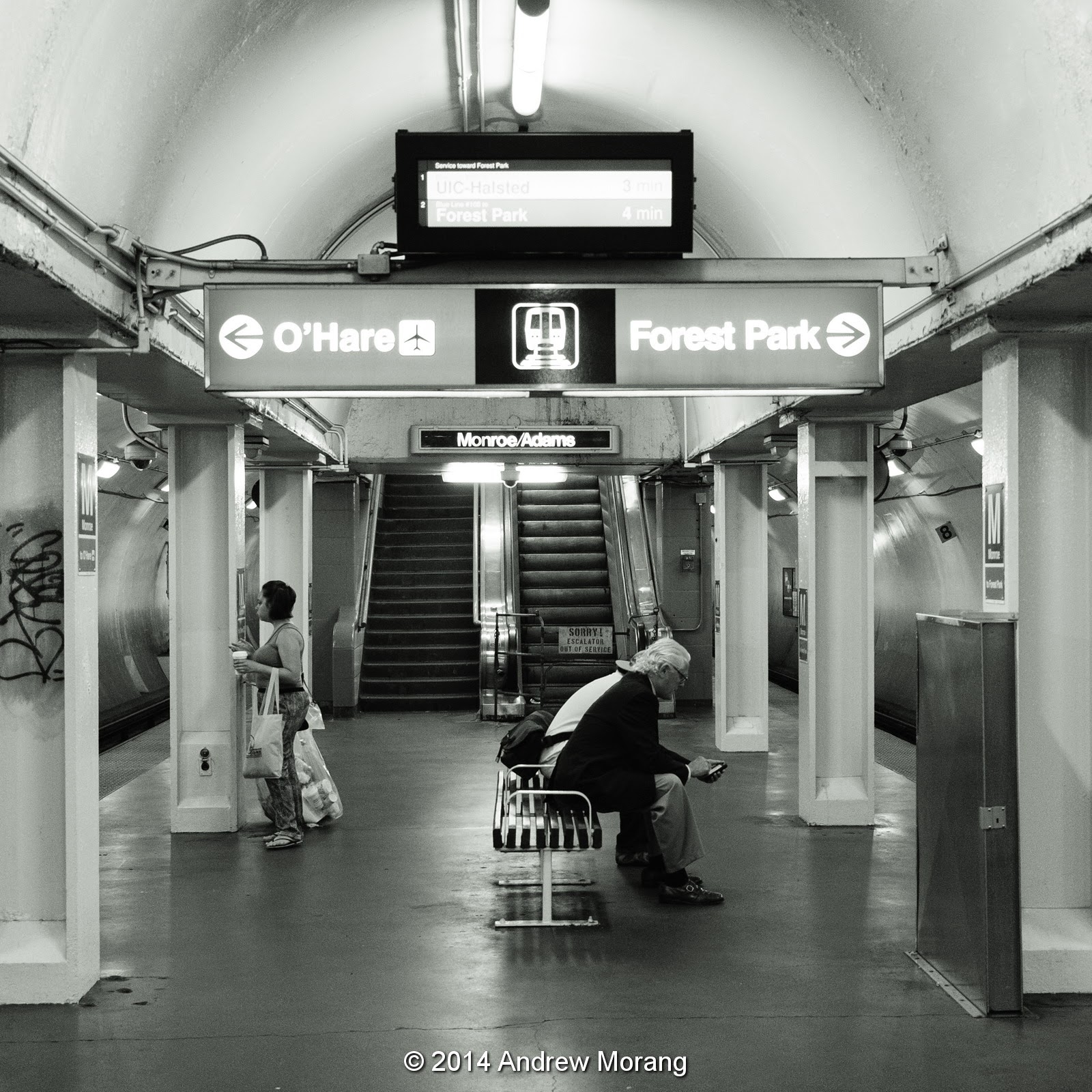 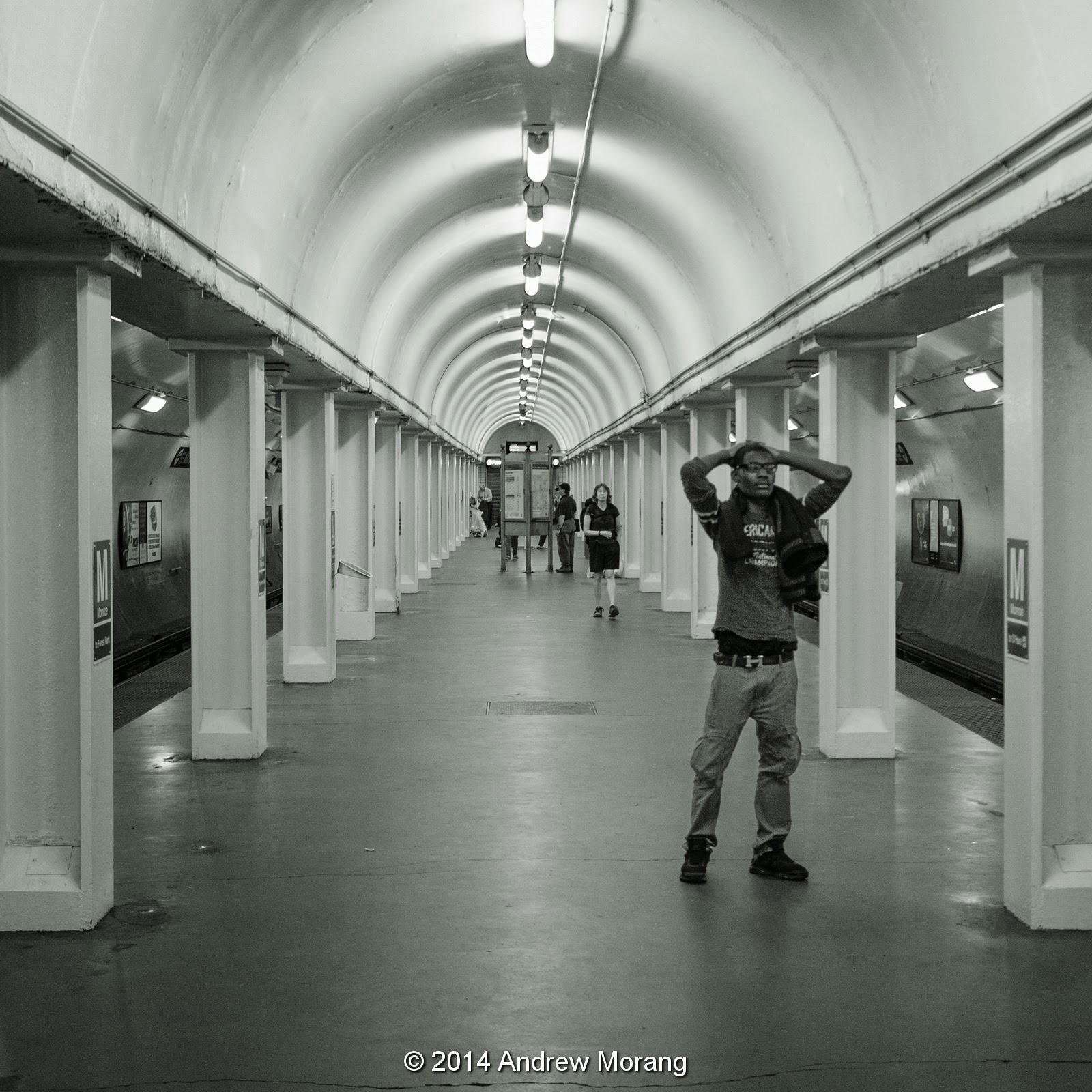 Let's take the subway to O'Hare Airport. This is the Blue Line station on Monroe. It is called the "L", but is underground here. 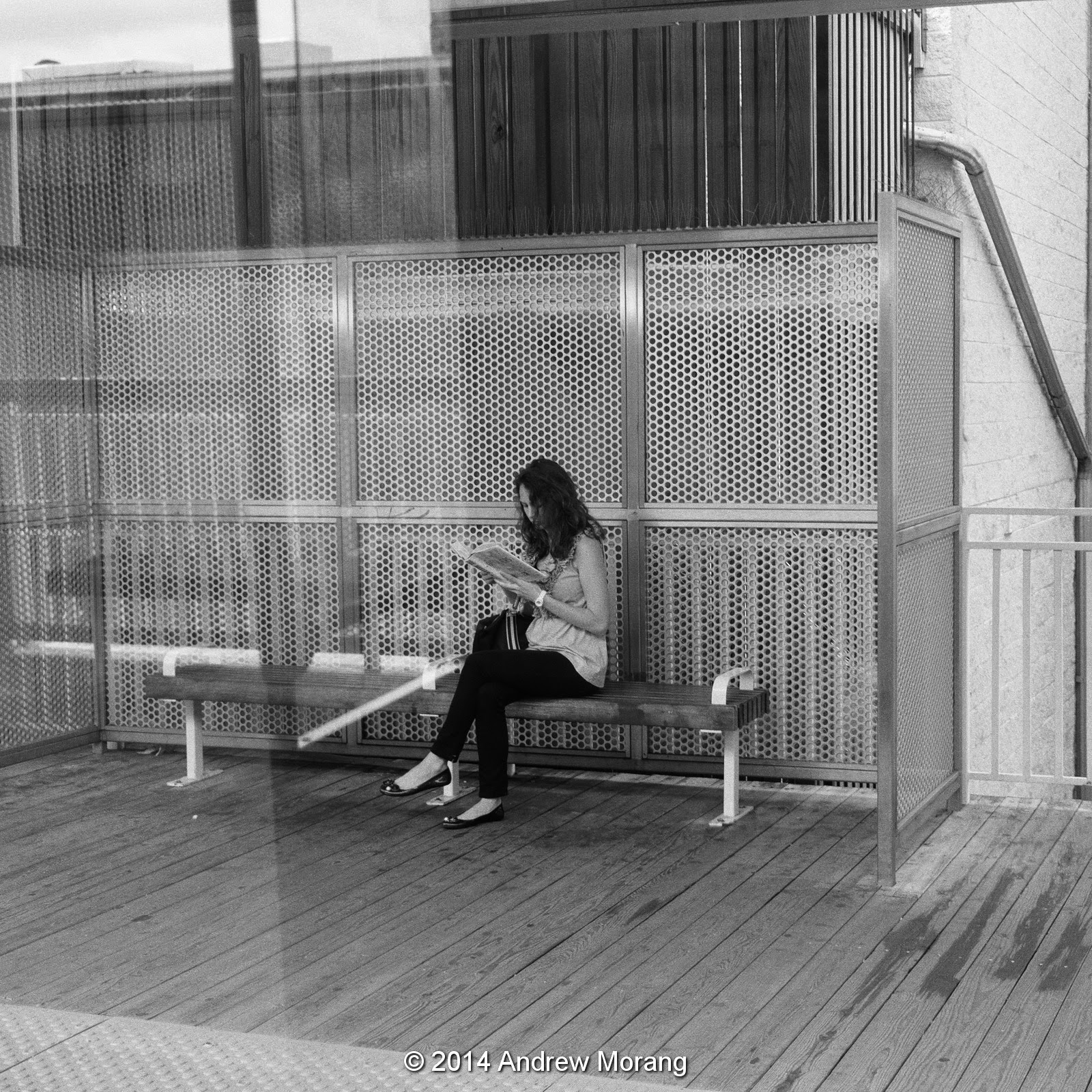 As the L reaches the suburbs, it is elevated. This is the Damen station. 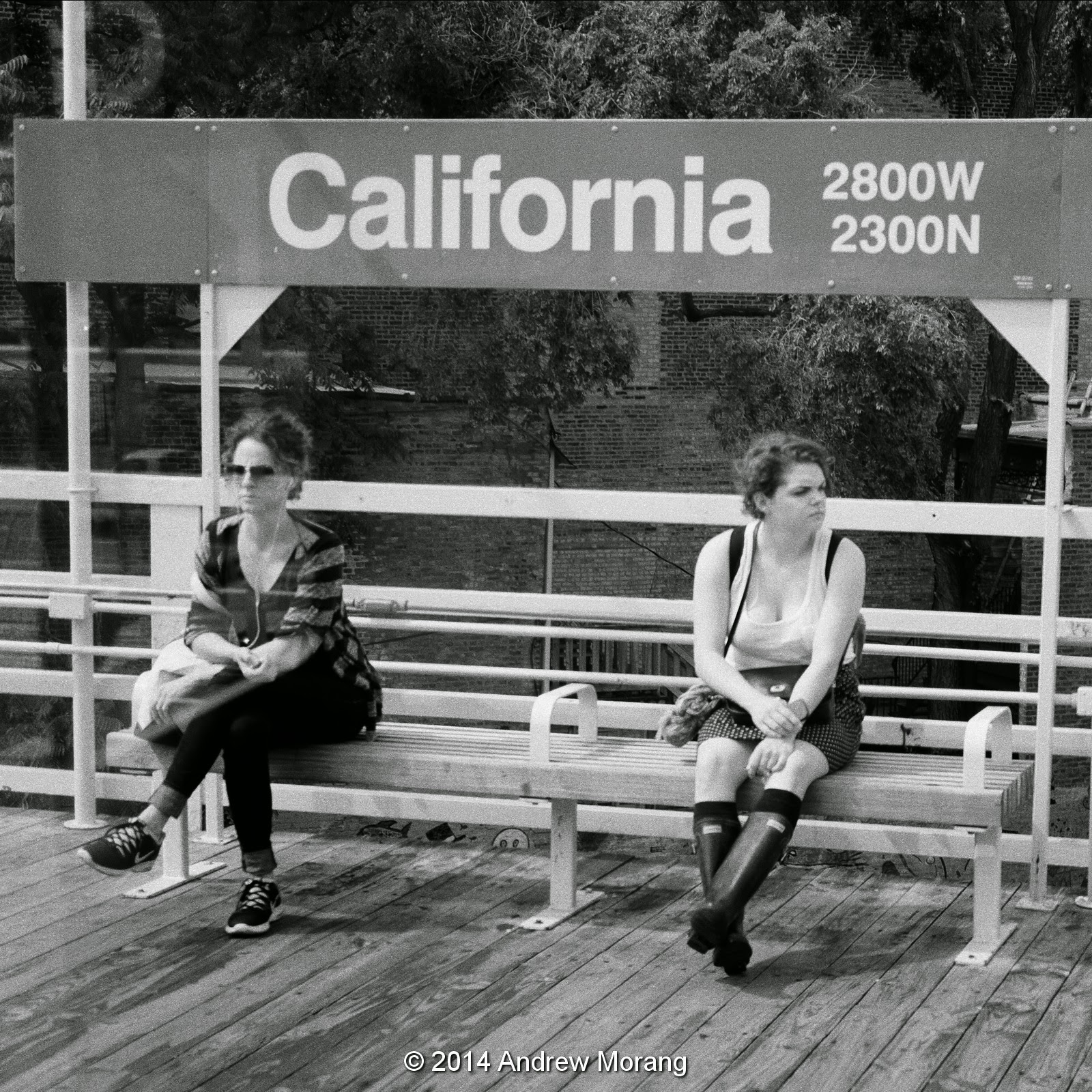 And this is the California station. 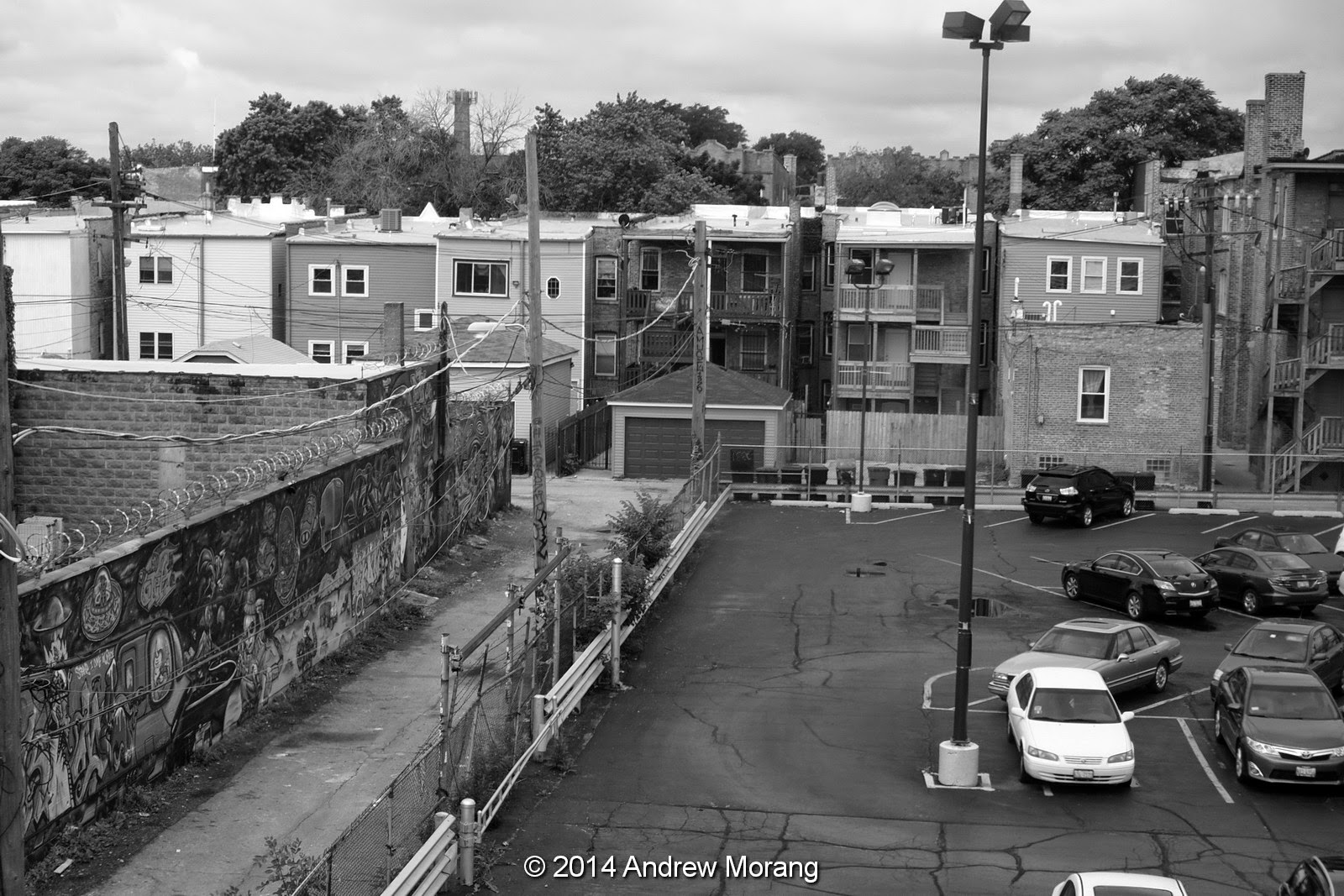 The view from the L shows the nature of many of the inner suburbs: 2- and 3-floor row houses built in the 1920s-1940s at modest cost - designed to house workers in a growing industrial city. My 2012 article on South Chicago shows another working-class neighborhood. Triple-deckers in Chelsea and other suburbs of Boston are similar. 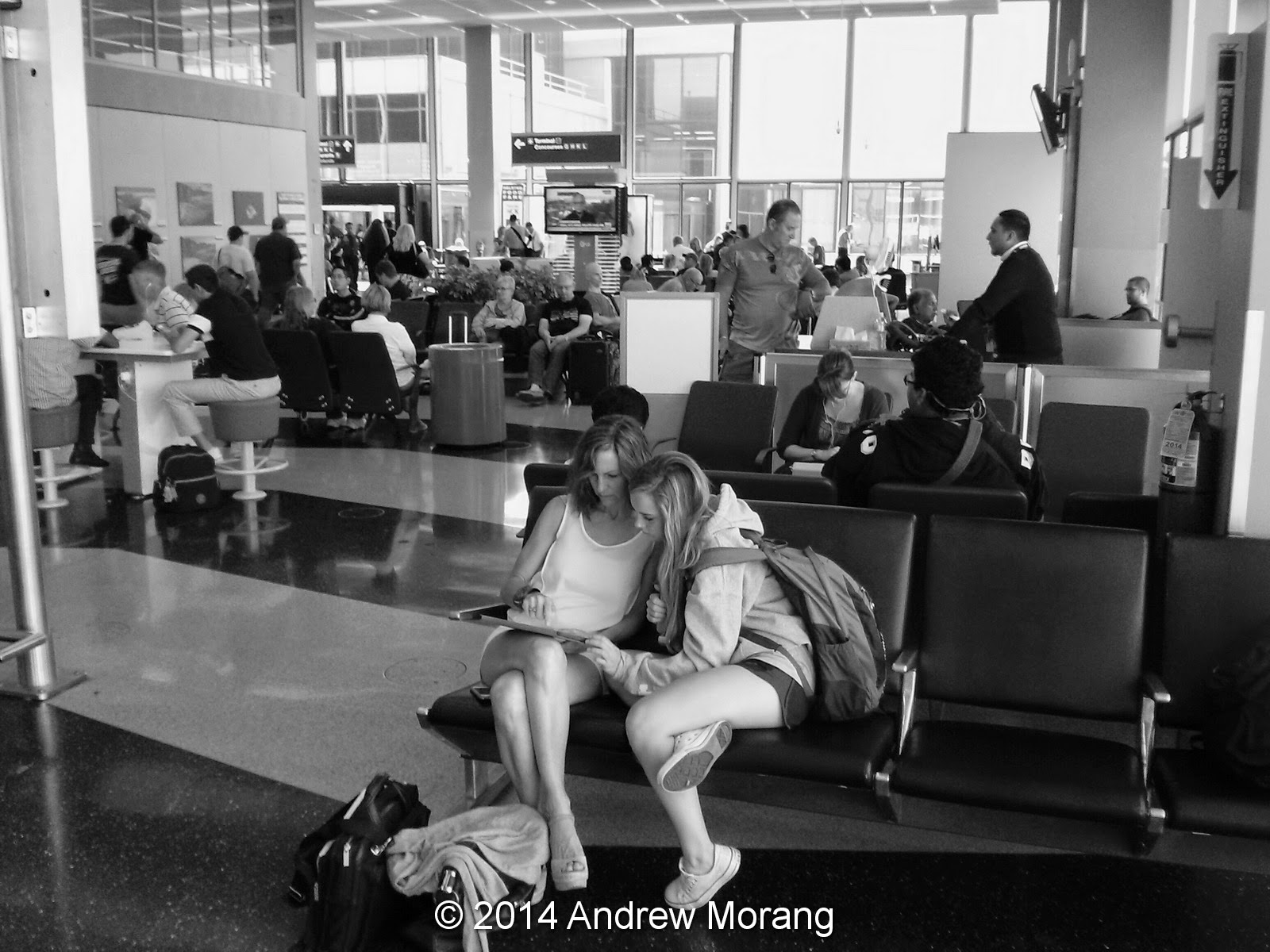 Finally we reach O'Hare Airport, one of the busiest in the world. It is much nicer than I remember from a couple of decades ago, but it is still a hassle to travel by air nowadays. Anything flies nowadays, and some of them behave like savages. At least you can catch a non-stop to Europe or Asia.

I took most of the photographs with a FujiFilm X-E1 digital camera with a Fuji 18-55mm zoom lens, opened the RAW files with Adobe Camera Raw, and processed the files with DxO Filmpack 3. For most, I used the Kodak Tri-X emulation, with slightly reduced grain and mild toning. Next time, I will use real Tri-X.
Posted by Kodachromeguy at 19:28