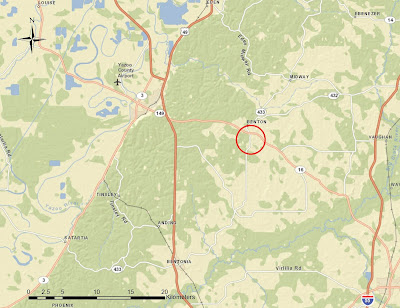 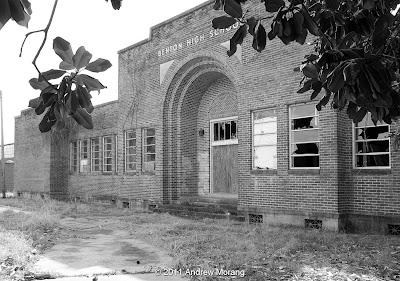 In August of 2009, Mississippi Preservation wrote about the abandoned Yazoo County Agricultural High School in Benton, MS. This inspired me to visit Benton with an out-of-town friend who shares my interest in exploring fading architecture and the remnants of our industrial society. We did not expect much but were disappointed to see that: 1. The 1930-vintage brick school building is deteriorating quickly; 2. The wood building housing treachers' apartments had just been demolished. 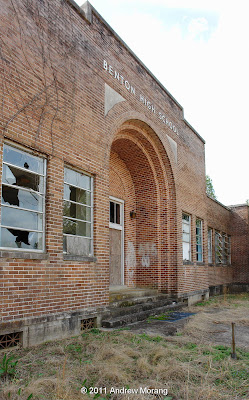 The brick building, built in 1930 by Lumbergh & Hayes (Canton architects/builders), had the classic school architecture with large windows to let in light and, in a pre-air conditioning era, fresh air. I like the arch over the main door. Students pass through with a sense that they are entering an important place. Also, windows allow the students to have a connection with nature, so much nicer than modern mega-schools that resemble prisons. 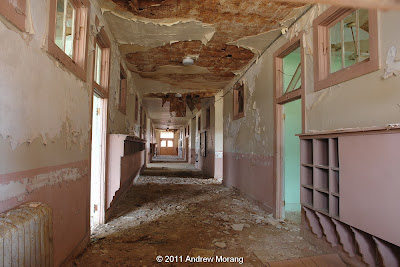 From the outside, the building appears sound, but look in through the windows and the deterioration is evident. The main hallway runs longitudinally through the building. Transoms would have allowed air flow on hot days. Notice the radiator, originally for a hot water or steam heat system. 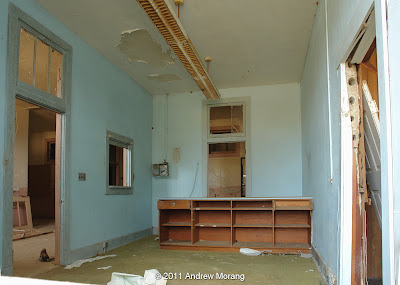 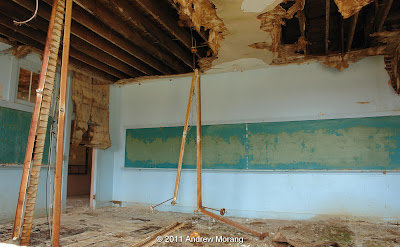 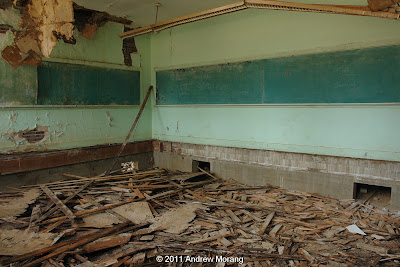 The rooms were high-ceilinged and had been painted with the ghastly industrial green pigment (the stuff that resists body fluids). Notice in last photograph, the floor has caved in and fallen down to the former crawl space. 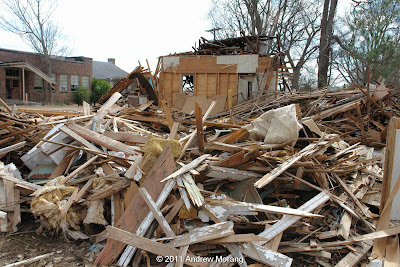 The wood teachers' apartment building had just been razed. I met the owner of the property, a builder (investor?) from Vicksburg. He recently bought the land from Yazoo County and had to knock down the wood building because it was imploding and dangerous. He was concerned that vagrants might get hurt in it. As you can see in the photograph above, all that is left is a pile of sticks and rubble. I'm surprised they could not recycle joists, but maybe the rot or termite damage was too extensive. The owner said someone had approached him to buy the bricks in the school building, but he was not interested in the offer. 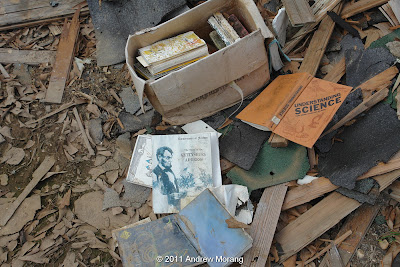 Some of the books were rather interesting, basic science texts without the fluff and political correctness idiocy found in contemporary textbooks. Who read these books, and did they continue on to college?

All photographs taken with a Sony DSC-R1 digital camera, tripod-mounted. Hint: always use a tripod for architecture and static subjects.

For more information: Mississippi Preservation
Posted by Kodachromeguy at 21:07

I taught at this school twenty years ago in one of those rooms pictured. It was crumbling even then. There was no air conditioning anywhere. The steam heat was not turned on on weekends, and it took a day for the thing to start working, so if it was a cold winter Monday, it stayed that way, same temperature as outside. The teaching materials were rudimentary. The staff was consistently white and exceedingly racist. The students were working class or marginal poverty line mixed races, predominantly black as the white county families endeavored to send their kids to the private white school down the road. I will never forget the many good kids I met while there who only needed a lift to surmount their circumstances. I wonder many times what became of them. They were worth saving. This school and the teaching staff were not. It's better off closed.

What did you teach?

If you were one of my students, I hope you suceeded, and got out to make something of your life. The world is a big place and there is a place in it for each and every one of us but we have to have a goal and ambition and hard work to make it happen. Some people are born with more luck than others unfortunately.

At this school the principal kept several paddles in his office. I was given one also and I was encouraged as a teacher to send down any students who gave me trouble if I didn't use the paddle, so he could beat them. This was in the early 1990s. The lady teacher across the hall kept a loaded pistol in her handbag and in her desk drawer. I was asked my first week by the students if I was a racist (person). Most of my students had a third grade reading level, some higher if they were juniors or seniors in the high school. I kept all the grading books of those days and have all the names of the students I taught. I would like to know what happened to them. I remember it well.