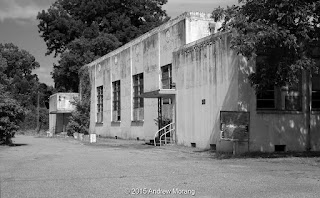 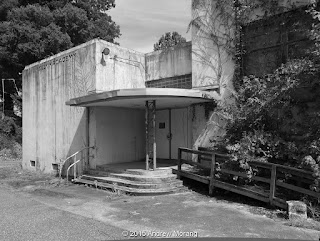 Generations of Warren County students who lived east of Vicksburg went to school at the Culkin Academy, later the Culkin Elementary School. When I first moved to the area in the mid-1980s, Culkin was still open, and I recall a PTA fund drive to buy air conditioners. The last year of operation was around 1999. A coworker's children attended elementary school there before the new Sherman Avenue Elementary School opened. 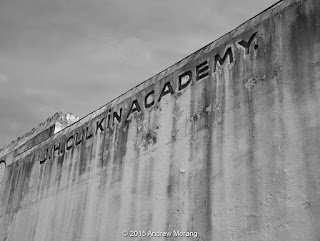 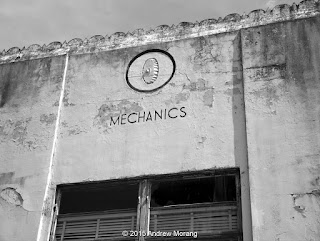 The old "Culkin Academy" sign is still engraved in the architectural concrete. On the front wall, each window was topped with the symbol of an academic discipline (in this case, mechanics). According to a friend at Mississippi Department of Archives and History, the building can be considered Art Moderne style, designed by a Modernist master, E.L. Malvaney of Jackson. It was completed in 1942. This was during World War II, but construction obviously started before the war began, likely funded by the Works Progress Administration. The county was lucky on the timing because most civilian construction was terminated or put on hold during the war years. 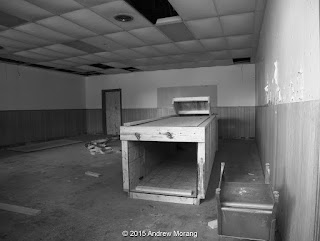 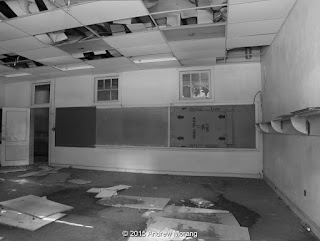 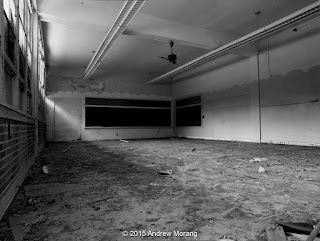 The classrooms are a mess. Many of the windows no longer have plywood covers, so I was able to place my camera on the window ledges and use time exposures. For a few years, a fellow rented the building and raised worms (yes, a worm farm). But I can't tell in what part of the building this animal husbandry occurred. 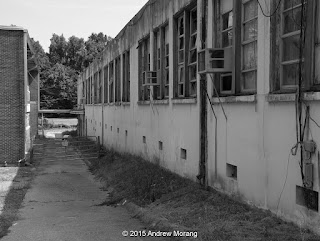 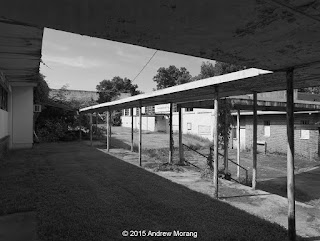 Not much is happening out back on a sultry summer day.

Suzassippi wrote about how the high school in Eupora, Mississippi (now the Webster County school district), may be an architectural match to the Culkin Academy

There may be a use for the Culkin school yet. On July 7, 2015, the Vicksburg Post reported:


The sheriff’s department uses a building on the school’s campus for self-contained breathing apparatus training and tactical training like searching through smoke filled rooms, Warren County Sheriff Martin Pace said. The department also practices intruder simulations besides using the site for other law enforcement training purposes. Pace said it gives the department’s employees real world experience so they can be prepared for any emergency that might arise in the schools, offices or other locations.

Photographs taken with a Panasonic G3 digital camera with the Panasonic Lumix 12-32mm lens. I processed the raw files and converted to black and white with PhotoNinja software.
Posted by Kodachromeguy at 21:23

Thanks for the trip down memory lane....

I attended Culkin for first grade. I remember it well. I think the 7th picture down may even have been my classroom. It was a unique layout from every other room on the campus. There was a TV mounted on the back wall, left of the chalkboard. It was on that TV that we watched the Challenger explode. My teacher’s name was Ms. Duncan. We also had a teacher’s aide named Ms. Sessions. Once a week, we had to get flouride treatments in the back of the classroom (guessing the municipal water supply didn’t contain fluoride?). I remember us having an early morning milk break, where we would walk to the cafteria just to drink milk. Then at lunch time, the cafeteria served catfish and pizza most every day. I remember there were lots of lizards in the playground area. I loved living in Vicksburg. My little brother was born there. The summer after first grade, my family moved to Fort Worth, Texas. I gave my pet fish to Ms. Duncan before we left.

Thanks for the info--from a tourist who just happened upon the unique structure.

My Dad graduated from here when it was a high school, maybe somewhere around 1954-55. It was a grand building at one time.

Thanks. I attended Culkin Academy 1st-8th grades. Sen. Culkin's potrait hung at rear of auditorium. I clearly remember school being dismissed the afternoon President Kennedy was assassinated. Found this post while looking for Art Deco buildings in Vicksburg. Now I know it is Art Moderne style. Such a well built building allowed to deteriorate. Thanks for posting.