Patan is one of the three independent kingdoms that once flourished in the Kathmandu valley of Nepal (the others being Kathmandu and Bhaktapur). Urban sprawl now encompasses much of the valley, but Patan still feels distinct and features unique architecture and cultural institutions. The historic name is "Lalitpur," or City of Beauty. According to The Rough Guide's Nepal, legend credits Patan's founding to King Arideva in 299 AD. By the seventh century, Patan had emerged as the artistic and cultural center of Nepal and a large expanse of the Himalaya. It remained a sovereign state until 1769, when Prithvi Narayan Shah conquered the valley and chose Kathmandu as his unified capital. In many ways, the historic core is frozen in time as it was in 1769. Therefore, Patan is an architectural gem well worth a visit. 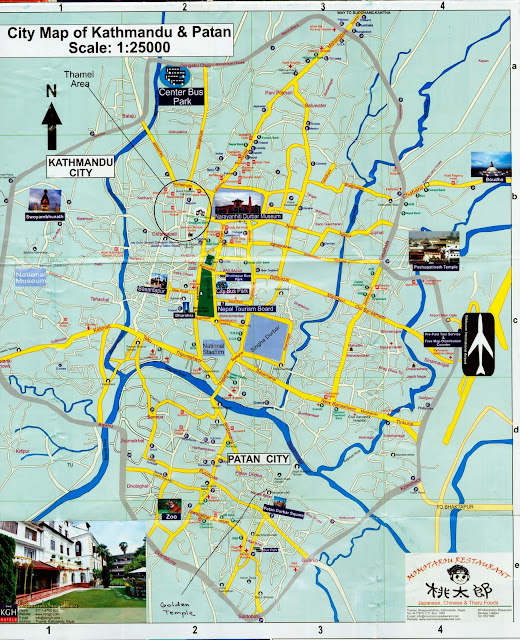 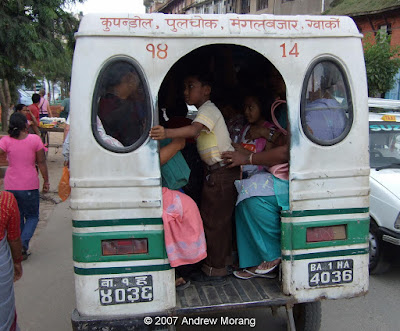 The tourist map shows Patan's location south of Kathmandu City. It is a short taxi ride there, but, depending on traffic, it may be rather time-consuming. Walking would be unpleasant with the constant cacophony of horns and stench of exhaust. Odd note: the tuk-tuks, that formerly belched terrible 2-stroke exhaust fumes, are now electric!! The electric motors and batteries were installed as a simple upgrade via a program funded by US Aid and the Asian Development Bank. The tuk-tuks retained their original transmissions, and the motors were connected to 2nd. gear. The photograph shows the normal status of a tuk-tuk: packed with customers. 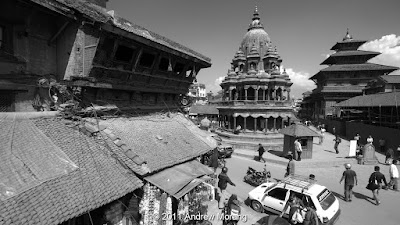 Most tour groups alight from their taxis or buses in front of the historic Durbar Square, where the palace and many of the temples are located. This is a UNESCO Heritage Site. We tourists have to pay an admission fee, and there is another admission into the Palace.

In this article, I want to concentrate on streets and alleys that tourists might overlook. 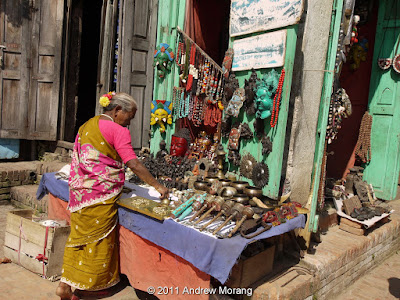 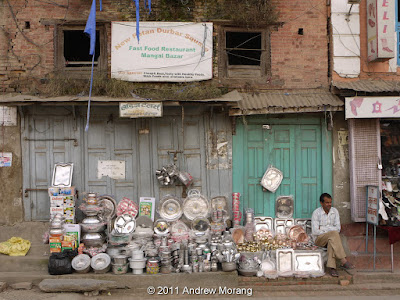 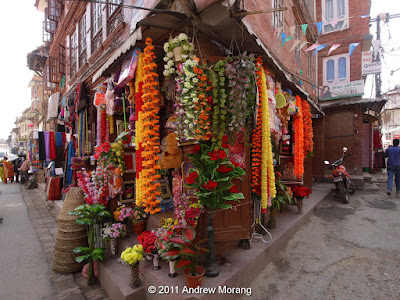 Patan, like the rest of Kathmandu, is a full of tiny shops selling all sorts of goods. You can buy fabrics, pots and pans, clothing, incense, magazines, food, singing bowls, religious goods, brassware, cosmetics, and more. 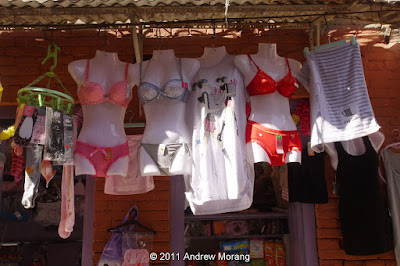 Remember the Ladies of Nepal? This must be where they buy their underwear. 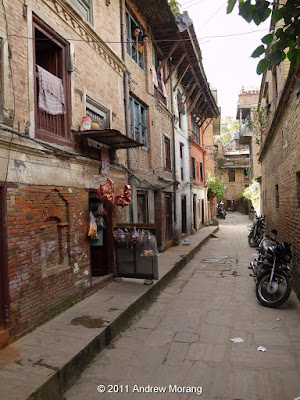 Once you get off the main thoroughfares, the narrow alleys are shaded and private, often only wide enough for motorbikes. 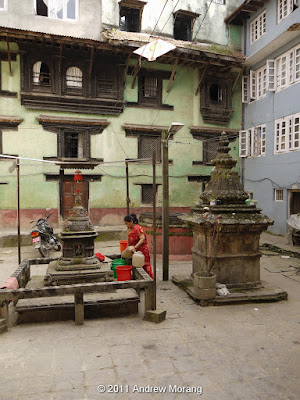 But wait, there is a hidden side to Patan: many of the houses and apartments were built around a courtyard that is accessible via narrow arched passageways. The courtyards feature a well that provided drinking water for hundreds of years, and many are still in use. I was amazed that the residents aren't using piped municipal water. 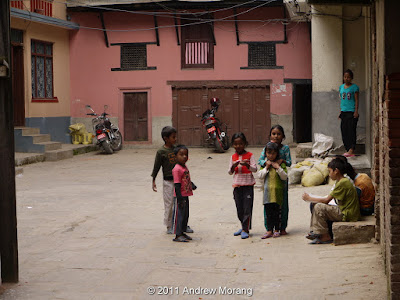 There is another world in these courtyards. Some are dingy, others joyful and full of life. 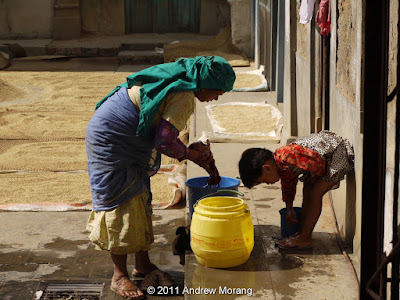 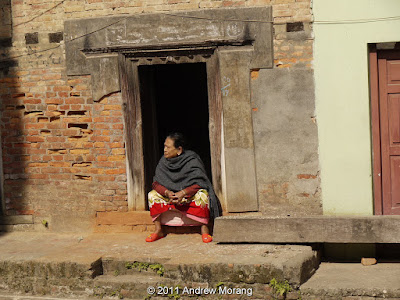 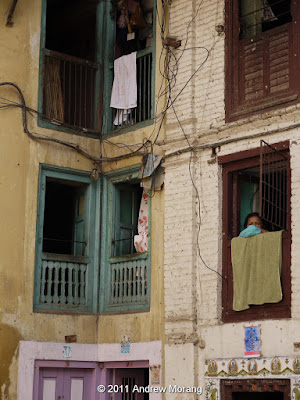 In some, individuals sit and watch the scene. In others, children play ball. The people I met were very friendly and probably wondered, "What is this odd tourist doing here? Did he lose his way to the palace or the toilet?" 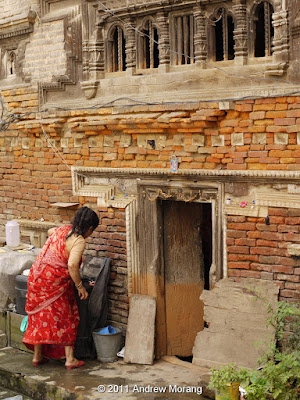 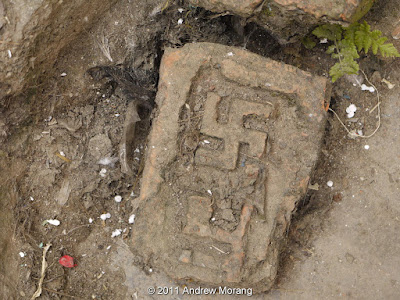 Some of the houses are really old, mid-1800s I guess. Often they are intermixed with 20th century flats. The next serious earthquake will be real trouble here. Some of the old bricks had the swastika symbol baked into the surface. According to Wikipedia, the symbol was widely used in Indian religions, specifically in Hinduism, Buddhism and Jainism, as a tantric symbol to evoke 'shakti' or the sacred symbol of good luck. 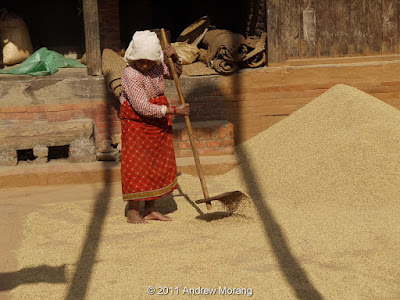 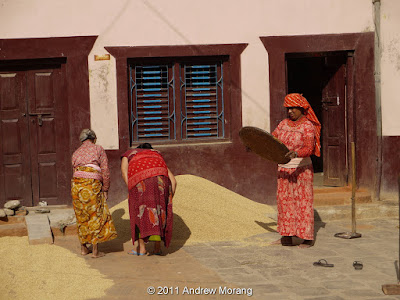 The sunnier courtyards often had piles of grain with ladies carefully tending it. No mice and rats? Maybe the cat or snake population takes care of the vermin. Regardless, it's a fascinating place to explore. Highly recommended.

I recognized the mannequins immediately!

Hi.
Thanks for your blog.
Interseting perspectives in your photographs.
I live in Kathmandu.

Do visit my blogo:
http://razeno.blogspot.com