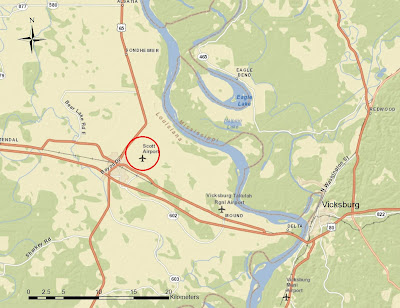 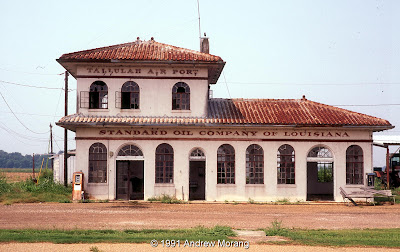 Rural USA is dotted with small airports. Many are only used for private aircraft, but some had significance in the early years of civil air transport. Scott Field in northern Louisiana is one of these. To get there, take the Interstate-20 exit to Tallulah, turn right on US80, drive a couple of miles east and turn left (north) on a dirt road. You will see a number of steel hangars containing crop-duster aircraft and this old-fashioned Spanish-style building with a "Standard Oil Company of Louisiana" sign on the side. 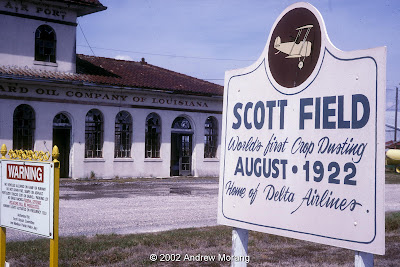 In 2002, a sign provided some historical context, but the sign is now gone. Several web pages describe this as the site of an agricultural experiment station and the origins of Delta Airlines, but possibly it is a bit of a stretch. Deltamuseum.org gives a more detailed review of how the Entomology Bureau of the U.S. Department of Agriculture set up a laboratory in Tallulah in the early 1920s to conduct large-scale cotton insect research. The laboratory, which was at another site in town, conducted experiments in boll weevil eradication and dispensing calcium arsenate from the air. In 1922, the Army Air Service sent three aircraft and pilots to an airstrip near Tallulah. Later named Scott Field, this was to become the first municipal airport in Louisiana. Based on the success of these tests, C.E. Woolman operated dusting operations in Louisiana, Mexico, and Peru in the mid-1920s. He returned to Monroe, Louisiana, to set up a new new company named Delta Air Service with the support of Monroe businessmen. On June 17, 1929, Delta Air Service operated its first passenger flight over a route that stretched from Dallas, Texas, to Jackson, Mississippi. For more background, see Delta Air Lines: 75 Years of Airline Excellence by Geoff Jones. 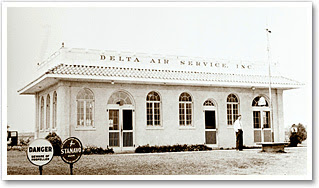 This is Delta's terminal in Monroe, very similar in style to the Tallulah building.
The terminal building, dating from 1930, according to one source, is a simple but elegant structure with cheerful windows all around. Sadly, most of the window panes have been broken out, but the roof seems largely intact. I have no information about the architect. The US Marine Corps used Scott Field for training during World War II. I also have no information on what years the field provided commercial air transportation. 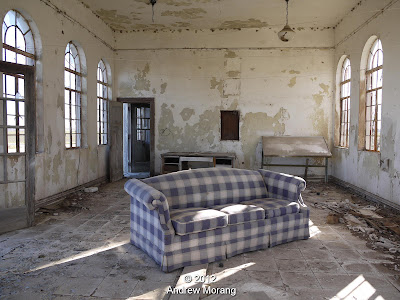 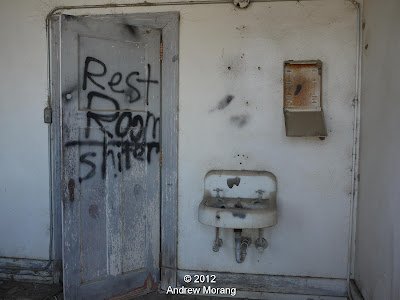 The interior is a mess and little or nothing is left of original fittings. 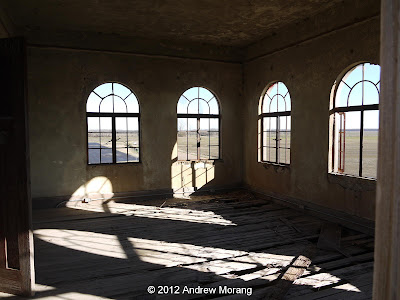 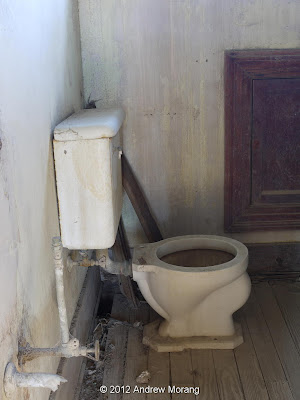 The second floor is accessed via exterior stairs, suggesting an add-on construction. 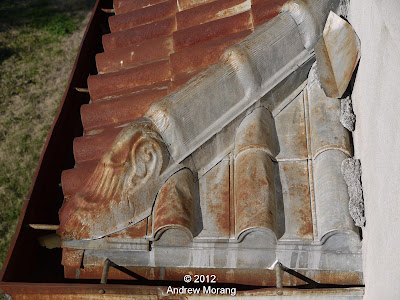 The roof is especially interesting. It looks like clay tile but is really made of zinc-coated steel units. Various companies made these metal tiles in the early 20th century. The very interesting Preservation in Mississippi web page has a 2011 article discussing use of of metal shingles.

The Montross Metal Shingle company did produce a metal barrel tile style shingle. Looking at the stylized ridge cap I would wager to say that Montross produced these shingles.

The Standard Oil Building at Scott Field has be reclaimed/renovated. It really is a sight to see now.