Hurricane (super storm) Sandy caused immense damage to New York, New Jersey, and surrounding areas on October 29, 2012. The storm, which killed 230 people, cause up to $75 billion in losses, according to the National Hurricane Center (2012 estimate). This was not the first major storm to destroy property and beaches along the Jersey shore.

New Jersey has been struck with damaging hurricanes and northeasters many times. These black and white aerial photographs of Ventnor-Atlantic City, Brigantine, and Barnegat Lighthouse areas were taken on 15 September 1944, and 24 October 1944. They show damage to the boardwalk and to structures caused by the "Great Atlantic Hurricane" of 13-14 September, 1944. The storm first made landfall as a Category 3 near Cape Hatteras. It moved out to sea again and made a second landfall on eastern Long Island on September 14, after causing significant damage along the New Jersey shore. Of the 390 people who perished, 340 were lost on ships at sea (some of them servicemen on convoys). The storm was so powerful, it sank the US Navy destroyer USS Warrington (DD-383) about 700 km east of Vero Beach, FL, with a loss of 248 sailors (see The Dragon's Breath: Hurricane at Sea by Robert A. Dawes (Jr.), Naval Institute Press, Mar 1, 1996 - 222 pages).

The low death toll on land was due to well-executed warnings and evacuations, a result of the bitter lessons of the great New England Hurricane of 1938. However, thousands of houses and businesses were destroyed and damaged along the Jersey shore. Pielke and Landsea (1998) calculated the total damage in 1995 Dollars to be $6.5 billion. (See: Pielke, R.A., Jr., and Landsea, C.W. 1998. Normalized hurricane damages in the United States:  1925-95. Weather and Forecasting, 13(3), 621–631). 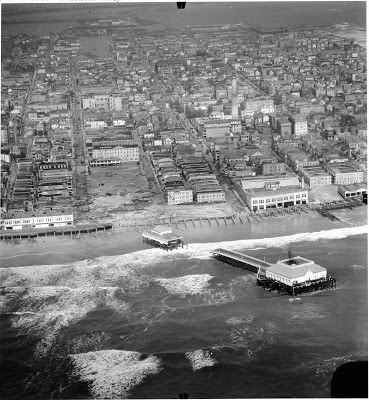 This is the Heinz Pier at Atlantic City. Part of it was washed out, and the boardwalk behind was torn off. The Pier, formerly known as the Iron Pier, was so badly damaged that it was later demolished. 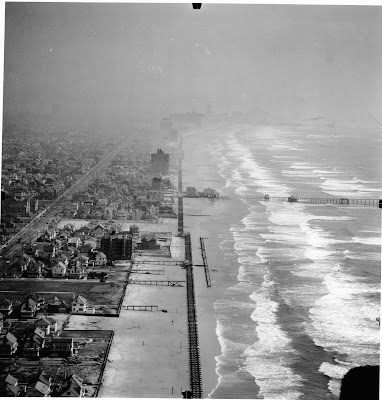 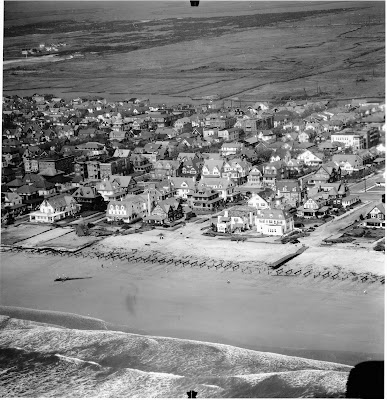 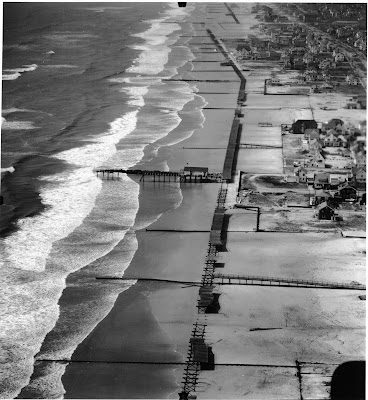 Here are three views of Ventnor, already a major urban area in 1944. Here too, the boardwalk has been damaged, and considerable sand overwashed onto the streets. But the houses look intact. 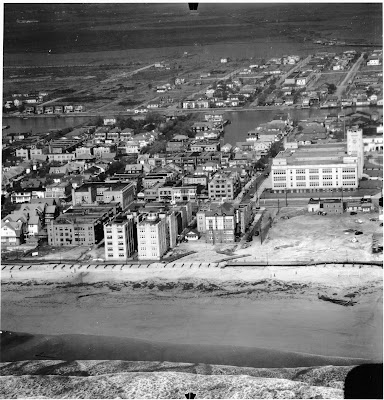 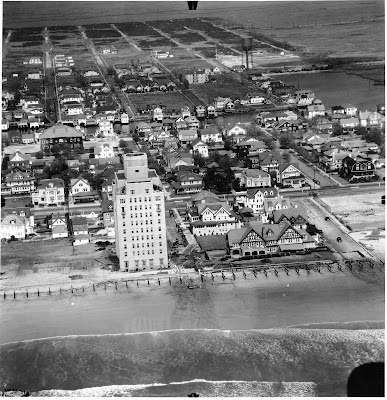 Here is an art deco apartment building with a handsome Tudor-style hotel facing the ocean. The art deco building is still standing, but the hotel is gone. 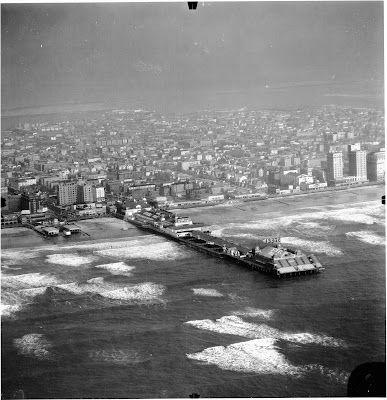 This is the famous Steel Pier with amusements and shows. Notice the bleachers facing the sea at the end of the pier. These were for air shows the water circus. 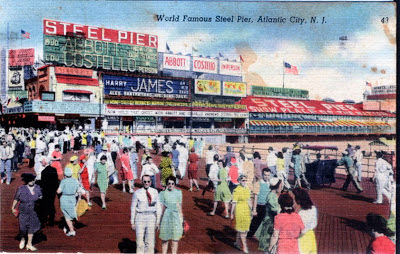 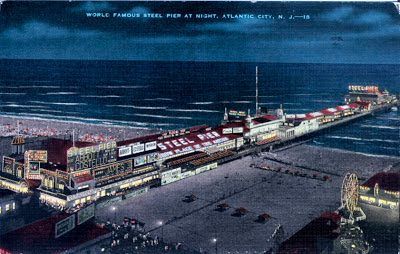 Two historical post cards of the Steel Pier. During the War, this was a popular destination for servicemen on leave. The Steel Pier still exists, but I am not sure if it occupies exactly the same footprint. 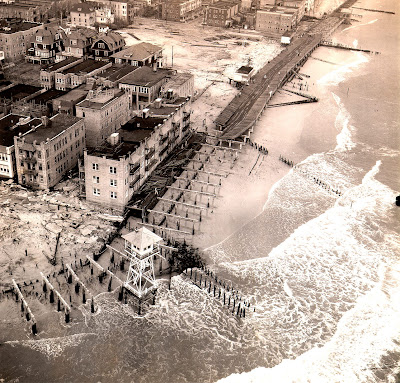 Here is a lower-elevation photograph of the north end of Atlantic City at Absecon Inlet. 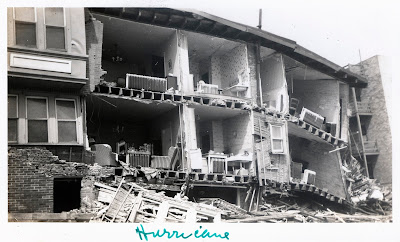 An apartment building in Atlantic City lost one wall. Note how the hot water radiators remained upright despite the wall falling away. Also note how the interior walls were plaster lath - high-quality construction. 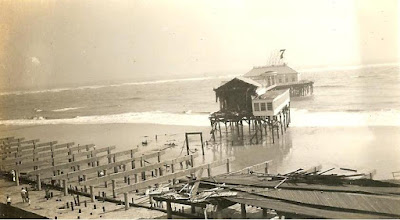 A damaged pier separated from the land. The surf lifted the boardwalk boards from their supports. 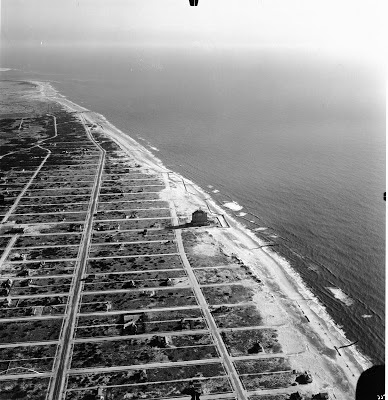 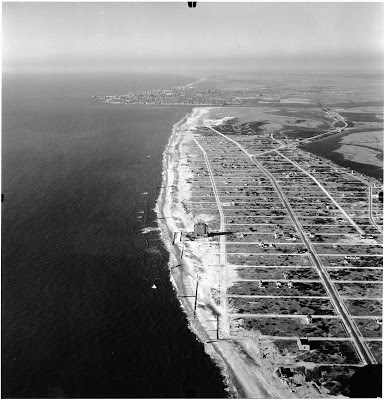 These two frames show Brigantine, New Jersey, with the last shot looking south towards Atlantic City. In 1944, Brigantine was still a new development, and many of the lots were empty. Look at Google Maps to compare with the urban sprawl today. 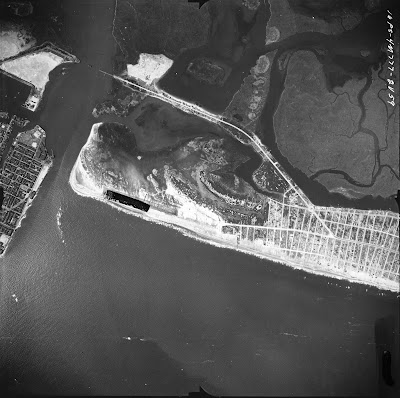 Just look at the flat and low terrain. Do you think it is vulnerable to storms? Should we as a society collectively be responsible for their rebuilding costs? Do tax receipts and tourist revenues repay the cost of rebuilding after storms? Should we socialize the risk (which we have, of course) while developers and speculators reap the initial benefits? These are serious questions to ponder, and we failed miserably and cowardly to address these issues after the disaster of Hurricane Katrina in 2005 on the Gulf Coast.

The source of original paper prints is the archive of the Beach Erosion Board (predecessor of the former Coastal Engineering Research Center), presently stored at the Coastal and Hydraulics Laboratory, Engineer Research and Development Center, Vicksburg, Mississippi, USA. Original image condition: excellent, with full tonal range, printed on single-weight glossy paper. The printing date is unknown but believed to be 1944. The prints are in a BEB folder labeled 11-12, 11-13, 11-14, and 11-15. The photographic platform is unknown, but possibly a blimp. The BEB index book cites the U.S. Navy as source. Camera, focal length, film: unknown. The frames were not taken on a 9x9-inch aerial camera but on some other camera with a frame size approx. 6x7 inch. Total number of frames is 11. The filename includes a 4-digit number, which was written in pencil on the back of each frame.

For more information on historical hurricanes and construction of storm surge barriers in New England and New Jersey, see:

For more information on the Beach Erosion Board archives, see:

Update 2017: An article in Politico describes how the National Flood Insurance Program encourages people to build in flood-prone areas and rewards them to file claims after storm events. In effect, it is a giant subsidy to the building and development industry.
Posted by Kodachromeguy at 16:30

The photo of the Steel Pier identicing the bleachers purpose was to watch air shows is incorect.The seats that were erected behind the Pier's Marine Ballroom were so patrons could view the water circus.High diving horses were among many acts.The performance stage was destroyed by the 1944 hurricane. It was rebult.Interesting note: The pier's length was approximately one-half mile.

Thank you for the interesting update about the water circus. Diving horses - amazing.

Yes thank you, I remember watching the diving horse there many times. In fact my mom was asked to ride that horse when she was demonstrating turbans at Hess Brothers Store in Allentown, Pa

I Don't Recall Seeing The Margate Boardwalk That Was Destroyed In The 1944 Storm And Was Never Rebuilt.Are There Any Photographs Of That?

Hi Anonymous, I do not know if thee are any photographs of the Margate boardwalk. It would be quite a search through the drawer containing mid-1940s New Jersey prints.