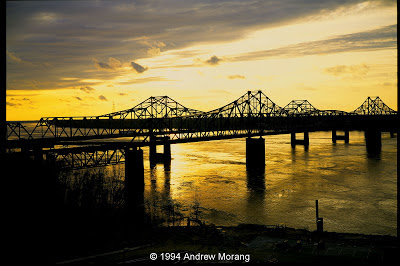 This is the old Mississippi River bridge, photographed in 1994 before the multi-floor parking garage was built, which partly blocks this view. The bridge has been closed to car traffic since the early-1990s, but Kansas City Southern railroad runs trains across the river many times a day. Numerous people have proposed opening a biking and walking trail on the old roadway, but petty squabbles and lack of imagination have squashed these plans to date. Can you imagine what a fantastic tourist attraction this would be, a chance to walk or jog high above one of the world's great waterways?  This is a photograph taken with a Fuji GW690II 6×9 camera on Fuji Velvia film. 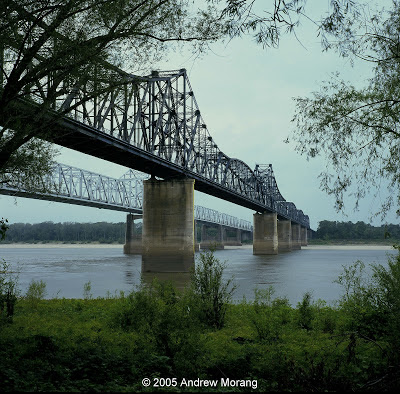 This is a view looking west of the old bridge from the banks of the river. You can reach this site easily by parking in the Ameristar Casino parking lot and walking south through the woods. Just look out for snakes. 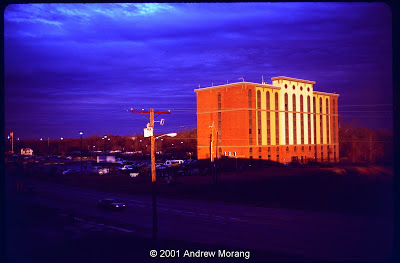 This is the Ameristar Casino Hotel. It sticks up from the flat bluff like some Neolithic monolith. The Magnolia Inn occupied this site before the new hotel was built. A coworker's wife worked at reception at the older motel in the late-1980s, and was fired when she let a black couple check in.  Before the Magnolia was built, it was an empty field where the carnival set up temporary quarters.  (Photograph:  Kodachrome 25 film taken with a Leica M3 and 90mm Tele-Elmarit lens.) 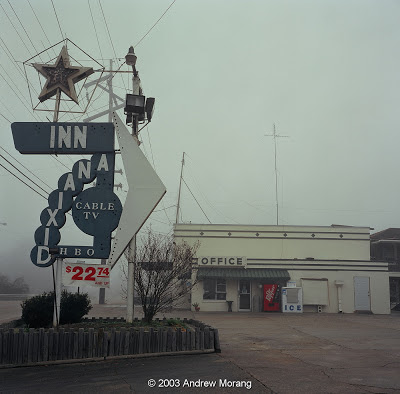 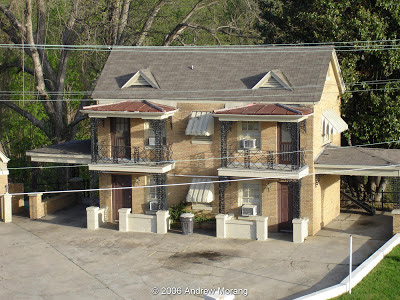 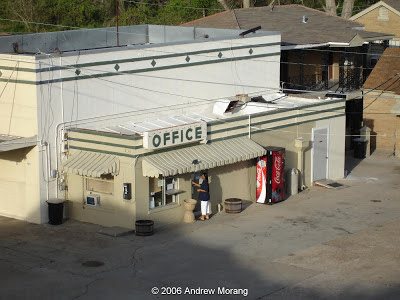 Heading North we reach the Dixiana Inn, still in business. It is a venerable establishment and has been here for decades. There is a view from the bluff at Louisiana Circle. 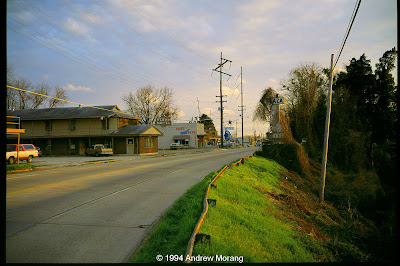 Next, to the north, is the former Plaza Motel at 4033 Washington Street. I think these units are now apartments, but am not sure. The main building resembles a World War II barracks, similar to two units in an apartment complex next to the Waterways Experiment Station. 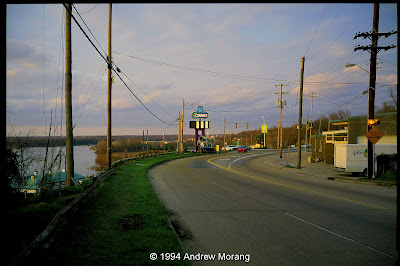 This is the view north on Washington Street near the ramp that drops steeply to Diamond Jacks Casino. 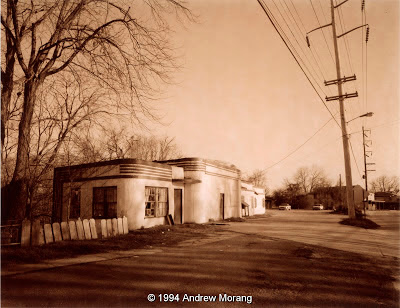 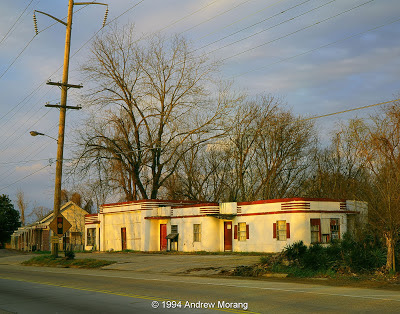 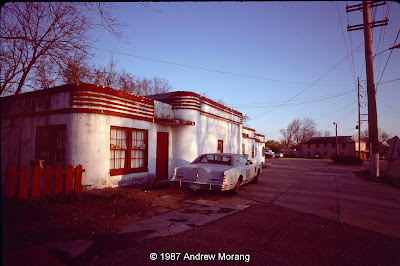 This was very unusual: an art-deco filling station that had been converted into apartments.  The service bay had been enclosed with a plywood wall.  Did people sleep in there?  I wonder if there were fumes from old spilled oil and solvent? The filling station was periodically repainted with the characteristic red stripes to accentuate the horizontal lines. The sepia-color print was made on Polaroid 4×5" instant sepia film with a 75mm Super-Angulon lens.  It was a wonderful emulsion. 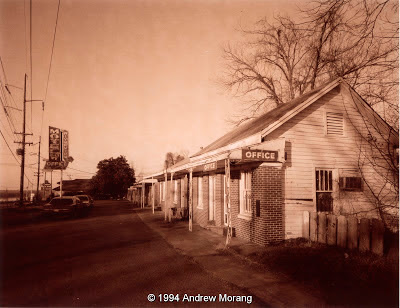 Just to the north was the Riverview Motel, an old-fashioned motor court. It was located at about 4009 Washington Street, near the bend in the road, and it did have a great view. 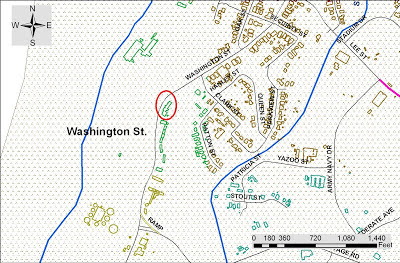 This map, with 1995 building footprints, shows the former Riverview Motel. 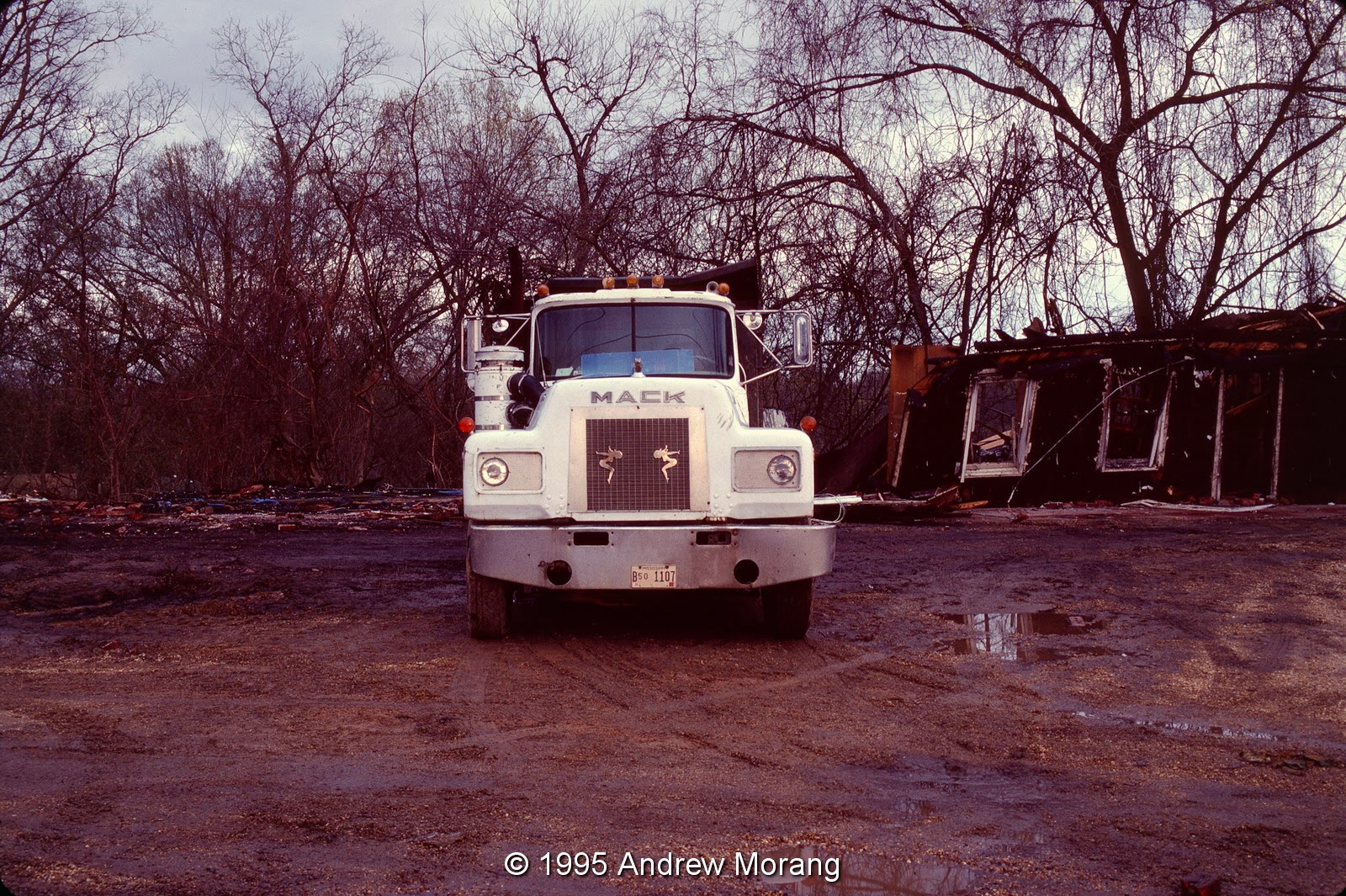 The Riverview and the filling station/apartment were demolished in 1995. 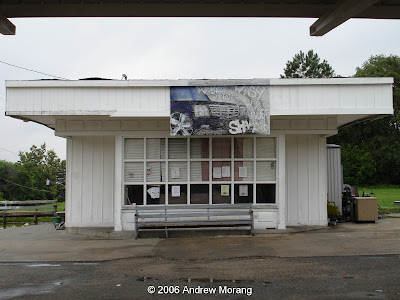 Proceed further north, and as far as I know, there were no more motels. But there was another filling station, now a car detail shop. There is not much commercial activity on Washington Street now. I assume the I-20 corridor siphoned it away, along with general decline in industrial activity.
Finally, some of the local children were interested in my Leica camera and agreed to pose for an informal portrait.
Posted by Kodachromeguy at 20:51

Wow! you actually reminded my vacation in Washington. It was really a wonderful one.