The Jackson Street Missionary Baptist Church is a handsome, imposing brick church at the corner of Jackson and 2nd North Streets. It is one of many churches in Vicksburg, which I hope to feature in upcoming articles. 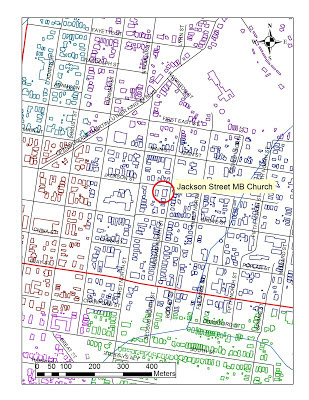 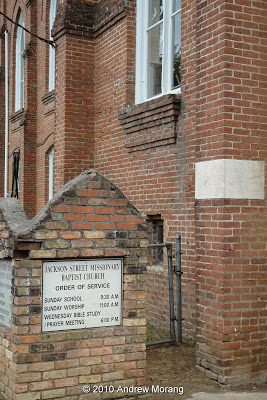 I do not know too much about the history of the Jackson Street MB Church, but the cornerstone shows construction in 1901. This was an active and devoted African American community to support construction of such a handsome building. The 1994 photograph was taken on Fuji Velvia film with a Fuji GW690II rangefinder camera. 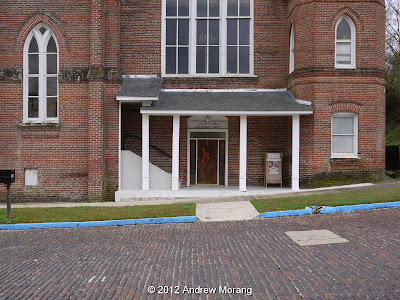 Once when I was photographing here, an elderly lady told me with pride that the bricks had been made by slaves. She had the chronology off by a few decades, but the pride in the church was clearly there. The church never had stained glass, but many of the window panes are original and display the rippled pattern you see in old glass.  Jackson Street here is still brick-paved, as were most Vicksburg Streets around 1900. Notice the rough pattern, which I was told was designed to let horses get traction. Most of the glazed bricks are amazingly intact. 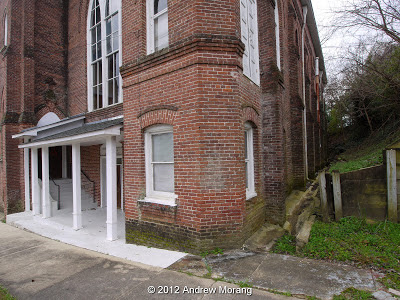 At one time, the second-floor door led to a fire escape. The church was not originally designed with handicapped access. The congregation hopes to purchase the high-elevation lot next door and pave it for parking. Then elderly members of the congregation will be able to enter the church via a bridge through this door directly into the 2nd floor. 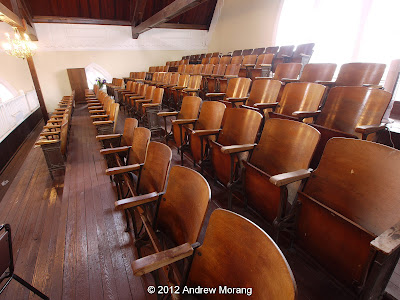 One of the deacons (is this the right term?) showed me around one Saturday. The balcony was originally equipped with theater seats. He told me the church was originally built with plaster walls directly on the brick bearing walls. It was hard to heat in winter and was drafty, so the congregation installed sheetrock on top of furring strips, which provided a degree of insulation. The church is now centrally heated. 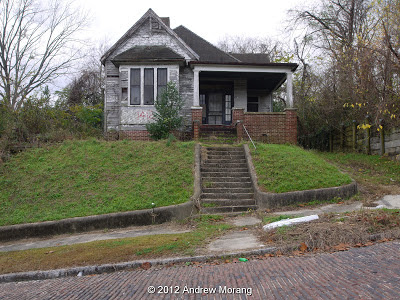 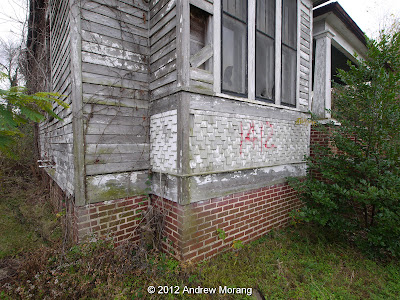 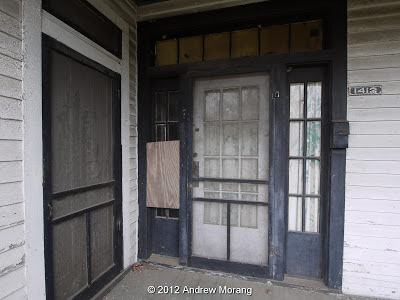 This is the late-1800s cottage at 1412 Jackson Street, right next to the church. It is a handsome, traditional wood cottage but now in poor condition. The City inspector marked it for demolition with the spray-painted number on the front. It may have once been multi-family with the three entry doors. This is the lot that the church hopes to buy and use for parking. 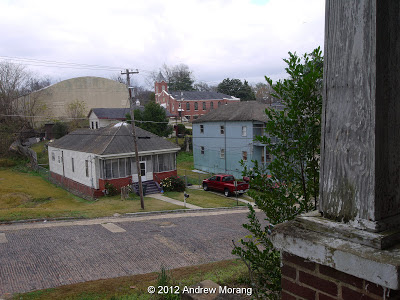 This is the view north across Jackson Street from the porch of the condemned cottage. The house below is no. 1413. St. Mary's Catholic Church is on the hill to the north, at the corner of Main and 2nd North Streets. 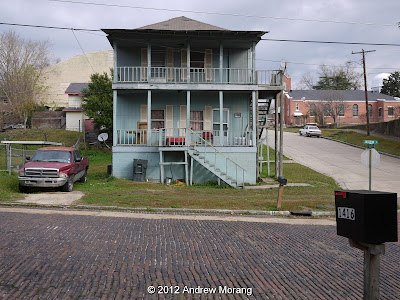 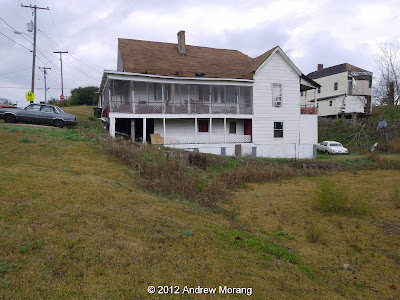 At the top of the hill is 1907. A lady told me that it was over 100 years old. Two houses were located in the empty lot in the foreground, but they were torn down. She said the land is sinking because of a large drain below. 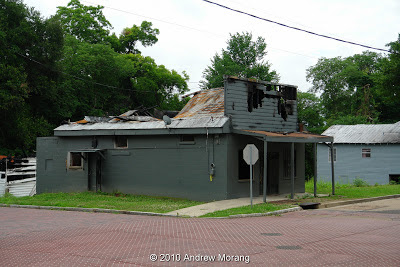 This little store is at 1001 2nd East Street. It once served the local community. Note: this building is cinder block, so probably post-World War II. I wonder if it replaced an older wood store? 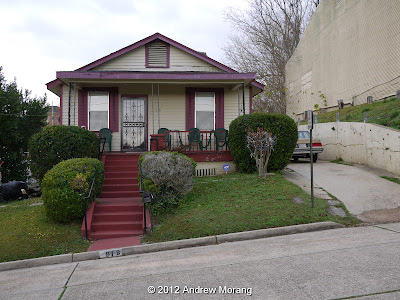 Most photographs taken with a Panasonic G1 digital camera, all tripod-mounted.  (As I have written before, use a tripod for architecture, set your camera at its lowest ISO setting, and use the optimum aperture for your lens.  Optimum is usually 1 or 2 f-stops closed from maximum aperture.)  For some of these frames, I was testing a new Panasonic 20mm f/1.7 lens.. Map made with ESRI ArcMap GIS software.
Posted by Kodachromeguy at 16:21

And check out that Y tracery on the windows of the church!

If this is down the hill from St. Mary Catholic Church, this was Gilmore's Grocery.

The house next to Jackson St MBC I believe, was where the piano teacher lived. She was from an old and distinguished family. Her last name began with a P.


I do agree with all the ideas you’ve offered to your post. They are very convincing and will definitely work. Still, the posts are very short for starters. May you please prolong them a little from subsequent time? Thanks for the post.
slots