No, not the 1890s, the 1990s. I recently rummaged through some of my negatives and was horrified that they were already 20 years old. I suppose you are officially an old geezer when you think something is not particularly old but your co-workers would consider them so 20th century or so non-digital (you mean, like chemical-based?). This "old days" post will consist of a semi-random walk around Vicksburg with film. 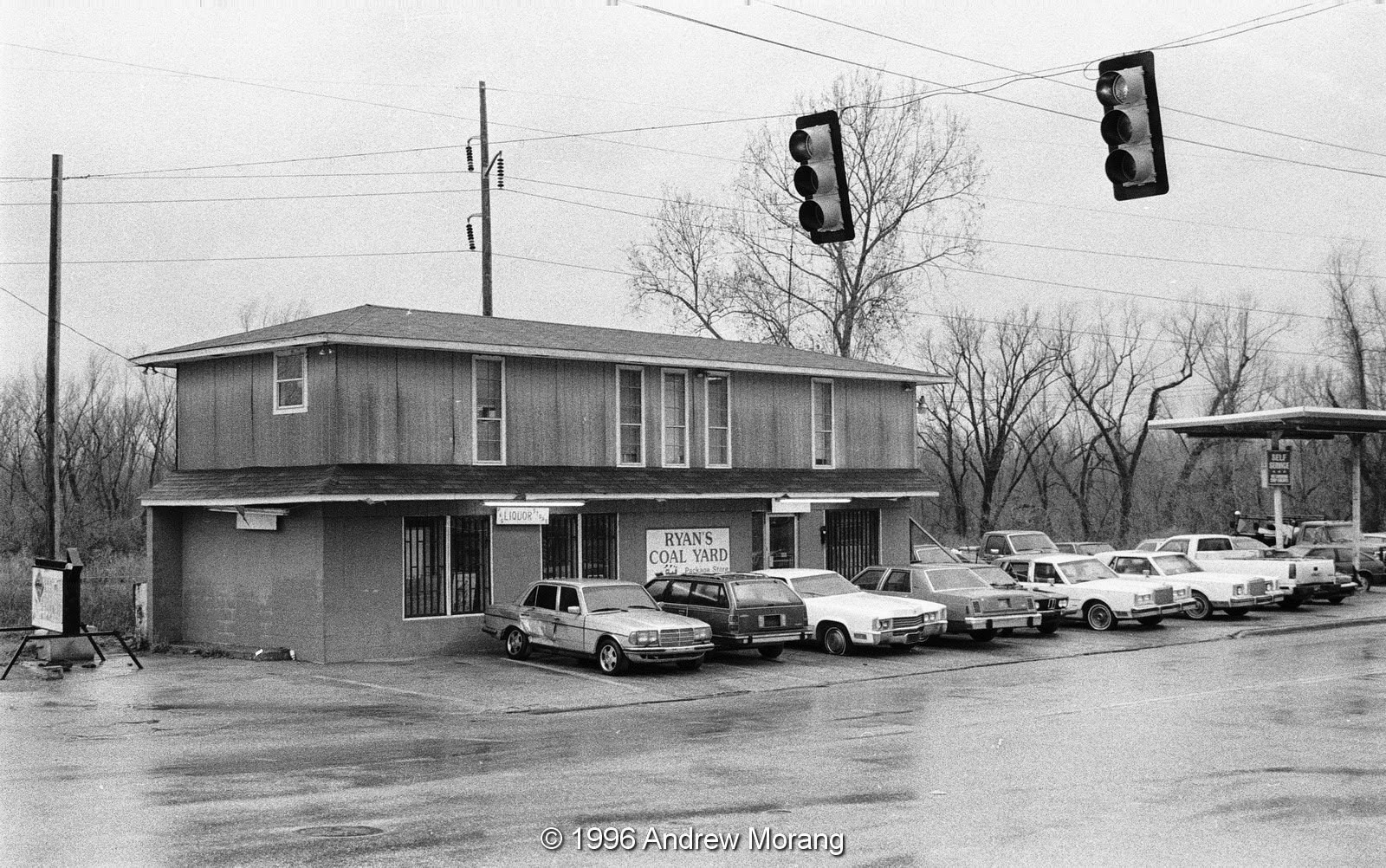 This is Ryan's Coal Yard Package Store, at the corner of North Washington Street and First East. The building was torn down sometime in the early 2000s. At one time, this (or a predecessor building) was a coal yard. It was right next to the railroad tracks, and most homes heated with coal before the 1930s. (Trivia fact: Coal fires caused cinders that occasionally escaped from chimneys. Therefore, most older homes were re-roofed with asbestos shingles in the 1920s and '30s because the asbestos was fire-proof.) This is a Tri-X frame taken with a Nikon F3 camera. 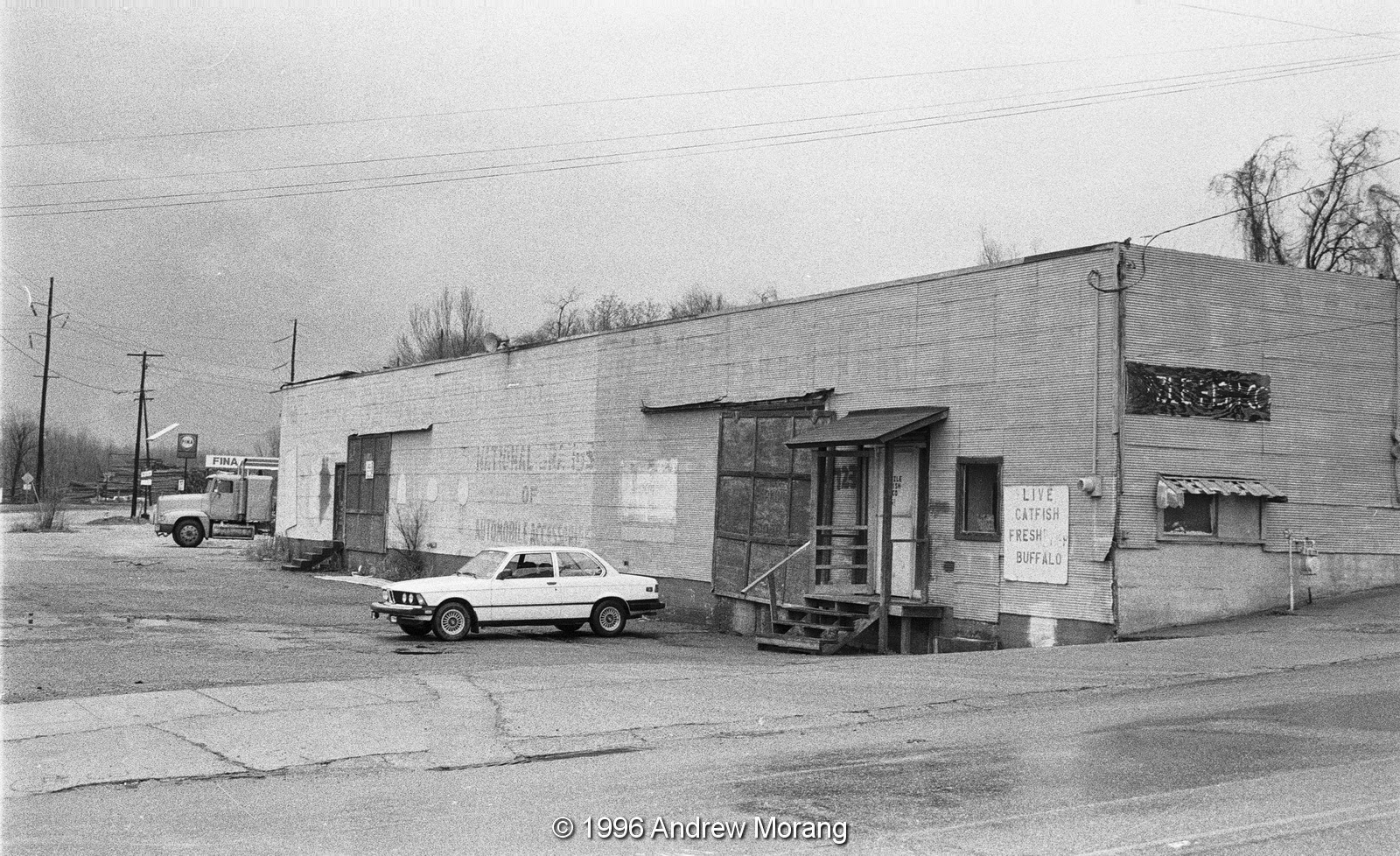 This is the warehouse right across the street from the Ryan Coal Yard. The place is empty and for sale now. The Fina gasoline station in the distance is where Klondike restaurant is now located. 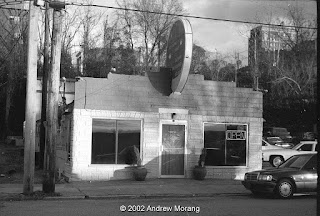 This is L D's Kitchen at 1111 Mulberry Street, just a short distance south of the Ryan Coal Yard. The building is still in use as a restaurant. At one time, it was a package store. This is a photograph taken with a 35mm Summicron-RF lens on a Leica. 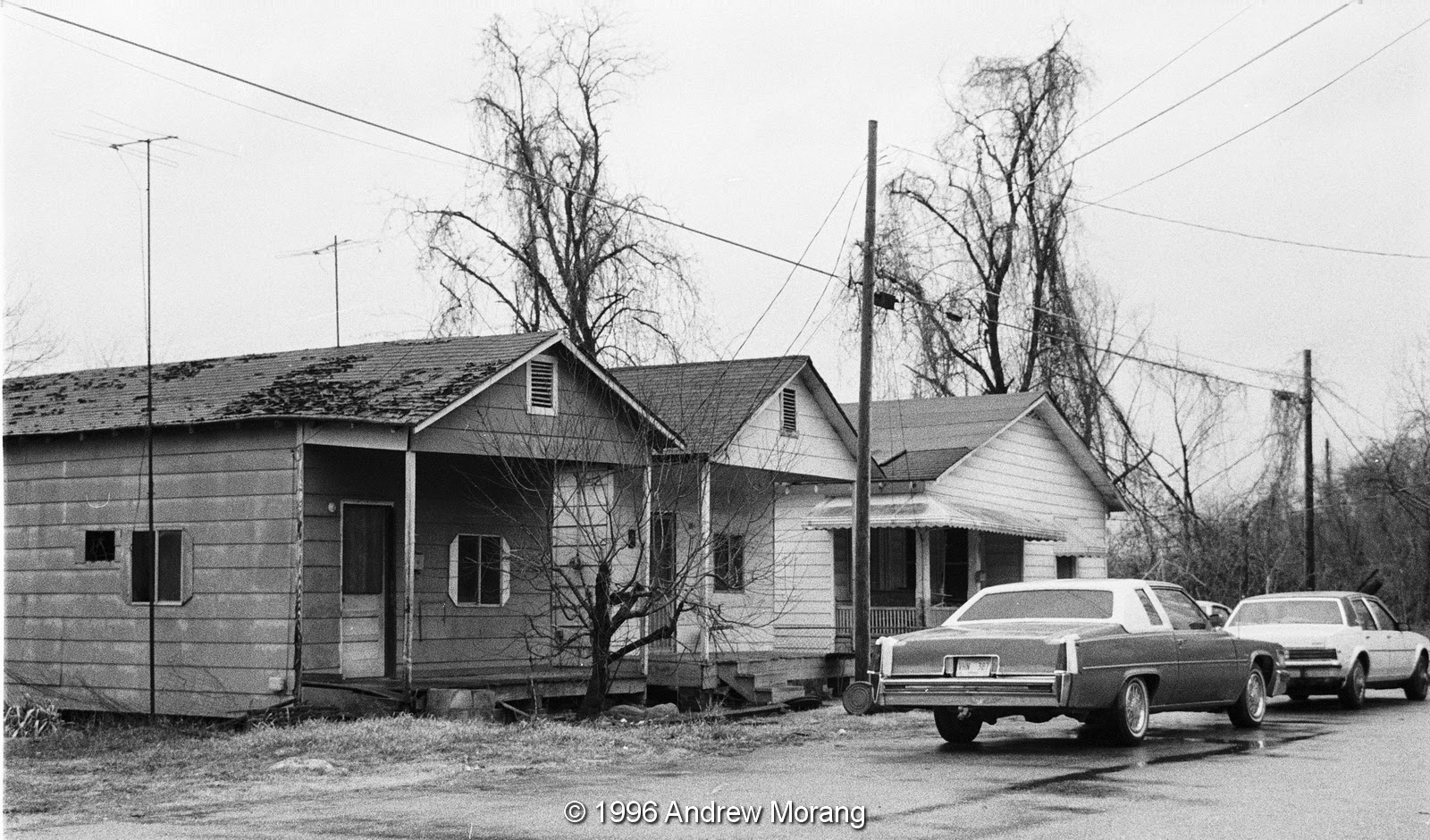 Here are three shotgun shacks, possibly off Clay Street. Many of these have been torn down in the last two decades. 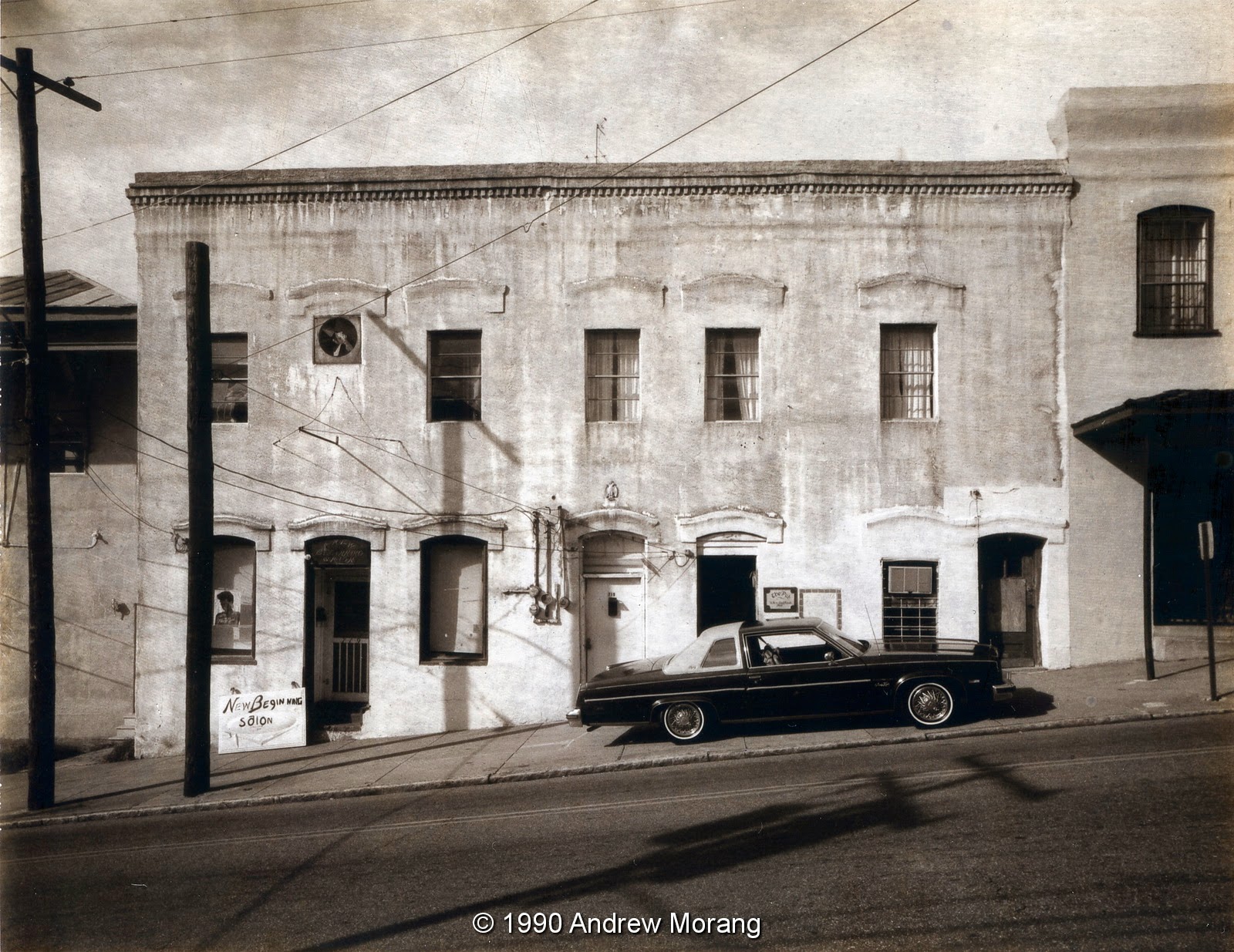 This is the old commercial building at 719 Grove Street. It was condemned for over a year but is now being restored. This is a Polaroid Type 54 instant print taken with a 90mm ƒ/6.8 Raptar lens on a 4×5" Tachihara camera. 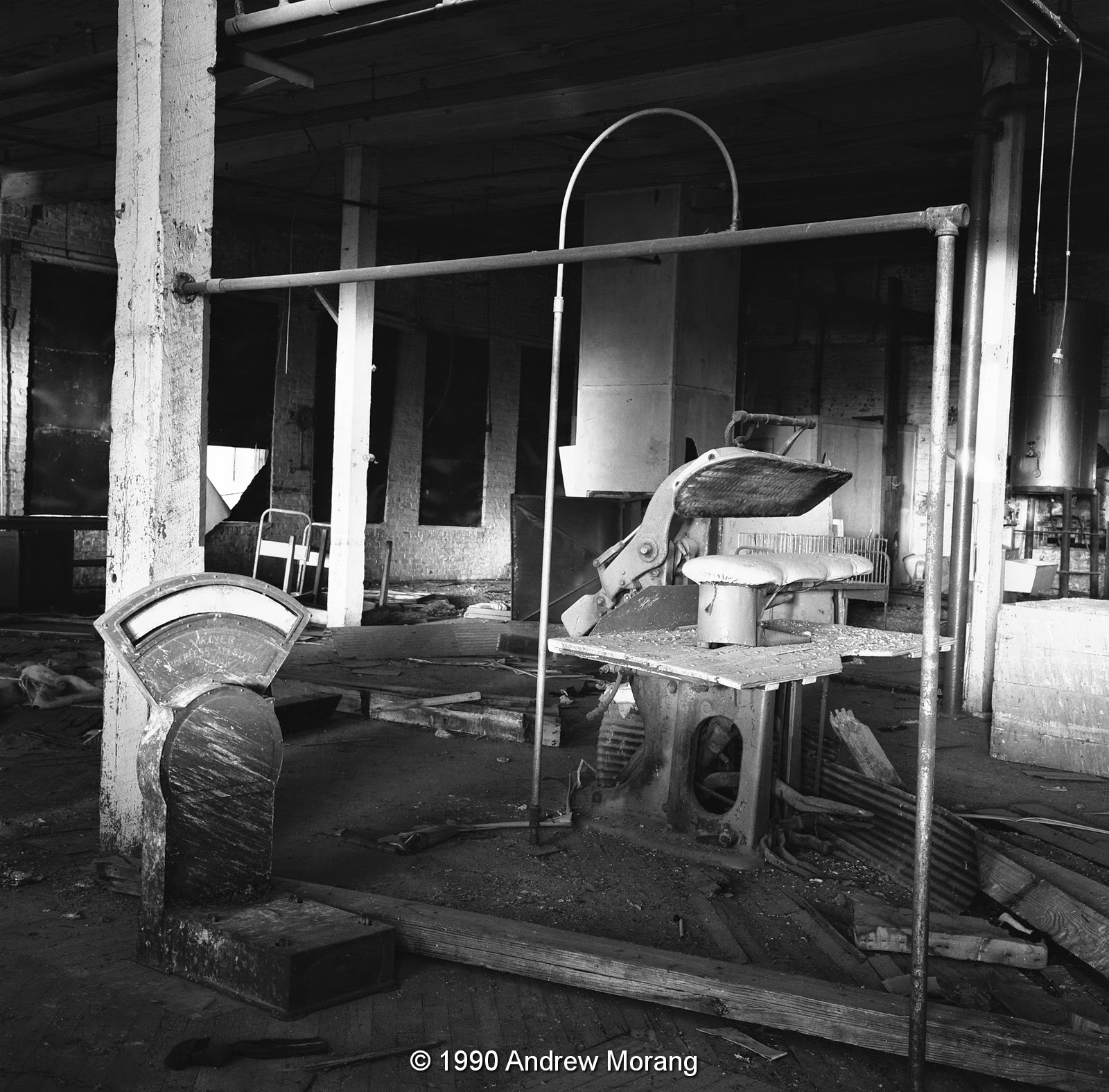 Right across Grove Street from the commercial block was the Vicksburg Steam Laundry. It was formed in 1910 and closed some time before 1985. The laundry was in the building that previously housed the first commercial Coca-Cola bottling plant in the country. The building burned in the early 1990s. The rumor is that someone started to redevelop it but found asbestos, so instead torched it. That way, the fire department took care of the problem by washing the asbestos down the storm drains. 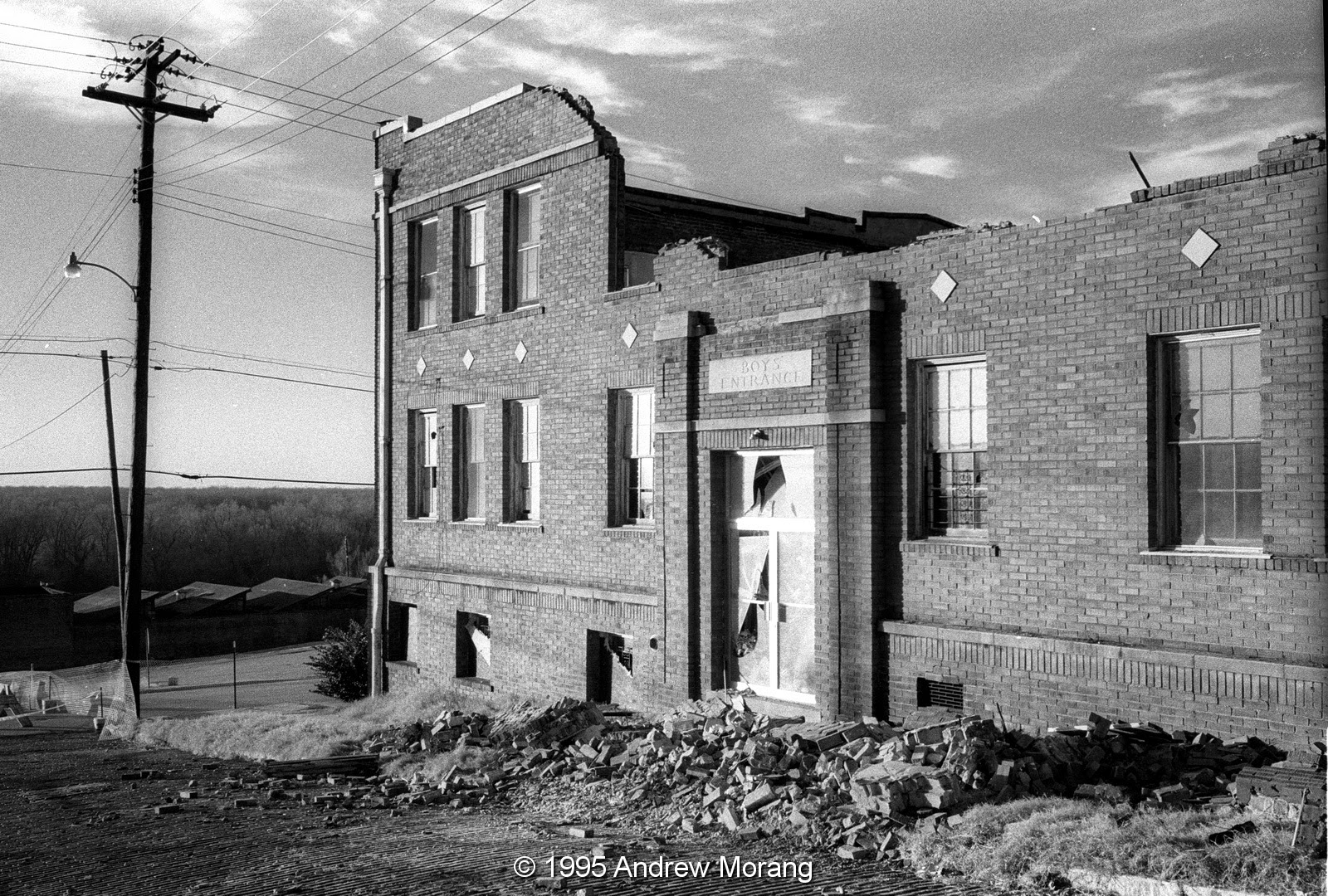 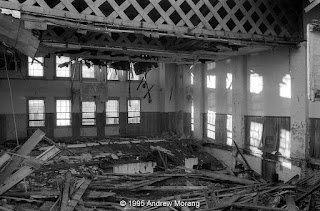 The Jackson Street YMCA was demolished in 1995. It was built in 1924 and served the African American community. When it was built, YMCAs were segregated. Notice "Boys' Entrance" above the door. The Jackson Street Community Center, address 923 Walnut Street, now occupies this lot. 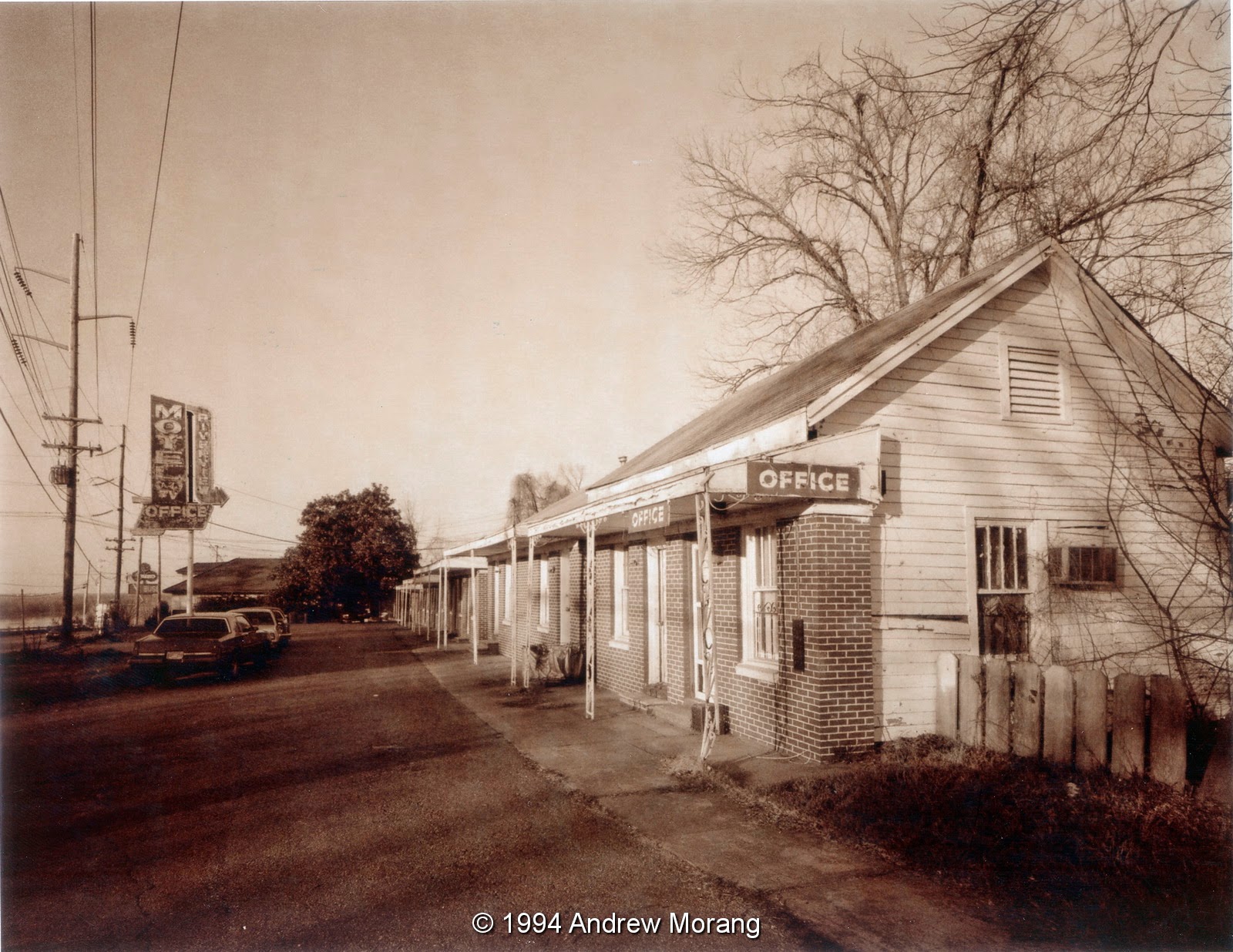 Heading south along the river, this is the Riverview Motel at 4009 Washington Street. The site is an empty lot now. This is a Polaroid 4×5" sepia instant print. 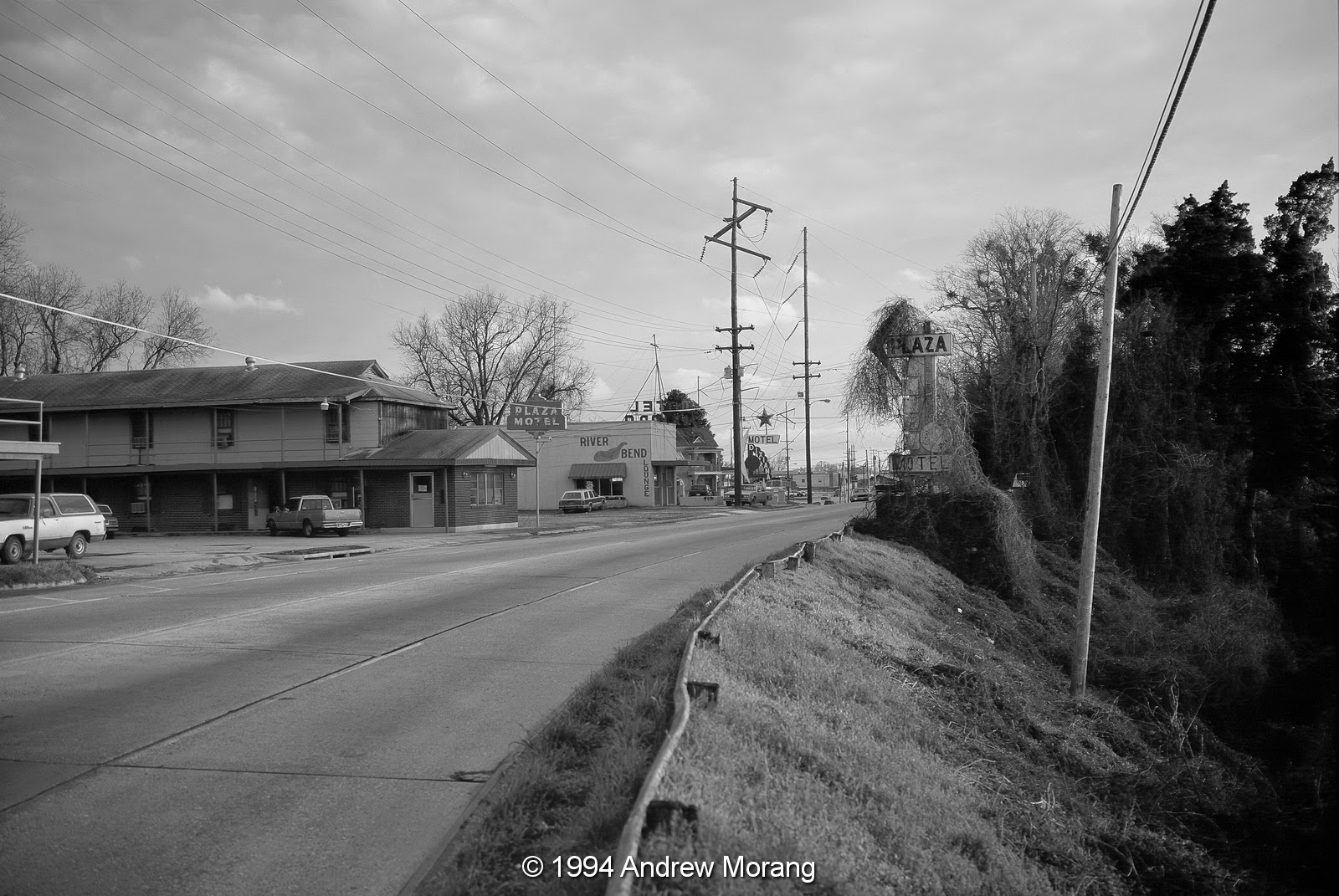 This view south along Washington Street looks about the same today. The old motel that resembles a barracks is still in business. 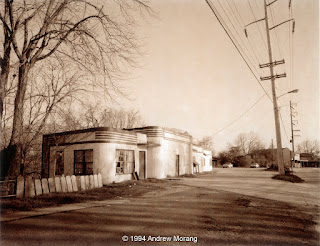 This is a former gas station converted into a motel or apartment on Washington Street, with a river view. The building was demolished in the early 2000s. This is another Polaroid 4×5" sepia instant print. 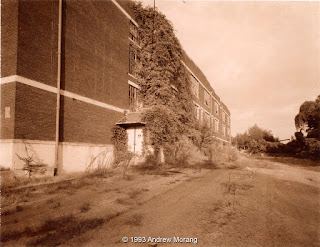 This is the Carr School on Cherry Street. The hulking building had been closed for decades and lay vandalized, an eyesight to drivers entering town via Halls Ferry Road and Cherry Street. Fortunately, it was restored in 2014 and is now used as apartments. 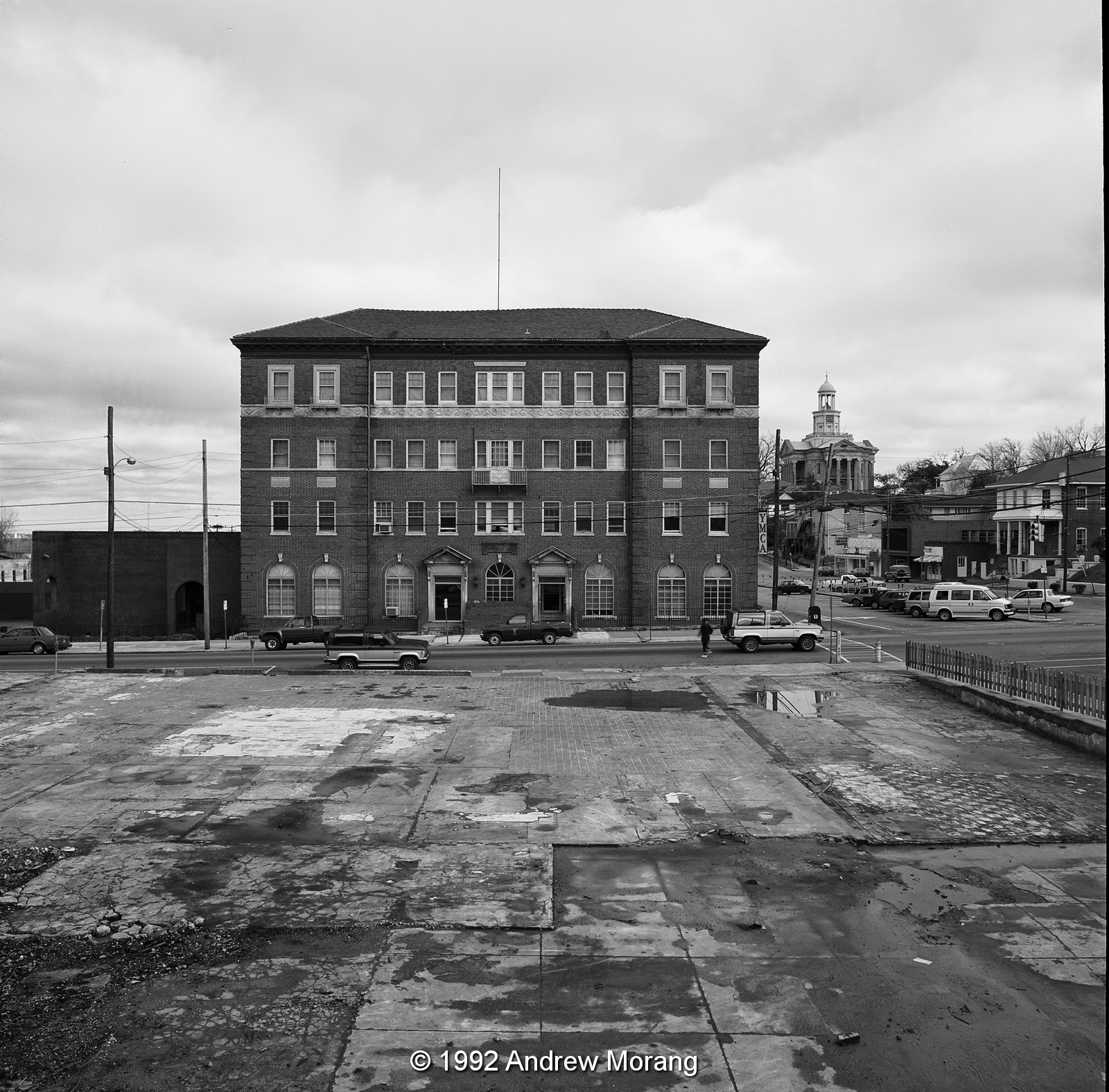 Back to Clay Street, this is the Junius Ward YMCA at 821 Clay. It has been closed for over a decade, but in 2014, I saw some renovation underway at an erratic pace. 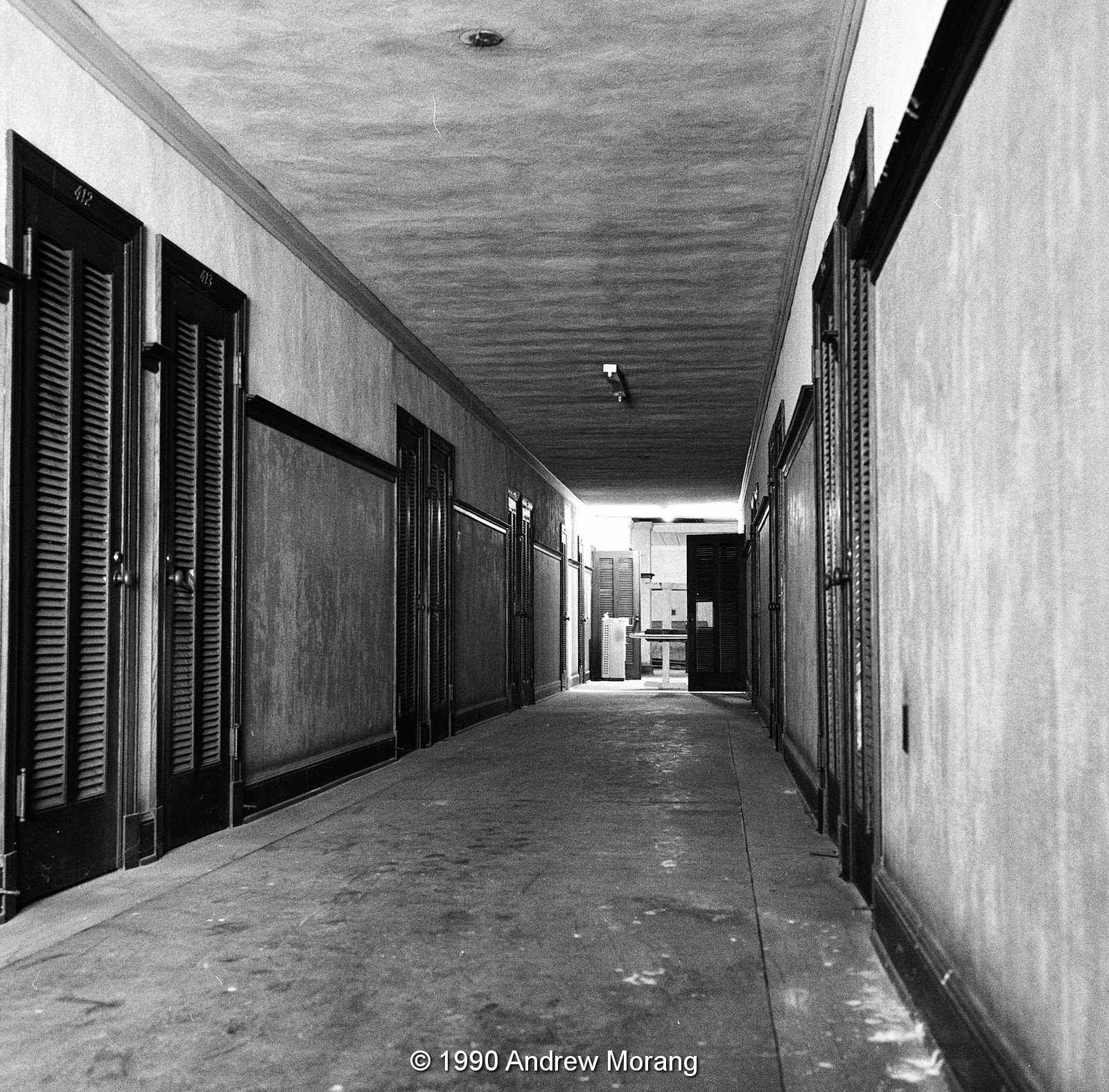 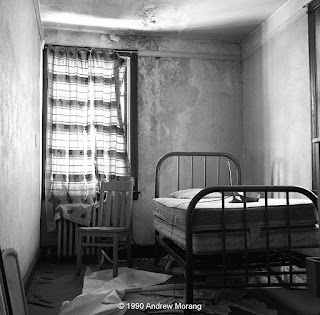 The residence halls in the "Y" were last used in the late 1970s. On contemporary standards, the accommodations were rather basic (What, no air-conditioning? Quelle horreur!), but served as temporary residence for hundreds of men who moved to Vicksburg, including two of my friends. 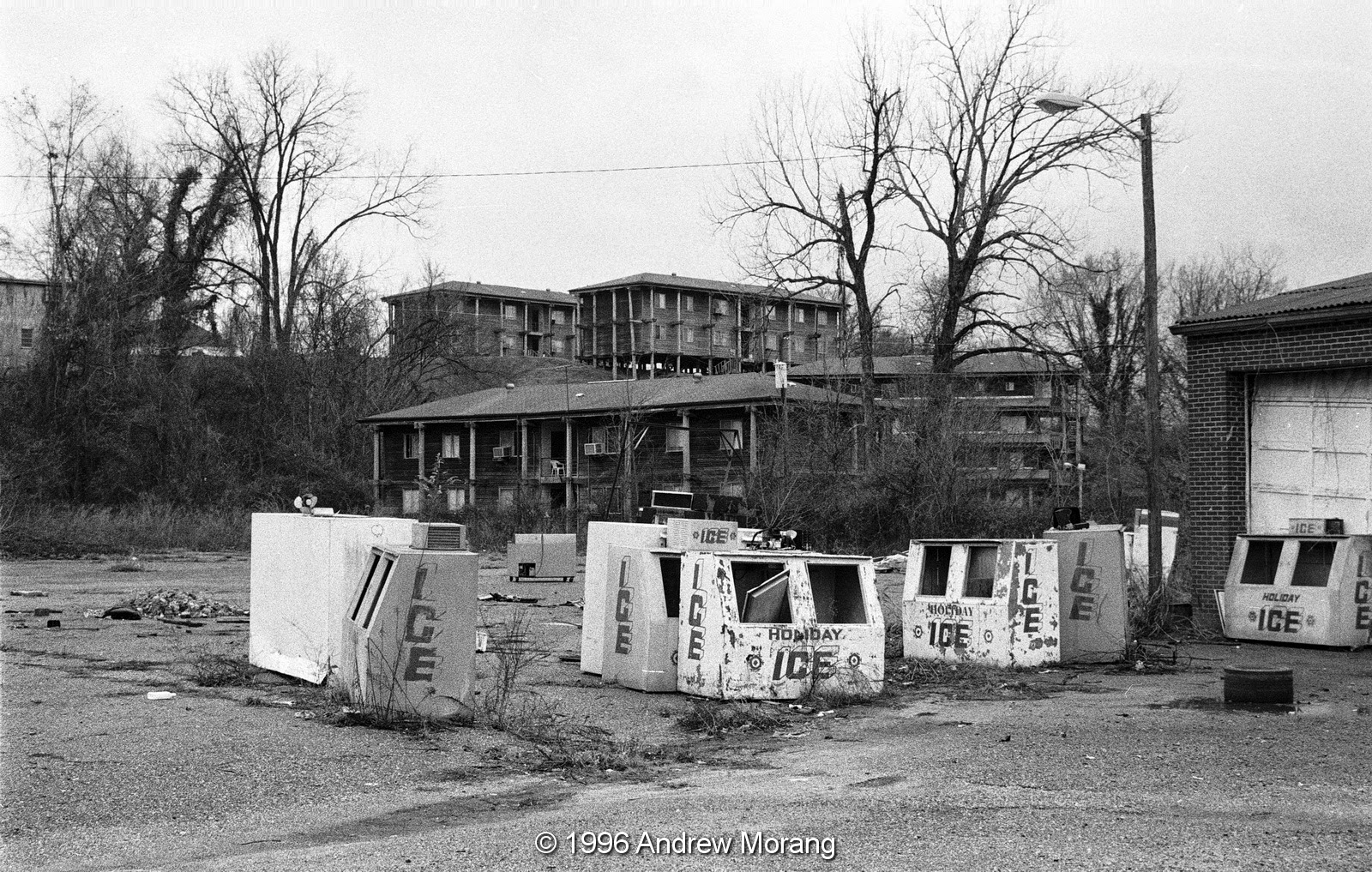 Further east, this is the lot next to the old Vicksburg Ford at 2704 Clay Street. The garage (on the right) now houses TD's Tires. The apartments at the back are an odd architectural design, suspended between telephone posts driven into the ground. The apartments are occupied by a mixed clientele. 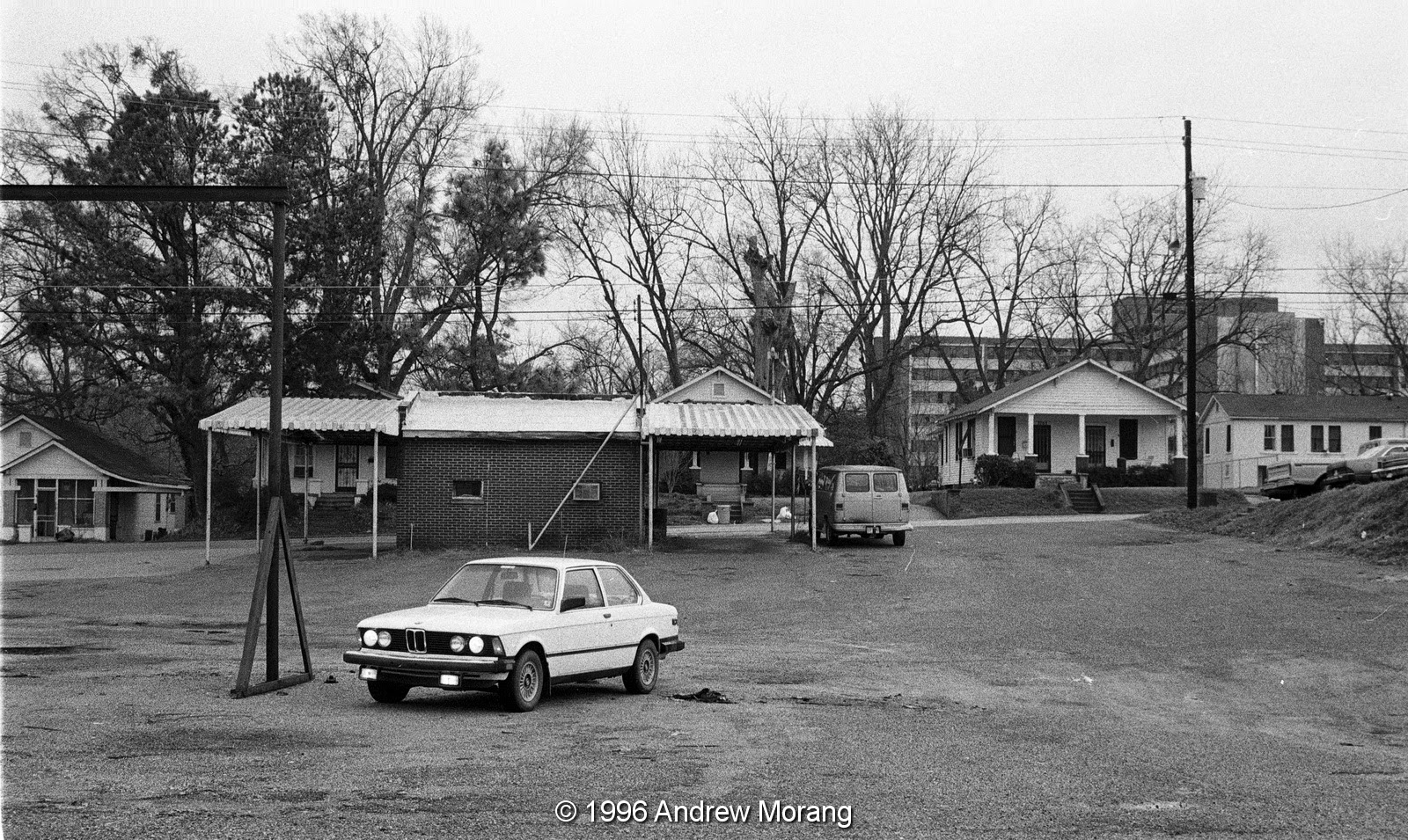 Turn around 180 degrees and look north; the old Mercy Hospital was a block away. It may have been named Parkview in 1996, but I can't remember. The little cottage at the very left, facing Clay Street, may have been the home of J. Mack Moore, the photographer who took hundreds of photographs of Vicksburg in the late 1800s and early 20th century. Mack Moore coated his own glass plates and used a large format camera. When the house was demolished, stacks of his glass negatives were found in the basement, some of which he had recycled for use as window panes. The collection is now at the Old Court House Museum. 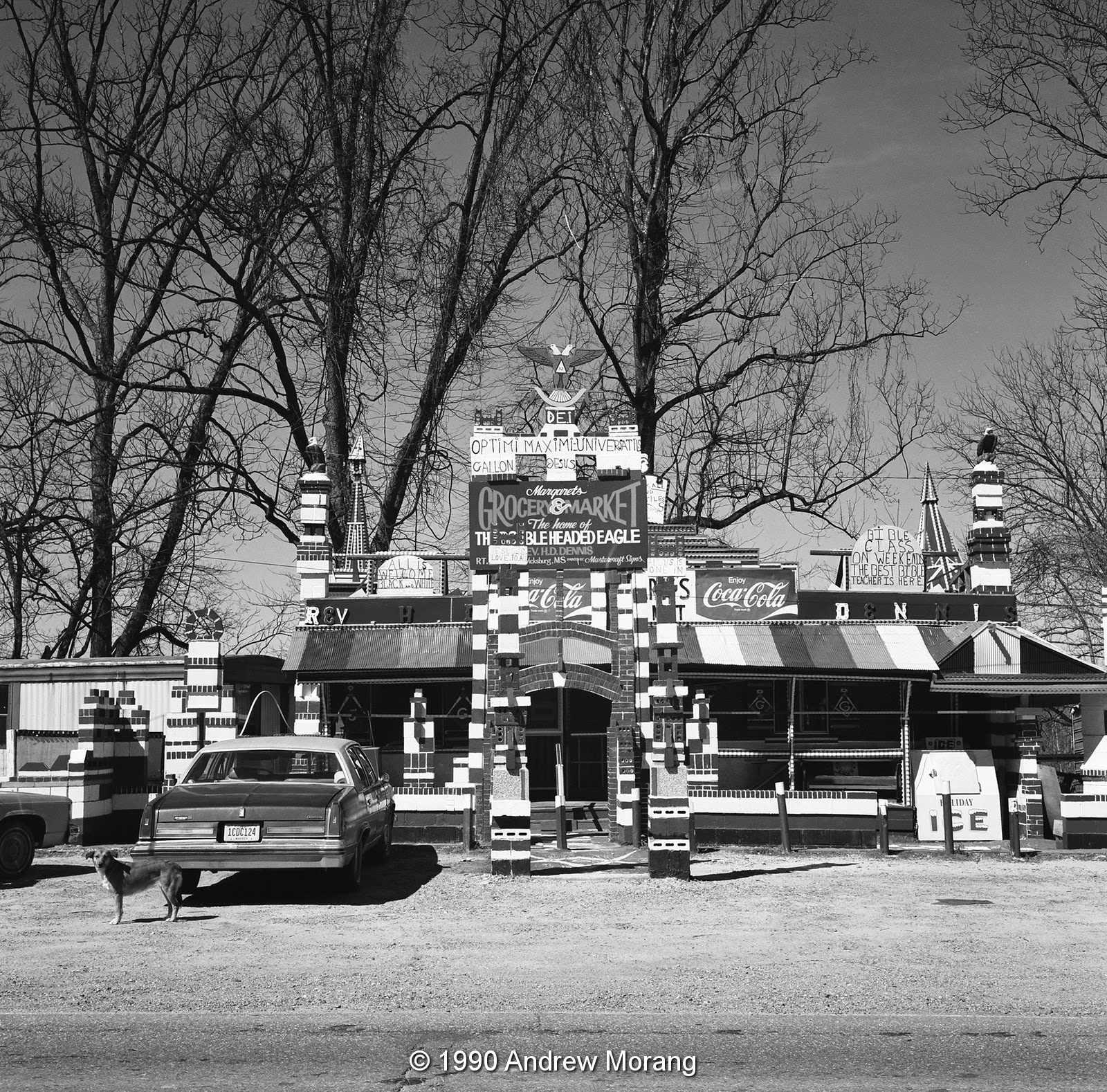 Proceed north on North Washington about 5 miles and you reached Margaret's Gro, which the Reverend Dennis had converted to his temple to God. 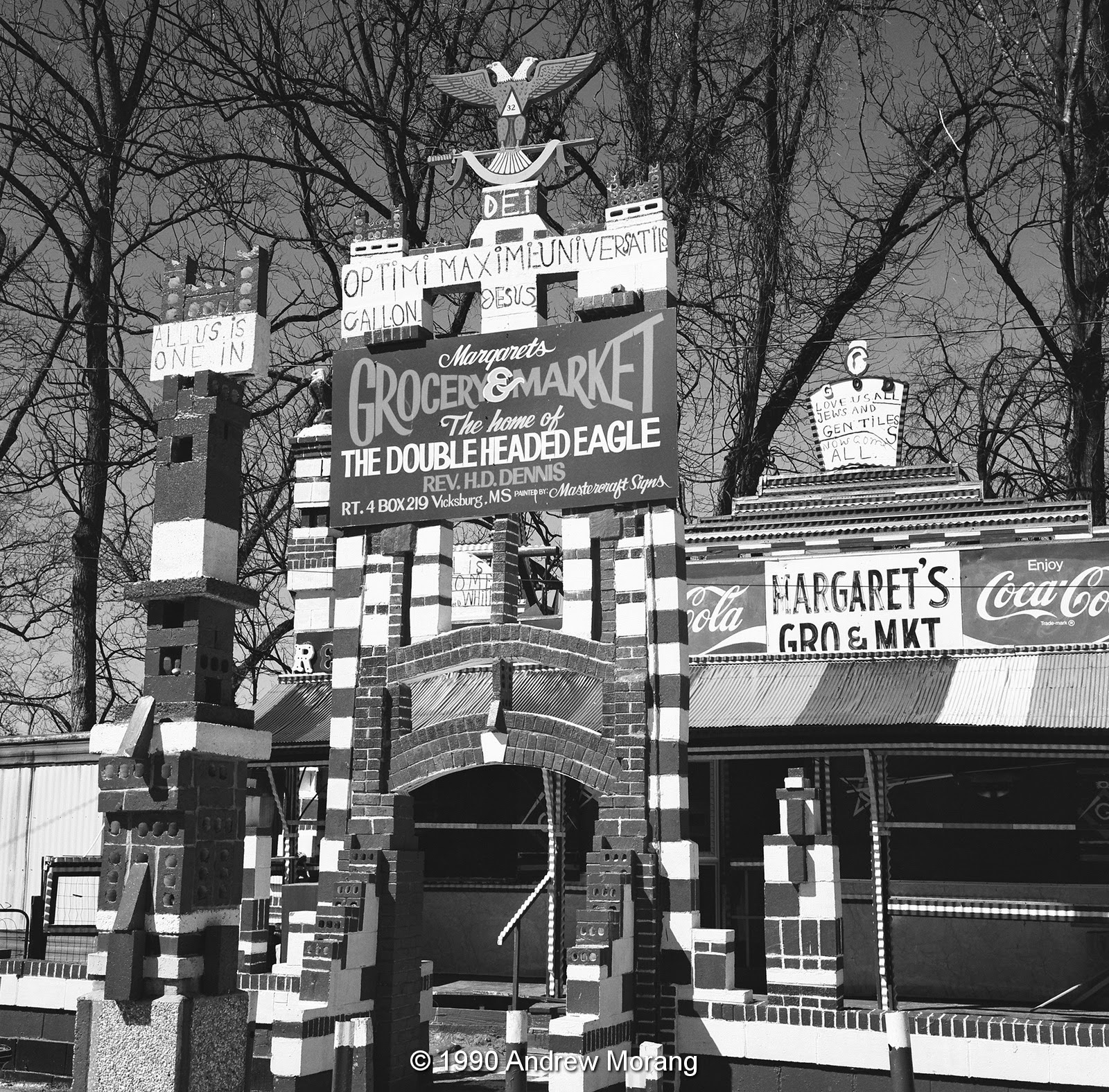 The Reverend had a creative streak with bricks, paint, wood, Styrofoam, and anything else he could glue or cement in place. He told me that he learned his brick skills from German bricklayers. He had been a prison guard for World War II prisoners and learned from his charges. Even as late as the 2000s, German tourists came to see Margaret's Gro. (Another trivia item: Germans soldiers were terrified of American black soldiers because of the gruesome stories they had been told by their propaganda machine. Therefore, they tended to be pretty docile when guarded by black soldiers.) 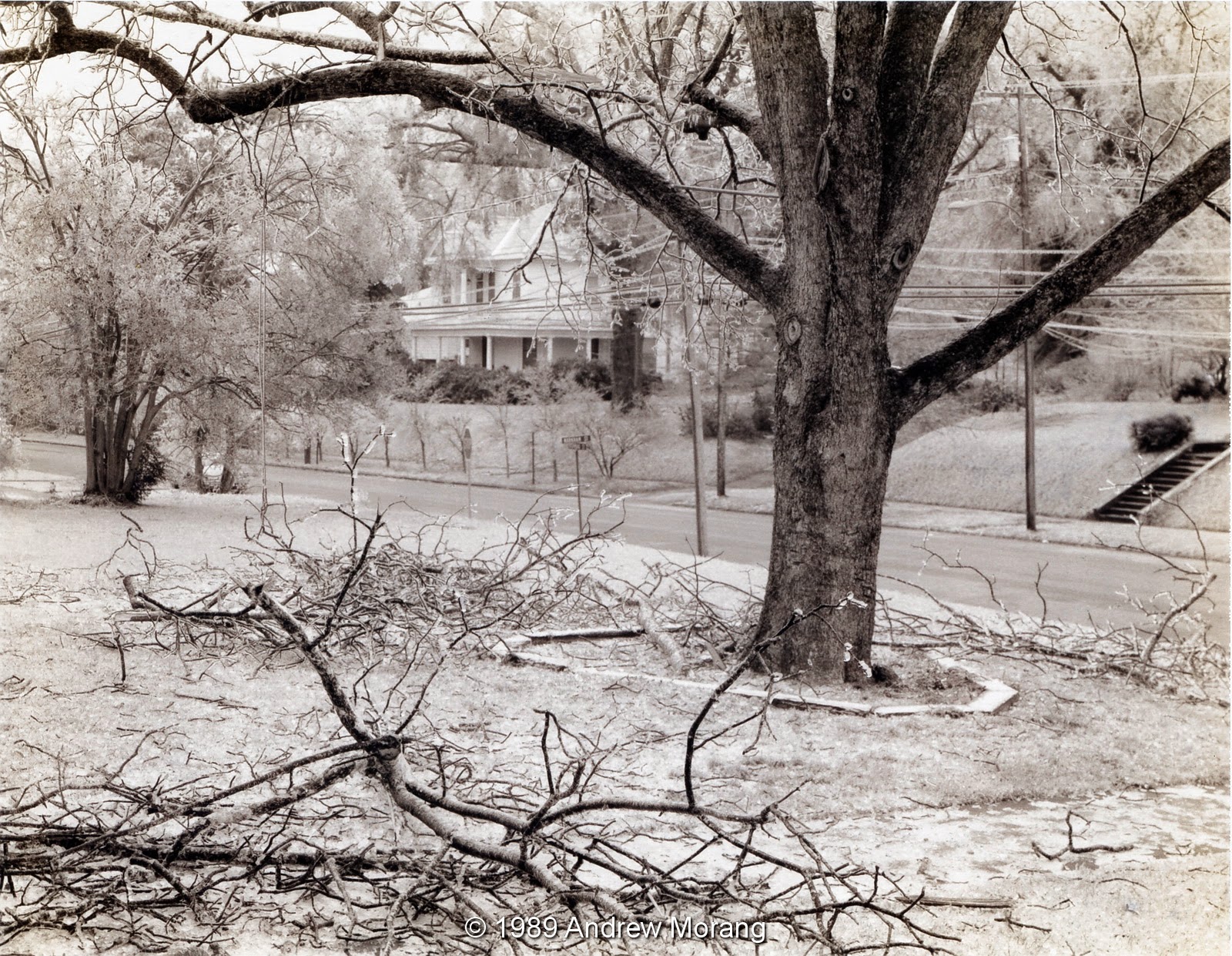 In February, 1989, an ice storm knocked down power lines all over Mississippi. Some parts of Vicksburg were without electricity for almost a week. This is a view of Drummond Street. 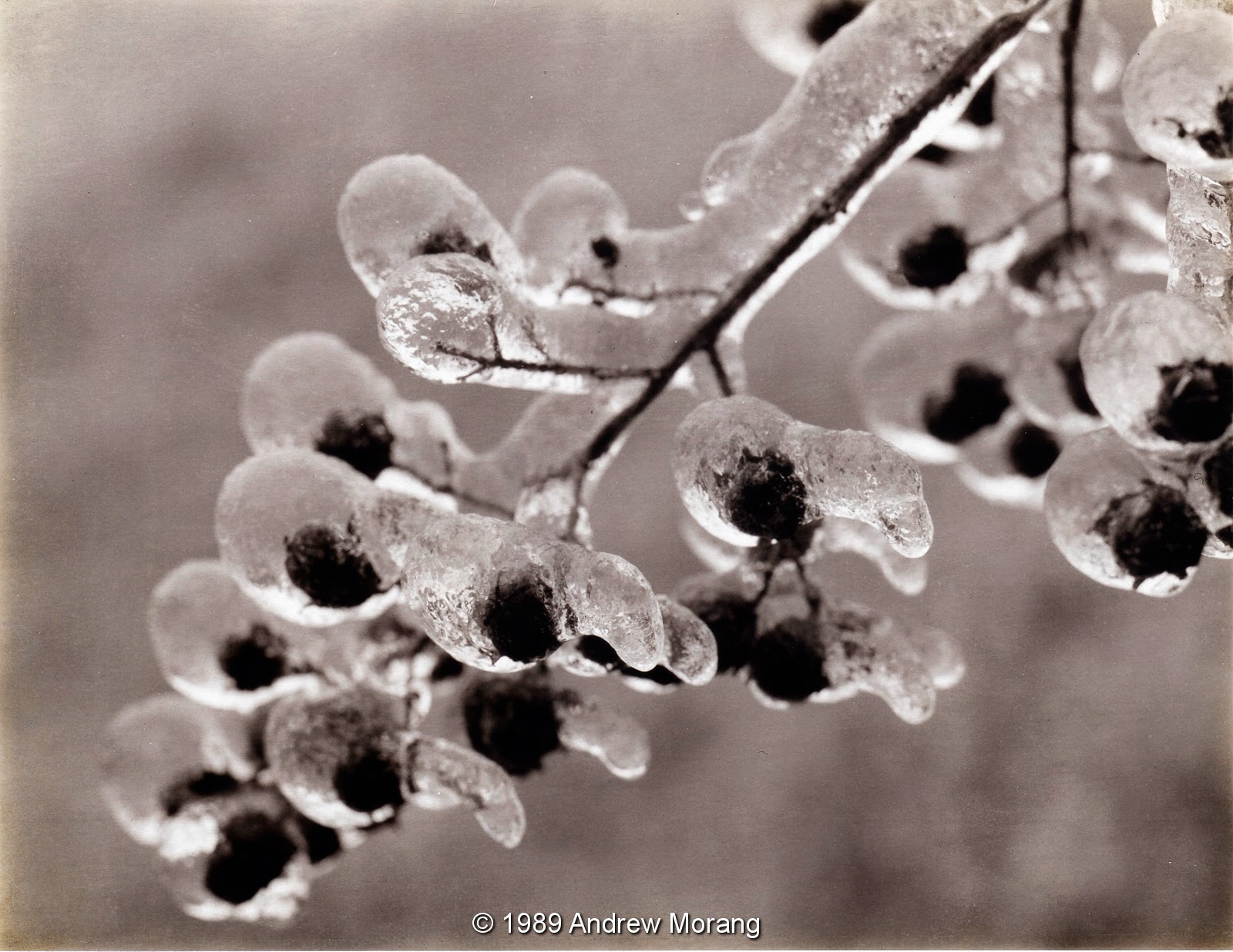 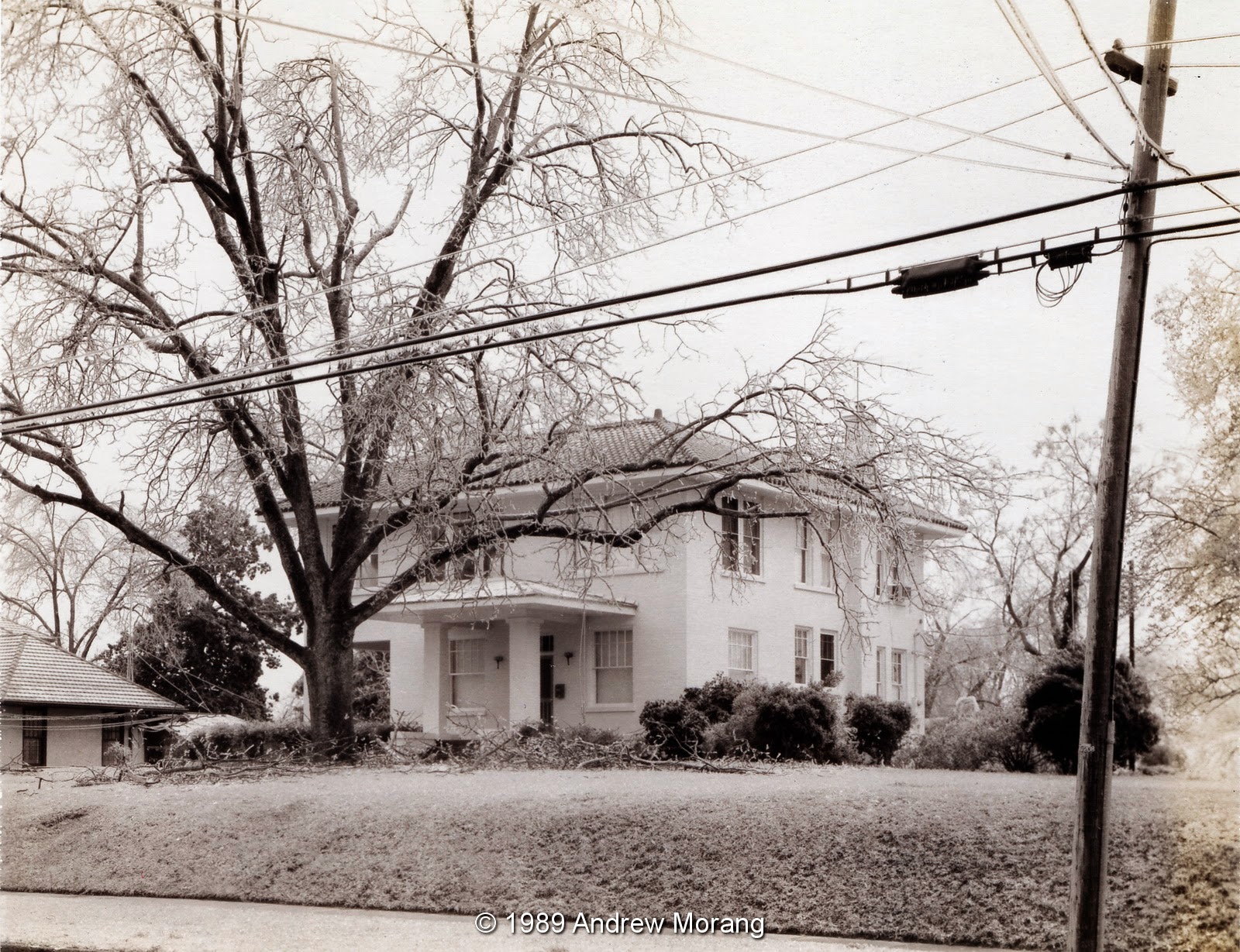 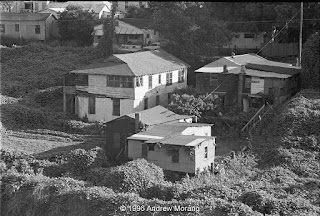 These cottages are on the slope below West Pine Street, just west of the old bus barn. The Kansas City Southern railroad tracks are just below. At one time, there was quite a community of little houses along this slope, but most have been torn down, and the kudzu has taken over. I recall some of these residents had vegetable and corn gardens.

In the future, I will scan more negatives.
Posted by Kodachromeguy at 21:22


I really wanted to develop a brief comment so as to say thanks to you for all the nice pointers you are sharing here. My extensive internet look up has at the end of the day been honored with reputable content to write about with my contacts. I ‘d admit that most of us visitors actually are undeniably lucky to be in a remarkable network with many lovely professionals with useful hints. I feel somewhat lucky to have come across the webpage and look forward to many more excellent moments reading here. Thank you once again for everything.
casinos in your country