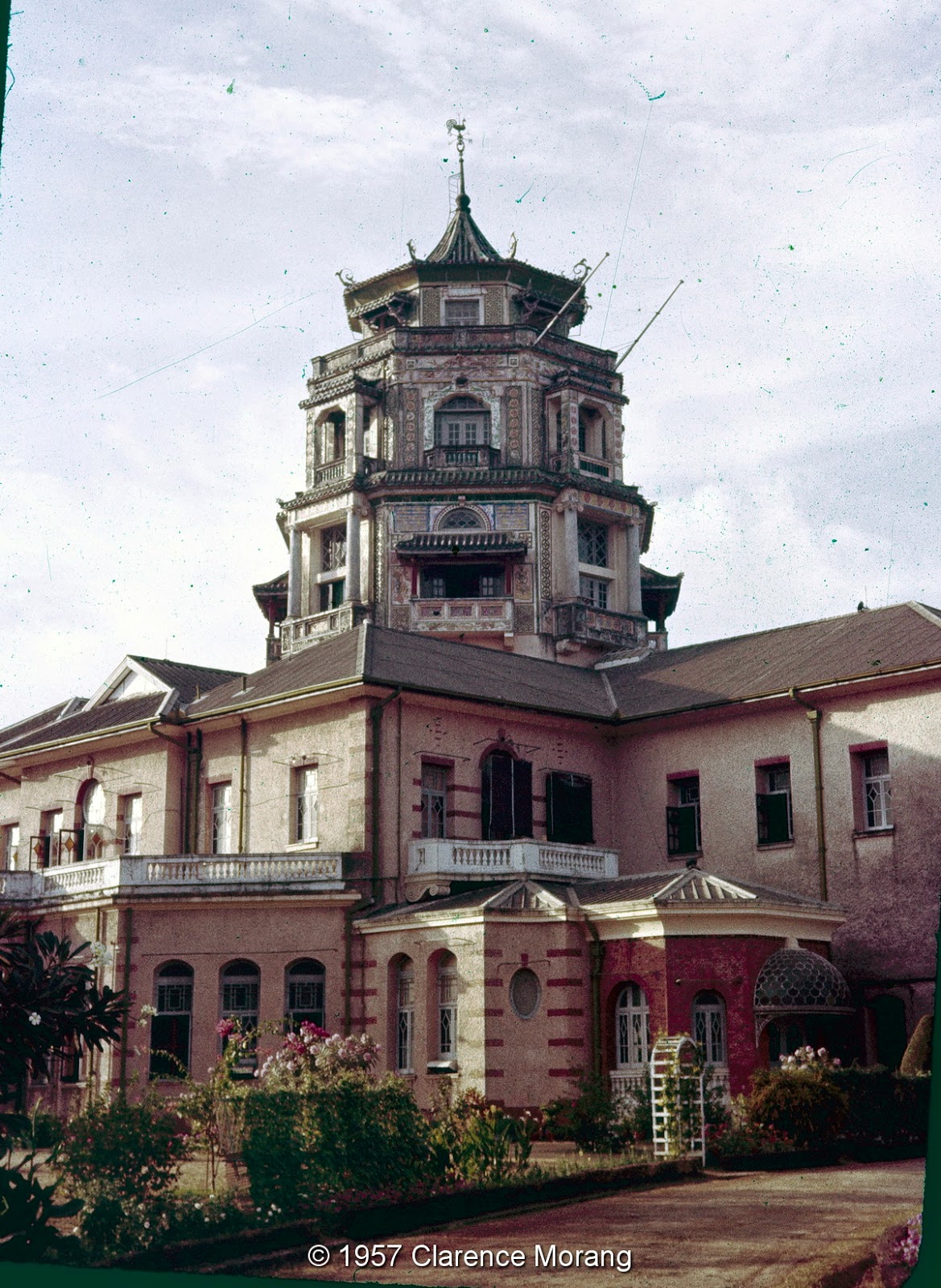 Dear Readers, this will begin a series of posts on sights and architecture in Burma, now officially known as Myanmar. I lived in Burma in the 1950s and will use this familiar name, as do many locals still. The title, "Burmese Days," comes from the novel of the same name by George Orwell, who was a police officer in the Indian Imperial Police force in Burma from 1922 to 1927. We can describe the book in more detail in a later post.

Burma was one of the British Empire's richest countries, an incredibly profitable exporter of teak, fish, petroleum, tea, gem stones, and rice. Rangoon has some really odd architecture dating from its opulent days early in the 20th century. One of the strangest is the mansion/palace built by the flamboyant Chinese tycoon, Lim Chin Tsong.

Mr. Tsong inherited a business from his father in 1885 and promptly began to expand it, eventually forming a business empire of shipping, rice-export, and petroleum agent for Burma Oil Corporation (historical note: in the late 1800s, Burma was one of the world's original major oil producers). In 1919, he was awarded the Order of the British Empire for his fundraising efforts during the Great War. In 1917, he began to build his lavish residence in the Kokkine area of Rangoon (now off Kabar Aye Road). The central part of the brick and tile mansion was designed to resemble the Fu Xiang pavilion in the Yihe Yuan (Summer Palace) in Peking (Zaw 2014). He imported materials and crafts from Italy and China, and British painters were invited to design the interior.

The photograph above is a scan of a 1957 slide from the family archives. Then, the palace was in reasonably good condition. Notice the odd juxtaposition of an English country manor on the bottom with a Chinese temple sticking out of the top. The weather vane is English, and so are the windows. The gardens were still immaculately tended in the English manner. By coincidence, this was only a few blocks from where we lived. 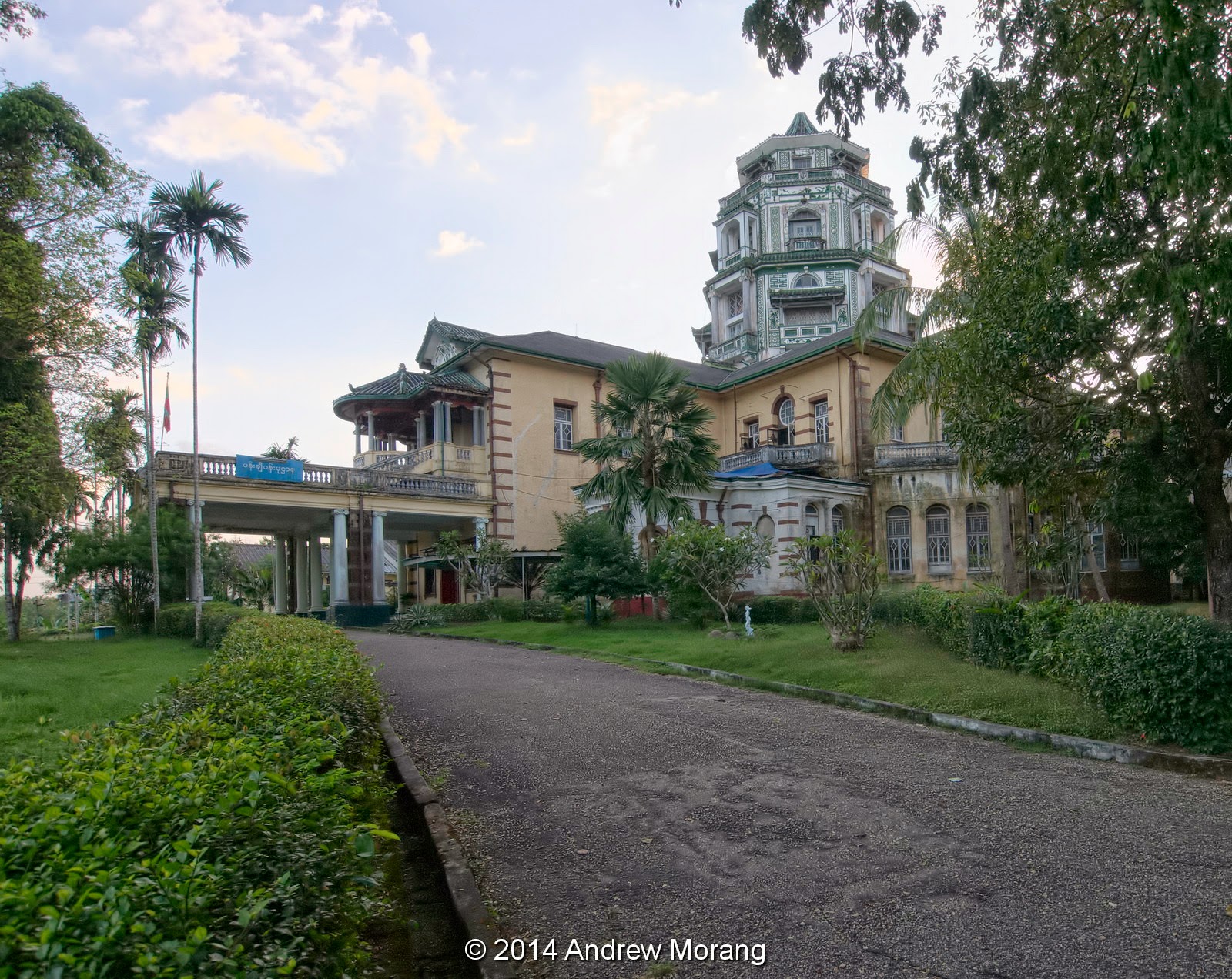 Jump to 2014; the building is still intact, but in poorer condition. 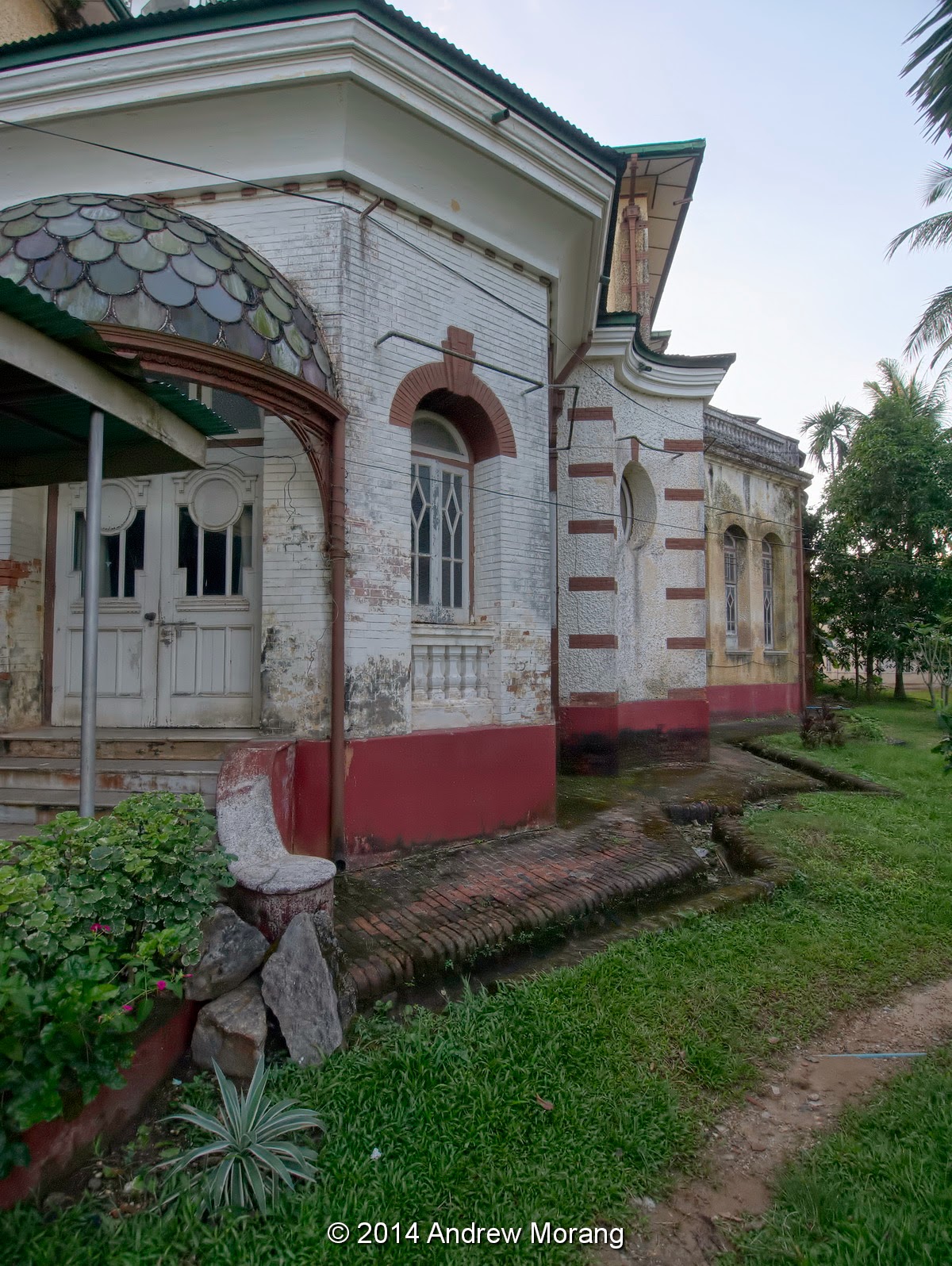 Look at the gorgeous glass art nouveau cupola over the garden door, now unfortunately partly blocked by a steel cover over the walkway. 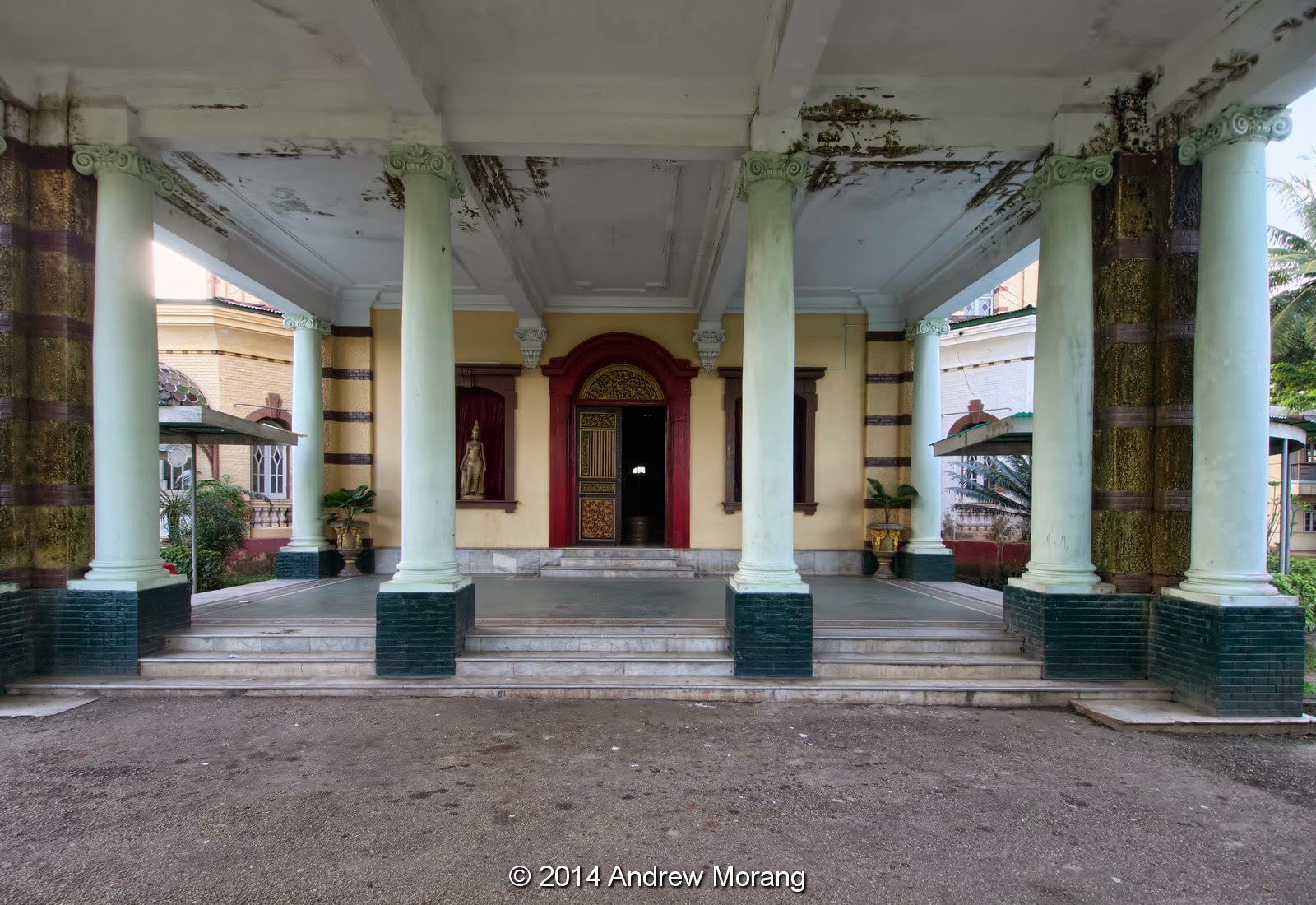 The main entry featured a colonnaded carport. Once, the cream of society, all elegantly-dressed, arrived in Rolls Royces or carriages. 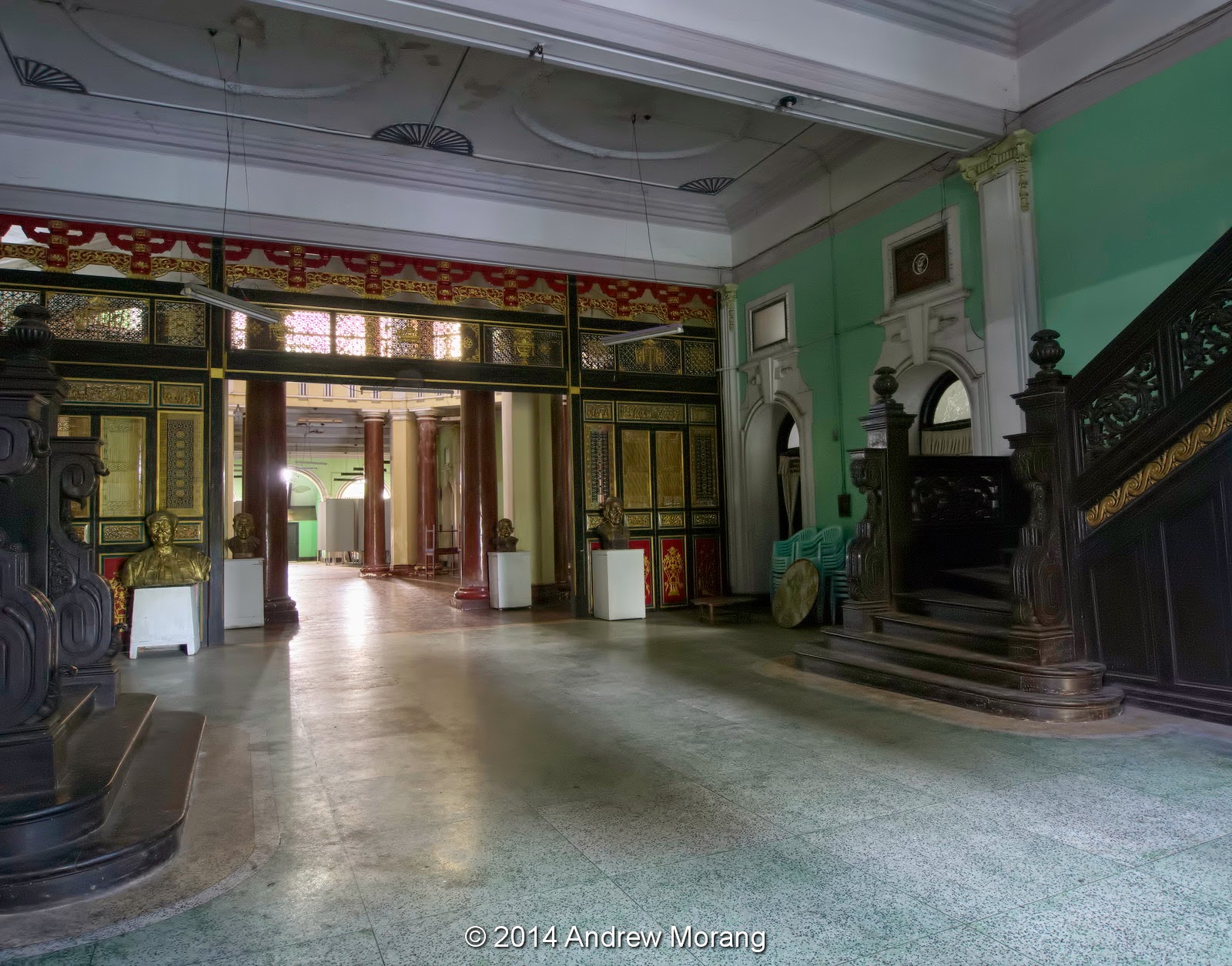 Even after a century, the woodwork and plaster trim is mostly intact. But who knows what decorative arts have disappeared. 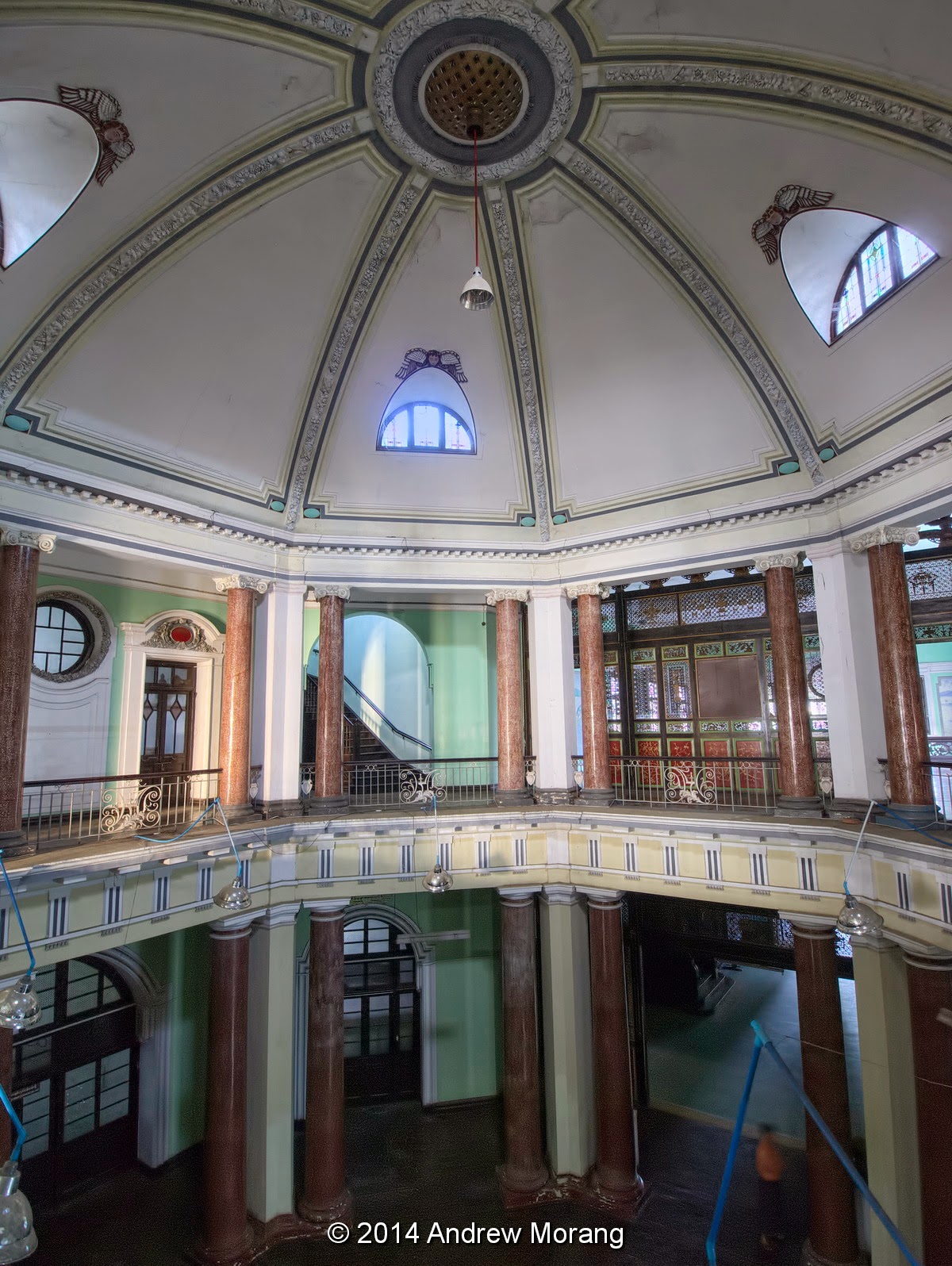 The center atrium was 3-floors high. The temple portion with the 2 upper floors is supported by the granite pillars and dome - impressive engineering for 1917. I tried to go upstairs, but the door was padlocked. 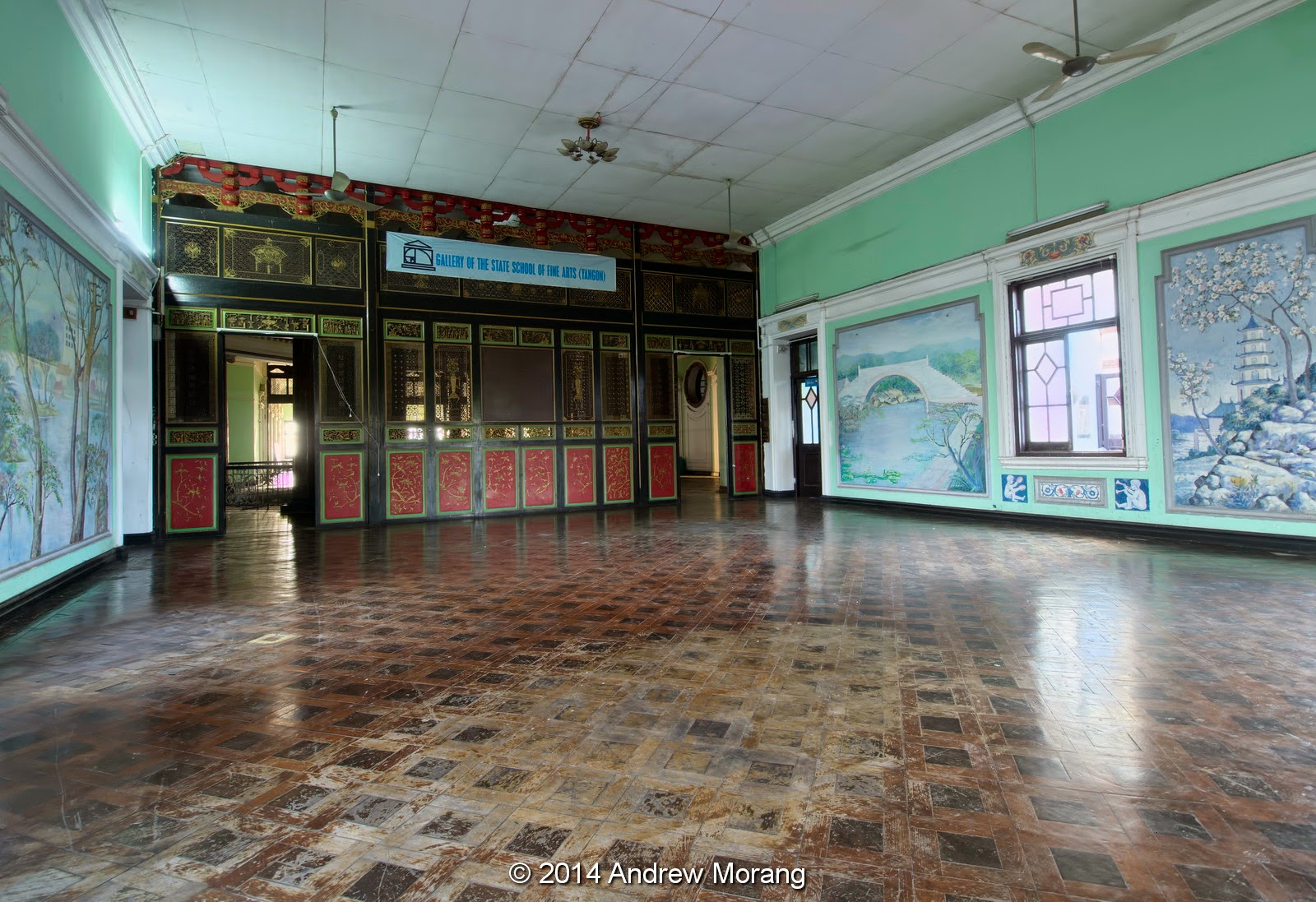 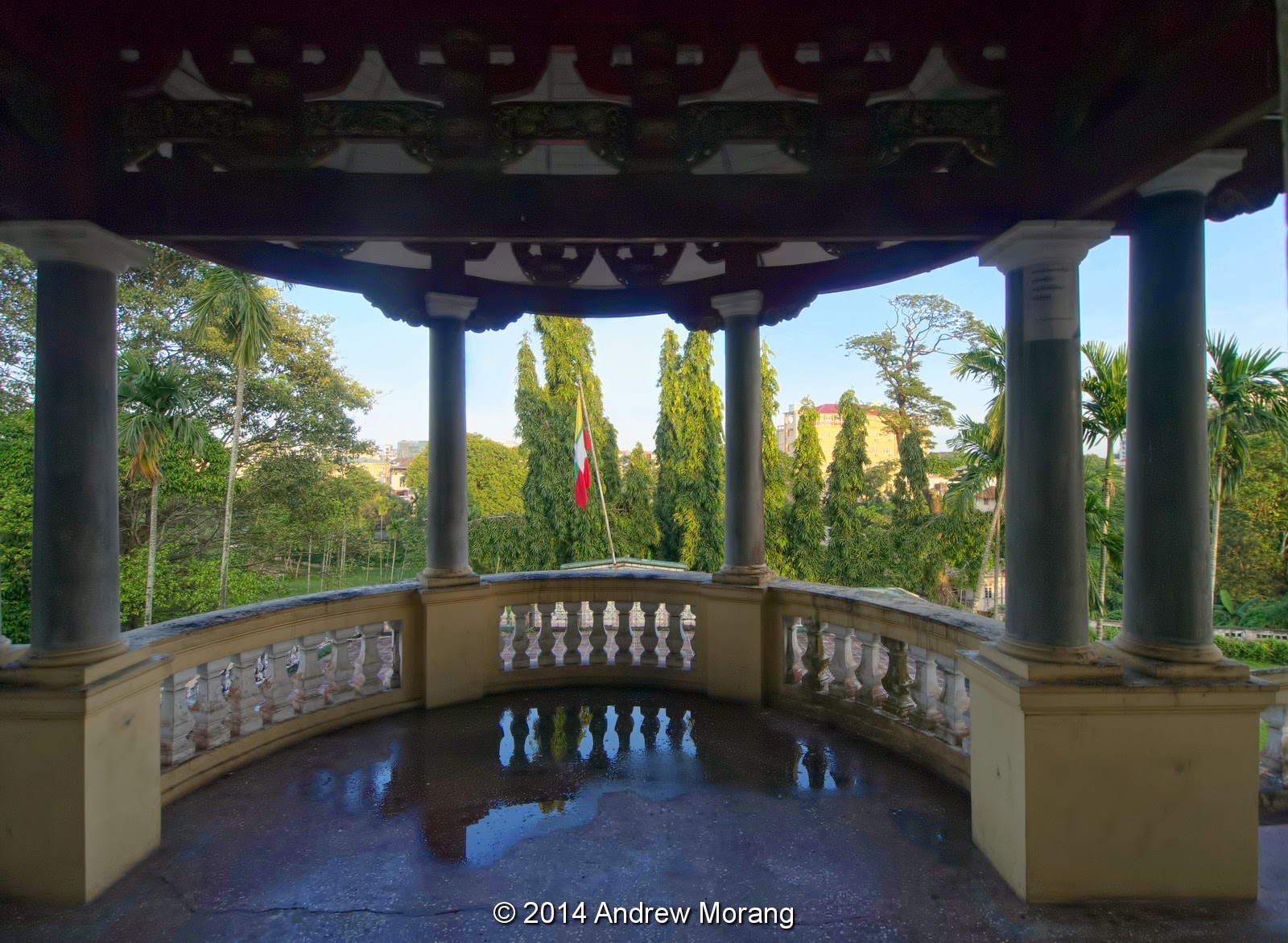 This was the second floor balcony, with a view of the formal gardens. Unfortunately, Mr. Tsong had only three years to enjoy his view and magnificent house. His business concerns began to unravel in 1921, when the British government banned rice sales except to India, and soon he had to borrow money from friends. In 1923, only three years after inauguration of the house, he passed away, a broken man.

After Mr. Tsong's death, the house went to a Japanese creditor and was used by the All Burma Broadcasting Station during the Japanese occupation of 1941-1945. It finally went to the Burmese government in 1950, who used it as a guest house. Currently, the Fine Arts Department under the Ministry of Culture maintains offices and an art and architecture school on the premises (Zaw 2014). 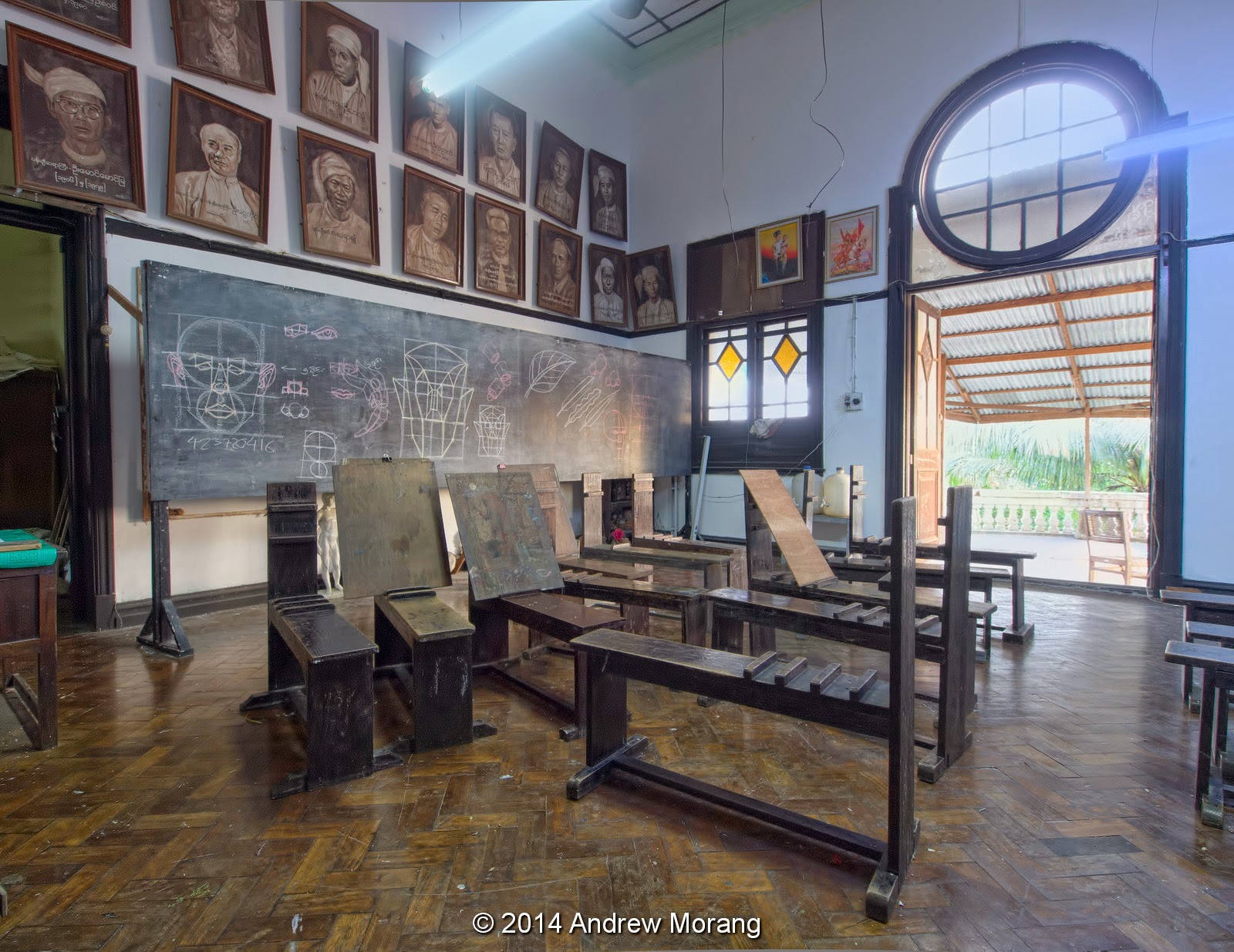 The afternoon we explored, the building was almost deserted. A few students were doing something on computers in some offices, but the drawing rooms were empty. 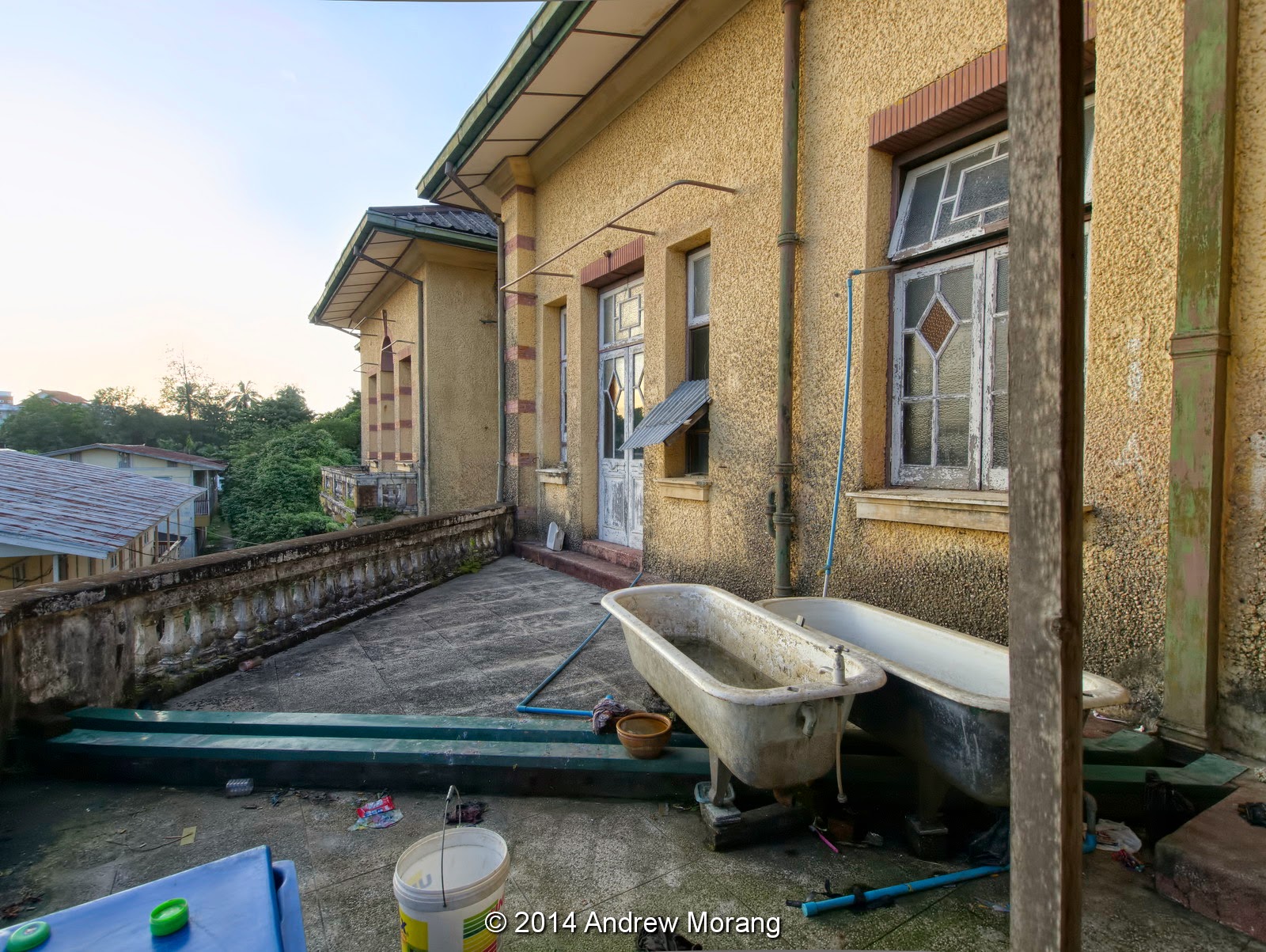 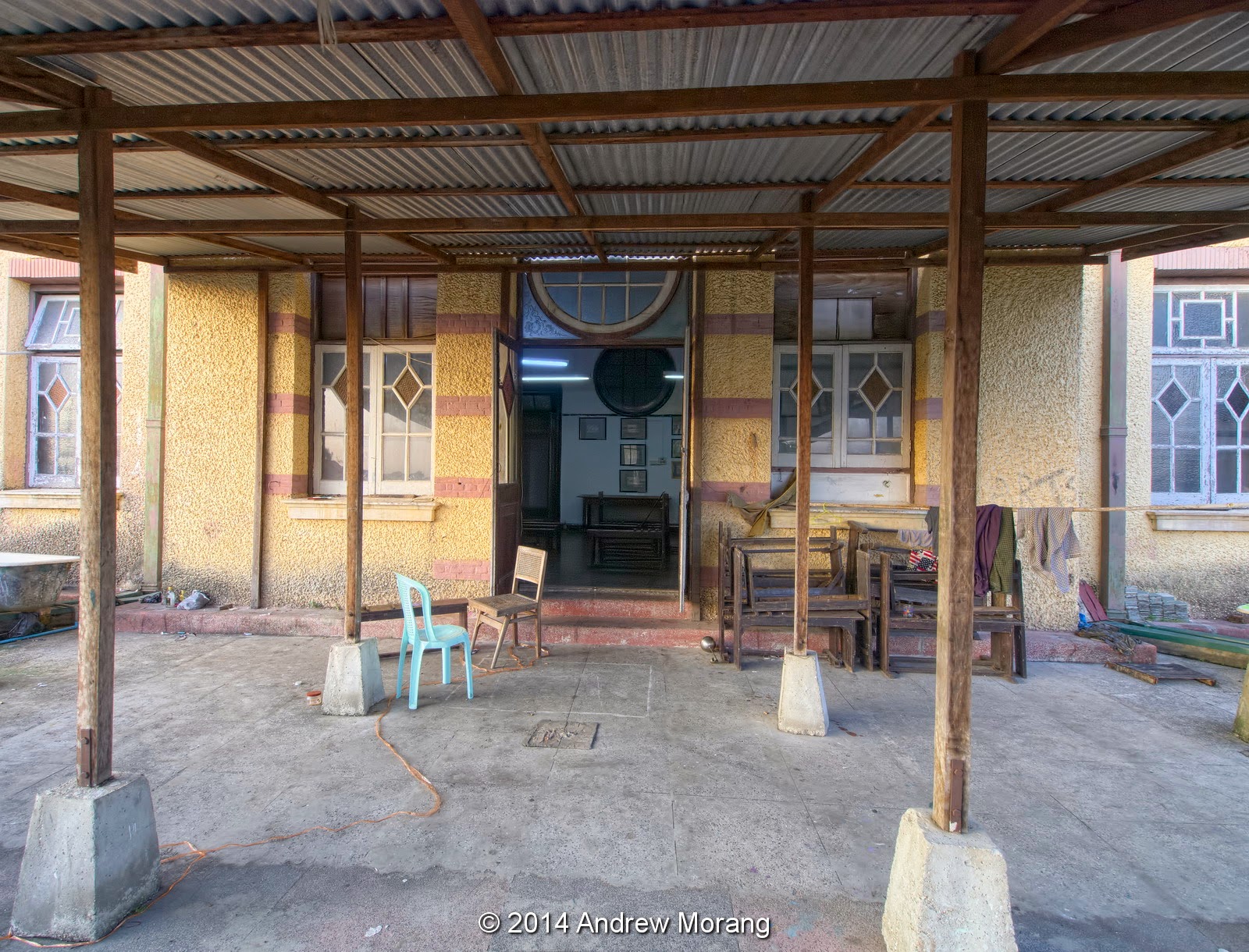 The porch adjacent to the drawing room is rather funky. Do they take baths and do laundry out there? I had fun exploring and taking pictures, but then someone told our guide that photography was forbidden. Oops, too late.

Fortunately, the the Lim Chin Tsong palace has been designated as heritage status in 2014 by the Ministry of Culture, with the Archaeology, National Museum and Library Department to take responsibility to maintain the building. This unique memory of an eccentric entrepreneur deserves some tender loving care. 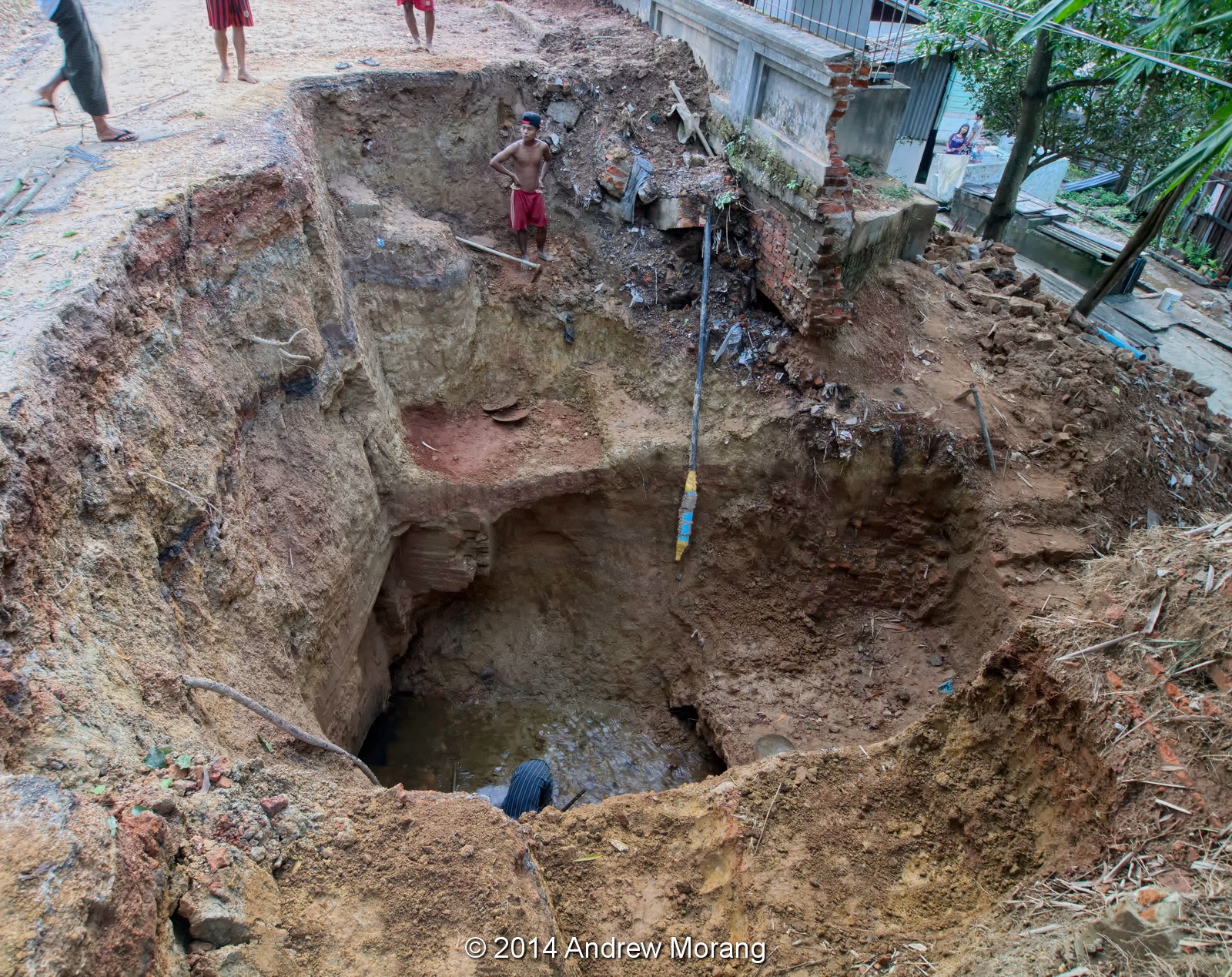 Final note: on the approach driveway, workers had dug a deep pit to expose the sewer. Look at the construction: arched brick, just like the sewers in London in the 1800s. Also note: no hardhats, steel boots, or safety harnesses. Hmm, the walls are not braced, either.

The 1957 photograph was taken on Anscochrome film with a Leica 3C camera with 50mm f/2.0 Summitar lens. The 2014 photographs are from a Panasonic G3 camera with 9-18mm Olympus lens, with RAW files processed in PhotoNinja software.
Posted by Kodachromeguy at 21:07


Thanks for posting this ... perhaps it will be searched out and found by companies looking to fill web analytics roles. I agree with your descriptions :)
casino bonuses