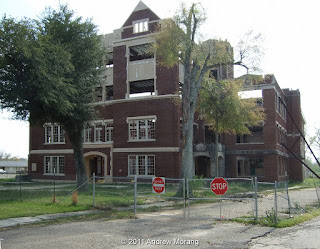 Thomas Rosell wrote an article for Preservation Mississippi on November 18, 2015, titled Not Good News from Hattiesburg. He documented the continuing collapse of the historic Easton High School. Thomas's article jogged my memory, and I found some photographs that I took in 2011 during a quick drive through town of the Old Hattiesburg High School at 846 North Main Street. 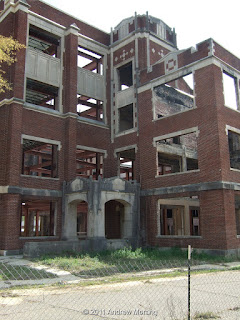 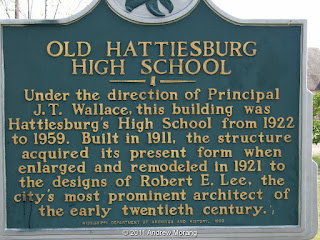 This must have once been a handsome and proud building. I had never seen it before and was struck that such an edifice could be abandoned so carelessly. I read in the Hattiesburg American that Hurricane Katrina caused severe damage in 2005, followed by arson in 2007. 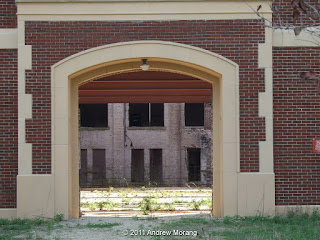 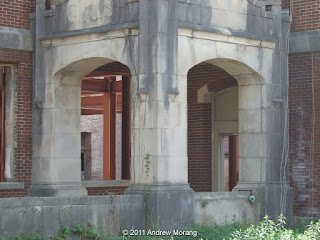 I was alone and did not want to venture inside, but I took some photographs of the doorways. Notice the steel bracing behind the handsome limestone entry porch. Hmmm, do our contemporary mega-schools have limestone entry halls? 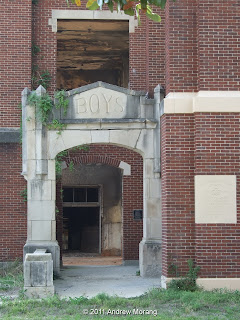 Like many schools in the early 20th century, there were separate Boys and Girls entrances. But there may be good news: a November 16 article in the Hattiesburg American describes a proposal to develop the building into "age-restricted" housing. 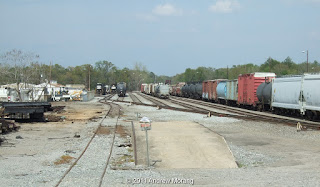 On a more optimistic note, the Italian Renaissance Revival-style Union Station and New Orleans & Northeastern Passenger Depot, at 308 Newman Street, has been restored and serves as an intermodal transportation center. The city acquired the building and land in 2000 and completed a 5-year, $10 million renovation in 2007. The Grand Hall is now used for art exhibits and social events. It's nice to see gorgeous old buildings like this still in use and respected for their architectural uniqueness.

Photographs taken with a compact FujiFilm F31fd digital camera.
Posted by Kodachromeguy at 15:19

After seeing the outcome of the Pascagoula High School, I think this will be a good thing for Hattiesburg High. As far as the age restriction that results from a source of the projects federal funding. The Hattiesburg American article could have included that there will be preservation restrictions as well because I imagine the project is going to apply for preservation tax incentives.