From the Archives: Tourist Pics of Vicksburg, Mississippi 1985-1992

While looking through a box of old negatives, I saw a film from my 1985 job-hunting trip. At the time, I lived in Houston, Texas - absolutely flat and topographically boring. But Vicksburg was an interesting place, with its history and its setting on the bluffs above the river. Not knowing if I would move here, I took snapshots around town. This will be a quick tour of some of the places a new resident might see. 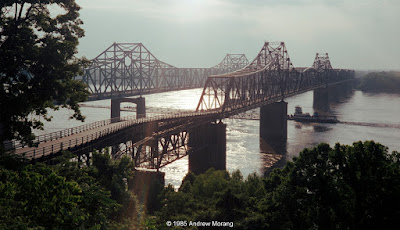 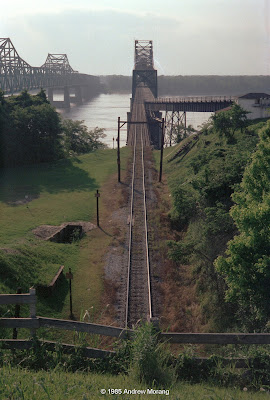 Driving from the east, many visitors first see the Big Muddy from the Mississippi Visitor Center. The scene is timeless - these photographs could be 1985 or 2019. I had driven here from the west and had therefore crossed on the I-20 bridge from Louisiana. In the late-1980s, the old bridge was still open to car traffic.
By 1990, as I recall, the old bridge had been closed to traffic, but pedestrians could walk on it. This is a negative from a Kodak Stretch, which was a single-use (i.e., disposable) camera which purported to be a panorama format. That was deceptive: it had a 2-element, 25mm f/12 lens lens that projected onto a narrow strip of the 35mm frame, about 13×36 mm. However, I am surprised how well the Kodak Gold 200 film did with this crude lens. The APS film system also tried this fraud: the so-called panorama was just a thin strip in the middle of the frame. The entire frame was exposed but the processing lab automatically printed the thin strip.
The view from the overlook north of the Visitor Center is different now because the Ameristar Casino is in the foreground at the river's edge.
I think this is the bend in the Mississippi where the Yazoo Canal comes in from the north.
In the 1980s, the old Vicksburg hospital was a concrete shell, standing where the police department is now located. The view north to the City Hall and Post Office was rather boring. The architectural abomination on the right is now BancorpSouth Bank, but I am not sure what it was called in the 1980s. 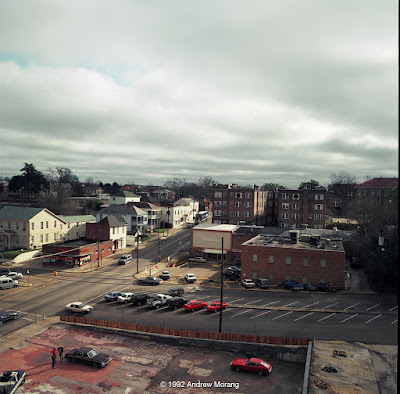 Continuing north, this is a view of Clay Street at the intersection with Monroe. The Aeolian Apartments in the upper center were still rented as apartments in 1992. 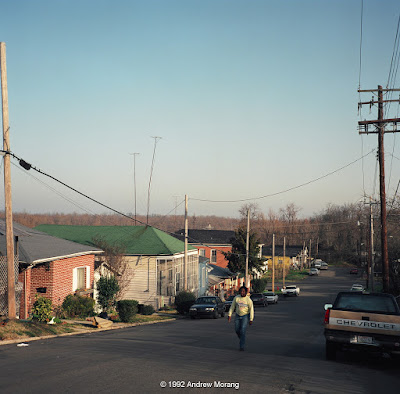 This is Walnut Street looking north. I am not sure which of these houses are still extant.

Velchoff's Corner Restaurant & Miller's Still Lounge formerly occupied the building at the corner of Washington and Grove Streets (Summerlin and Summerlin 1995). I only ate there once and cannot remember when it closed. Look up Grove Street and you can see a car repair shop on the left. That building is gone, and again, I do not recall when it was demolished. The lot on the left was once occupied by the Masonic Temple, which was torn down in the mid- or late-1970s.
Today, the corner building houses Attic Gallery and the 61 Coffeehouse. Daniel Boone runs 61 and provides the best coffee in town (except at my house....). And he employs charming coffee ladies. Look north along Washington Street and you see a building in the distance. Decades ago, this was a club and various other businesses.
No. 913 Washington Street was once an automobile showroom. The second building, possibly a 7-Up bottling plant at one time, was unceremoniously demolished by City of Vicksburg in 2007.
The 1985 photographs are from Kodak VPS color negative film using a Rollei 35S camera. Its 40mm f/2.8 Sonnar lens was amazing for such a compact camera.

Summerlin, C. and Summerlin, V., 1995.  Traveling the Trace: A Complete Tour Guide to the Historic Natchez Trace from Nashville to Natchez. Rutledge Hill Press, Nashville, Tennessee.
Posted by Kodachromeguy at 08:00

Those are some really fine bridge shots. Albuquerque has quite a few bridges spanning the Rio Grande, but they aren't the kind that inspires photography.

This post is good enough to make somebody understand this amazing thing, and I’m sure everyone will appreciate this interesting things. Pedro