The Bonner Campbell Institute, formerly the Southern Christian Institute, sits on a bucolic piece of property off Hwy 80 west of Edwards, Mississippi. The Preservation in Mississippi blog recently presented an excellent historical summary on the Institute:
http://misspreservation.com/2010/12/01/abandoned-mississippi-southern-christian-institute/

The essay inspired me to return and look around the site. I had driven past on Hwy 80 many times before, but the gate was always closed and I never saw any activity there. But a couple of Sundays ago, the gate was open, the light was mellow, and it seemed like a good afternoon to explore. 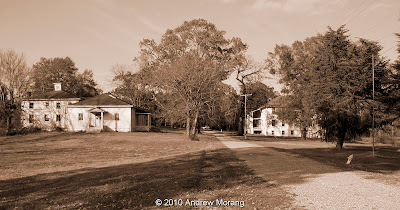 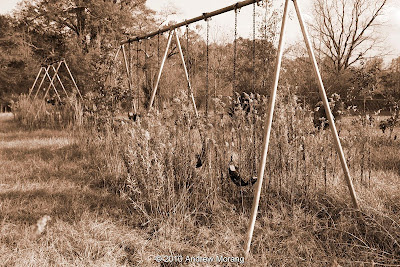 The land is beautiful. Hawks and turkey vultures soar overhead, song birds twitter in the trees, the oaks are full and luxurious. Someone mows the grass, but the place still has a "Land that Time Forgot" feel to it. As E.L. Malveney wrote, "The campus again saw new life when it became Bonner Campbell School of Religion, an arm of the A.M.E. denomination, in 1971. Used mainly for church retreats, but also more regularly as a Head Start center until around 2000, the owners have struggled in recent years to keep the campus up." Sadly, this last sentence says it all. The buildings, which look reasonably intact from a distance, are all suffering for decay, storm damage, and some degree of vandalism. 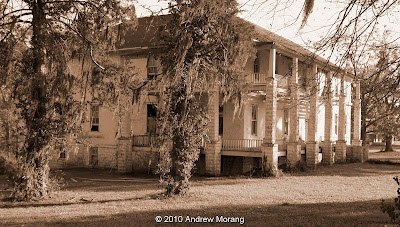 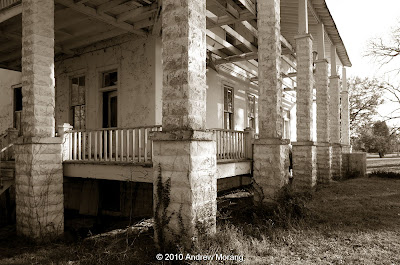 The first structure you come to is a handsome 2-story pillared building with wrap-around porches. This was Smith Hall, a girl's dormitory. Part of the roof on the north side has collapsed and the porches are rotting. (Update January 2018: this building no longer exists.) 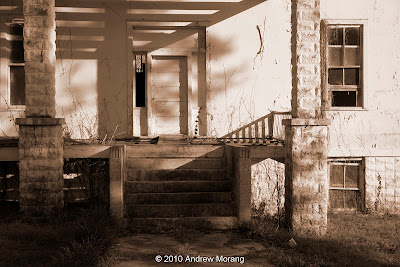 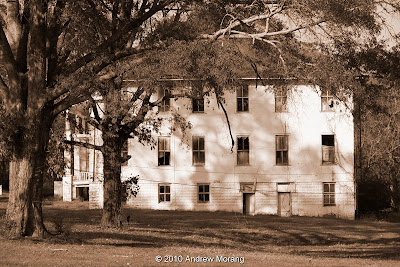 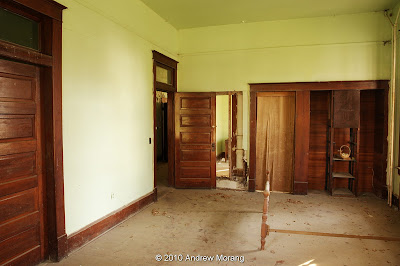 The inside was elegant in its day. Look at this handsome room with multi-paneled pine doors, but it does feature the infamous institutional lime green paint. 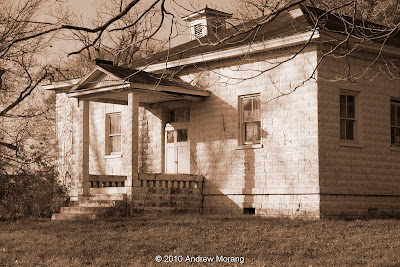 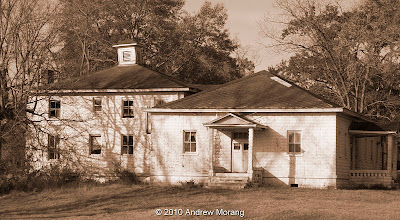 Allison Hall was the kitchen and cafeteria complex. An older 2-story building is to the rear, with a newer 1-floor cafeteria in front. Both were faced with concrete blocks molded to look like cut stone. 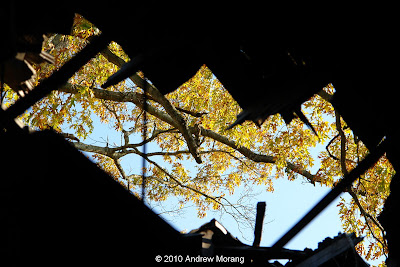 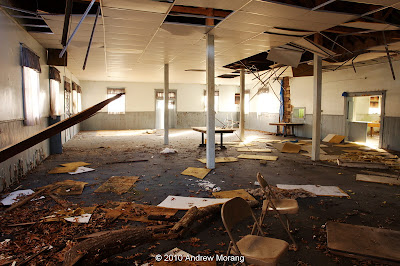 Here, too, some pretty serious decay is underway. A tree limb crashed through the roof of the cafeteria and the interior is open to rain and the elements. 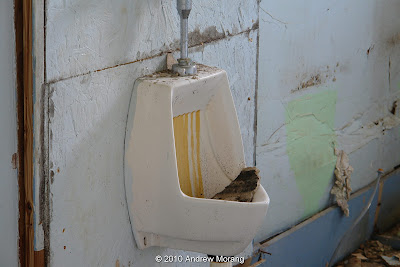 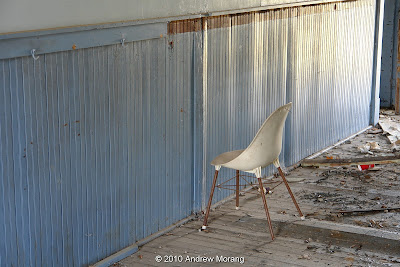 I ventured inside and saw typical institutional halls and toilets. But these ones were blue, not the sickening green you see in most institutions. 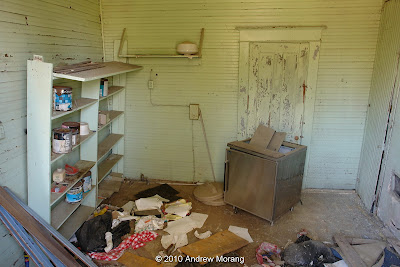 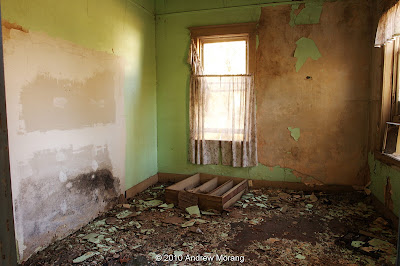 The building in the back contained living quarters, I presume for the cook staff. I've seen much worse, making me think these building were intact and occupied less than 10 years ago. 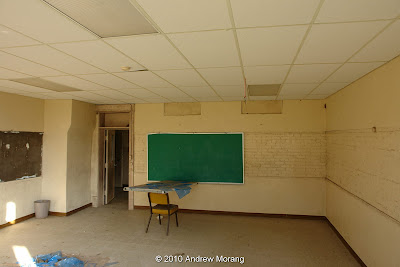 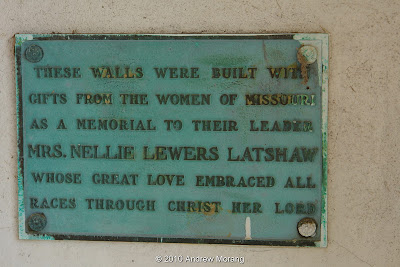 Proceeding south (further away from Hwy 80), you come to the brick 1926-vintage Administration Building. Many of the windows have been broken and partly fixed with wood panels. The few interior rooms I could see were just like early 20th century schoolrooms you can see around the country. A couple of administration-looking offices were sided with nasty cheap dark paneling. As you can see from the plaque, funds for the college came from around the country. 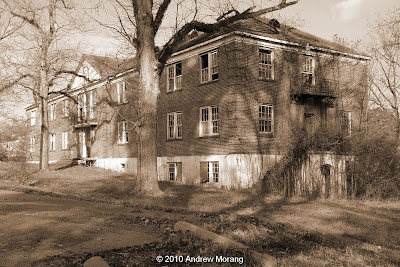 The building furthest south is Belding Hall, the former boys' dormitory (1935-vintage). It looked like it was in the best condition of the historic buildings, but I was unable to see inside.

I don't know what to say. It's a beautiful site. But who could afford to restore the buildings? Most modern conference centers want contemporary energy-efficient climate-controlled buildings.

All photographs taken with a Sony DSC-R1 camera, tripod-mounted. I also used traditional Panatomic-X black and white film in a Fuji 6x9 camera but have not processed the film yet. For the monochrome frames above, I processed the Sony RAW files in Phase One's Capture One 4 software, which does a very nice job in taming high contrast and recovering highlights. I then resized, sharpened, and converted to sepia with ACDSee ProV2.5 software.
Posted by Kodachromeguy at 20:38

The green paint got its color from chromium oxide, which made it hard and durable for clean up, and resistant to breaking down from bodily fluids. It was originally thought to be a calming color as well. In the 70s or so, a color called Baker-Miller pink (after the two officers who allowed the psychiatrist to use it in a facility) was introduced. Baker-Miller pink was found to reduce aggression and increase relaxation in agitated subjects. It was used in prisons as well as mental institutions. I still recall reading the first article called "What is Baker-Miller Pink?" when I worked for mental health institutions in the 70s and 80s.

Resistant to breaking down from bodily fluids??? We can let our imaginations run with this one.....

Does anyone know who Allison Hall was named after?

I tuned pianos in the area 1986-2008 and always used highway 80 instead of the interstate. I passed this school many times and always gazed up at the buildings, wondering what it looked like in the grounds. I'm glad I could finally see.