Dear Readers, bad news: what is left of the famous Mississippi Basin hydraulic model in Jackson (in Butts Park off McRaven Street) has deteriorated noticeably in the last year.

This was the largest hydraulic model in the world, meaning it covered the largest continental land area ever to be assembled into one comprehensive tool to test water flows. It was last used during the 1973 Mississippi River flood when the Old River Control Structure was almost undermined. The structure's failure would have led to a large proportion of the river's flow going down the Atchafalaya River waterway rather then along the present path past Baton Rouge and New Orleans and on to the Balize Delta. The model was maintained through the 1970s but finally discontinued because of the expensive manpower requirements. The land was deeded to the Department of the Interior and subsequently to the City of Jackson in the early 1990s. Since then, trees and brush have covered much of the site, buildings have fallen down, and vandals have damaged equipment and stolen property. 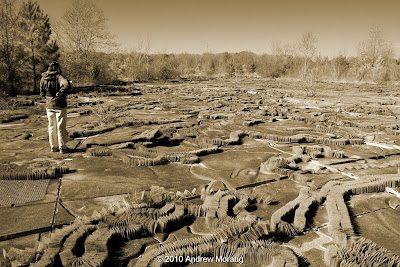 You can get an idea of the vast size of this operation from the photograph above. This is part of the lower Mississippi below Vicksburg. The accordion-folded mesh serves as friction to simulate trees (hardwood bottom land) in the delta plain. This area is not as overgrown as other areas because of the broad expanse of concrete. 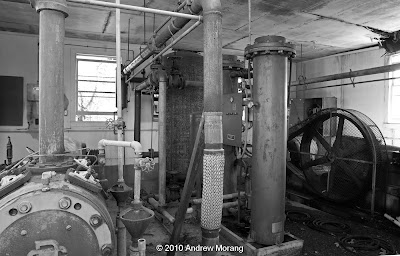 One of the compressor houses still has its roof, and the equipment inside is still present. Another one-story building on the site has completely collapsed. Another one suffered a fire so intense that the steel roof joists warped. 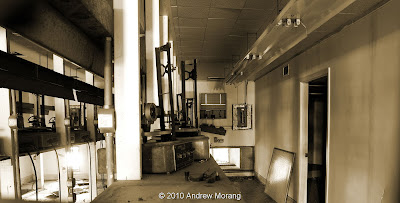 In the lower-river control house, a number of the Stevens chart recorders have been stolen since last January. These machines provided a permanent record of a flood in the form of stage hydrographs. They recorded on chart paper with pens, similar to tide recorders and just about every other type of technical data recorder in the mid-20th century. 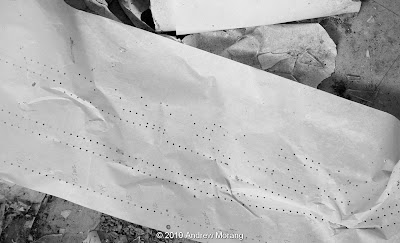 The punched paper you see above was for the flow controller system. This controlled a variety of orifices in the flow controller tank, which in turn released precisely measured amounts of water to the model. The charts could be played back many times to rerun particular flow events or storms. A coworker told me that at one time, many bookcases were filled with these paper rolls. Fascinating technology, but I can imagine the manpower required.

You can see more photographs of the site in this January 2010 blog entry: Basin Model. If you want to see what is left, visit soon. The deterioration appears to be accelerating. It's really sad to let this historic civil engineering wonder go.


UPDATE JULY 2017:  A volunteer organization has been formed to clean and clear the site and develop it as an education/interpretive center. They have already done amazing work at clearing trees and cleaning off some of the concrete walkways. Readers interested in participating in the cleanup work, please contact: