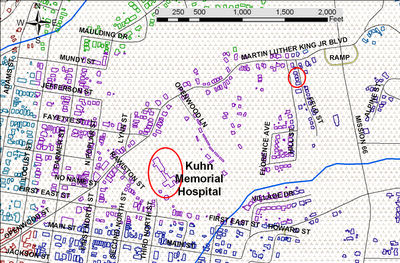 The long-abandoned Kuhn Memorial Hospital, in Vicksburg, Mississippi, has become a popular site for urban archaeology, or at least for decay photography. The spooky old buildings are only a half mile northeast of the Warren County Courthouse on a large lot south of Martin Luther King, Jr., Boulevard, formerly known as Jackson Road. 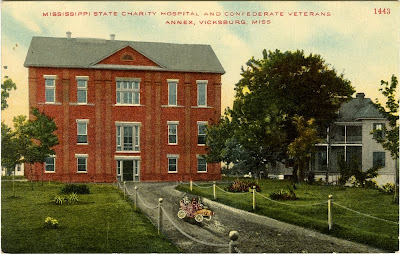 The site was the original location of the Vicksburg City Hospital in the 1830s. The State took over the operation of the facility in 1871 and re-named it the State Charity Hospital at Vicksburg. For an excellent summary of the hospital's history, readers can refer to a 2010 article in Preservation Mississippi. The red brick building ("a substantial house") in the antique postcard (from Mississippi Department of Archives and History) was in use until 1962. A modern annex was built in the rear in 1959 and the institution renamed Kuhn Memorial Hospital. One of the comments written in response to the Preservation Mississippi article noted that the 4th floor was a minimum security prison. Another noted the presence of mental patients.

The building on the right was an annex for Confederate veterans. It burned under mysterious circumstances in 1918. The site is now forested. Today, we forget that for well over a half century following the Civil War, veterans from both sides of the conflict needed medical care and, often, housing and food. Many were crippled or in very poor health. 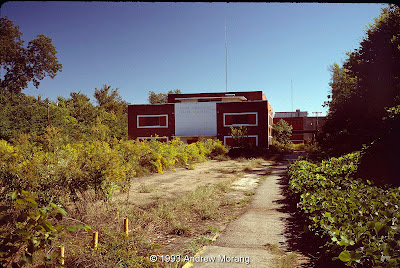 The original brick house was replaced in 1962 with this substantial and rather stern modern building. In 1993, it was still secure and intact. (Kodachrome slide taken with a Leica M3 rangefinder camera and 35 mm f/2 Summicron-RF lens (the 1st generation 8-element version)). 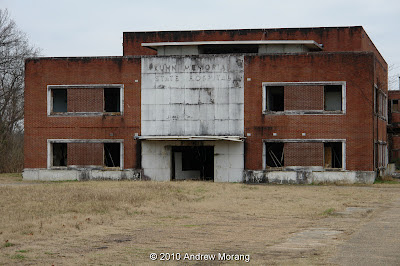 The hospital is still visible from MLK Boulevard, but is now moldering and pretty nasty. 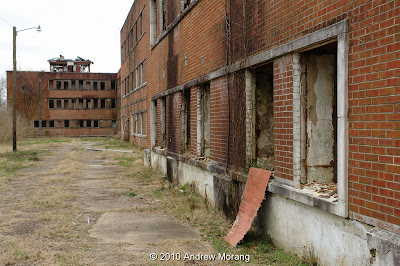 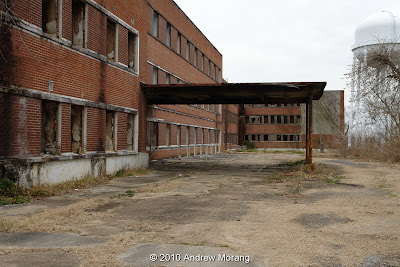 These photographs show the east and west sides of the 1962 building, with the 1959 annex in the back. 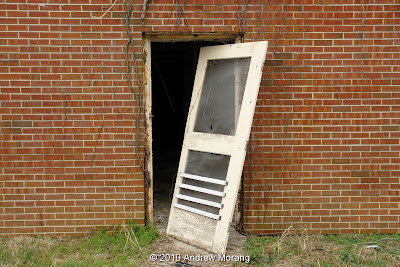 The December 31, 1989 issue of The Vicksburg Post ran an article titled, "Closing of Kuhn Memorial Is Vicksburg's Top 1989 Story." The article summarized the convoluted arguments in the 1989 legislative session regarding funding for Medicaid versus continuing to fund Mississippi's three charity hospitals.

On February 23, 2010, The Vicksburg Post ran an article on the hospital titled, "20 years after." The former business manager remembered how the hospital was a multifunctional facility, with a burn center, occupational therapy, and physical therapy. Kuhn provided free or low-cost health care to residents from all over central Mississippi. Most were Medicare patients after the program began in 1965. The hospital employed a variety of specialists, including doctors from the Philippines, Cuba, and Korea. In addition to medical services, the hospital was also a training facility for nurses and resident doctors.

The hospital closed its doors in 1989, a victim of changing economic priorities and poor economic modeling. Details of the closure can be seen in the Mississippi Code of 1972, as Amended. "(1) From and after July 1, 1989, the Kuhn Memorial State Hospital at Vicksburg, the South Mississippi State Hospital at Laurel, and the Matty Hersee Hospital at Meridian shall be closed, and the Legislature shall not appropriate any funds for the operation of those hospitals after that date." Thus ended the era of state charity hospitals in Mississippi.

In 1994, the State gave the land back to the City of Vicksburg (according to The Vicksburg Post article). In 1996, the City sold the property to Lassiter Associates of Baton Rouge. As of 2012, it belongs to the Ester Stewart Buford Foundation of Yazoo City. For a few years, the buildings were locked and windows secured with plywood. Once vandals removed the plywood, deterioration accelerated. 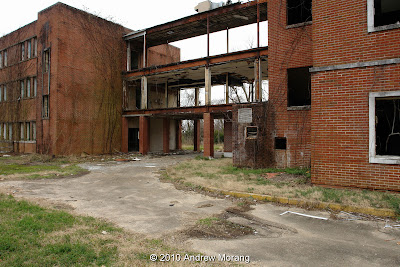 This is the breezeway that connected the 1959 and 1962 buildings. 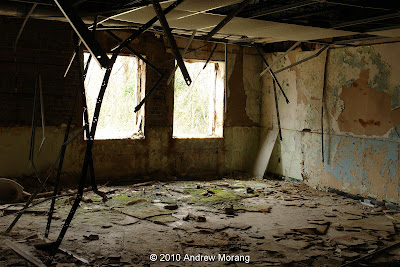 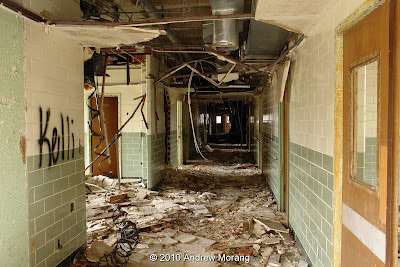 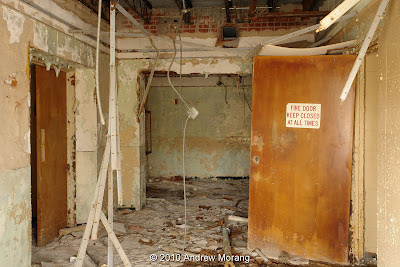 The interior is a mess of decayed and collapsed acoustic ceiling tile, vandalized electrical fittings, and peeling paint. On my own, I hesitate to venture too far into the building because of security. One day, a policeman drove around the property in his cruiser and seemed most surprised to see me with my large tripod. He did not expel me but warned me of debris and hazards (hint, better clear out). 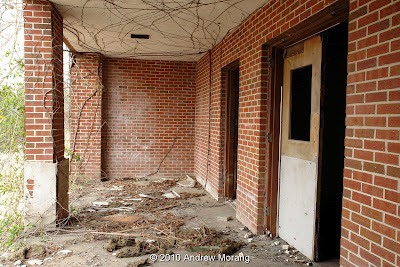 This is a loading dock on the west side of the 1959 building, near the prominent water tower that is visible from a long distance. This is a height of land, possibly selected as the site for the hospital in the 1800s because of breeze and fewer mosquitoes.

(April 2014 note: Please click the link for a 2014 update.)
UPDATE: the entire hospital has been razed. There is no remnant left for photography or exploring. 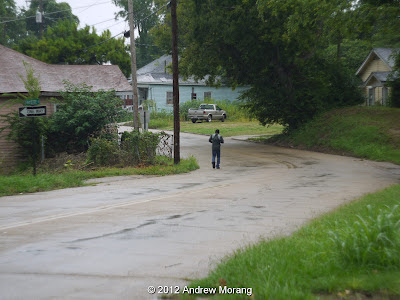 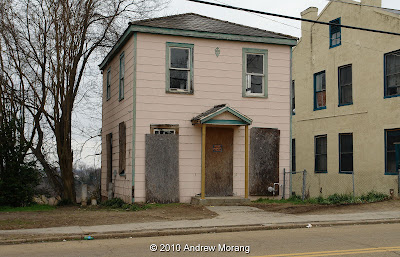 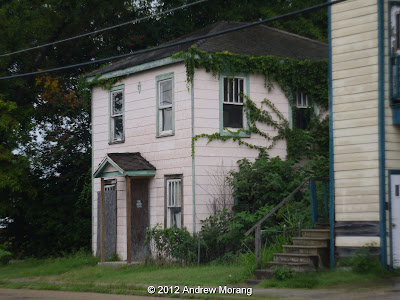 This is one of the older parts of town and Jackson Street (Openwood Road) was the historical route to Jackson. This pink wood-frame house at 1499 MLK Boulevard has been deserted since 2010.  (2014 update: the house has been demolished.) 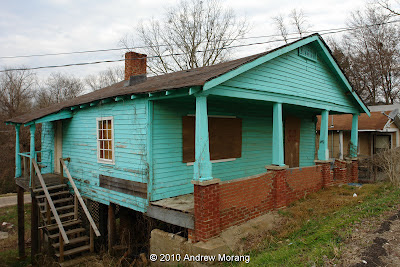 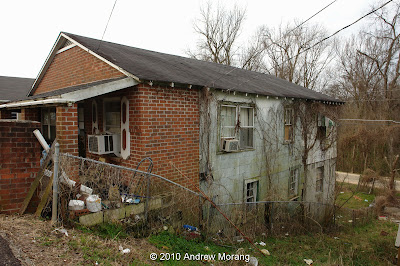 A few blocks to the east is Feld Street, another one of Vicksburg's little-known one-way streets (see Figure 1, the street map). It was built on a ridge crest, and the houses line the road at ground level, with their rear sections supported on pillars. Nos. 512 and 516 were both deserted and on the City condemnation list.

For later articles and photographs of Kuhn Hospital, please use the search function.
Posted by Kodachromeguy at 19:18

I love your blog, Andrew. Me and a couple of friends also ventured into the hospital in 2011. A police officer found us as well. My photos from the interior of Kuhn can be found here for anyone who is seeking more photos of the old hospital: http://martykittrellphotos.blogspot.com/2011/04/kuhn-memorial-hospital.html. Keep up the great work.

Thank you for the kind words!

Thank you for this information.It is really informative and helpful for the people.
Regards:Best Hospital India

Thanks for sharing.. Sadly America has way too many OLD buildings some would call spooky. Especially hospitals and schools. Europe has done a better job of preserving their history. Mississippi's where I grew up. I wish someone would take pictures of the Natchez Traces old places. Thanks.. Ann in Texas

Fantastic articles is post by you in this blog. You give a nice thing. Thank you for such a nice article. Every word og this blog helps me to give detail to me.
Visit: Dentiste Brabant

Is there a Cemetery connected with this hospital?

That is a good question. As far as I know, there is no cemetery. But once the demolition is underway, possibly the workers will find a burial ground.

Is Kuhn the same as what was formerly the Vicksburg Sanitarium? My great grandmother went to the Training School for Nurses there, and we're trying to find some records. Any suggestions on where to go for that? Thanks!