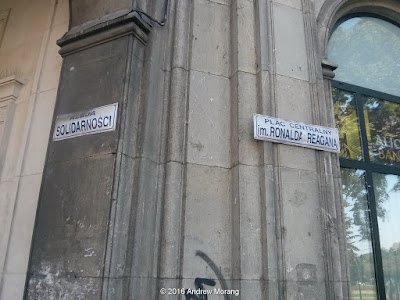 After the Soviets liberated (= conquered) Poland in 1944 and 1945, Stalin imposed rigorous communism on the country. The Soviets knew that the Polish people were deeply Catholic and unlikely to embrace collectivism and forced central planning. Therefore, the new overlords had to get industry operating again, rebuild a war-ravaged country, and demonstrate to the people that communism could make their lives better.

One example of this central planning was the construction of the immense Huta Im. W. I. Lenina steelworks east of Krakow. But to house thousands of workers, a new town was needed. As written in the Nowa Huta District Guide, "Nowa Huta - once an autonomous town, presently a Krakow neighborhood - arose in the 1950s, and represents the fullest, most interesting realization of the socialist realism architectural ethos. The unique urban layout of Nowa Huta - surprisingly monumental and symmetrical - has been given the status of Krakow's historical monuments."

"Its wide streets and well-furnished houses were foreseen as the birthplace of a new socialist society planned by the Communist Party leaders." Today, the wide streets, mature trees, and neat apartments give the community a gracious and well-ordered look. Compared to the rows of nasty high-rise people's housing I have seen in Moscow, Bogota, south Chicago, and Rockaway Beach, Nowa Huta looks pretty good.

The central square where the main roads converge is now known as Plac Centralny im. Ronalda Reagana. Never in their wildest capitalist nightmares could the original designers have dreamed that a main boulevard of their planned socialist reality community would be renamed aleja Solidarności, after a political movement that eventually freed Poland from communism. And even more amazing, the main plaza was renamed after the American president who contributed greatly to the downfall of the Soviet Union and its corrupt puppet states in Eastern Europe. 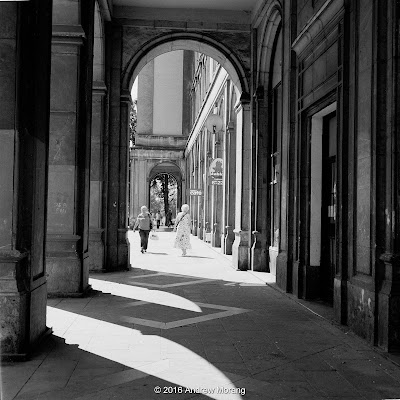 My wife and I only had a few hours to walk around during a walking tour of Nowa Huta, but we were surprised at the high quality of construction in the older neighborhoods. The photograph above is in the Centrum C area. The arches and wide sidewalks have almost a Parisian flavor. Our guide told us that part of this design was for military purposes: in case the locals revolted, soldiers would have straight firing lines (just as Washington, D.C, with its wide boulevards). As stated in the Nowa Huta District Guide, "In the Stalinist era, Nowa Huta was constructed as a kind of fortified camp prepared for potential wartime activity. Its different areas resemble medieval strongholds equipped with an intricate system of passages and security devices. For those who do not know the quarter, the area is an incomprehensible labyrinth, in which even the entrances to the different settlements are hidden behind wall curvatures, being invisible from the sides." 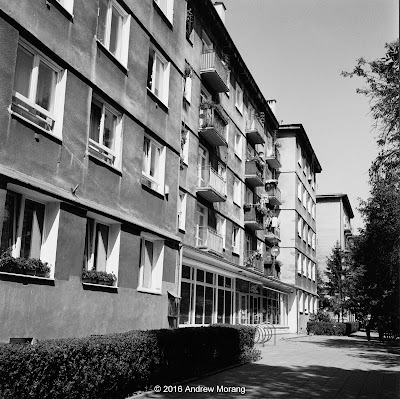 The earliest houses, starting in 1949, were built by teams of young laborers who lived in temporary camps. They had contests on who could lay the most bricks and demonstrate true communist fervor in building a new world. Considering the carnage and devastation of the Second World War, there probably was genuine fervor in rebuilding the nation. I am not sure if the workers were forced labor, but I suspect they could not quit if they did not like the work conditions. But they were fed and received medical care, so conditions may have been similar to work camps of our Civilian Conservation Corps in the 1930s. Consider that for many of the first inhabitants of these housing estates in the 1950s, this was the first time they experienced indoor plumbing, central heat, and, possibly, dependable electricity. Before the war, Poland was largely rural and very poor, and the war destroyed thousands of towns and villages. 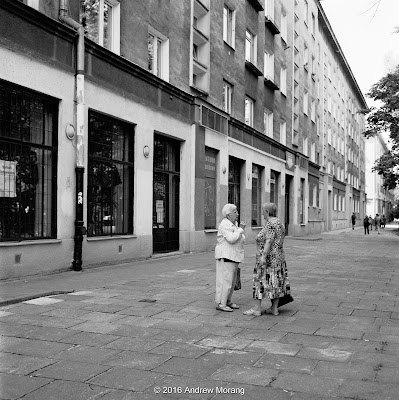 We saw many older folks who have probably lived in Nowa Huta for decades. They had access to clinics, dentists, child care centers, cinemas, concert halls, and other amenities. They also could eat inexpensive meals at bar mleczny, or milk bars. These were state-subsidized and served dairy and egg, cereal, and flour-based meals such as pierogi. We stepped into one, still in business. Many closed after the fall of the communist government, but recently they have made a comeback, in response to welfare state nostalgia and the fact that they provide decent quality food and customer service at low prices. 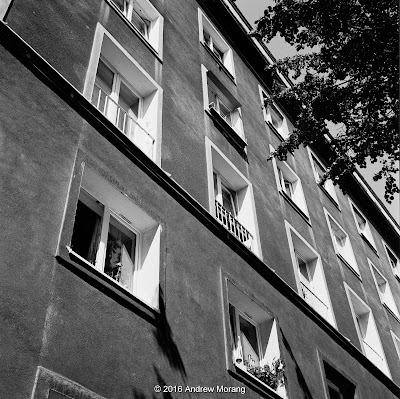 The buildings are severe, but moderated by the tall trees and grassy plazas. Windows have been replaced with modern energy-efficient units. Our guide told us that apartments were allocated to residents based on family size (and political connections?). I don't recall if residents bought their units or how ownership is now titled or deeded. 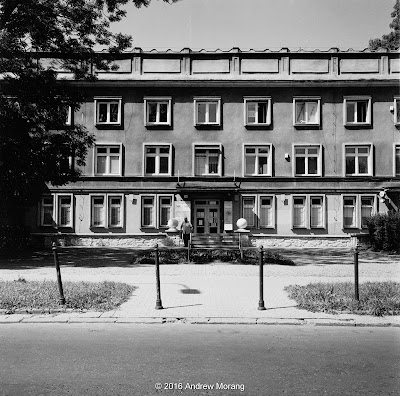 Thousands of residents still live in Nowa Huta, including many young people who never knew it under communism. Our guide told us about how there was an informal information network to inform residents when shipments of food, furniture, clothing, or other goods were due to arrive at the official shops. The residents would be ready to line up at any time of the day or night for these rare commodities. We saw lines like this in the Soviet Union during a 1978 visit. 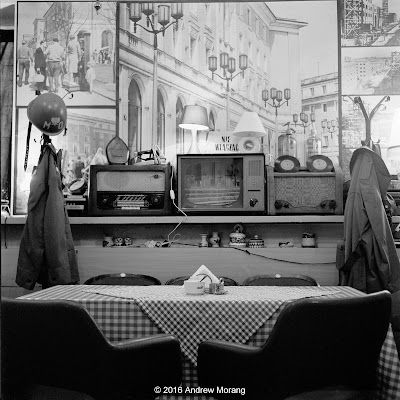 We also had snacks and coffee in a cultural center, sort of a 1960s-themed restaurant/club. This may have been the Janusz Korezak Youth Kultury Center. Nostalgia for some aspects of the good old communist days may be on the rise, but I suspect few Poles really would want to return to that grim lifestyle and political system. Regardless, Nowa Huta is an interesting example of a planned community, and it has weathered the changing times well. I highly recommend a visit. Poland is a fantastic destination, and the people are really nice.

I took these photographs with a Rolleiflex 3.5E twin-lens camera with 75mm ƒ/3.5 Xenotar lens on Kodak Tri-X 400 film. Film looks right for historical topics like this.
Posted by Kodachromeguy at 09:00