In the late 1930s, Nazi Germany was in the ascendency. It was recovering from the devastating inflation of the Weimar era and from the Great Depression, was rebuilding its industry and finances, was flexing its military power, and wanted to demonstrate to the world that it was a technological leader. What better way than to build the world's most modern and sophisticated airport? The leaders of the Third Reich conceived their new airport to be an architectural testament to German supremacy and superiority.

In addition to demonstrating the wealth and technological superiority of the Reich, the new airport was to become one of the cornerstones of a new Berlin, to be renamed Germania. The plan was for thousands of grungy old plebeian apartments and commercial buildings to be razed and replaced with monumental architecture. In the late-1930s, wholesale building demolition began, and some construction started, including the new airport. But by 1940, the war intervened, money and manpower were siphoned away to the war effort, and Germania never came to fruition.

The broad open site where Tempenhof is located had been used for aviation since the beginning of the 20th century. Orville and Wilbur Wright demonstrated their mechanized flying machine on the Tempelhof fair ground in 1909. The Flughafen Berlin Brandenburg web page has a Tempelhof timeline. A modest terminal building was built in 1927, and this older building continued to serve as the commercial airport through World War II. Amazingly, Lufthansa continued to fly passengers out of Berlin until April 1945, just days before the end of the war.
The monumental new terminal was built between 1936 and 1941, designed by a Prof. Ernst Sagebiel, who was closely associated with the Luftwaffe. Initially, it appears as if money was no object, because not only was the scale of the building monumental, but the very finest marble and limestone were used in the decoration. The building was never completed. After the invasion of the Soviet Union in 1941, all work on Germania ended. And although mostly functional, the new monumental building was never used by the Nazi government as a passenger terminal. Instead, it was converted into an aircraft factory. Fighter planes were built or repaired in the main entry hall and underground tunnels, pushed out onto the tarmac, and flown off into combat.

During the war, the Tempelhof suffered very little bomb damage. Our guide said the likely reason is the Allies knew they would need an airfield after victory, so they made sure to not bomb the site. Initially in 1945, the Soviets occupied Tempenhof. An explosion of mysterious origin destroyed the roof of the main entrance hall. Therefore, the roof you see in the first photograph is post-war and about 3 m lower than the original. 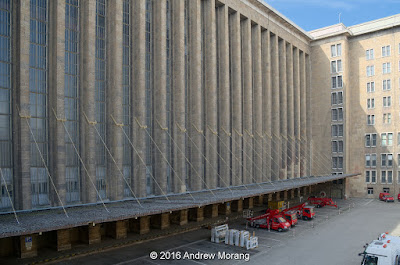 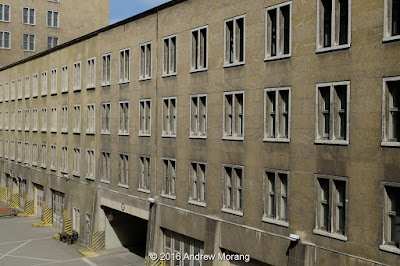 The office and administration buildings were built in the severe style popular in Nazi architecture. They were massive and purposeful, intended to portray power and permanence. Notice in the second photograph, part of the facade is clean. Our tour guide told us that a portion of the film, The Hunger Games: Mockingjay — Part 2, was filmed here. The film crew cleaned part of the facade to make it look fresh, but neglected to clean the rest of the wall. 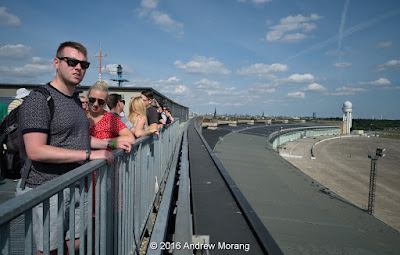 My photographs really don't convey the scale of this building, which was 1.2 km long. At the time of construction, it may have been the largest building on earth. The long curved roof that you see in the right side of the photograph was not only a cover over the aircraft loading and unloaded area, but was also intended to serve as bleachers where over 100,000 loyal citizens of the Reich could watch parades and political assemblies. Stairs were built in towers to funnel these thousands up to the roof. 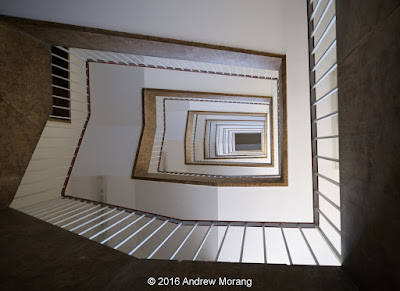 This is one of the stairs that would be used by the people heading for the roof. It is a double spiral stair, where one side is for uphill traffic and the other for downhill. 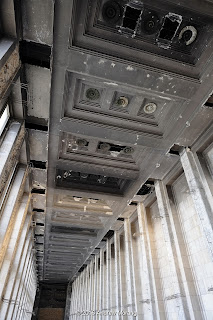 After descending from the roof, our guide led us into a long hallway that had not been completed. The ceiling, still blackened from the 1945 fires, shows the original design. This roof is 3 m higher than the post-war roof in the main entrance hall. 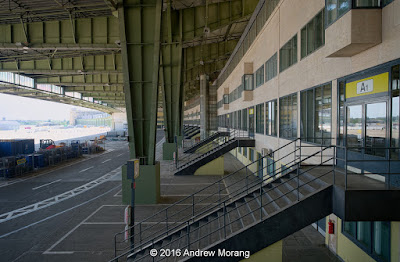 This is the view of the tarmac under the cantilevered roof. In the 1930s, when planes were smaller, a plane could pull in under this huge roof and passengers would be protected from the weather. Part of the roofed area was enclosed to serve as hangars. 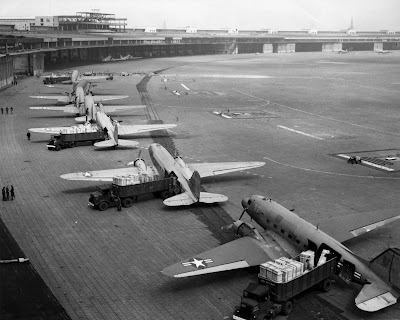 Tempelhof played a critical role in the famous Berlin Airlift of 1948-1949. The Soviet Union had closed all ground-level access to Berlin, and the United States and United Kingdom supplied West Berlin with food and fuel by aircraft. At its peak, one plane landed every 3 minutes, was unloaded, and flew away. Supporting the German population in West Berlin at incredible cost and not abandoning the city to the Soviet Union was a major propaganda coup and did much to make the German people look upon the Allies favorably. As stated on the web site of the State Department Office of the Historian, "It also transformed Berlin, once equated with Prussian militarism and Nazism, into a symbol of democracy and freedom in the fight against Communism." 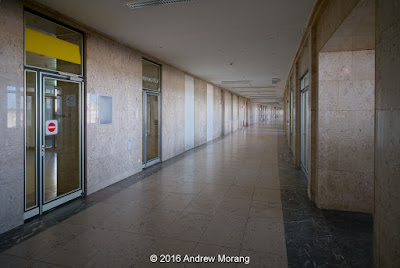 The terminal was in use until 1988. One of the main problems was the runways were too short for many modern aircraft. Because the site was surrounded by city, there was no practical way to extend the runways. 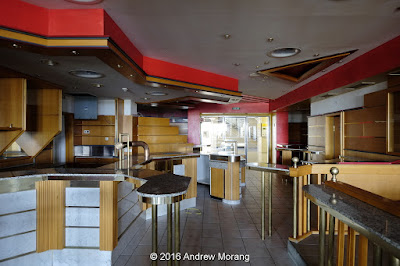 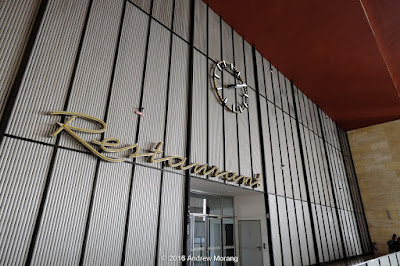 Much of the interior decoration looks like it came from the post-war modernism 1960s. It is quite appealing when done well. 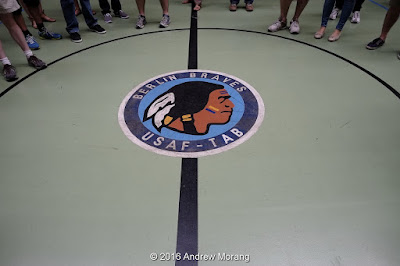 For many decades, the US Air Force occupied part of the complex. Air Force personnel lived in the city, but recreation facilities were on the upper floors. Our guide told us that occasionally a former airman stationed at Templehof came on the tour and remembered his posting here with fondness. 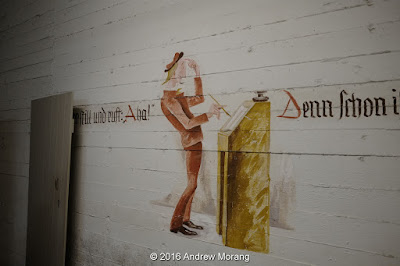 In the deepest parts of the basements, bomb shelters were set up for civilians during World War II. To make children feel less uncomfortable, quotes and figures from German folklore were painted on the walls. 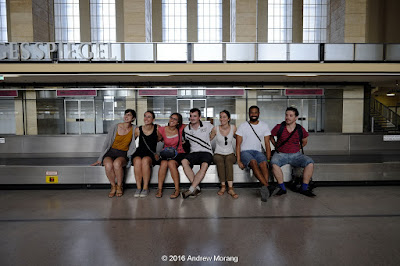 Today the huge complex is largely unused. Tourists take the guided walking tours and pose in the main entrance hall. The Berlin police rents part of one office building. The organization that runs Templehof is trying to attract new tenants. Rock concerts and trade shows were held in some of the hangars.

But the concerts are on hold. An organization that helps refugees has rented (or used) sections of the former hangars to house hundreds of Middle Eastern refugees from. They put up temporary walls and bunk beds; I am not sure about food services or sanitation. A New York Times article describes this new phase of the airport's evolving history.

Berlin has been building a new Berlin Brandenburg Airport adjacent to the existing Schönefeld Airport. The new Brandenburg has cost €5.4 billion, is delayed, and has been plagued by cost overruns, significant technical issues, construction flaws, bankruptcies, and corruption. Our guide said the new terminal may need to be torn down and totally replaced at a cost of more than €10 billion! Pity they can't reuse Tempelhof. 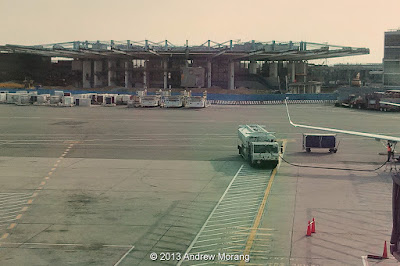 The architectural design of a wide cantilevered roof extending out over the parked airplanes was copied by the architects of the Pan American Airlines Worldport at Idlewild (later Kennedy) Airport in New York. It was a striking design for the modern jet era, and from the air, the building looked like a flying saucer. Note that PanAm was also a major user of Templehof for 4 decades. After PanAm went bankrupt in 1991, Delta took over the Worldport. Passing through several times in the early 2000s, I recall that the building looked tired and grungy. A 2013 Vanity Fair article outlines how the The National Trust for Historic Preservation and other preservationists tried to save the Worldport, but the Port Authority of New York and New Jersey was uninterested. The photograph above is from 2013, when I was lucky enough to land at Kennedy while demolition was underway. (I also flew out of Idlewild in 1962, but I was too young to care about architecture.)

Photographs at Tempelhof taken with a Fuji X-E1 digital camera with 14mm and 18-55mm Fuji lenses.
Posted by Kodachromeguy at 18:42