Near the Top of Asia, the Kingdom of Lo (Part 5; Lo Manthang)

Lo Manthang is the largest town in remote north central Nepal, near the border with Tibet. According to Wikipedia,

Lo Manthang was the walled capital of the Kingdom of Lo from its founding in 1380 by Ame Pal who oversaw construction of the city wall and many of the still-standing structures. After the Shahs of Gorkha forged Nepal out of numerous petty kingdoms in the 18th century, Lo became a dependency but kept its hereditary rulers. This arrangement continued as long as Nepal remained a kingdom, until the country was declared a republic in 2008 and Jigme Dorje Palbar Bista (c.1933–2016) was stripped of his title. His protector King Gyanendra suffered the same fate, however the raja or gyelpo of Mustang was 25th in a direct line of rulers dating back to 1380 AD.

Crossette (1996) provides some of the cultural and mid-20th century background to Lo:

Until the unification of Nepal by Gorkha kings in the eighteenth century, most Tibetan borderlands were not really a part of the country. Psychologically, many pockets still are not. The kingdom of Mustang, nearly 150 rugged miles from Kathmandu in a protuberance thrusting into Tibet, was one of them until Nepal opened the territory to develop­ment and  trekking.  In upper Mustang, the Buddhist kingdom of Lo, with its walled capital, Lo Manthang, broke free of Tibet in the fourteenth century, reached its height about a hundred years later on the strength and income of trade with Tibet, and enjoyed an independent existence for nearly four hundred years. During that time temples and a few palaces were built in what was called Mustang Bhot - Tibetan Mus­tang. "Bhot," ''Bhotia," "Bhutia,'' and other variations of the word often mean Tibetan to South Asians in the same way "Hellenistic" meant not quite Greek but within the influence of the Greek world. The word, probably a variation of ''Bot," originally meant Tibet in the Tibetan language.

Although the kings of Mustang had lost all their residual powers and the formal use of titles in the 1950s, Mustang was a wild card as late as the 1960s, when Nepal was unable to do much to stop a Tibetan exile guerilla force based there with what is widely assumed to be substantial help from the United States Central Intelligence Agency. The guerrillas, known in Nepal as Khampas because most were from the Kham region of eastern Tibet, obviously never stood much of a chance against the Chinese army in Lhasa, but they could serve as an annoyance to Beijing. Tibetan exiles in the Indian hill town of Darjeeling told me, with linger­ing bitterness, that American enthusiasm for their cause ended as sud­denly as it had begun when President Richard M. Nixon recognized the Chinese Communist regime. Some Tibetans went on fighting until the mid-1970s, when Nepal sent soldiers to wipe out the bases of the rebel­lion. About the same time, the royal government of King Mahendra introduced some development to Mustang, which had lost its Tibetan trade. 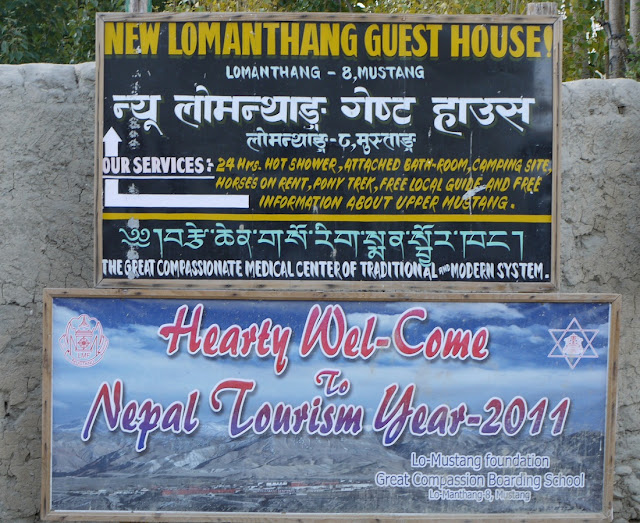 After walking for days northward through Mustang, Lo-Manthang seemed like the big city. We saw jeeps and motor bikes, some street lighting, stores, cows, horses, and guest houses. We even saw some satellite dishes, and the guest houses had wi-fi. Note the traditional wood sticks placed along the roof parapets.
The motorbikes have an interesting trade connection. As of 2011, the road south through the valley of the Kali Gandaki towards Jomson was not complete. We saw workers constructing sections of the road and learned that during the following winter, rock slides and avalanches destroyed some of their work. However, the Chinese had built a road north from Lo-Manthang to the border with Tibet. Therefore, most of the goods we saw in the small shops, such as packaged foods, cosmetics, candies, and propane bottles, came from China. We learned that several times during the year, Chinese traders held a fair at the border to which Nepalese buyers could visit without visas. That is where the Nepalese bought inexpensive motorbikes, petrol, spare parts, and who knows what else.
But change was ongoing already. As early as the early-1990s, Crosette (1996) describes the trip taken by a Nepali writer, Manjushree Thapa (1992), to Mustang:

She described the king's palace in Lo Manthang, with linoleum on the floors and men who drank themselves into nightly stupors while rolling dice. But she also wrote of the piety and devotion of people who had maintained their Buddhist temples and monasteries undisturbed by poli­tics over centuries. She sat down for tea with monks eating Chinese candy brought back from Tibet, where temples are once again open to them. One of their lamas made regular trips to Tibetan gompas, they said, where he was much in demand to say prayers, In return he brought back butter for the butter lamps of impoverished Lo Manthang. It was an interesting trade-off: the wisdom and piety of an unbroken Tibetan Buddhist tradition for the biscuits, sweets, and butter of soldier-rich, monk-poor Tibet. Tibetan gompas aren't alone in looking toward Lo for a rare cultural purity, Thapa wrote. With the barriers to outsiders coming down, Mustang, like Bhutan, will draw a special breed of tour­ist. "Because it promises a Tibetan culture more pristine than in Chi­nese-occupied Tibet, Lo is the darling of discoverers, adventurers and Tibetophiles," she said. But the outside world is alien, no matter what its motive for coming to Mustang. And outside influences were already making a mark before tourism began, as more people from this hidden kingdom traveled beyond its mountain walls. 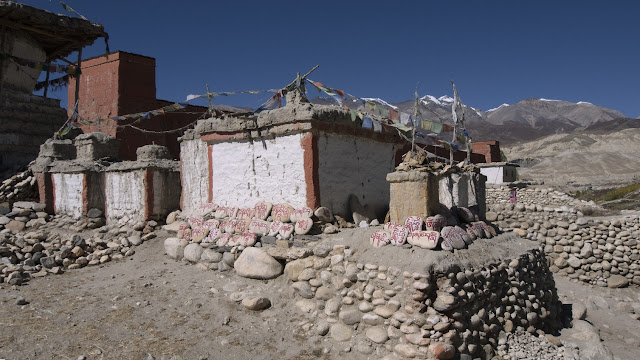 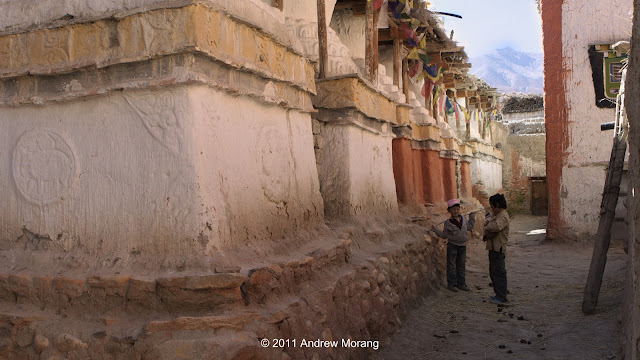 Being a former royal capital, Lo_Manthang was full of ancient chortens. 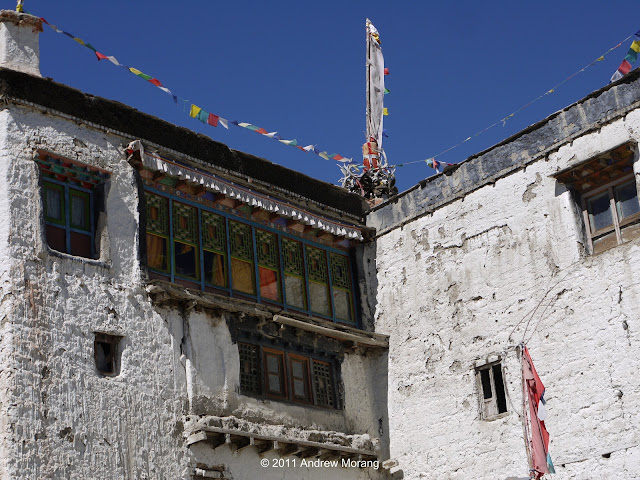 The raja's Royal Palace is a complicated, five-story structure built around 1400. Imagine the passageways and semi-forgotten chambers. There was probably a cistern to save rainwater. Does it have indoor plumbing now? Several large Tibetan mastiffs sat on an open porch and growled at everyone and everything.

Jigme Dorje Palbar Bista (Nepali:जिग्मे दोर्जे पलवर विष्ट) (1930-2016) was the unofficial King of Mustang (Mustang Rājā) between 1964 and 2008, when Nepal abolished the Monarchy. The King continued to live in the Palace, and local residents throughout Mustang continued to respect him and his opinions on cultural and administrative matters. We learned that he lived in the palace for the summer but spent winters in Kathmandu and Los Angeles. The raja died in Kathmandu at age of 86. His only son died at age 8, and the current heir to the throne lives in California, married to a Bhutanese princess. 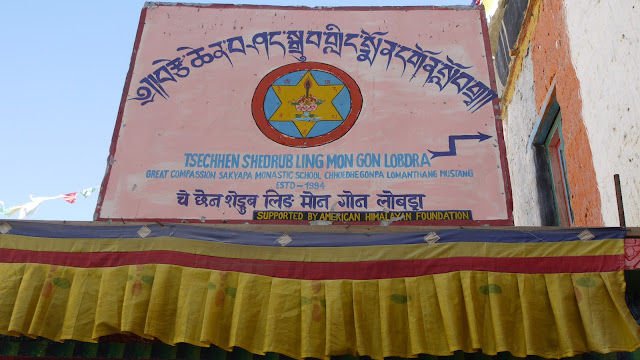 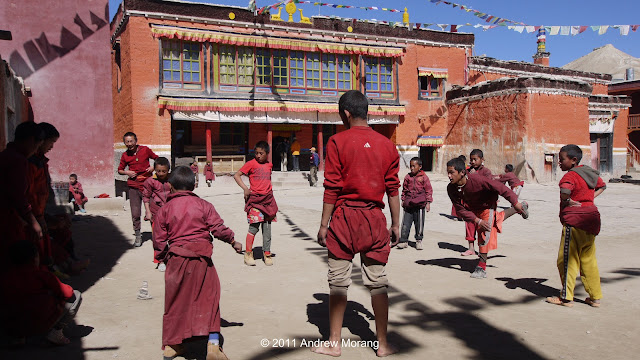 The school (read the sign for the full name) is supported by the American Himalayan Foundation. It is is a modern building and has electricity.

I cannot remember how many nights we stayed in Lo_Manthang, either 3 or 4, making this a fascinating  cultural experience. GO before this remote part of the world changes forever!

These are all digital files from a Panasonic G-1 digital camera. I may have posted too many pictures, but this is a fascinating site off the normal tourist route.