Near the Top of Asia, the Kingdom of Lo (Part 7, Heading South)

Dear readers, we have walked to the remote capital of Lo Manthang in Nepal's Kingdom of Lo and ridden horses to the monastery of Nyiphu near the Tibetan border. But autumn was approaching, and it was time to head south and, eventually, home.

Leaving Lo Manthang, we walked south through a rather desolate and bleak landscape. Imagine the winter here at 3,800 m elevation. For our trek south, we followed the eastern route which approximately follows the Kali Gandhi River. We crossed a couple of passes exceeding 3,900 m elevation, but it was not hard walking, and we had been at that altitude for over a week.

Charang (or Tsarang), at 3550 m is the first town south of Lo Manthang. We stayed in the Kailash Hotel, a rustic but clean place. Note from the photographs above that we still had magnificent weather, with nights just a bit below freezing. It was October 14, so winter would be here soon.

A ruined palace, once the home of the Raja of Mustang, strategically overlooks the town. 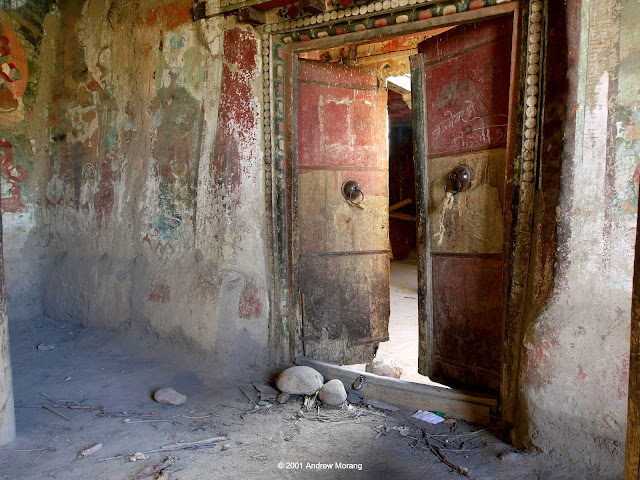 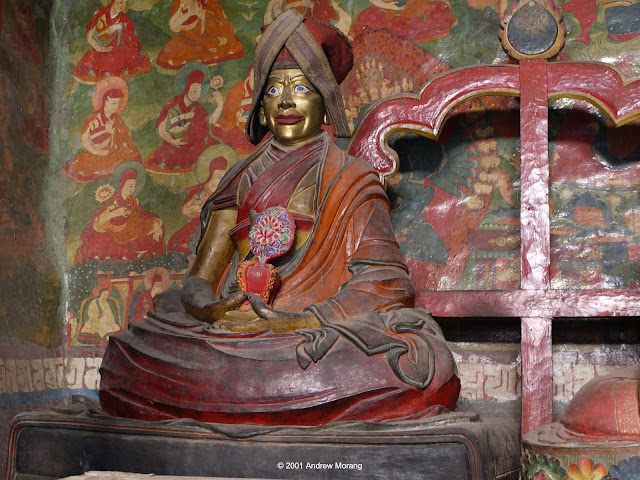 The Dhargyeling Monastery in Charang, possibly over 500 years old, is a treasury of statuary, painting, and sacred scrolls. How do these pigments survive the brutal cycling from cold to hot? 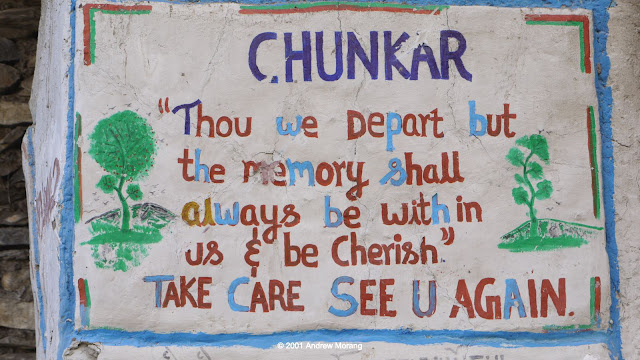 In another day, we reached the village of Ghami, where we had stayed a week before. From here on heading south, we retraced our steps along the Kali Gandhi River.

Our next night was in Syanboche (also Syangbochen? approx. 3,800 m), really little more than a dirt street between some houses.

Samar was a rather well developed town, just a short distance above Chele and the crossing of the Kali Gandaki. North of town, the road passed through some treacherous terrain of landslides and rotten rock. We saw road crews trying to cut the road across some cliff-faces. We learned later that in the following winter, parts of the road were swept away in landslides. Our horses were more sure-footed than we were.
The next day, we walked across the river and stayed again in the big town of Kagbeni, which I described in Pat 2 of this series (click the link).
Oh, oh, traffic, electricity, stores, lights - after another day's walk south from Kagbeni, we reached Jomson, the main commercial town of southern Mustang. Jomson has many hotels as well stores, a health center, and an airport. This was a major stop on the Annapurna circuit, so it has received tourist traffic for decades.

Jomson was the last stop for most of our group. They returned to Kathmandu by air. Within about a week, brutal cold descended into Central Asia, and many Mustang villagers had to head south abruptly.

I opted to continue south on foot and walk down the fantastic valley of the Kali Gandaki. The river cuts the deepest canyon in the world between the 8,000-m peaks of Dhaulagiri and Annapurna. This amazing 4-day walk carries your through several biologic zones as the elevation drops and the temperature goes up. You are in high altitude desert at Jomson and semi-tropical rainforest at Tatopani. I wrote about this canyon walk in 2017. Highly recommended!

This ends one of my best hiking trips ever. I hope you enjoyed riding (walking) along.