Near the Top of Asia, the Kingdom of Lo (Part 6, Nyiphu Monastery)

North of Lo-Manthang, the terrain looks dry, wild, and forbidding. But humans have inhabited this area for at least 2500 years, indicating there was sufficient water for agriculture and animal husbandry. The cliffs around the valley are riddled with caves, some of which were used for human occupation hundreds of years ago. Many were tombs and contain religious relics dating back to the origins of Tibetan Buddhism. 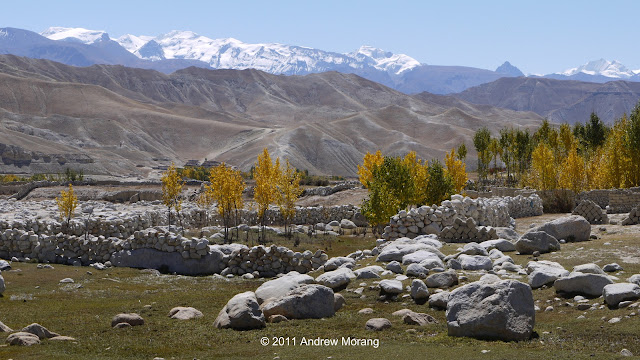 Chhoser is a small town in the valley north of Lo-Manthang. I think this is where we bought tickets to visit the monastery. In the photograph above, note the rock walls made of rounded river rock. I assume this is one way that the villagers cleared the land to make it suitable for some agriculture (barley?) or grazing. You see similar rock walls in New England, where settlers in the 1600s and 1700s cleared rocks from the land and used walls as a disposal method. 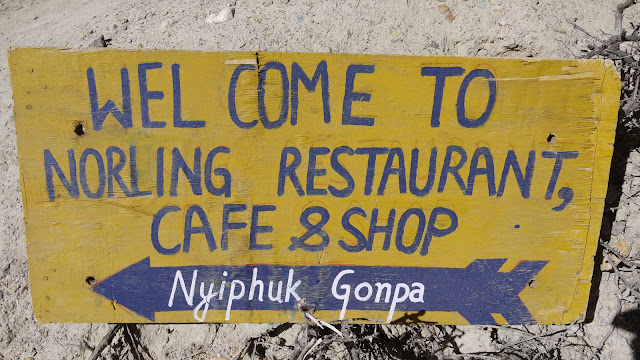 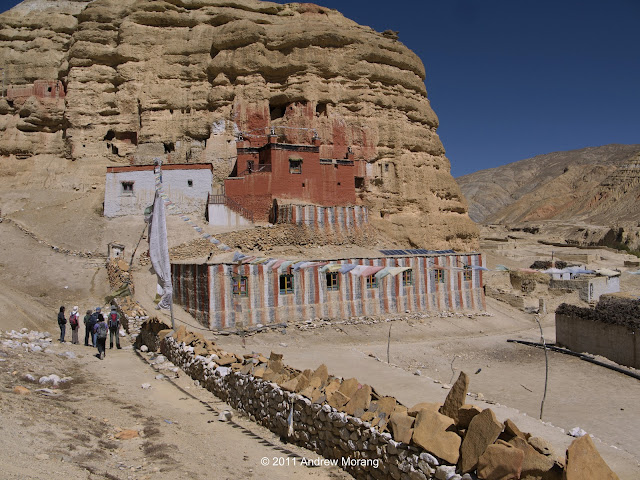 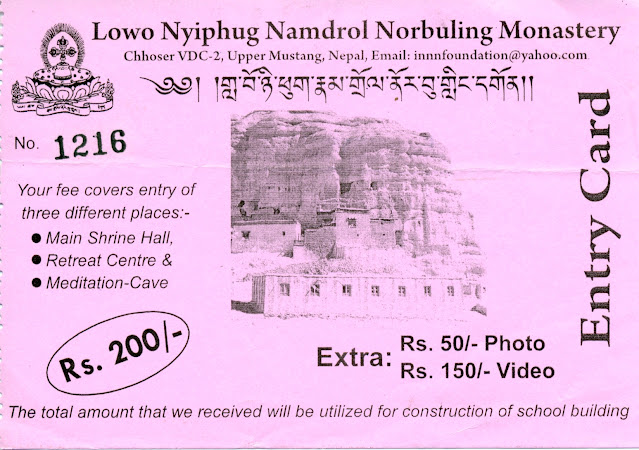 The  Nyiphug Namdrol Norbuling Monastery is north of the town of Chhoser and is partly built into the mountain. We rented horses for the 8 km. trip north out of Lo-Manthang. Our Sherpa guides walked, but we wimpy lowlanders opted for the bumpy luxury transportation.

The rooms built into the rock are decorated like many gompas, with colorful fabrics, a sitting Buddha, candles, some electric lights, and a variety of offerings donated by pilgrims. Fascinating. 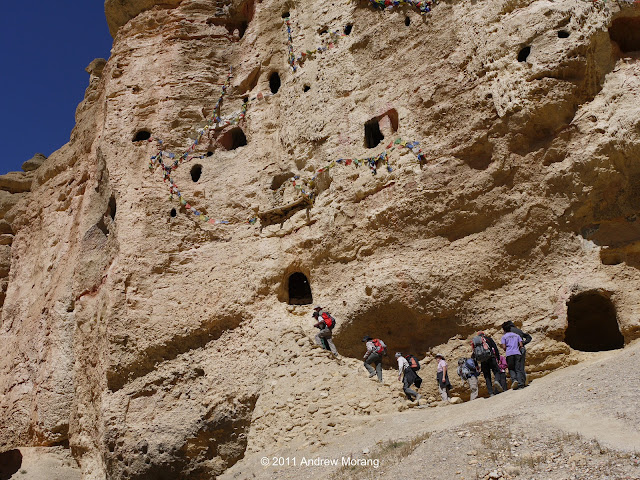 Monks occupied some of these caves in solitary meditation, sometimes spending months or years alone. Other caves shielded families in the past during warfare. I am not sure how they handled water supply. Some caves contained tombs dating back thousands of years. A 2017 Public Broadcast System (PBS) NOVA program described an expedition to investigate Secrets of the Sky Tombs. We were able to climb up to some of the caves, which have passageways and platforms that are semi-safe for tourists.
This is a very special place. And the remoteness and culture will be profoundly changed when the road is complete down the Kali Gandaki. Already, the road to China means Chinese trade goods come in from the north. What happens when mass market tourism comes via bus? As David Ways wrote in 2019:

For trekkers the dreaded road from Pokhara to Lo Manthang to Tibet is not yet as bad as some people make out (it only exists in small sections and is completely off-road). However, once it is finished and the trading route to China is fully open there’s little doubt the Kingdom of Lo will disappear into folklore and package tours much like the Annapurna Circuit of 10 years ago.

As of 2011, Lo was still a magical place, a time capsule of tradition and a way of life little changed over the decades. I am glad I visited this remote part of the world. When the COVID crisis is finally under control, consider a trip to the Kingdom of Lo.
These are digital images from a Panasonic G1 digital camera. This was Panasonic's first micro four thirds (µ4/3) camera and was very refined for a version 1 product.
Posted by Kodachromeguy at 08:00