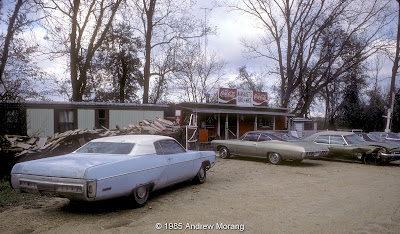 Margaret's Grocery at 4535 North Washington Street is an amazing piece of folk art crafted by the Reverend H.D."Preacher" Dennis. Many people have photographed the site, including the talented local photographer Marty Kittrell (see his blog), but I would like to add some photographs from my 1980s and 1990s archives. This first photograph is from December 1985, soon after H.D. married Margaret Rogers. At that time, it really was a local grocery store catering to nearby residents from the Kings neighborhood. There were just a few of the hand-crafted decorations that later transformed the humble shop. 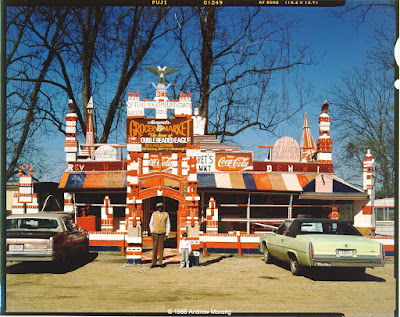 By 1988, look at the brickwork! Reverend Dennis is the tall gent framed by the brick arch. He was proud of his work, and as many locals know, once he started talking about his love for the Lord and his temple, he went on, and on, and on... He told me that at the end of World War II, he worked as a prison guard for German prisoners and learned his brick skills from them. He said they were the best craftsmen anywhere. Germans had an affinity for Rev. Dennis because many German tourists visited, as proven by testimonials in German in the guest book. The photograph above is a scan of a 4×5-inch Fujichrome transparency. 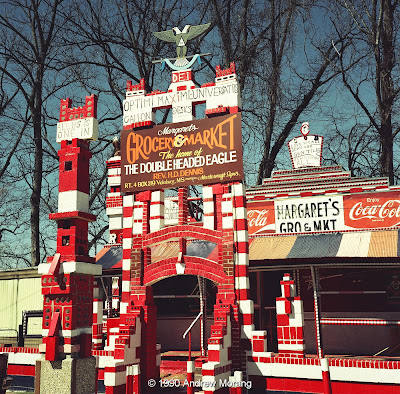 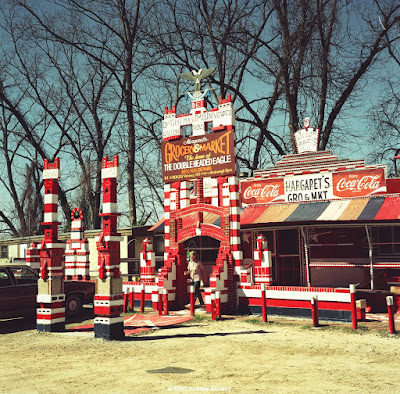 You can see how brilliant the colors were when fresh. It was a difficult site to photograph because you needed to be there in the morning when the sun shone on the front. (The two frames above are from Fuji Reala film exposed with a Rolleiflex camera.) 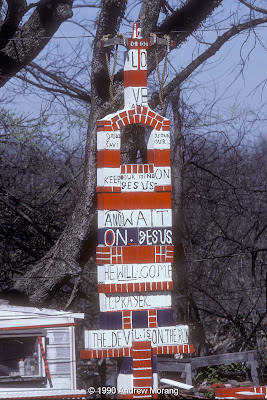 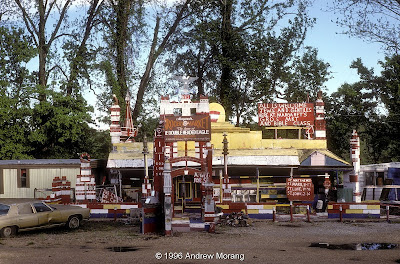 Here is an April 1996 photograph, with a yellow motif along the roof line. The Coca Cola signs along the awning have been painted over. 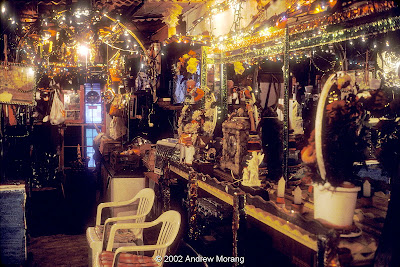 Along with the exterior, Rev. Dennis was working on the inside. He eventually covered almost the entire ceiling and most of the walls with flowers, clocks, paintings, crosses, and things I can't name. This was a badly underexposed Kodachrome slide from 2002 that took some effort to scan and bring out details from the darkest areas. 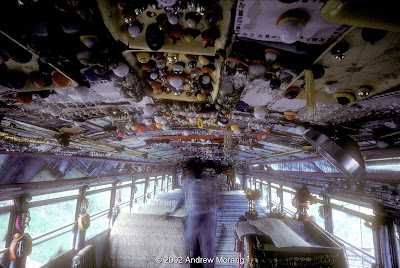 I am not sure when the famous bus appeared on the property, but it was there in 2002, already decorated. This was another difficult Kodachrome to scan because the windows were overexposed while the ceiling was dark. Nowadays, digital imaging handles the exposure range much more gracefully.

Margaret passed away in 2010 and the Rev. Dennis had to move to a nursing home. Since then, vandals have stolen art and architectural features, and rain and weathering are taking their toll. In a later blog I will show readers what the Gro looks like today. The Vicksburg Post has featured Margaret's Grocery several times over the years, with the most recent article on 15 August, 2010. 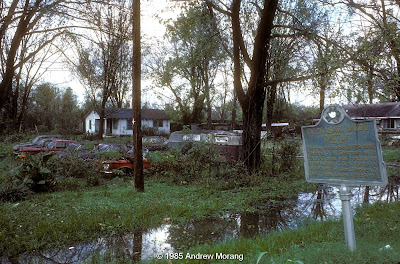 Back in the 1980s, North Washington Street had a number of odd places to see. Here is a former Corvair junk yard. I wonder where they all went? People restore Corvairs now.
Posted by Kodachromeguy at 21:16

Thanks for sharing these pictures of the development of Margaret's Grocery--I've never seen pictures that show that! It must have been different every time you drove past. And the colors so vivid!

Those first two 1990 photographs are simply incredible, with amazingly vivid colors. The red in the second 1990 photograph, the entrance gate, possesses a red every bit as vibrant as a William Eggleston or William Christenberry photograph, two of my favorite photographers, and two of the greatest photographers who have ever lived. It is a shame that Kodachrome no longer exists as a photographic medium, although at least the larger film formats will always continue to exist.

Thank you for sharing