Drive on Levee Street in Vicksburg south of the waterfront and the casino, and you soon reach the Kansas City Southern railroad yard. This is a historic railroad yard and has been in continuous use since before the Civil War. There is still a turntable, and there was once a brick roundhouse, but it was demolished sometime in the 1970s, I was told. One remnant of the 1800s remains, a forlorn and sad but once handsome brick building. According to the Vicksburg Post (20 January 2008), it was once a warehouse and work shop for steam engine supplies, but it now sits neglected and deteriorating. 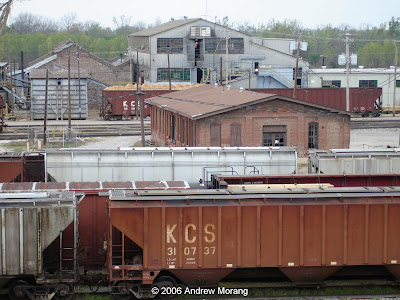 Some Vicksburg residents do not know about the warehouse. The view above shows the railroad yard from Klein Street, looking west. The steel building beyond is part of the Anderson Tully wood mill. 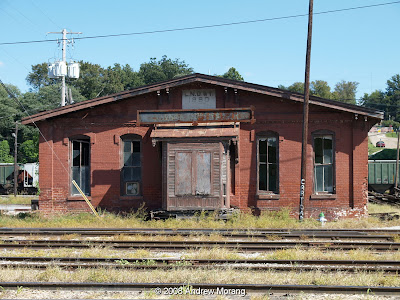 This is the west side of the building, seen from Levee Street. A marble plaque above the louvered entry shows "L. N. O. & T. 1890, R.T. Wilson, President, J.M. Edwards, Vice Pres." According to the Mississippi Rails web page, the abbreviation stood for the Louisville, New Orleans & Texas Railway, in operation from 1884 to 1892. It was sold to the Yazoo & Mississippi Valley Railroad in October of 1892 (this is the name on the Vicksburg Depot, highlighted in a previous blog entry this year). As of December 2010, the plaque had disappeared from the facade. 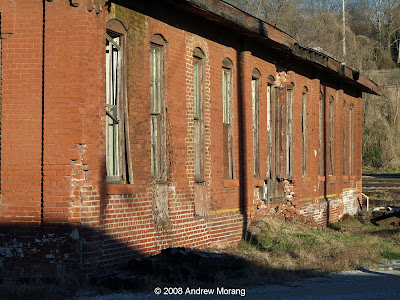 The south side has a section of wall that is collapsing. Some of the window sashes had broken and the glass has fallen out. 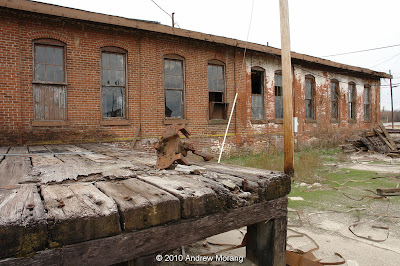 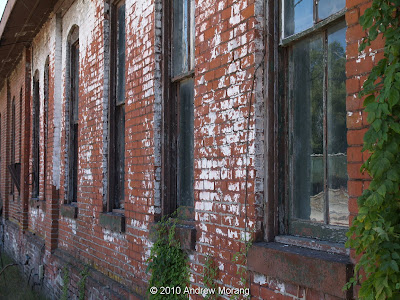 The north side had a loading dock. Overall, it is in as bad condition as the south side. 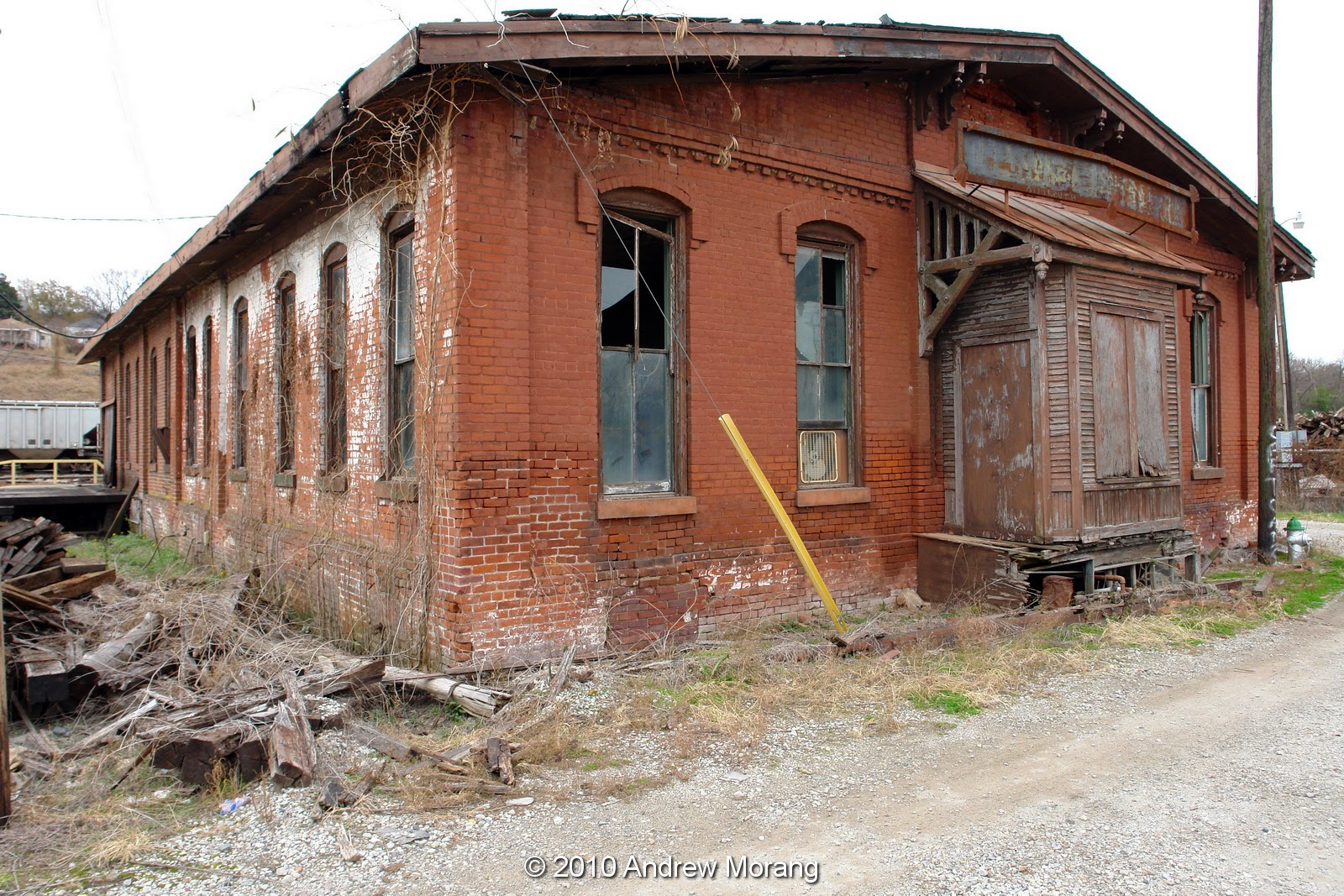 As of 2010, many of the windows were broken. Sad, this was a handsome building in its day with nice proportions. 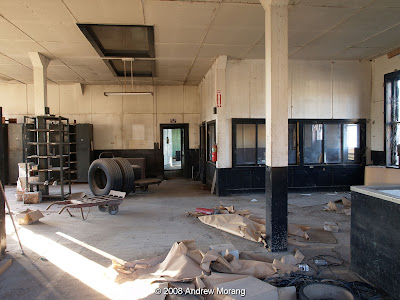 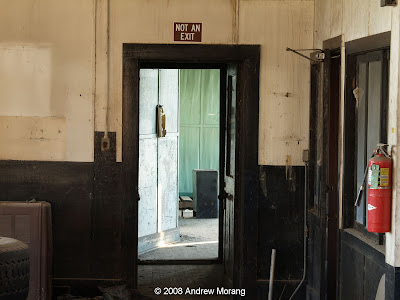 The rooms inside have old tools and furniture strewn about. I have never been able to walk inside but could take photograph through the windows. 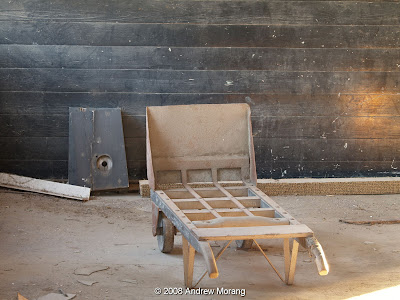 The handcart above is the type you see in old movies where the porter takes the elegant passengers' luggage into the terminal, with dramatic lighting, steam hissing from the locomotives, and the couple smoking into each others faces (and then kissing without brushing their teeth). 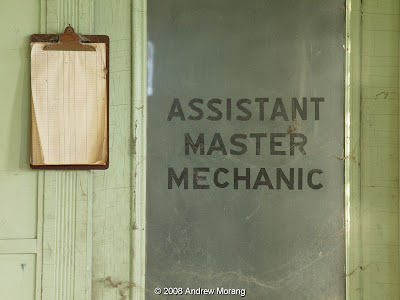 Ledgers were kept in a pre-computer age.

According to the Vicksburg Post article, there are no plans to restore the building, and calls to Kansas City Southern railroad were not returned. Another piece of our heritage will soon be lost. 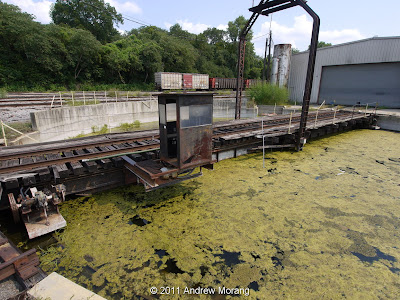 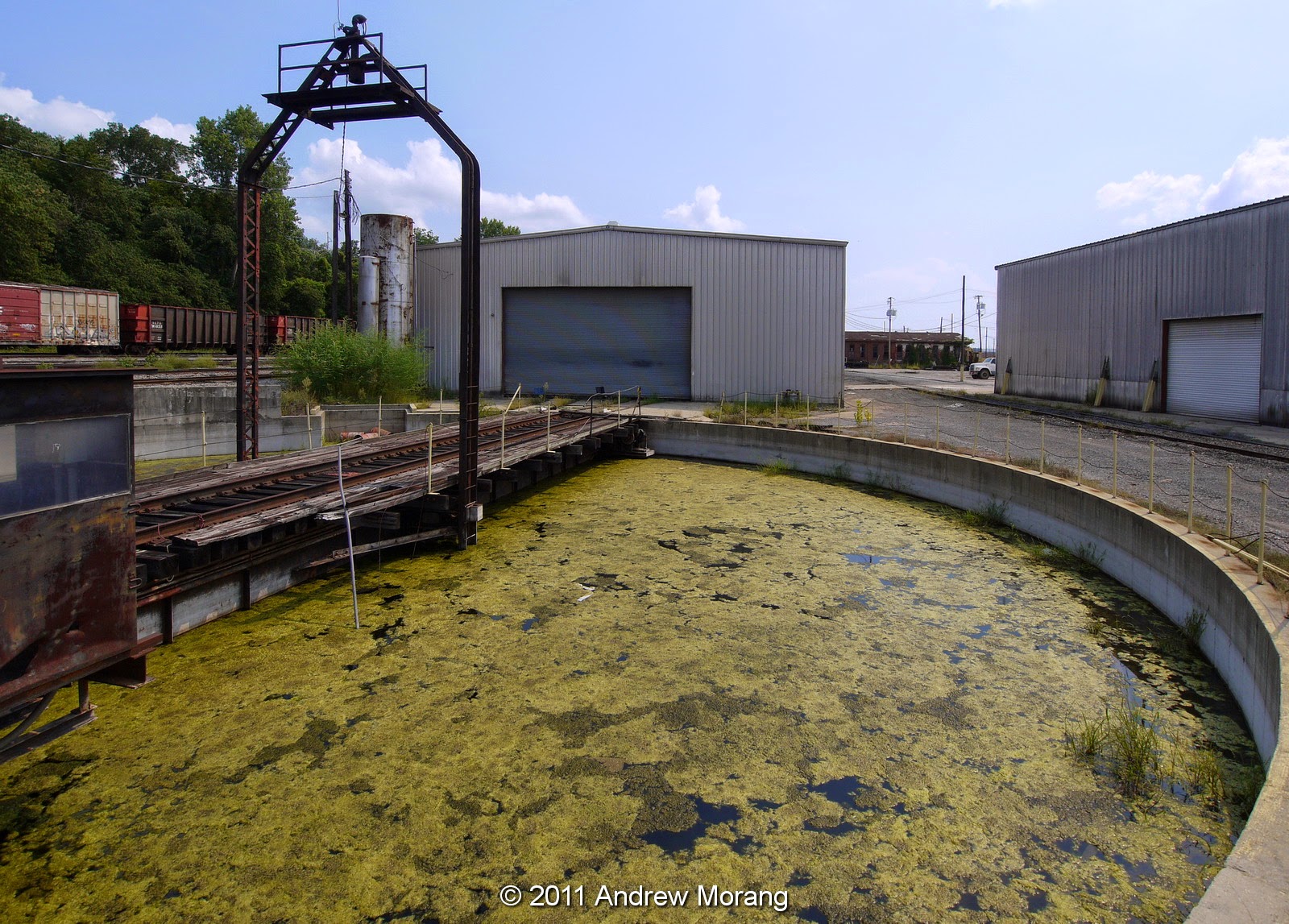 Finally, here is the turntable I mentioned earlier. KCS rebuilt it about 20 years ago. The old one looked like it had the original timbers and machinery from 100 years ago. I do not know how often it is used. The brick engine barn (roundhouse) would have been located about where the modern steel shed is situated. In the old days, all railroad yards needed a turntable because steam locomotives did not run in reverse as efficiently as forward. Therefore, the easiest way to turn them around was to place them on a turntable. There is less need now because modern diesel/electric locomotives run in either direction. 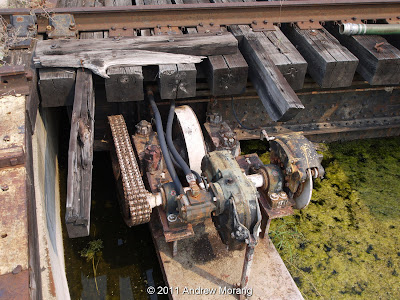 This the the motor and chain mechanism to spin the turntable. It had to be robust because of the weight of the locomotives. Notice the disk brake mechanism.

2014 update: I added two photographs.
Posted by Kodachromeguy at 21:36

I "discovered" this building while in town on the Pilgrimage earlier this year and was quite intrigued. Thanks so much for shedding a little light on the building's history. So sad to see it being allowed to crumble. I saw a tree growing up through the wall and winced.