New York and the World Trade Center: The Early Years

Ten years ago, on September 11, 2001, terrorists flew two fuel-laden jet planes into the World Trade Center towers in New York City, causing their collapse, killing thousands, and changing history. The destruction led to two foreign wars, an enormous increase in the security apparatus in the United States, stunning increases in the military-industrial complex, and myriad changes in the ways we view ourselves and the world around us. In many ways, we lost our way and the moral high ground internationally. To commemorate the terrible events of ten years ago, I looked through my archives to find photographs of the towers and other memories of New York. Although I did not live in New York during the years that the towers stood, I saw them on visits to the city, shopped in the underground malls, and once went up to the open observation deck. 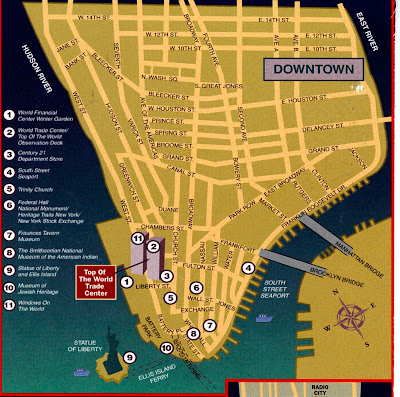 This is a map of lower Manhattan from a brochure given out to tourists who visited the Towers in the 1990s. The towers were on the southwest corner of Manhattan. They did not directly face the Hudson River, but the site they were on was artificial fill. The scale of this map is off and the Liberty Island is really much further away. 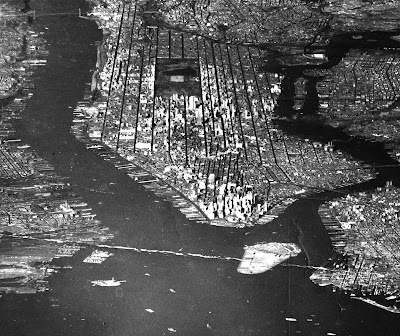 First, let's step back in history to well before the towers were built. The scene above shows upper New York Harbor and Manhattan Island at about 1940. The original photograph is from the archives of the Beach Erosion Board, U.S. Army Corps of Engineers. The archives are now housed at the Coastal and Hydraulics Laboratory at the Waterways Experiment Station in Vicksburg, Mississippi. Notice how the Hudson River (on the left) is lined with docks and wharves.

In 1940, New York and Jersey City were gritty, bustling working cities and ports. If 1940 is the correct date, war was raging in Europe, and New York harbor was a major transit origin for cargo convoys. Most of Europe was shrouded in darkness, but New York was a beacon of freedom for the few refugees who could find transit to the United States. Lights were blazing, food was plentiful, shops were stocked, and music and entertainment were everywhere - war seemed far away. The site for the towers was on the lower left side of Manhattan, then a district of small shops, factories and residences, known as Radio Row. The George Washington Bridge, completed in 1931, crosses the Hudson in the upper left of the photograph.

The island off the tip of Manhattan is Governors Island, occupied by the Coast Guard for most of the 20th century and now run by the National Park Service and the Governors Island Alliance. In the late 1930s, Robert Moses (Long Island Park Commission) pushed to build a monumental bridge connecting Manhattan to Brooklyn, with one of the bridge supports on Governors Island. Moses had such influence and control of funding sources that only President Franklin Roosevelt was able to squash the plan.

Liberty Island, with its Statue of Liberty, is the small island on the lower left, really much closer to the New Jersey shore than to New York. 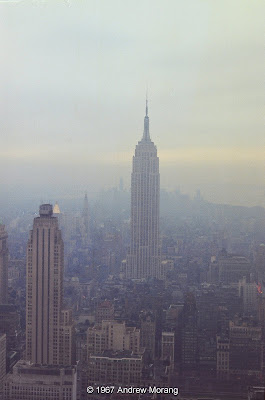 Let's move forward to 1967. I took the photograph above from Rockefeller Center, probably from the observation deck in the GE Building, the Top of the Rock. Looking south you see the Empire State Building. If they had been built, the WTC towers would have been in the far distance to the right of the Empire. 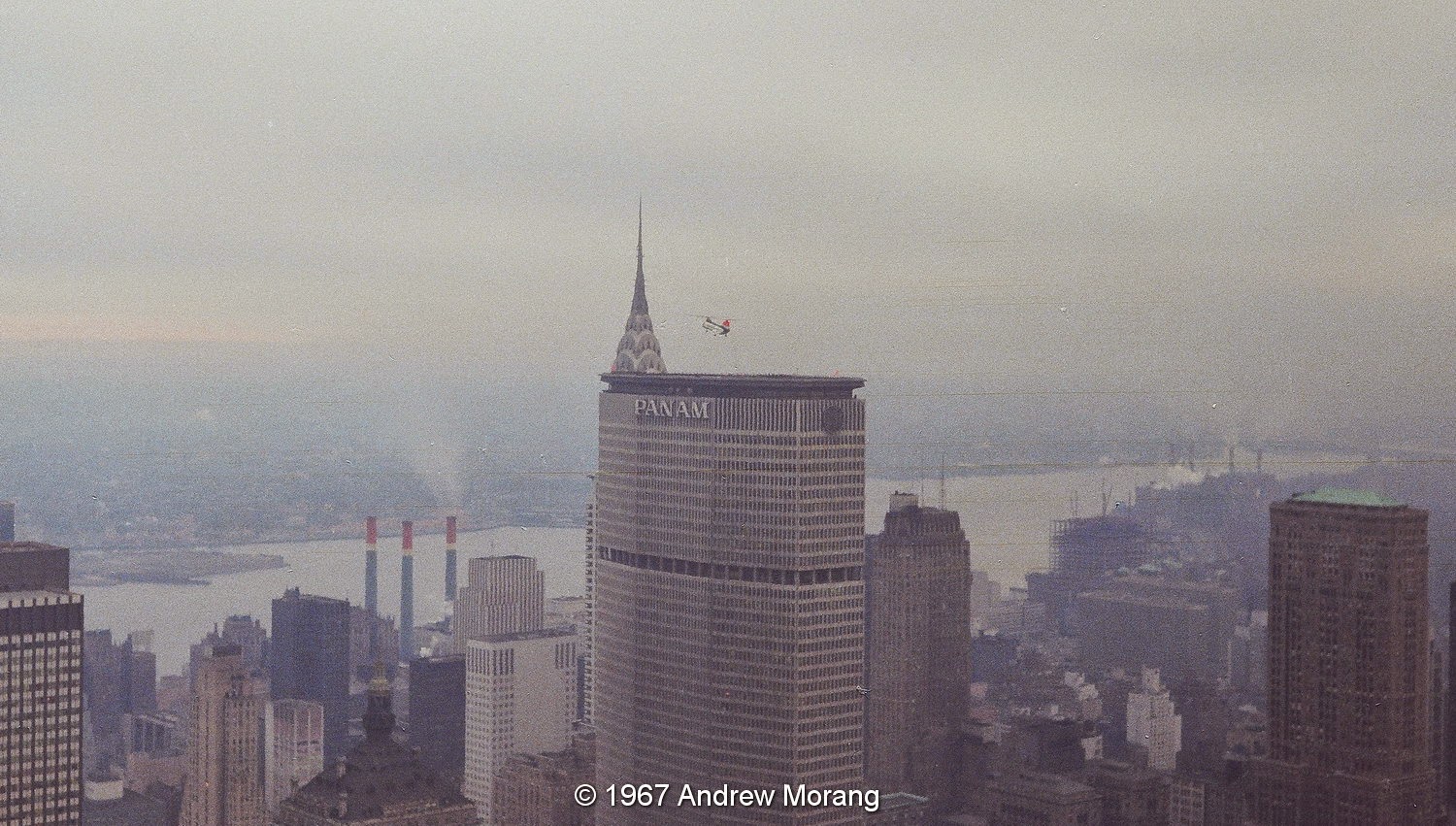 This is the former PanAm building, built over the railroad lines leading into Grand Central Station. Back then, First Class passengers on Pan American World Airways were ferried to JFK airport by helicopter that took off from the rooftop heliport. This is a Boeing Vertol BV-107 helicopter (also known as a Sea Knight), operated by New York Airways. The heliport was permanently closed after a 1977 accident, where a broken rotor blade decapitated four passengers. 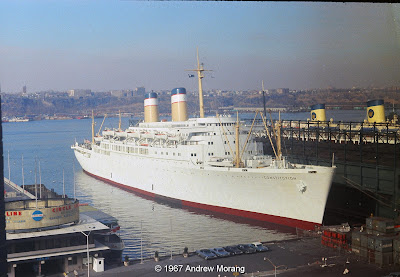 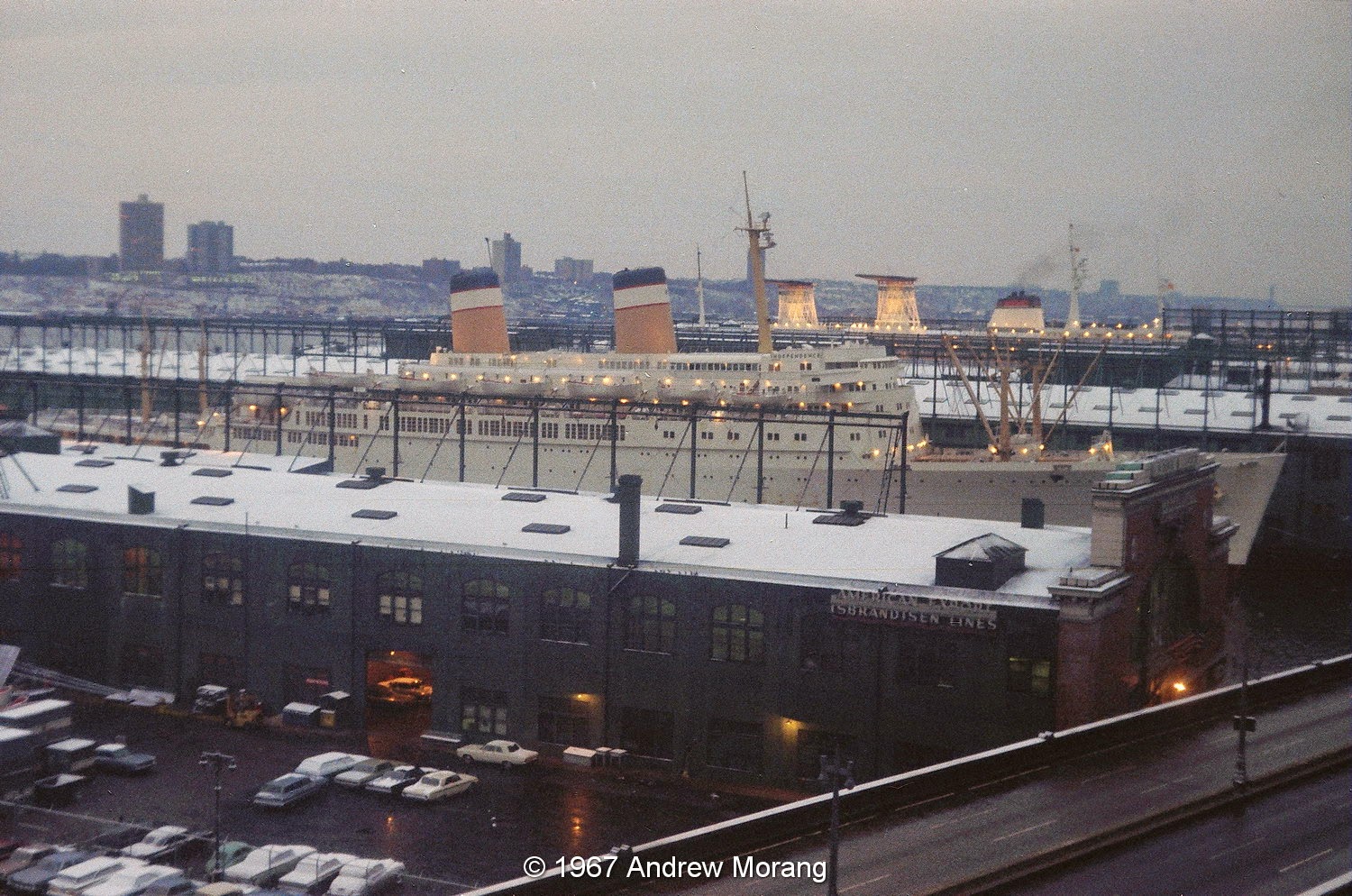 A side note: 1967 was near the end of the era of trans-Atlantic passenger traffic via ocean liner. The 1940 photograph showed how the entire Hudson River shore of Manhattan was lined with docks. But by the late-1960s, many of the docks were unused and passenger traffic on the great liners was drying up. This was largely a result of the success of the Boeing 707 jet liner, which entered service in 1958. The post-war generation was impatient and did not want to spend six days crossing the ocean (but I am glad that I made two Atlantic ship crossings in my childhood - they were fun). I took the photographs of the S.S. Constitution and the docks on color print film with a Canon range-finder camera and 50mm ƒ/1.9 Serenar lens. 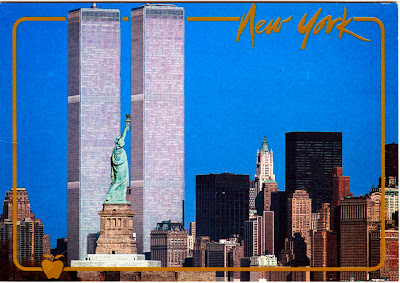 The twin WTC towers were built between 1996 and 1972. The matching buildings, designed by American architect Minoru Yamasaki, rose to 1353 feet (412 m) in height. When completed in 1972, they were the tallest buildings in the world. A Wikipedia article nicely summarizes their history and the decades of controversy and political maneuvering surrounding the project. The aesthetics of the design were resoundingly criticized at the time and for many years later as extreme examples of post-war gigantism, but eventually they became icons of New York. The undated post card above, from Golden Apple Postcards, shows the towers taken with a long telephoto lens from the waterfront at Bayonne, New Jersey. Unfortunately, the photographer was not credited. 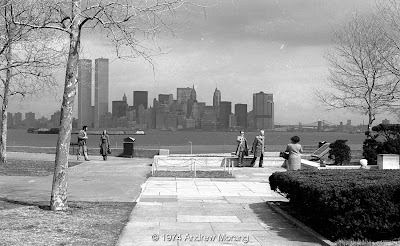 In March, 1974, I made a one-day trip to New York and took the excursion boat to Liberty Island. The South Tower had only been open two years and both towers were were only partly occupied. Attracting commercial (as opposed to subsidized Port Authority) tenants was part of the controversy that continued for years. From this vantage point, it was obvious how huge the buildings were, looming over everything else in lower Manhattan. 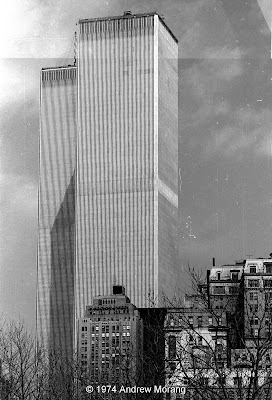 This is a 105mm tele view of the towers, scanned from a roll of Kodak Tri-X black and white film. This negative was double-exposed, adding to the dust and flaws in the frame. Still, after 35 years, the negative is intact and contains data that can be extracted. Will we be able to retrieve digital media in 35 years? (Camera: Nikkormat FTn; lens: 105 mm ƒ/2.5 Nikkor.)

I found this remarkable aerial photograph in NOAA's archives of a flying boat cruising over Battery Park. The Hudson River is in the foreground, the East River in the background. As in the 1940 photograph, you can see the many docks lining the rivers. 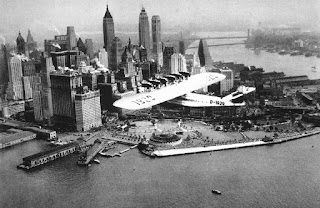 (To be continued in the next article.)
Updated with two photographs added on August 15, 2014
Posted by Kodachromeguy at 21:00