Long-term Vicksburg residents may remember that Confederate Avenue in the Vicksburg National Military Park crossed Old Jackson Road on a steel arch bridge.  The bridge and four similar structures were built in 1905 and used for many years, but by the 1970s, the other four had been replaced with modern concrete bridges.  By the mid-1980s, the steel bridge over Jackson Road was still open to pedestrians, but the road had been rerouted over a modern concrete span parallel to and west of the historic bridge.  Sometime in the early-1990s, the bridge was closed to pedestrians, but it remained unused in place, a relic of sound early 20th century engineering and construction. 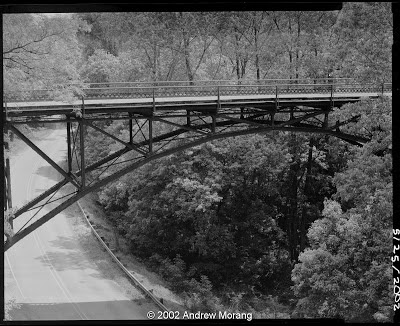 This is the view of the historic bridge from the new concrete span. As you can see, it spanned quite a deep valley with a road and creek below. 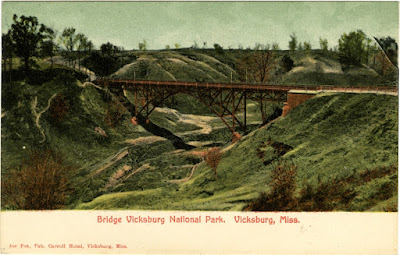 This is a postcard from the archives of the Mississippi Department of Archives and History. 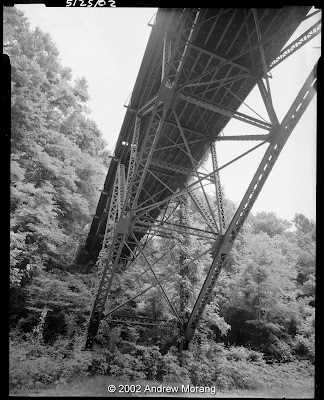 Sometime in the late-1990s, one of the footings on the south side washed away, leaving the bridge standing on only three footings. According to the Vicksburg Post (June 20, 2002), National Park Service officials concluded that the bridge was structurally in imminent danger of failure and that repairs would be too expensive. Jackson Road was closed because of the fear that the bridge would fall. 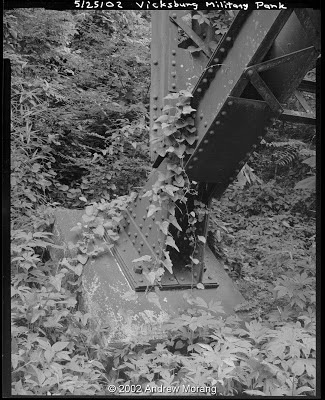 I examined the footings with a friend who is a mechanical engineer, and his opinion was that if the bridge was standing strong on three legs, there was no imminent failure mode. The footing could have been repaired with piles or a concrete pad. Regardless, the decision was made to raze the beautiful old bridge. This photograph shows one of the footings on the north side of the valley. 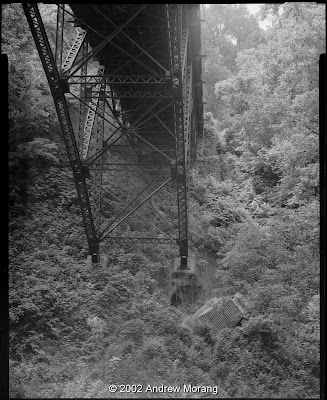 Here is the still-intact arch entering the brush on the south side. You can see the dangling footing in the lower center of the frame. The demolition job was contracted to Riverside Construction of Vicksburg, and the workmen literally pulled down the span using a bulldozer and dump trucks on June 20, 2002. The steel was cut up and taken away for recycling.

This is how we lose our architectural and engineering heritage: no one cares, and authorities take the cheap and brainless way out. For shame that this happened in a National Park.

Photographs taken with Kodak Tri-X film on a 4x5-inch Tachihara camera, using 180 mm and 75 mm lenses. I had to carry tripod and camera down Jackson road on my bicycle because it was closed to traffic.
Posted by Kodachromeguy at 21:32