Back during the British colonial era, Rangoon's Pegu Club was the rambling teak clubhouse where soldiers, petty and major bureaucrats, writers, journalists, and soldiers of fortune gathered, gossiped, plotted, acted snooty, despised the locals, and drank (mostly the latter). At its peak, the Pegu was one of the most famous gentlemen's clubs in Asia. This went along with Burma, in its peak, being one of the Empire's richest colonies, with immense resources of oil, timber, minerals, and agricultural products. Rudyard Kipling stayed at the Pegu, listened to the tall tales, and wrote his famous poem Mandalay here. George Orwell and drank and wrote here. In world War II, Japanese officers whored here. 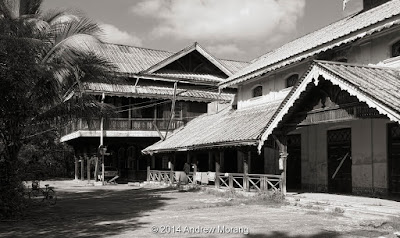 From the Myanmar Times,

"As Rudyard Kipling recalled after his one visit to Rangoon in 1889 as a young newspaperman, the club was “full of men on their way up or down”. He had time for only two stops in the city: that “beautiful winking wonder” the Shwedagon Pagoda, and the Pegu Club. Both astounded him. “‘Try the mutton,’” he was told. “‘I assure you the Club is the only place in Rangoon where you get mutton.’” But what stood out most was the morbid chatter about “battle, murder, and sudden death”. Its casual nature (“‘that jungle-fighting is the deuce and all. More ice please’”) gave him his first glimpse of the wars colonialism waged beyond its walls." 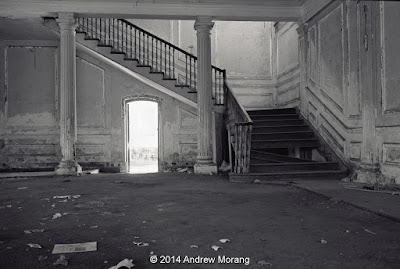 I wrote about the Pegu Club before (please click the link), but I recently scanned some more Tri-X negatives from my 2014 trip and thought the film views were more appropriate for this crumbling clubhouse. The view above is the grand entry hall (I think). A "Boy" (one of those despised brown natives, of course) would have welcomed a visitor with a cool drink. The stairs were collapsing and I did not risk climbing to the second floor. 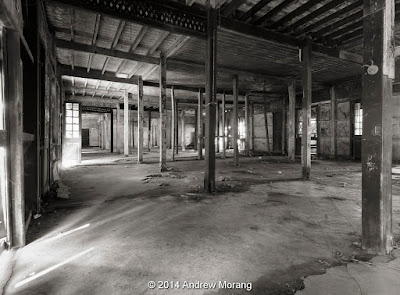 There were so many rooms, I really can't tell how some were used decades ago. This room was in the rear of the building. (This is a digital image taken with a Panasonic G3 camera.) 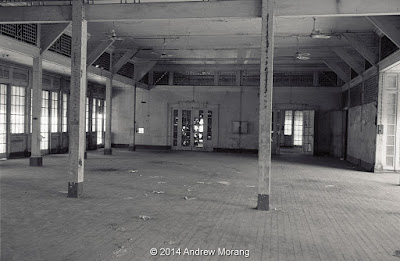 This handsome room on the second floor had a large space without pillars. Was it a smaller ballroom or dining hall? 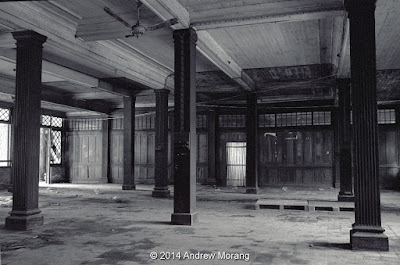 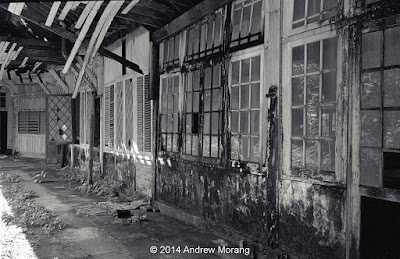 An inner courtyard must have once been a formal garden. Mildew was attacking the windows, but I was surprised that most were intact. There is much less graffiti or destruction than you would expect. But will the Yangon Heritage Trust ever be able to raise the funds to restore the building and grounds? And how would it be used? A 2014 article in the New York Times outlines some of the challenges in preserving Rangoon's fabulous architectural treasures. 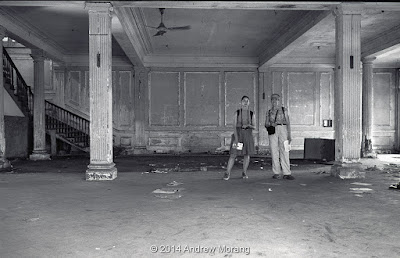 We encountered a young lady from Hong Kong wandering around by herself. She had a film camera and asked how long I had been into film.

I took Photographs 2, 4, 5, 6, and 7 with a Leica M2 camera with a 35mm ƒ/2.0 Summicron lens. This is the 7-element type 4 Summicron from the late 1990s. I braced the camera on ledges or windowsills because of the long exposures. I used Kodak Tri-X 400 film, developed in Kodak HC110 developer, dilution B at 68° F, and then scanned the negatives with a Plustek 7600i film scanner. The negatives had some lint and spots, which I cleaned with Pixelmator software.

December 2016 update: A corespondent in Europe wrote that a friend had tried to visit the Pegu Club, but it was closed and a guard was posted. I'm glad my wife and I visited in 2014, when it was open.
Posted by Kodachromeguy at 15:43

Hello, I am interested in your photographs of the Pegu Club for a story I am working on. Please message me when you can.