Dear Readers, I need to catch up and finish writing some notes on my last Asia trip, during which I used Tri-X film in my Leica M2 camera. 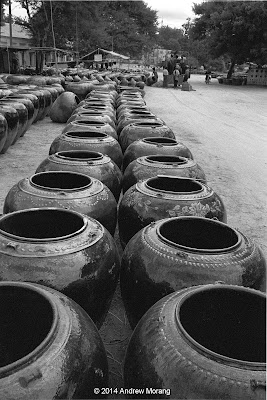 Nyaung-U is a town in Nyaung-U District in the Mandalay Region of central Burma. It is on the left bank (east side) of the Irrawaddy River about 4 km from historic Bagan. My group stopped for lunch at an outdoor restaurant, but I found the adjoining pottery manufacture to be more interesting than lunch. 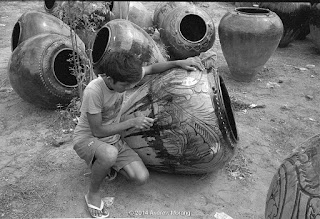 The pots are fired and then decorated. I am not sure if they are fired a second time. 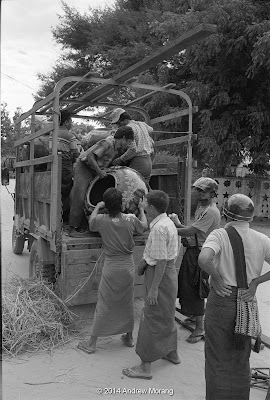 Some of them were being loaded into a lorry. Note the lack of steel toe boots, just flip flops. 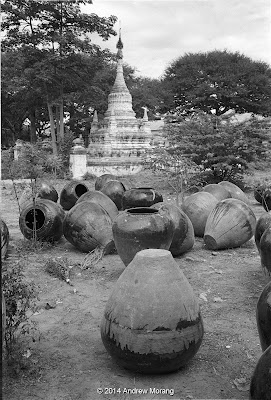 Being near Bagan, there were pagodas and stupas in town, some intact, some crumbling. 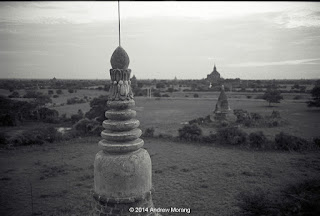 Ancient Bagan (Burmese: ပုဂံ) is one of the architectural wonders of Asia. According to Wikipedia, "From the 9th to 13th centuries, the city was the capital of the Kingdom of Pagan, the first kingdom to unify the regions that would later constitute modern Myanmar. During the kingdom's height between the 11th and 13th centuries, over 10,000 Buddhist temples, pagodas and monasteries were constructed in the Bagan plains alone, of which the remains of over 2200 temples and pagodas still survive to the present day."

A 2002 article in Smithsonian, titled "Sacred and Profaned," outlines some of the  challenges with preserving the temples at Bagan. Many have been rebuilt with new bright brick or thick concrete, in shocking contrast to the ancient carved sandstone facades. A major problem with concrete, other than its lack of authenticity, is its rigidity. Bagan is in a seismically active area, and concrete makes the buildings rigid and less able withstand tremors. 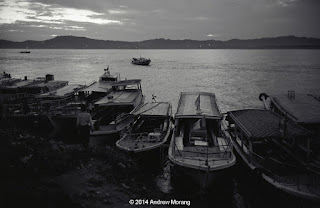 We took an evening boat ride on there Irrawaddy. We were told that the lights on the far (west) bank  of the river were oil-drilling operations. Burma was one of the pioneering oil-producing areas in the 1800s, rivaling Pennsylvania and the Caspian region. I do not know what the reserves are now, but it may help with the country's foreign trade as it modernizes.

Photographs taken with a Leica M2 camera with 35mm or 50mm Summicron lenses. The 35 was the 7-element type 4 Summicron from the late 1990s. I think black and white film suited the mood here perfectly. I exposed the Tri-X at ISO 320 and developed it in Kodak HC110 developer at dilution B for 4:30 minutes and scanned the negatives with a Plustek scanner. There were small flaws and scratches on some of the negatives, which I cleaned with Pixelmator software. I thank my travel companions for being patient while I took film photographs.
Posted by Kodachromeguy at 22:14