Dear Readers, as I noted in the previous article, in August-September of 2019, I drove to Flagstaff, Arizona. I headed west across Louisiana and then northwest across east Texas. The town of Denison was a convenient overnight.

In this article, I will show a few frames from Denison. In future updates, I will continue west to Wichita Falls and then northwest on US 287 towards Amarillo. This will form a "Texas Panhandle" series. Once you reach Amarillo, you are back on the Mother Road, Route 66. I will add some more articles to my 2016 and 2017 series on Route 66. To see these older articles, type "Route 66" in the search box. 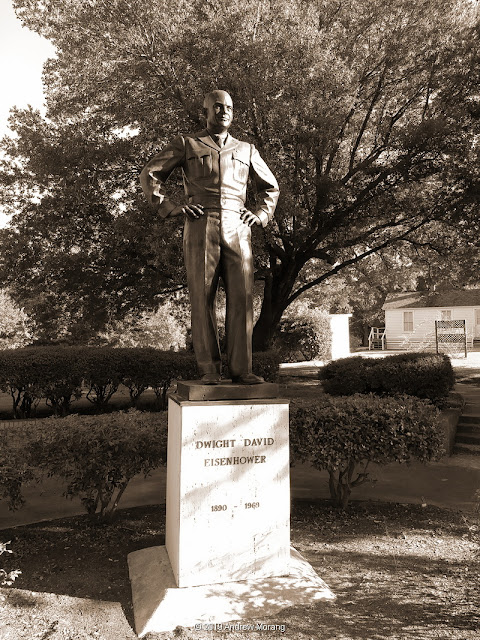 Denison is a mid-size town north of Dallas near the Arkansas border. It may be best known for its famous son, Ike Eisenhower, the army general and statesman who served as the 34th president of the United States from 1953 to 1961. He served honorably and with utmost respect and honor by all. And he treated his party members, party opponents, European allies, and even the Soviets with respect - contemplate and contrast with the illegitimate and traitorous coward in the White House today (2017-2021). 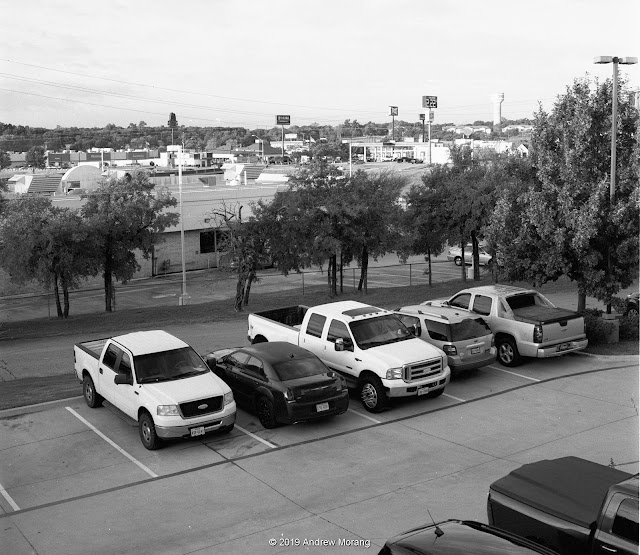 The morning view from the Best Western was rather inauspicious. Strip America, billboards, and parking lots. Yuck. 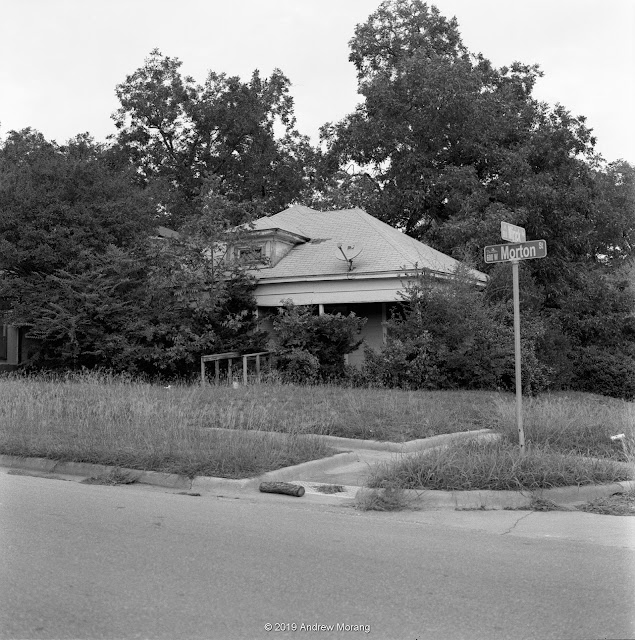 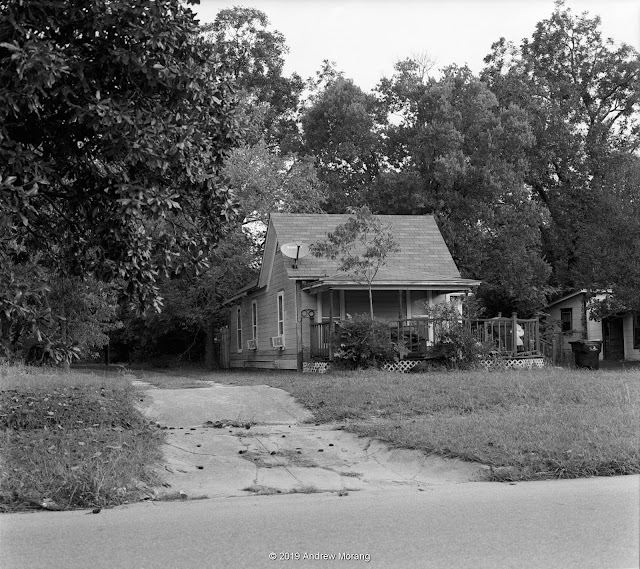 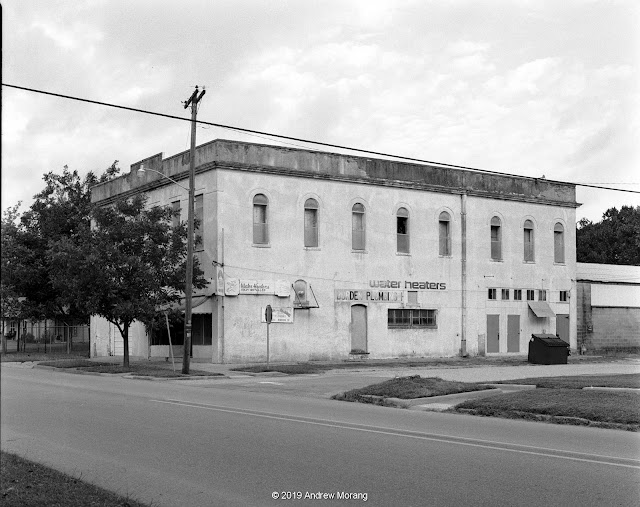 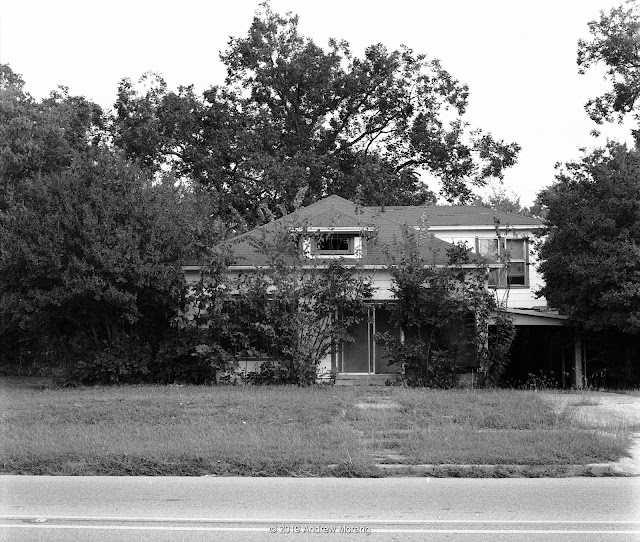 I drove downtown to the historic neighborhood at Morton Street. This was more interesting. There were plenty of early-20th century cottages - some restored, some derelict. A square old-time commercial building contained a plumbing supply company. 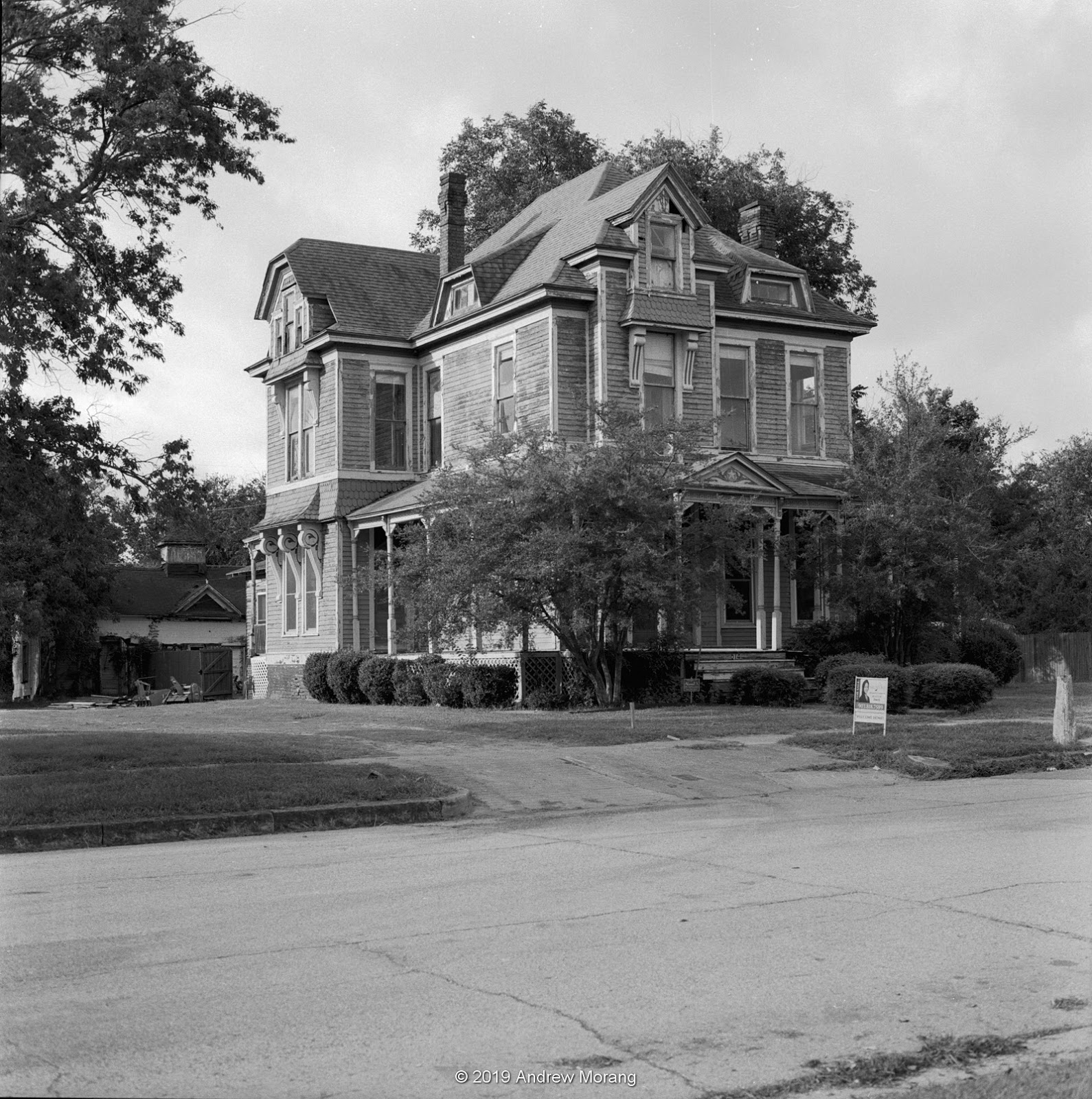 A block away, at 614 W. Sears, a Victorian mansion. And it was for sale! Just what I need, another fixer-upper. The roof was modern, so I assume the structure was sound. But it still needed a lot of work (= serious $$). 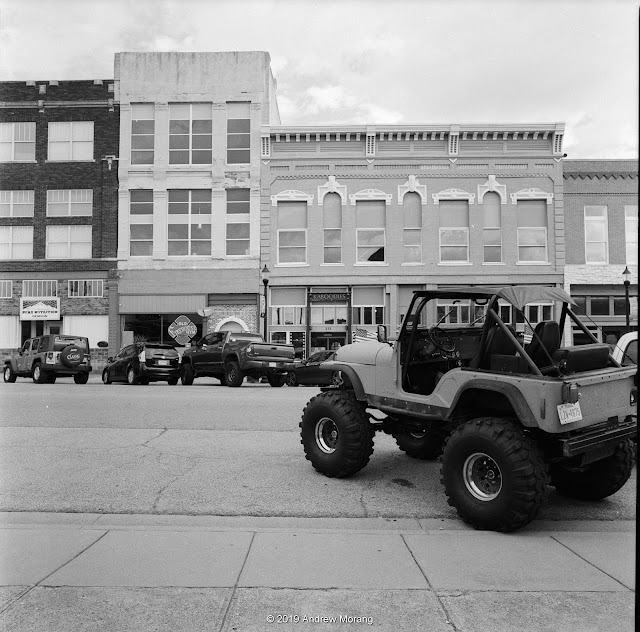 My destination that morning was CJ's Coffee Cafe on Main Street. The view out the front was classic small-town Main Street: square-front early 20th century commercial buildings and Jeeps with big tires. My ordinary sedan with its 16" wheels is so inadequate in comparison.
Main Street in Denison looks pretty good. It was clean, and many of the stores had tenants, although I could not tell if the upper floors were occupied. Main Street Motors offered some beautifully-restored classic cars. Maybe I should have bought this gorgeous Chevrolet for my trip west towards Route 66. The little Volkswagen cabriolet in the back was a beauty, too. 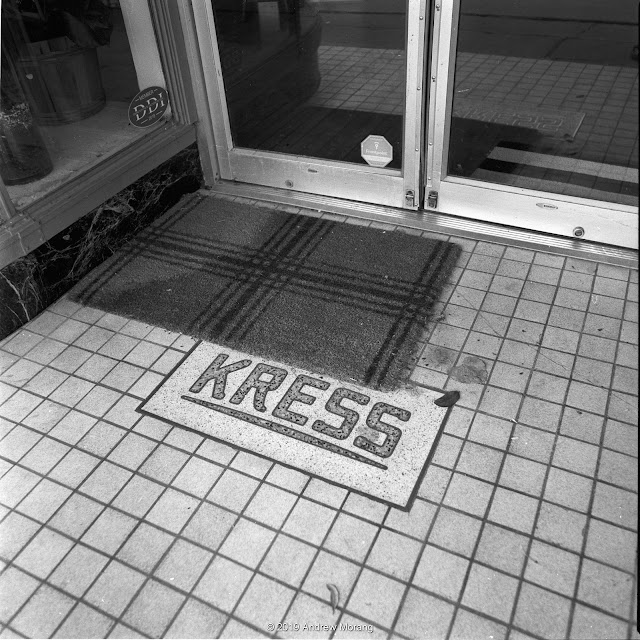 Most of the major brands had stores here at one time, such as Kress, Sears, and Woolworth's. The Kress premises now house Revolution Coffee Company. 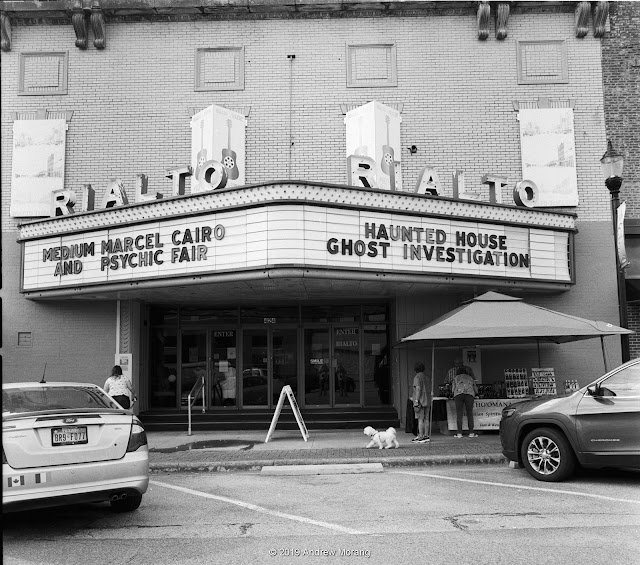 The Realto Theater was hosting a Ghost Investigation and Psychic Fair. Incense wafted through the air. People came and went in odd costumes. The Rialto was one of many cinemas and vaudeville theaters that once lined Main Street. Howard Hawk's epic drama, Red River, had its premier at the Realto. 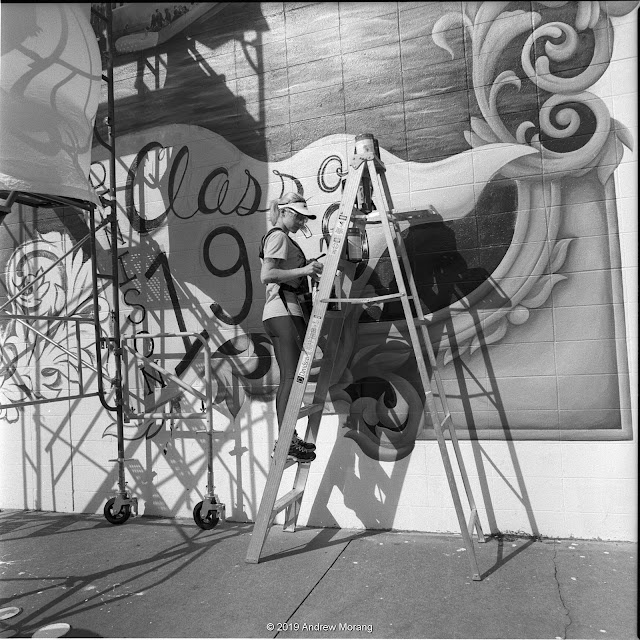 Around the corner on Barrett, an artist was painting a mural on the side of a building. Nice work!

Denison played a small part in the twisted and arcane art world in the late-1990s. For a short while, the First National Bank stored the famous Quedlinburg Treasures in its vault. During World War II, the Lutheran Church of St. Servatius in Quedlinburg, Germany, placed manuscripts and other 800-year-old objects in a mineshaft for safekeeping. At the end of World War II, an American officer with an art background, Mr. Joe Meador, took some of the art works and mailed them to his family in Whitewright, Texas. He died in 1980, and family members tried to sell some of the items. There followed an international search, convoluted lawsuits, and the final return of most of the art to the Lutheran Church.

A documentary filmmaker from Denison, Cassie Hay, wrote and produced a documentary about the Quedlinburg Treasures, "The Liberators." I thought the film was a bit choppy and confusing, but it documents how a German art historian tracked the treasures to a small town in Texas. Two of the stolen items have never been recovered, and one family member in the movie surmised that they may have been given to the Goodwill store (wow!).

This ends our short stopover in Denison. It is a cheerful town, and I would enjoy visiting again. The square black and white photographs are from Kodak Tri-X 400 film, exposed at EI = 320 in a Hasselblad 501CM camera with 50mm and 80mm Zeiss lenses. I used yellow or green filters on some frames. Click any picture to expand if you want to see more details.

The next article will be a quick color film trip through the Texas Panhandle. Hang on for the ride.
Posted by Kodachromeguy at 08:00

Hard to imagine a better combination than Tri-X and a Hasselblad.
Dennison looks like it is doing somewhat better than most of middle America's small towns.

The Victorian at 614 W. Sears does is not in as bad a shape as one would expect from the outside, at least as indicated by the many photographs of the interior on Zillow: https://www.zillow.com/homedetails/614-W-Sears-St-Denison-TX-75020/193021769_zpid/. Their sale history lists that it recently sold for $124,900.

Mike, you are right. Denison is more prosperous than many other mid-size and small towns in America. Possibly it is close enough to Dallas/Fort Worth for some spillover of city folks. Also, the lakes to the north attract tourists. and W. White, most of the housing stock looked reasonably sound and maintained. You will see more urban decay further west - wait for future articles.