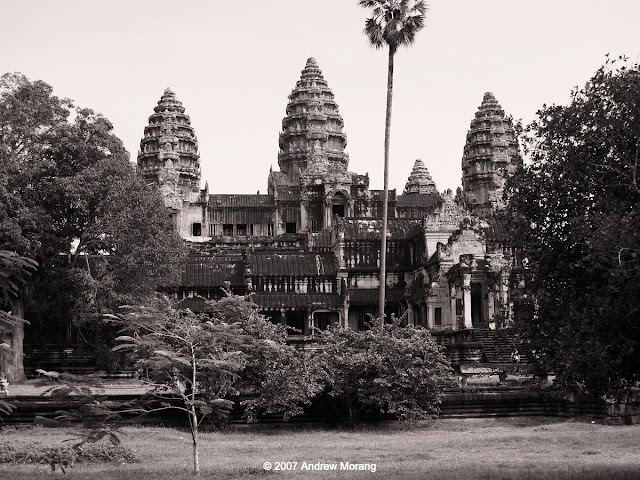 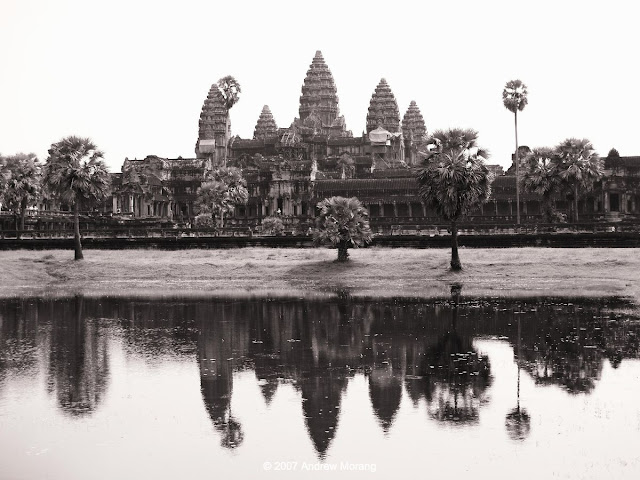 The monumental temple of Angkor Wat is huge in every possible dimension. The central towers were taller than the steeples of Notre Dame. Angkor Wat defies the imagination. How did they build this? How did the emperors pay for it? How much of the city-state's annual GDP went to construction and maintenance? From Wikipedia,

Angkor Wat (/ˌæŋkɔːr ˈwɒt/; Khmer: អង្គរវត្ត, lit. 'temple city / city of temples', located in northwest Cambodia, is the largest religious structure (temple complex) in the world by land area, measuring 162.6 hectares (401+3⁄4 acres). At the centre of the temple stands a quincunx of four towers surrounding a central spire that rises to a height of 65 m (213 ft) above the ground. The temple has three rectangular galleries, each raised above the next. It lies within an outer wall 3.6 kilometres (2+1⁄4 miles) long and a moat more than five kilometres (three miles) long.

The carved lions guarded the monumental entryways. It is not hard to understand how the regal lion was used as a symbol of royalty and power from Egypt to Mesopotamia to Angkor to China.

Thousands of these bas relief maidens line the halls. Every one is individual, but the feet are always sideways. According to the excellent and readable description of Angkor Was in tourismcambodia,

The starkness of the exterior of the second level gallery is offset by the decoration of the interior. Over 1,500 Apsaras (celestial dancers) line the walls of the gallery offering endless visual and spiritual enchantment. These graceful and beautiful females delight all visitors. They were crated by the Churning of the Ocean of Milk.

When one first walks into the courtyard the multitude of female figures on the walls and in the niches may seem repetitive but as one moves closer and looks carefully one sees that every one of these celestial nymphs is different, the elaborate coiffures, headdresses and jewellery befit, yet never overpower, these 'ethereal inhabitants of the heavens' Apsaras appear at Angkor Wat for the first time in twos and threes. These groups break with the traditional of decoration kin other part of the temple by standing with arms linked in coquettish postures and always in frontal view except for the feet, which appear in profile.

Note the amazing snake motif hairstyles. Also note that the big toe on the left foot is raised. I wonder what the symbolism is for the toe?

Ah, the contemporary lovelies. But the big toes are not pointing up. And the hair is a bit boring.

Siem Reap is the main urban area south of the temple complexes and is the location for most (or all ) hotels. It has an international airport to support the tourist trade. 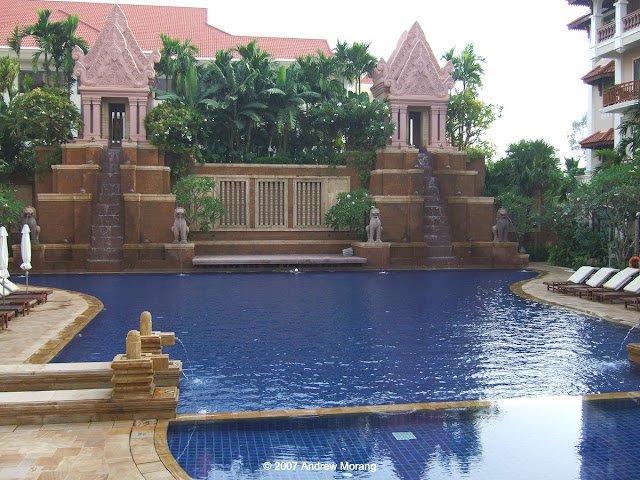 Wait a minute. There is a temple with a pool in Siem Reap? Oh, no, this is just the Sokha Angkor Resort. It looks like the Cambodians still believe in monumental architecture.

Extensive breakfast buffets, attentive and utterly polite staff, immaculate cleanliness - this is the life. Many of the other hotels in Siem are similarly spectacular. They put to shame what we call "luxury" hotels here in USA, let alone the quality of the cuisine.
The black and white scenes are digital images from an Olympus E-330 4/3 camera. I applied a pseudo Ektachrome simulation using DxO 5 software, which created the subtle selenium/purple tone.
Posted by kodachromeguy@bellsouth.net at 08:00

Another fascinating look into Asian countries and customs! I did not the slightly lifted great toe, and wondered about it also. I found the snake motifs very interesting too, as well as the delicate posing of the hands.

Thank you for the comment. I have seen dancers in Thailand and Ceylon (Sri Lanka today) with similar delicate hand motions. These dance traditions must have been carried down over the generations. But I do not know the symbolism of the toe.