Clay Street comes into the core of old Vicksburg from the east.

When the Methodist minister, Newitt (or Newit) Vick, platted the town, he intended Jackson Street to be the main east-west commercial street and laid it out as two-lane. But commerce did not develop that way and Clay Street became the main road with hotels, shops, and commercial buildings. The National Registry of Historic Places Multiple Property Documentation Form, written by Nancy Bell of the Vicksburg Foundation for Historic Preservation, includes a readable and detailed summary of the city's growth and architectural changes over the decades. The "urban renewal" fad of the 1970s (i.e., free money from the Federal government) led to the demolition of numerous historic buildings and construction of some revolting and largely-unused concrete parking garages. Someone should follow the money and see who really benefitted from these "renewals."

In this short article, I will show you some photographs from lower Clay Street, the area from around Cherry Street and further west, heading towards the Yazoo Diversionary Canal.

The Wells and LaHatte company has sold household appliances in Vicksburg since 1935. It is nice to deal with a locally-owned company. They moved from their old building are now one block west at 1301 Monroe Street.

915 Clay Street is an example of the type of multi-floor wood houses that once were more common around town. This one is pretty rough and had been converted into apartments. As of this writing (December 2021), the roof is collapsing into the interior and the house is settling. The photograph of the front door does not have barrel distortion; the house is settling (squashing?) unevenly into the cellar.
Years ago, an identical wood house occupied the lot to the west, address 911 Clay. In the 1980s and 1990s, Offshore & Coastal Technologies, Inc., had its offices there, but the company closed and the building burned about 10 years ago.
The Junius Ward YMCA (originally the Young Men's Christian Association) was a center of social and sports activities for decades. The upper two floors contained residence halls for single men. I wrote about the 'Y in 2010 and have posted more interior photographs at other times. The building closed in 2002 when the 'Y moved to a modern facility east of town. No one has been able to reuse the old building, and it sits empty and forlorn. Someone did repair the roof about 10 years ago, but that was the last renovation that I have seen. I read that the building would need modern electrical service, fireproof stairs, and many other serious renovations to make it usable as apartments.
The Old Courthouse Museum sits on a hill in the upper right of the scene. 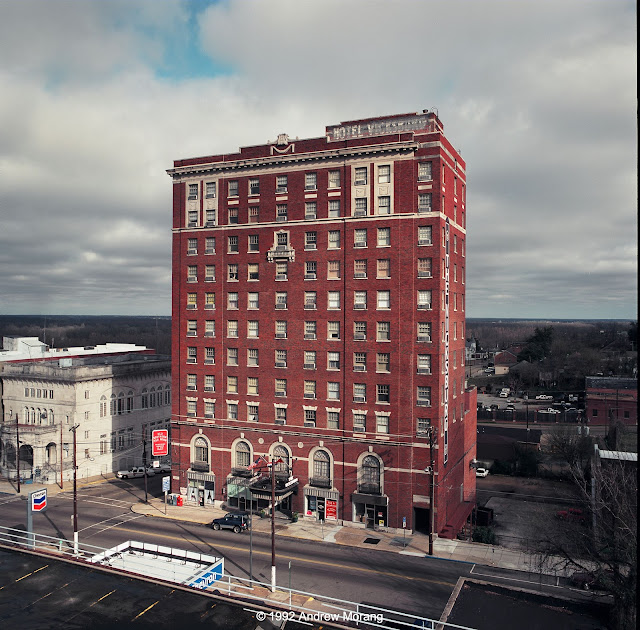 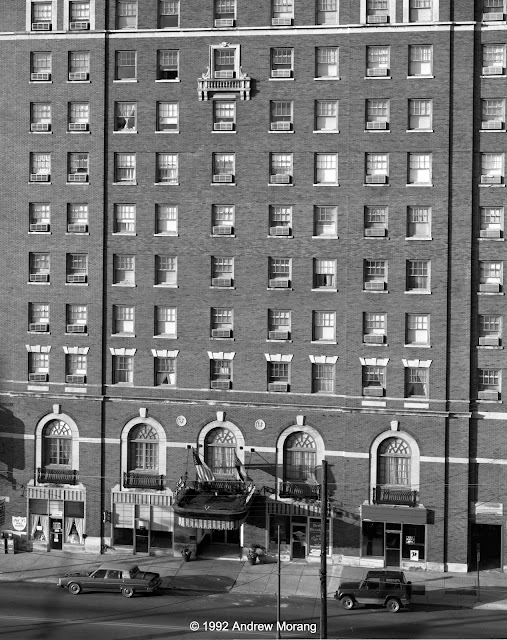 The Hotel Vicksburg at 801 Clay Street opened in 1929 and was the city's sophisticated hotel during the mid-20th century. It was the tallest building in town and even had a radio studio on the roof. Today, it is is the home of the Vicksburg Apartments. I know several people who rented units there and really liked their accommodations. Today, most inns and hotels are generic chain accommodations near the interstate.
Across the street from The Vicksburg is the elegant 1916 B'nai B'rith Literary Society building, now known as the B.B. Club. In the 1980s and 1990s, this building housed the Vicksburg Police Department. After the police moved to their new building on Veto street, the former mayor, Mr. Lawrence Lyons, bought the BB building and restored it with great care. The police had covered the plaster walls with panelling, but the underlying decorations and plaster work were largely intact.
Note the sign for The Vanishing Glory. This was a multi-projector slide show held at the Strand Theater. Glory closed in the early 2000s and the Westside Theater Foundation restored and modernized the Strand. I photographed in the Strand in 2011 at the beginning of its restoration.
The Strand Theater is in the Adolph Rose Building, circa 1890 (717 Clay Street). This is one of the best of the remaining late-1800s commercial buildings in Vicksburg, demonstrating the City's commercial and cultural prosperity in that era. It is on the National Register of Historic Places. I photographed in the Alolph Rose Antiques gallery and will post some pictures soon (stand-by for artsy photographs).
Go west a block to Washington Street, and Clay Street becomes much steeper as it descends to the flood walls and the Yazoo Diversionary Canal. In the 1800, this was the main channel of the Mississippi River. Steamboats tied up along this waterfront, but now the view is marred by the concrete walls. 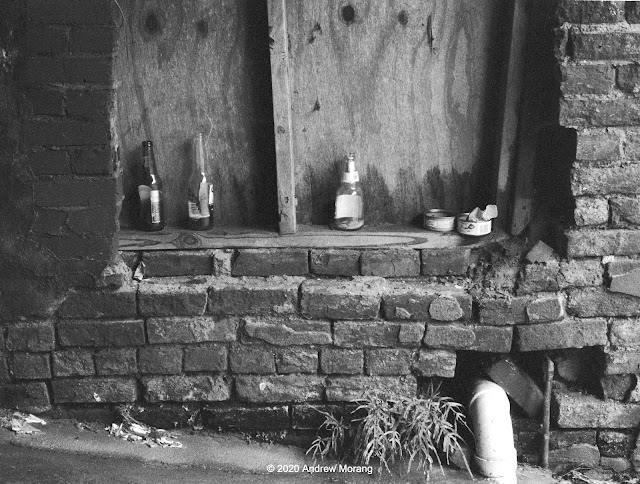 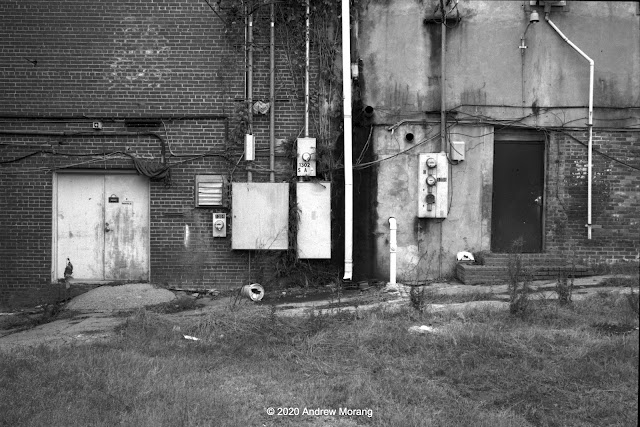 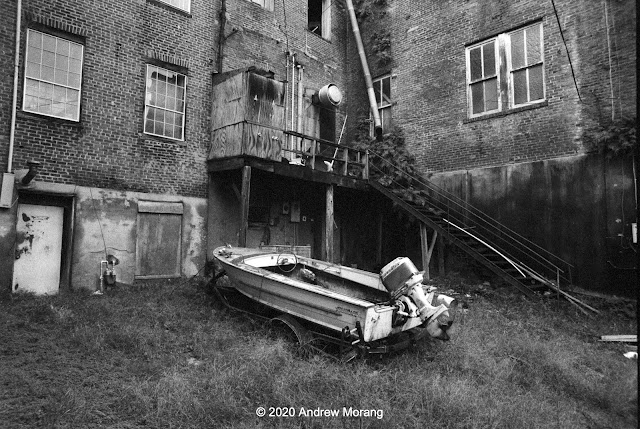 All right, the dead boat in one of the lots behind some Washington Street buildings is picturesque.
This ends out short tour of lower Clay Street and vicinity. Standby for more of Vicksburg in the future.
Merry Christmas and Happy Holidays to all of you readers. Thanks for riding along.

UPDATE:  I found a digital color photograph of the old warehouses on the north side of Clay Street. What would one find in one of these boarded-up buildings?

I don't usually comment on it, but I always love these looks at these places. I look forward to more.

I prefer picturesque to "plain ugly." It is always a fun ride along.

Thank you all. Some people complain that all my photography is "picturesque."

Your photographs tell a story. When you can see art in the everyday and the ordinary, it is a gift. I appreciate that you share it. (Just saying, the photograph of the line of urinals against the blue tile wall in the old hospital will always be one of my favorites.) Happy New Year, and let the picturesque continue!

I found your site completely by accident. Fascinating. Many of my ancestors moved to Vicksburg in the 1880's. Do you have photos of First East Street?

Yes, Clay, I do have photos of First East Street. I will put that on a list to post in the future. Thanks for giving me a nudge.