Vicksburg once had as many as four downtown theaters (cinemas). Some of my coworkers remember how they saw a show at least weekly, often on Saturday night. One of these was the Saenger Theater at 1203 Walnut Street, whose roof was blown off in the 1953 tornado. A number of children were killed. A dramatic post-storm photograph is at this web page: Saenger 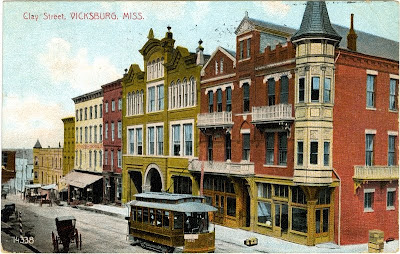 The subject of this post is the Strand Theater, located in the Adolph Rose Building at 717 Clay Street. The Adolph Rose is the handsome gold-colored building in the undated postcard, from the Cooper postcard collection at the Mississippi Department of Archives and History. 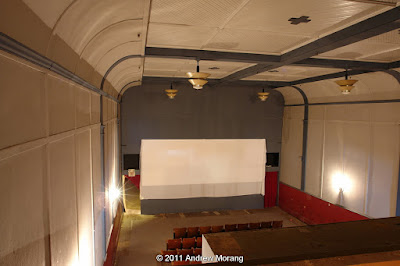 The theater operated from 1932-1963 and afterwards housed a Civil War slide and sound show called "The Vanishing Glory." Glory closed about 2005 and the space has been unused since then. The photograph above shows the configuration when Vanishing Glory used it. The screen was mounted in front of a partition that split the original long seating area, leaving an unused area behind. Originally, this would have been an unusually long, skinny venue to show movies. 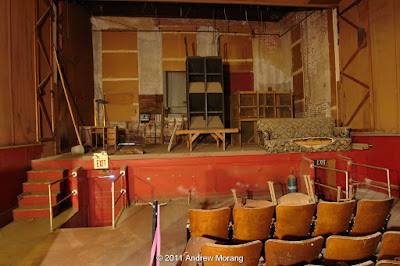 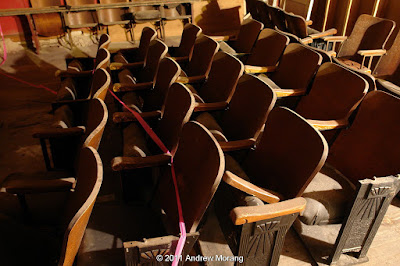 The prominent local merchant, Adolph Rose, built the handsome Victorian Romanesque building about 1890 for his goods company (Vicksburg Post, 12 June 2011). At that time, it did not contain a theater. Around 1930, it was sold to Feld Furniture, and the ground floor was renovated to house two long thin commercial establishments, a store on the left (now an antique store), and the theater on the right. The seating area extended most of the way from the lobby to the stage at the rear of the building. It must have been a rather odd tunnel-like geometry where the front patrons were practically under the screen and the rear patrons a long way off. The photograph above shows the original stage at the back of the building. This is the area that Vanishing glory closed off and was unused after 1963. 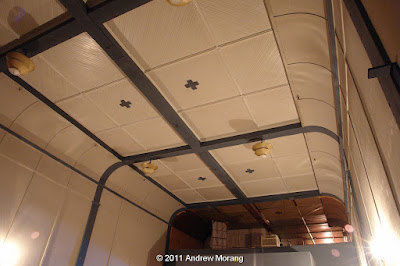 When the theater was retrofitted into the Adolph Rose building, the walls were made of painted press-board. The fitting was skillful, and you can see how the panels curved at the edges of the ceiling. I suppose press-board was selected because it absorbs sound. The sound came from a huge RCA speaker behind the screen. The box is still present, but the speaker units are gone. 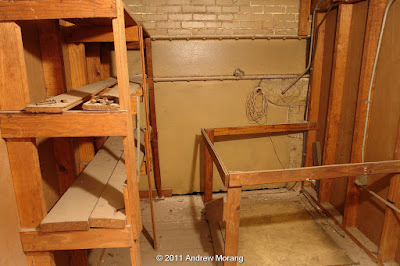 The second floor is rather interesting. The little storage room with the racks was for storing film reels. A trap door on the floor opened and a large fan in the wall drew up air though the room and across the reels. Before about 1940, most commercial film was nitrate-based and could spontaneously ignite when it degassed. Theater designers then knew that the film had to be ventilated to reduce the danger of fire. (As an aside, that is why modern photo film has "Safety Film" printed on the edge: it is Ester or Polyester-base and does not ignite spontaneously.) Archivists now store historic movie reels in refrigerated rooms. 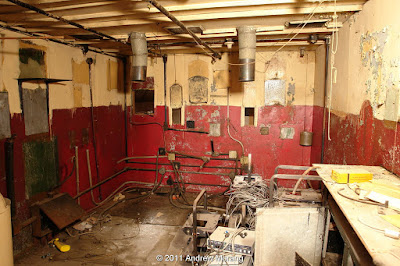 This is the projection booth. It is lined with steel, again to reduce the danger of a fire burning down the rest of the building. The projectors (long gone) were mounted on the floor and projected out small openings to the screen far away. So much heat was generated, the projectors were vented to metal flue pipes that went up to the roof. The earliest projectors may have used carbide lamps. The booth windows were equipped with guillotine-style sliding panels. The panels were held up with steel wires equipped with a lead plug. If a fire broke out, the plug melted and the guillotine door popped down abruptly, cutting off the air supply. 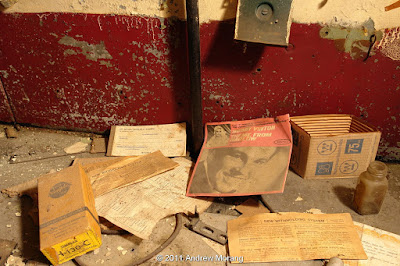 Here are some papers and remains on a shelf in the projection room, including IRS instructions for tax year 1966. 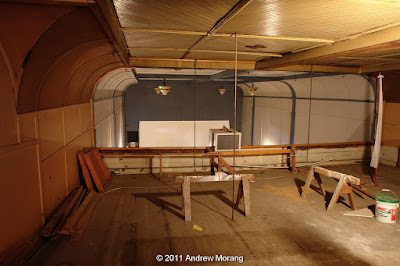 This is the balcony, where "colored" people had to sit in the old days. When I lived in Asia in the 1950s, we white Europeans sat in the balcony. 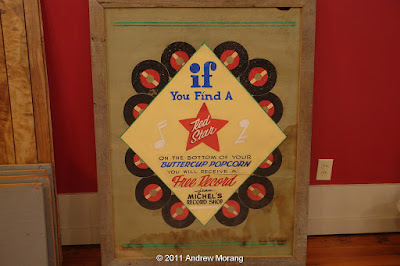 The lobby area was extensively changed by Vanishing Glory, but a few remnants from the movie era remain.

The good news is that Westside Theatre Foundation, a Vicksburg theater group, is renovating the old Strand and plans to hold live performance there. They have removed the partition wall and will expand the original 1920s stage. Jack Burns generously let me take photographs a few weeks ago. It is an ambitious project and I'm thrilled they have taken it on. They currently hold their productions at the Coral Room in the Vicksburg Hotel, another historic building in Vicksburg that needs its own blog entry.

I took these digital images with with a Sony DSC-R1 digital camera, tripod-mounted. 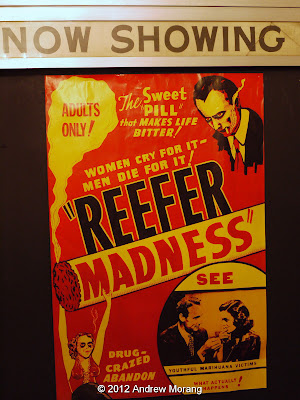 Update April 2012: Westside is holding stage productions in the Strand and a movie program has begun. The movies are projected from a digital projector, not film as in the old days, but a 16mm projector is available if ever needed. Here is a poster from the famous (infamous?) Reefer Madness.
Posted by Kodachromeguy at 01:31

We left the Strand That December day 1953 because my uncle felt uneasy . We were mad because the movie wasn’t over but later learned about the tornado. I was 5 years old and didn’t realize at the time .