Lake Washington is a quiet little town on the banks of a lake of the same name, about 20 minutes south of Greenville just west of Hwy. 1. The crescent-shaped oxbow lake is a peaceful, bucolic setting, where cormorants and anhingas sit on branches of cypress trees, and ducks quack in the distance. Drive slowly on Eastside Lake Washington Road past modest one-story houses, and you come across this impossibly grand Italianate mansion sitting on an equally grand lawn. What kind of wealth was there once in the Delta to allow this kind of extravagance? What were the original owners thinking in 1856? 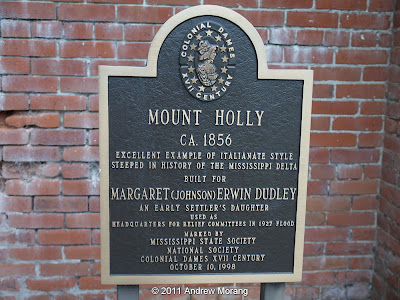 MS Preservation wrote about the history of Mt Holly; recommended reading, as are all the interesting posts dealing with Mississippi's architecture and history. 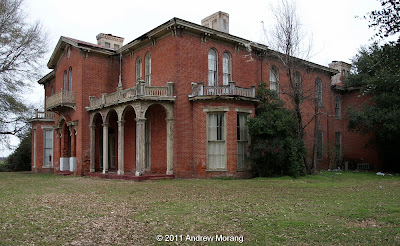 At first glance, the structure appears to be in reasonably good condition. But look more closely, and you see that it is deteriorating badly. Some of the roof is intact, but trim around the soffits is rotting, and some parts of the roof are failing. 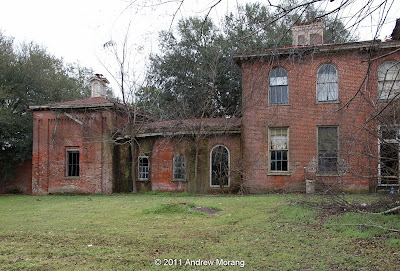 Walk around to the back, and you see broken windows and decay. A gent I met a few houses to the south said someone started repair work a few months ago, and indeed, there is a commercial work-foreman's trailer parked on the front lawn. But the trailer has been vandalized, and little work appears to have been done in many months. Previous owners used the mansion as a bed and breakfast, and the rear section of the house has a modern kitchen and redecorated rooms. They are now seedy, but at least this was a going concern in the late 1990s or early-2000s. 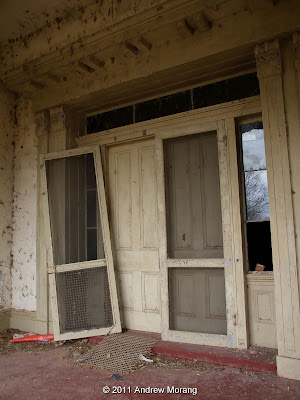 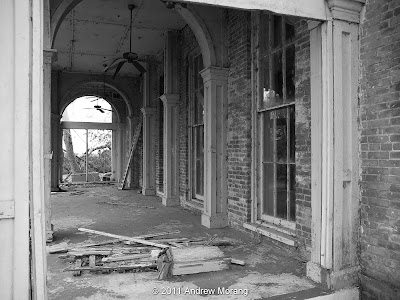 The front and side porches show the effects of years of neglect. 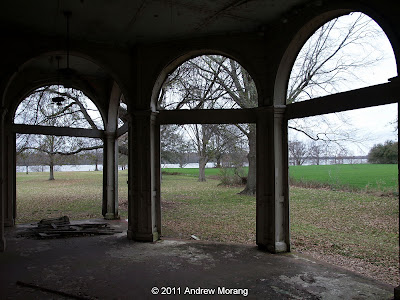 This porch, on the north side of the house, would have been an inviting place to laze away a hot summer afternoon in the pre-air conditioning era. 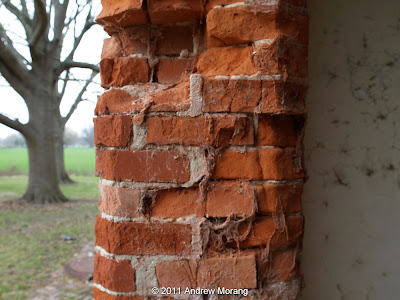 As pointed out in the MS Preservation blog, many sections of brick are crumbling. Areas were repointed with modern concrete rather than soft mortar, which would have matched the mortar used in the 1800s. I thought anyone buying a historic house would know enough to not use the wrong mortar, but apparently some people are really stupid. 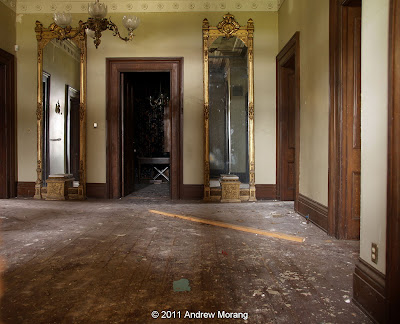 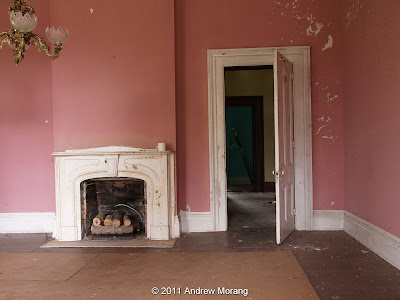 The drawing rooms were elegant and even today do not look too bad. The windows are intact so far, but vandalism will take a toll if the present owners don't secure the property. 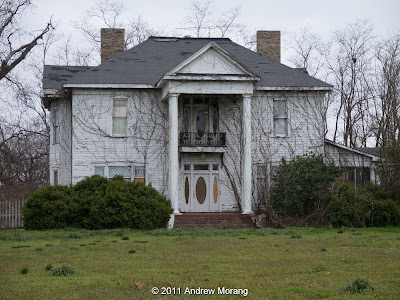 The Susie B. Law home is another fine mansion only a short distance south of Mount Holly. A reader commented that it was built in 1902 for Sidney Law and may have been ordered from Sears, Roebuck & Company (yes, they sold very fine kit homes for decades - why don't we do this now?). I don't know the recent history of this handsome wood house, but the weeds are taking over and it looks unoccupied. Please see this post for a 2014 update on the Law House.
See this post for some 2014 black&white film photographs.

Not far south in Chatham is Roy's Store, still thriving, and a fun place to visit.
Also see the Preservation in Mississippi article on Mount Holly.

All photographs taken with an Olympus E-330 digital camera, tripod-mounted, with the Olympus 14-54 mm f/2.8 lens.

UPDATE June 18, 2015: Mount Holly burned early in the morning on June 17, 2015. The damage is overwhelming. The Lakeport Plantation blog posted photographs of the destruction. I am saddened to see another piece of our heritage so badly damaged that it is unlikely to ever be restored.
Posted by Kodachromeguy at 09:56

The white house is the Law House--built in 1902 by/for Sidney Law. It was ordered from a Sears & Roebuck catalog according to Images of America, Washington County, Mississippi.
The home in better days -- http://www.jgwchpc.com/sites6/page06.html

This is how the Law House looked like in last september... I was driving along that road and to stop to have a look around... Beautiful place, beautiful mansion !
Do you know who it belongs to now ?

I photographed the Law House on November 11, 2009 and it was nearly overgrown with kudzu covering the entire front of the home. Your photo says it was taken in 2011 so I'm curious if someone has made attempts to preserve it? My photo can be seen at my flicker page infinity_photos

Hi, I spoke to you in Hollandale while u took photos of town. Last Nov. movie "Haunted", Director Victor Salva was shot here. My husband built the indoor set in Greenville for the indoor shots. Hoping to have film studio in Greenville per film maker Don FauntLeRoy. Ppl try to revitalize but is hard.

We stopped at the house yesterday and the structure was almost unrecognizable due to the unbelievable top to bottom coverage of vines, although they didn't appear to me to be kudzu. The house is open on the south? side and needs to be secured. I'm afraid that it is past salvation.

My stepmother grew up in this Mt. Holly home and she and my father were married here in the late 1990's. Lots of interesting stories and history. There was still a grand piano sitting in one of the rooms then. Unfortunately, there's not a market for the home and few who can afford to keep it up. Not sure who owns it now. I think it was donated.

Law home is gone. I went inside a couple months ago and the entire kitchen floor and ceiling was caved in..it's so rotten the upstairs isn't safe for fear of falling through. Sad but true..it can't be repaired. Mount Holly was repairable but recent drunk teenagers looked to taken a toll on it. The mirrors in the above picture were smashed, along with all of the sinks, staircase banister, the room to the left right before the kitchen when walking from the front of the house, the one with the large glass window overlooking the backyard, the entire window was smashed exposing the inside to the outside. The chandeliers were smashed except for one. I was extremely upset to see such disrespect for historical property..i hope someone renovates it before it is too late.

So sad. I would rather see them demolished and the woodwork/parts reused than to see them crumble away.

Does anyone have any inside pictures of mt holly. Other than the ones in the article. Very sad to see so something to have been around so long let fall to the ground.

It's a shame people can't leave theses old houses along. People now days don't have any respect for anything !

It belongs to relatives of the original owner.

Mt. Holly is fully engulfed in flames this morning.

What happened?? Please tell me it wasnt arson... It made me so sad to read that comment about it being vandalized and the mirrors and chandeliers being smashed, and the windows... exposing the elements. Its so sick and disrespectful to distroy something that doesnt belong to them, i really hope karma gives them what they deserve.

The last I heard was they think it was arson, but are looking into it...WHO would do such a thing?
I hope it wasn't insurance....

It's mighty ironic that the current owner is an attorney from another state I will not name, and he is already dealing with legal matters that prove his involvement in other real estate scandals.

Please do name the state and the owner. This blog shows the world with all its warts and failings. We do not gloss over anything.

Yes, just google the former mayor of Kemah, and you will see that he's had quite a time with interesting real estate ventures, and been in lots of hot water for it, too.

What's the address to the law house

I believe the side-road running beside the Law residence (aka 'The House of Romance', aka 'The Drawnback House') is 'Suzie B. Law Road'. The main road is something like 'Lake Washington Road'

Yep! Last I red on Kingfish's Jackson Jambalaya, the City of Clinton, Mississippi, was suing him for a BUNCH of code violations, pertaining to buildings he owns/owned in the historic Downtown. Mississippians are good at litigation, so THIS TIME, he's in serious trouble, IMHO.