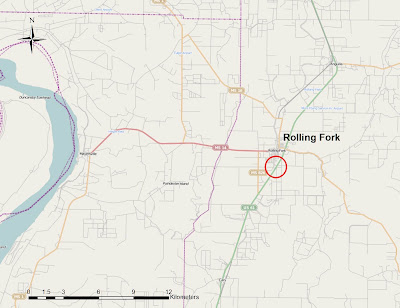 For decades, drivers on Mississippi Hwy 61 drove past a long, handsome red barn south of Rolling Fork, Mississippi. Although long deserted, it stood as a well-known local landmark. On Friday, April 29, 2011, strong winds caused part of the south wall to buckle, pulling down a big piece of the roof. The two photographs below were taken in 2007, but even then, sections of the roof were broken. 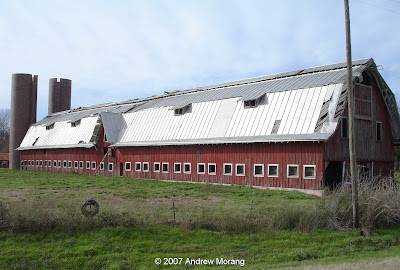 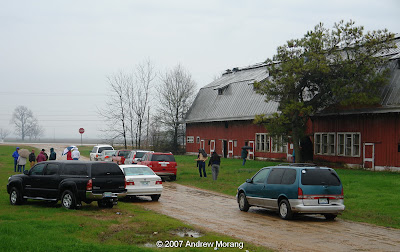 According to the Vicksburg Post (1 May, 2011), the barn was built in 1918 by the Graft family. The Department of Defense bought the barn in 2009 or 2010 as part of a 33-acre land purchase. The project was to include an educational center focusing on wildlife and environment, to be called the Holt Collier Interpretative and Education Center. Sadly, the Corps of Engineers did not have authority to do any maintenance or repairs to the barn, and the ravages of rain and time have taken their toll. With recent suspension in non-defense discretionary funding, it is unlikely that any work will be done to restore the barn.

You can see some interior photographs of the wood roof in the Mississippi Preservation blog.
Posted by Kodachromeguy at 21:19

My dad, Guy Drew, was a Greenville Mississippi CPA and in the 1950s, one of his clients was the Graft family in Rolling Fork MS. Many times during my childhood, Dad and I would drive down to Rolling Fork, park on the north side of the barn, enter the office, located on the west side of the central hallway, where Dad would proceed to work on the plantation accounting records. The elder Mr. Bogart Graft had an old home atop a small mound that was located slightly northwest of the barn. Bogart Jr. lived on Deer Creek Drive, first home east of US 61. Bogart Jr. was into bow/arrow hunting and boating. --Dan Drew (danfdrew@msn.com)

Thank you for the recollections. I recall seeing an Indian mound northwest of the barn in 2007, but I think it had no house remains on top. Were there two mounds in the area?

BO and his wife had a home in heber springs arkansas by greers ferry lake if i am putting this together right.just started doing a search looking for the grafts.my father worked for them.If i am at the right place,Mr BO senior hunted with Ben Pearson,which i have a signed bow from him.anyway if anyone is interested give me a shout.darth_vader302004@yahoo.com

I am interested in having my wedding renewal here, So I am not sure who I need to get a hold of to find out this information. Can someone please let me know!! 803 508 0210 or betruetothyself2008@gmail.com

The red barn partly collapsed and the remains have been torn down. The site may not be of much interest for your renewal. Sorry.