Dear Readers, this is the first of five posts about railways in Greece.

The Piraeus, Athens and Peloponnese Railways or SPAP (in Greek: Σιδηρόδρομοι Πειραιώς-Αθηνών-Πελοποννήσου or Σ.Π.Α.Π.) was founded in 1882 to connect the port of Piraeus (Πειραιεύς) with Athens and the Peloponnese region of southern Greece. The late-1800s was the era of great railroad building throughout the world. Greece, at that time a poor nation with isolated market towns and limited roads, hoped to support economic development by building a rail system. The Peloponnese line reached Corinth in 1885 and Patras in 1887. SPAP was absorbed by the Hellenic State Railways in 1962, now called OSE (Greek: Οργανισμός Σιδηροδρόμων Ελλάδος or Ο.Σ.Ε.). The Peloponnese rail was narrow-gauge 1,000 mm (3 ft 3 ⅜ in.), in contrast to the continental-standard 1,435 mm (4 ft 8 ½ in.) used in most of mainland Greece. The line from Piraeus to Corinth was 99 km long. In the 1890s, it was the fastest way to make the journey, the alternate being a steamship trip. 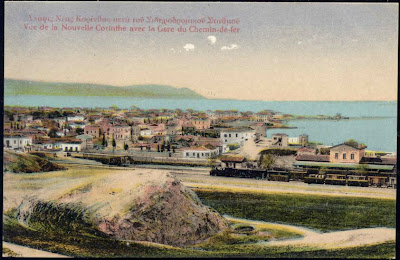 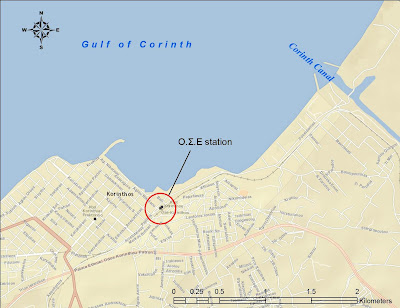 The postcard, from Wikipedia, shows the old station in Corinth (or Korinthos) in 1910. The map shows the location (background street map from ESRI maps and data). During the mid-20th century, tourists arriving from Italy typically took a ferry boat from one of the Italian Adriatic ports to the city of Patras, where they disembarked. Then the SPAP train took them on a leisurely day-long ride to the old central rail station in Athens. Once the modern highway was built in the 1960s, many travelers took diesel buses instead. As a result, they rushed past the charming little market towns clustered along the shore of the Gulf of Corinth and missed the train experience. 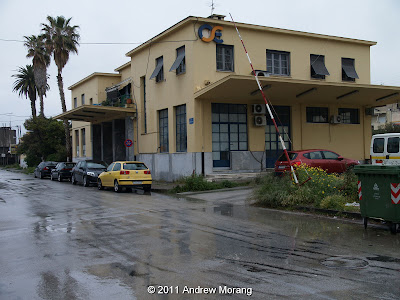 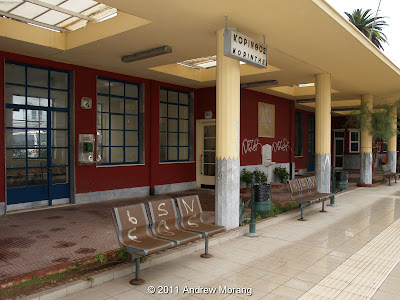 Today, the rail station in Corinth on Dimokratias Street stands semi-abandoned. As of 2005, the modern suburban rail connects the Athens Elefthérios Venizélos (Ελευθέριος Βενιζέλος) International Airport with Corinth and, now continues further west to the town of Kiato. Eventually, the modern rail will extend all the way to Patras, and the rest of the historic 1-m gauge train will be discontinued. As part of its financial restructuring, the Greek government plans to privatize the Ο.Σ.Ε., but I do not know if there are any potential buyers. 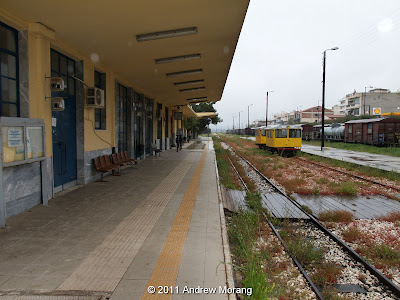 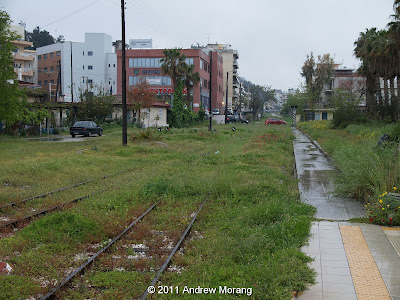 This station looks like it is late-1940s or 1950s-vintage. Corinth was badly damaged by an earthquake in 1928, and possibly that eventually necessitated a new station. Another hypothesis: The railroad suffered extensive damage during the second World War, and maybe the original station was damaged. 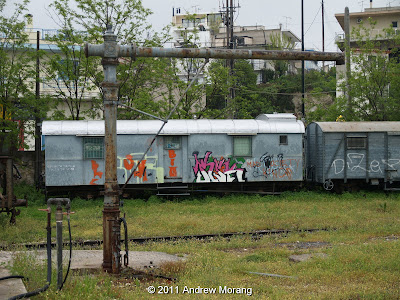 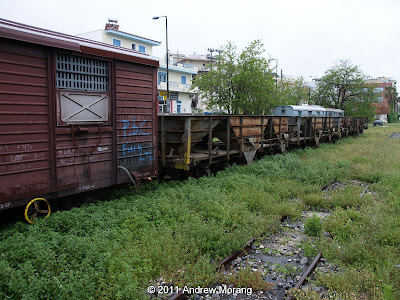 In 2011, the rail yard was pretty quiet, with abandoned rolling stock sitting on sidings. The arm sticking out in front of a graffiti-covered box car is an old water tap for filling the tenders of steam locomotives. 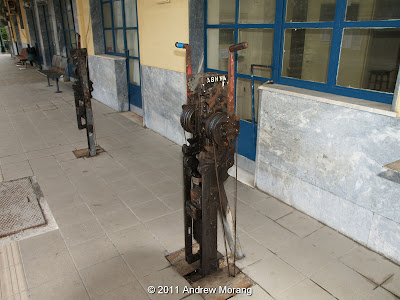 Finally, these mechanical control units actuated track switches. Oddly, they were on the platform in front of the station waiting room. Wouldn't tourists be tempted to fiddle with them? It's strange they had never been electrified or adapted to control from a central control room. I will show more examples of the railroad in a future blog entry.

All photographs taken with an Olympus E-330 digital camera using the Olympus 14-54mm f/2.8 lens, tripod-mounted.
Posted by Kodachromeguy at 18:12

Such a shame the metre guage railways of the Pelopenese have been abandoned. For sure there is a need for an upgraded railway Patras - Athens but there could be an opportunity to run a tourist railway like in parts of Switzerland