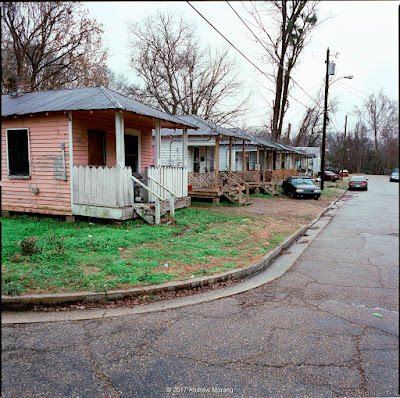 Arcadia place is a dead-end street a few blocks west of Drummond Street. It features a set of almost-identical shotgun houses. I have photographed here before and occasionally walk by to see if they have changed. They are an excellent example of modest early-20th century architecture, low-cost homes built for workers. Much has been written about the American shotgun house, but I am not an architect or sociologist and am unfamiliar with the literature. These little houses are disappearing from the South, and I try to photograph them when I can. I previously wrote about these houses in 2010. This 2017 photograph is an Ektar 25 frame from a Hasselblad camera.
The little houses in 2003 and 2004 looked about the same as now, but the porches were open then. These were film frames taken with a 4×5" Tachihara camera and a 6×9 Fujifilm GW690II medium format camera. 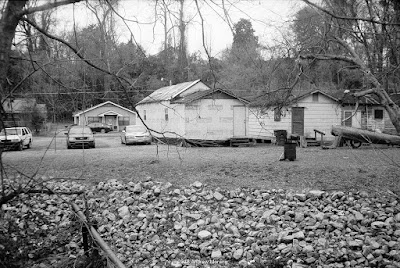 This is the view from the east across Stouts Bayou (below the rip rap in the foreground). I do not know if the Bayou ever rises enough to flood the yard and the street beyond. The houses are up about 2 ft on their post and beam foundations, so they are probably safe from flooding.
Posted by Kodachromeguy at 08:00