Vicksburg's Crawford Street United Methodist Church* extends over a large portion of the block between Crawford and South Streets in Vicksburg. A 3-story tall annex faced South Street. I think this annex was built in the early 20th century and was part of the Vicksburg Sanitarium (Street's Sanitarium, and later, the Sydney Building**. According to the Mississippi Department of Archives and History Historic Resources Inventory, in 1957 the "old building became Sydney House, a nursing home and apartments for the elderly. Sydney House closed in 1993. The general form and some exterior details of the original house were still visible on the facade of the building. The building burned in 1995 and was subsequently demolished. The Crawford Street UMC bought the property and the two buildings to the south (in the photograph above).

For many years, the lower floor of the annex housed a food bank, while the upper two floors were empty, as far as I know, through the early-2000s. A friend who volunteered at the food bank mentioned something about a kindergarten being in the upper floors at one time. 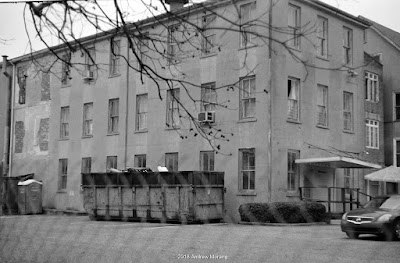 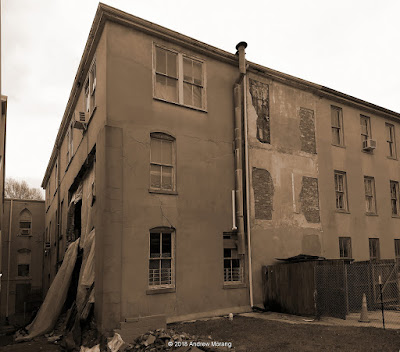 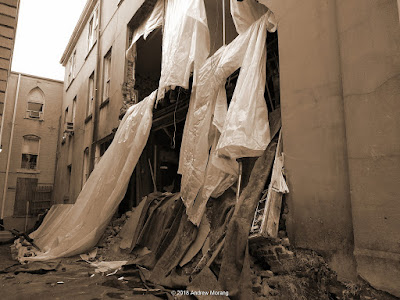 Sometime in 2018, the back wall of the annex building collapsed. While bicycling by in December, I saw a large backhoe and dumpsters. It was obvious that the old buildings were about to be demolished. 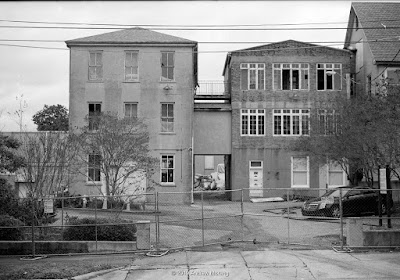 The workers started with the collapsed wall to the rear (the north side). Notice the interesting bridge between the two buildings.
Once the tractor started working, the building came down quickly. I do not know if any of the old joists and timbers could be reused. I thought only the building to the left would be removed, but soon the second unit came down, as well. Now a field of gravel and bits of broken brick marks the footprint of the two buildings. I do not know if the area will be paved to expand the parking lot.
The handsome Spanish Mission Revival building at 819 South Street, across the street from the annex parking lot, now houses the City of Vicksburg Planning Department. Built in 1916, this was the former Carnegie Library***. It is a handsome building that has been well-preserved by the City. Good job!

* The Crawford Street UMC has a distinguished history. According to the Millsaps College web page:


Organized in 1834, Crawford Street Methodist Church in Vicksburg, holds a unique position in the history of Methodism in Mississippi as well as the history of Vicksburg. On the church grounds is the burial site of Tobias Gibson (1776-1804) , first missionary circuit rider - The Father of Methodism in Mississippi - to the Mississippi Territory for the Methodist Church. Originally buried some few miles away, the monument and grave were moved to Crawford Street in 1935. Newitt Vick , on whose property Vicksburg was built, and his family were hosts to the First Methodist Conference in the Old Southwest in 1812. Openwood church where the Vicks worshipped, was to be the forerunner of the Methodist church in Vicksburg. In 1841 J. W. Vick sold the M.E.C. South the land where the present church stands. The building was dedicated in 1850, But a new structure was to be built in 1899. It burned on Palm Sunday, 1925. After temporary arrangements a new building was constructed in 1955.


**  The Vicksburg Sanitarium, now gone, was built around 1910. From the National Register listing:


The Vicksburg Sanitarium. A four-story, stuccoed, flat-roofed building, facing north, which was built incorporating an 1830s residence. A modillioned metal cornice is between the thud and fourth floors, and a plain cornice is at the roof. There are five bays in the main part of the building: four, two-over-two double-hung sash with stone lintels and sills and a non-historic entry. There is a stuccoe done-story portico supported by square stuccoed columns with a heavy balustrade on its roof. The center bay on the second floor is slightly recessed and is a non-historic door with original sidelights and transom. The recess is flanked by Doric pilasters supporting a denticulated entablature. There are several additions to the building. Ca. 1830s, 1910.


The Old Vicksburg Public Library is architecturally significant in the context of public/governmental architecture in Vicksburg, Mississippi. It exhibits an outstanding design that represents the highlight of development during Vicksburg!s boom period. It is significant as the only public/governmental building in Vicksburg constructed in the Mission Revival style. While many residential buildings in Vicksburg were influenced by this style, the library is the only non-residential Mission Revival and is the largest building constructed in the style. Please refer to the contextual statement for more information about the architecture of Vicksburg.

In 1910 the Vicksburg Library Association decided to contact Andrew Carnegie to ask if he would help the Association build a new library. A library of sorts had been established on the third floor of the new City Hall in 1903, but the Association needed a larger building.

The Carnegie Foundation agreed to build a library building if the community would provide the ground for the building and agree to support the library once .it was established. The Civic League raised $5,000, of which $4,000 was used to purchase the lot and the remainder was used to purchase books and supplies. The planswere designed by Edward L. Tilton, an architect commissioned by the Foundation in New York City. The Library was completed in February 1916 at a cost of $28,000, of which $25,000 was provided by the Carnegie Foundation.

The black and white photographs are from Leica cameras with Fuji Acros or Kodak BW400CN films.
Posted by Kodachromeguy at 08:00

Outstanding Stuff Dear, Keep it Up. Peoples Need To Visit this Blog.

Thank you for the kind comments. There is so much to see here in Vicksburg and the surrounding area.