Monroe, formerly Fort Miro and now the seat of Ouachita Parish, is the "big city" of north central Louisiana. The family and I used to attend theater productions at the Monroe Civic Center and have flown out of MLU airport, but otherwise have not spent much time there. Readers may remember that in 2020, I followed part of historic US 80 through the northern part of the city (it was not too exciting).

A Virginia friend asked about someplace to explore, and I suggested Monroe. We drove there on a sunny warm day and headed to the Ouachita River at the historic city core. 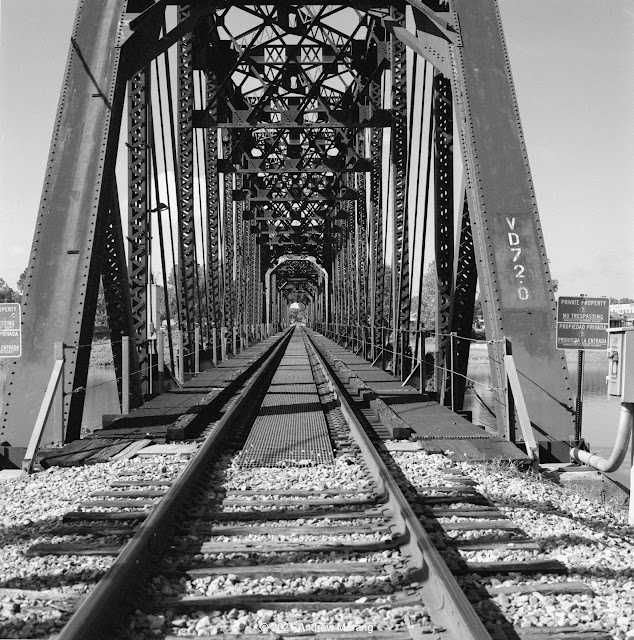 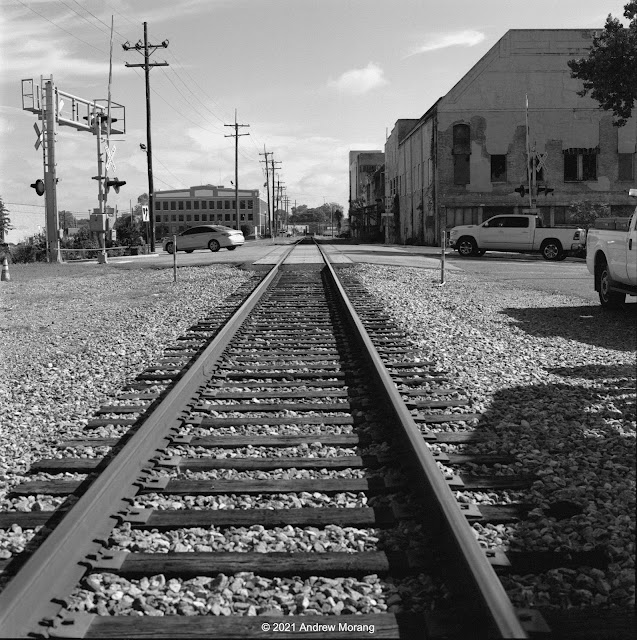 The railroad tracks come right through the business district and cross the Ouachita River on a beautiful old pivot bridge. Some railroad maintenance workers let us enter the railroad property and take photographs. They said the bridge still occasionally pivoted when a barge was passing on the river. The Ouachita is a Federal Navigation Project, meaning to is maintained by the US Army Corps of Engineers:

"The Ouachita-Black Rivers Navigation Project provides dependable year-round commercial navigation from the mouth of the Black River to Camden, Arkansas, a distance of approximately 330 river miles." (from the Ouachita River Valley Association)

I showed my Hasselblad to one of the railroad workers, and he was fascinated to look through the waist-level finder and see that the view was reversed left to right. Maybe I made a film convert. 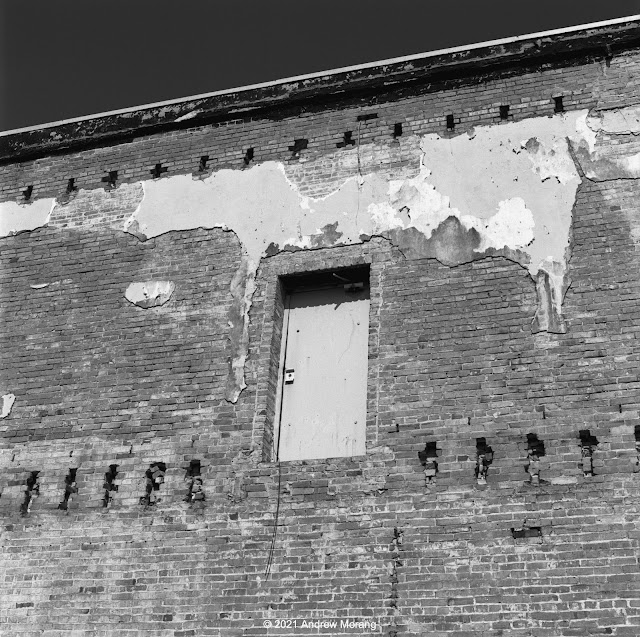 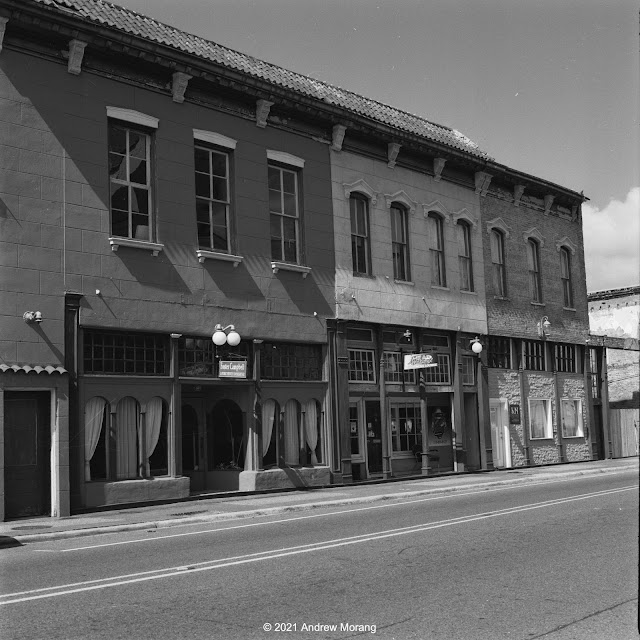 South Grand Street may have once been the main commercial strip paralleling the river. The area looks reasonably clean and well-maintained. Empty lots show where old commercial buildings have been demolished. But the standing buildings have businesses or occupation. 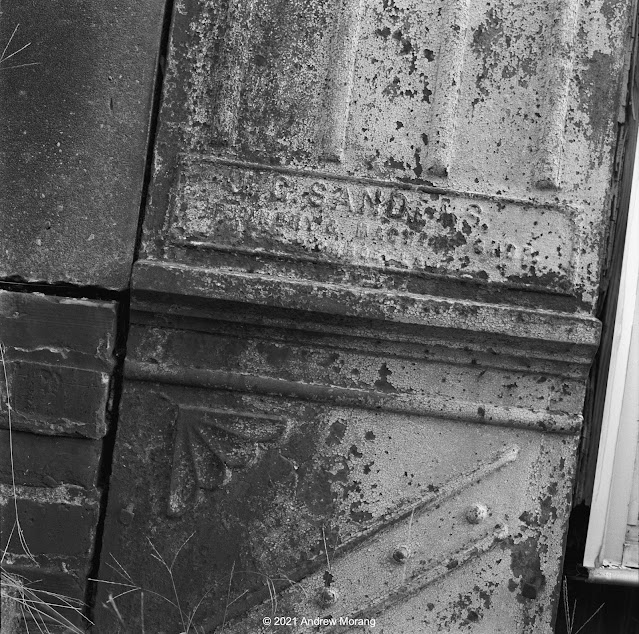 Many of these late-1800s or early-20th century shops and buildings used cast-iron frames and supports on the facade. This was a common construction method, and you still see millions of buildings around the country with the cast iron beams. Any old-town downtown will have these buildings. The big advantage of cast iron was that the vertical supports could be much more slender than masonry supports of similar bearing capacity. 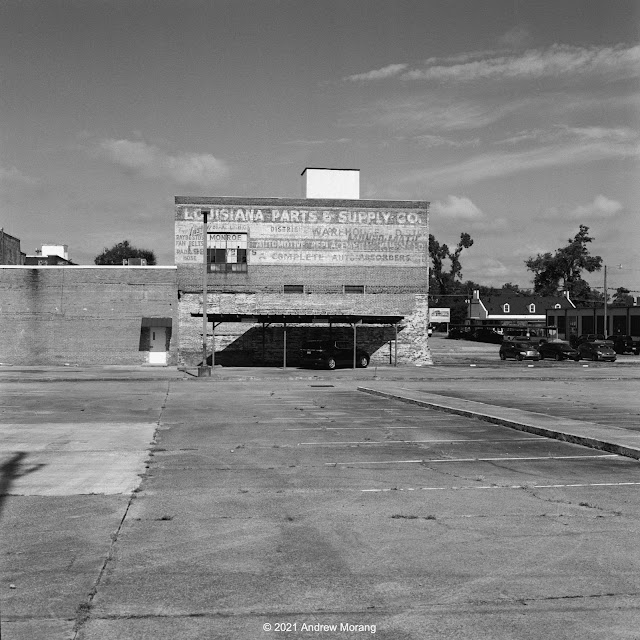 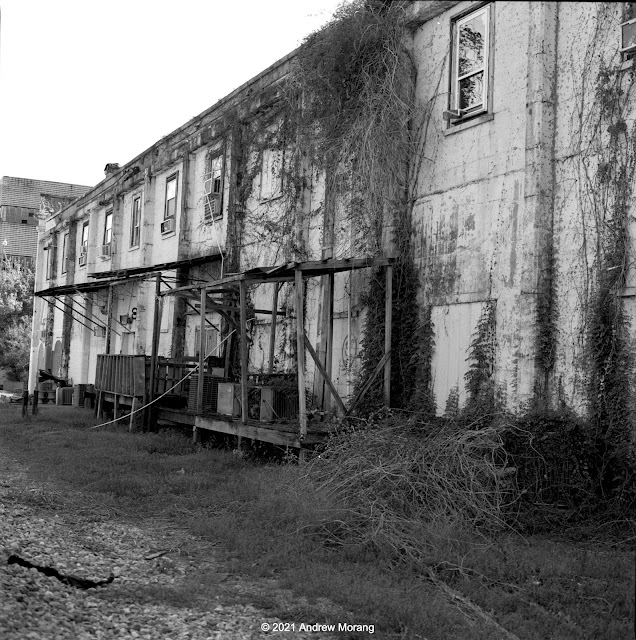 The side of buildings that faced the railroad were typically a bit rough or industrial. You definitely see this when you take the Amtrak through the Northeast Corridor.

These photographs are from Kodak Tri-X 400 film, developed by Northeast Photographic in Bath, Maine. I exposed them at EI=320, all hand-held. The light was bright and glarey.

This ends our short tour of the riverfront region of Monroe. Standby for Part 2.

I was just talking to Rand last night about your work! We took a detour through downtown Monroe once, and it does hold some great buildings! I like the railroad bridge, and it is one of my favorite views on the river.