More tests of Tri-X film in Vicksburg and Jackson

With the return of my Fuji GW609II camera from repair (I broke it in Kingman, Arizona on my Route 66 tour), I wanted to check if the shutter was working properly and test if North Coast Photographic's processing of Tri-X suited my preferences for contrast and "look." The following pictures are 2400 pixels wide, so click any picture to see more details. 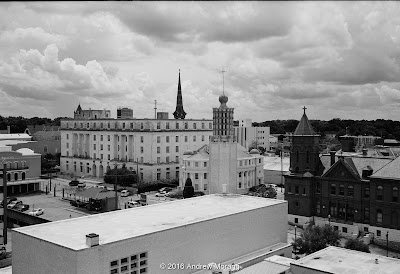 It is always nice to find a high viewpoint. This is the view looking southeast from the 10 South Rooftop Bar & Grill, which is atop the old First National Bank building at 1301 Washington Street. Most of the floors below have been converted into apartments. The big building in the distance is the WPA-era former Federal Post Office and Courthouse. For many years, Vicksburg District of the Corps of Engineers occupied part of the building. It has been empty for about 10 years and may be redeveloped. The roof in the foreground is St. Paul Catholic Church. The original St. Paul was damaged in the 1953 tornado, and this modern building replaced it. 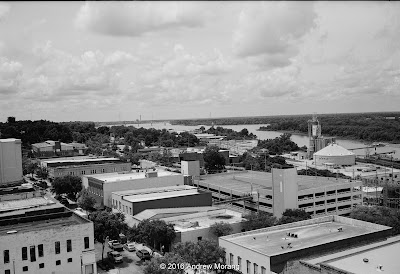 This is the view from 10 South looking southwest towards the Yazoo Canal. The canal joins the Mississippi River in the distance. The parking garage in the right center was built in the 1970s during the "redevelopment" fad, when tearing down historic architecture and replacing it with parking facilities was assumed to be the pathway to revitalizing urban downtowns. 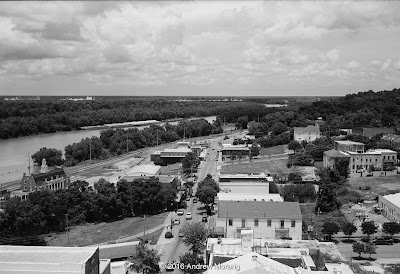 The Yazoo Canal runs north to the Port of Vicksburg. The road in the center is North Washington Street, which used to be US 61. Now, the official 61 bypasses Vicksburg east of the city. I used an orange filter on the three frames from 10 South to emphasize the cloud texture. 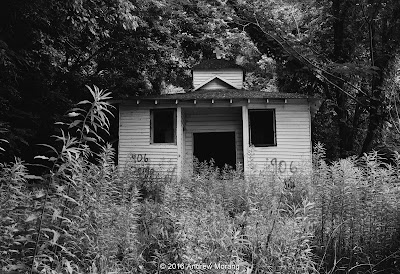 The church at 906 Yazoo Street has been abandoned for several years. The spray paint numbers mean the city engineer has condemned the structure. 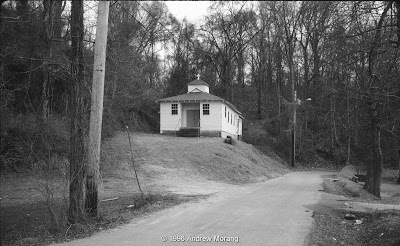 Here is the same church in 1996, when it was still active. This is a 35mm Agfa Scala film frame, taken with a Leica M3 camera. 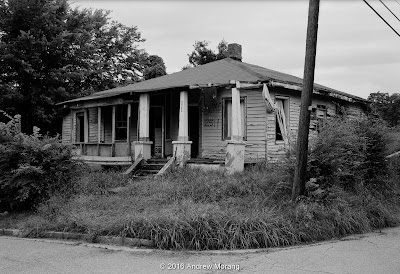 2511 Cedar Street is a condemned cottage. It is a pity; this was probably a rather nice house decades ago. 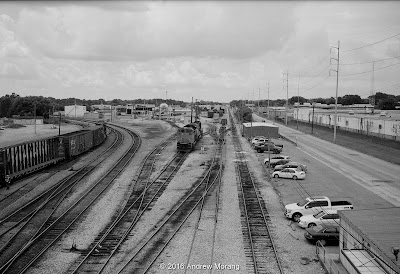 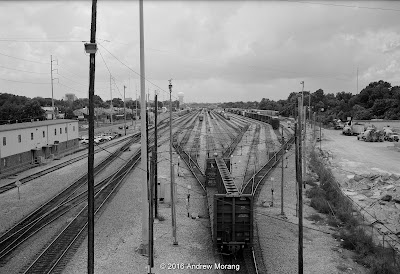 The last two frames on this roll of film are from Jackson. This is the Canadian National railroad yard photographed from the Woodrow Wilson Avenue overpass. There is a sidewalk on both sides, so you can safely stand away from the traffic. These are hand-held with a yellow filter, with exposure of 1/250 sec. at f/5.65. The amount of detail in these Tri-X frames is impressive, especially if you consider that Kodak introduced the 120 film format for their Brownie No. 2 camera in 1901. The lessons of this roll: the Fuji works correctly, but the frames are a bit too harsh and contrasty for my tastes. If we had overcast gloom, like Scotland, this would be perfect. The Clayton F76+ developer that North Coast Photographic uses does not seem quite right, so I will go back to developing future rolls myself in Kodak's HC110 developer.
Posted by Kodachromeguy at 10:00

Nice pictures from my hometown of Vicksburg, MS, atop 10 South Rooftop Bar and Grill. :) I like the "look."