My new (1960-vintage) Rolleiflex 3.5E camera with Schneider Xenotar lens came back from the repair shop, so I decided to test it one blazing hot day when I was in Jackson. I used some Kodak Panatomic-X fine-grain black and white film. 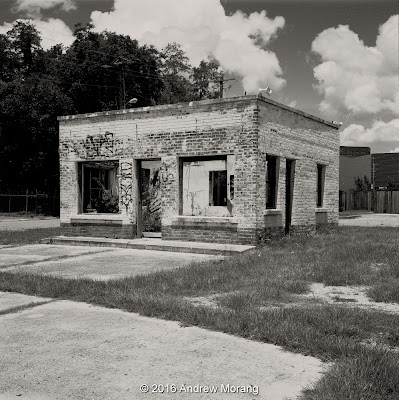 This is a former gasoline station at 100 East South Street, at the corner of South and Farish. There are still active businesses in south Jackson, but also plenty of empty buildings. 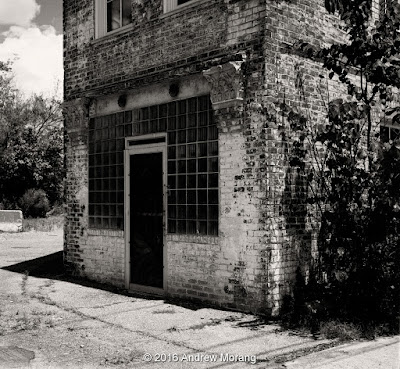 This is a historic warehouse at 300 West South Street. It is now known as the Foundry Lofts and offers modern flats for rent. 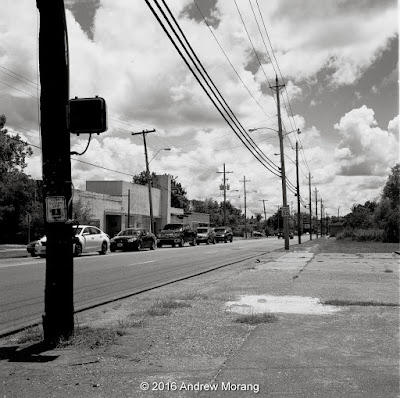 Head a couple miles north, to the intersection of West Fortification Street and Bailey Avenue, and we have a view of Bailey Avenue looking south. This is a rough part of town with many empty or crumbling buildings. 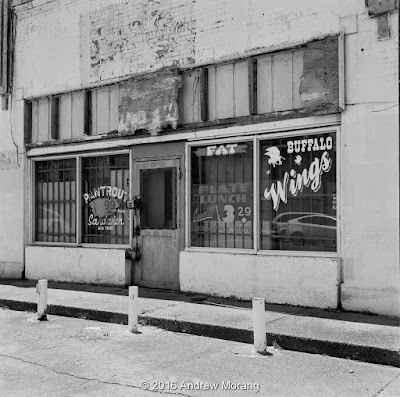 This is an example of the many closed businesses, this one at 957 Bailey. Note the window with the word "Wings." 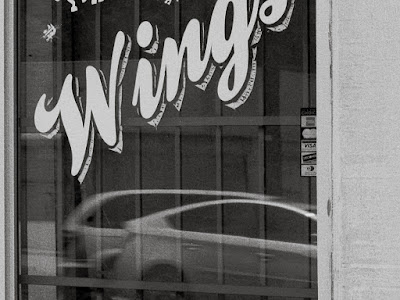 This is a crop of the full frame, with details of the credit card stickers in the windows quite legible. Considering that this Rolleiflex has a 55+-year-old lens, I am pleased. I read that Rollei tested each and every camera for resolution using film. Cameras that did not meet specification were sent back to the production line for adjustment or to have the lenses replaced. 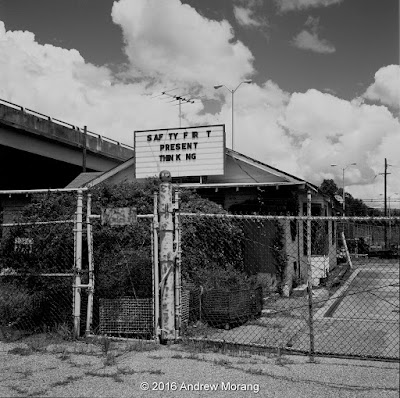 This is the entrance to the now-closed cotton seed oil mill at 1000 Mill Street. The site recently housed a pallet company, but most of the hulking complex of steel buildings and pipes has been out of operation for at least a decade. The bridge to the left carries East Fortification street. 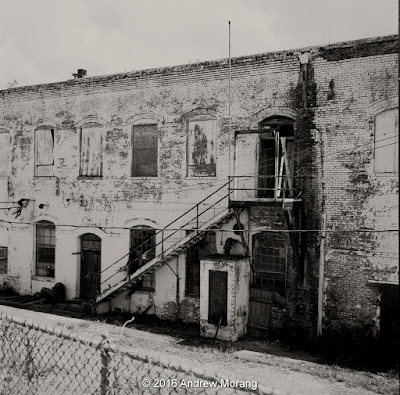 The sun was blazing and the temperature about 99°F. The pavement on East Fortification was radiating lava, and I had to be careful about traffic. 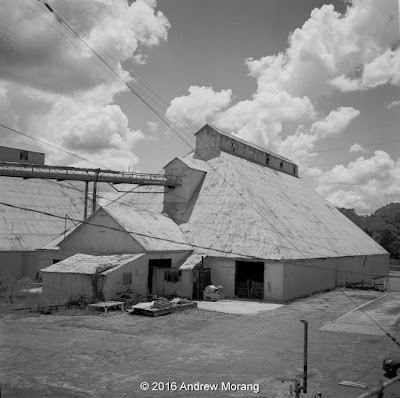 But by late afternoon, the clouds rolled in and dropped a minor amount of rain. But I was tired and headed home. For some color photos of the mill, please see this 2013 post.


Technical notes
Camera: Rolleiflex 3.5 E with 75mm f/3.5 Schneider Xenotar lens (5-element with single coating on all elements).
Film: Kodak Panatomic-X, exposed at ISO 25. It has been expired 27 years but has been frozen. Slow-speed black and white films survive for years in a freezer. After decades, cosmic rays may cause fogging on high-speed films, but this slow emulsion is still fine.
Film development: Northcoast Photographic Services developed the film in a Hostert dip and dunk system using Clayton F76+ developer. I requested N-1 development (pull 1 stop) but the results were still too contrasty and harsh. Also, the film exhibited some reticulation, meaning a rinse or other chemical was too cold. I did some contrast adjustment and toning with PhotoNinja software.
Scanning: I used a Minolta Dimage Scan Multi medium format scanner at 2850 dpi. To run the scanner requires an old computer with Windows 7 and a SCSI card. The Minolta ScanMulti software was written around 1999 for Windows 98 or NT. To keep old hardware going requires not only the device you want to use but also the appropriate cards, wiring, software, drivers, and operating system. 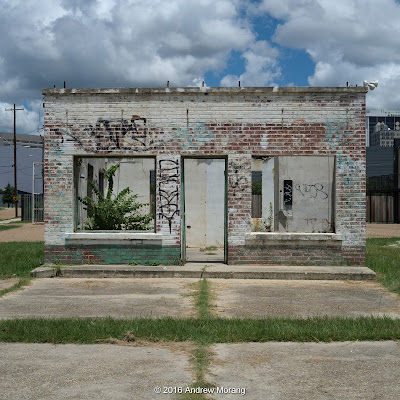 Update: To compare with traditional black and white film, here is a high-tech digital image of the former gas station on East South Street. This was from a Fuji X-E1 camera with 27mm lens.
Posted by Kodachromeguy at 10:00