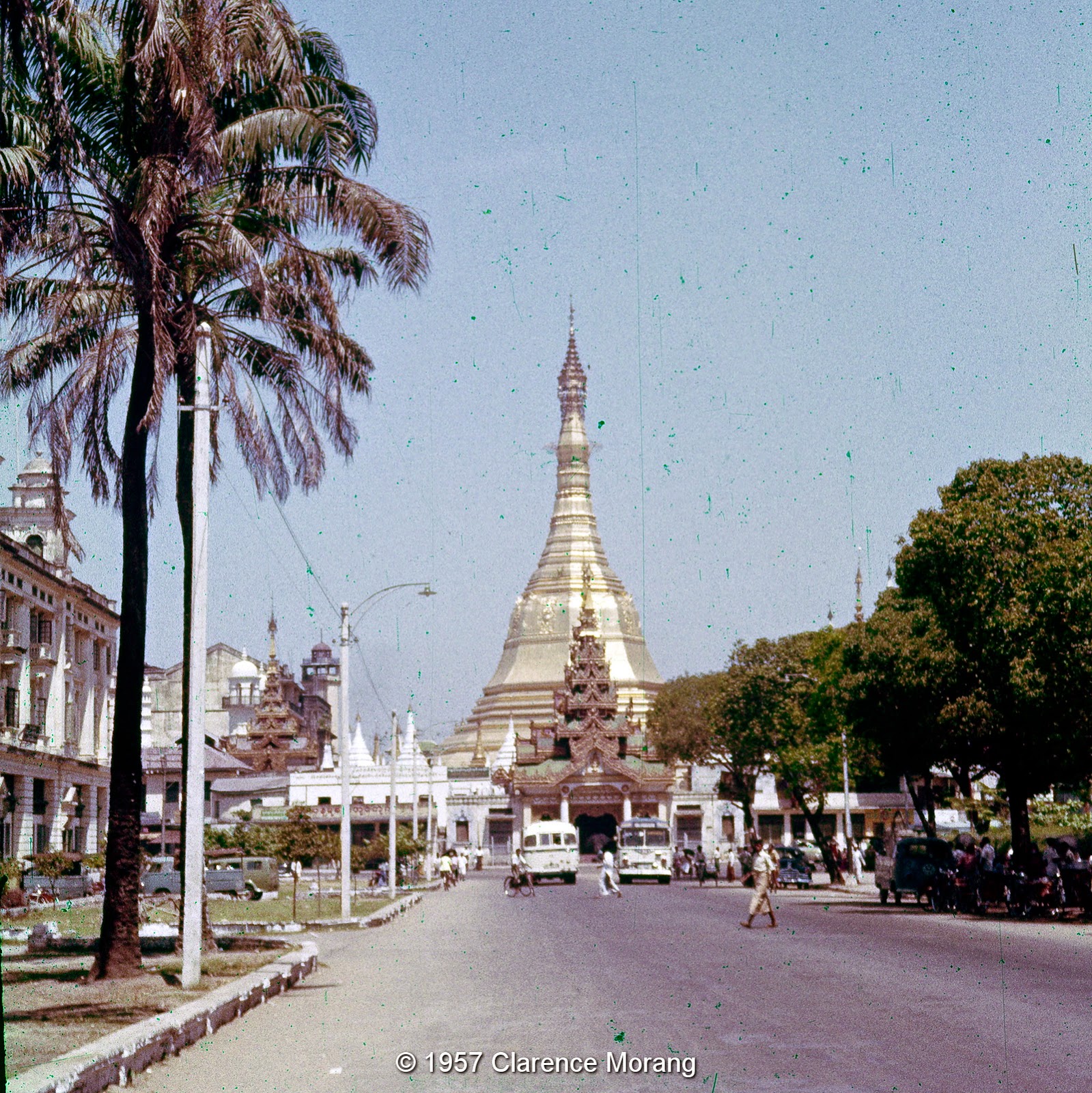 Rangoon, now officially known as Yangon, is the largest city in Burma and was the capital until the military government relocated the capital to the newly-built city of Naypyidaw in 2006. Rangoon is still the commercial and cultural center of the country and has a population of more than 5 million (some estimates are 7 million).

The British came to Burma in the early 1800s and captured the city, then known as Yangon, during the First Anglo-Burmese War (1824–26). Much of the city was destroyed by fire in 1841. After the Second Anglo-Burmese War of 1852, the British seized Yangon and began to transform it into the commercial and political hub the colony. Based on a design by an army engineer, they rebuilt the city on a modern grid pattern, with east-west and north-south streets centered on the historic Sule Pagoda. According to Wikipedia (citing various sources), "Colonial Yangon, with its spacious parks and lakes and mix of modern buildings and traditional wooden architecture, was known as "the garden city of the East." By the early 20th century, Yangon had public services and infrastructure on par with London."

The photograph above shows the Sule Pagoda in 1957, when the streets were tree-lined and had little traffic. Back then, only diplomats and Americans had cars. This is a scan from a Kodachrome slide taken with a Leica IIIC camera. The view is looking south along Sule Pagoda Road, with City Hall on the left. 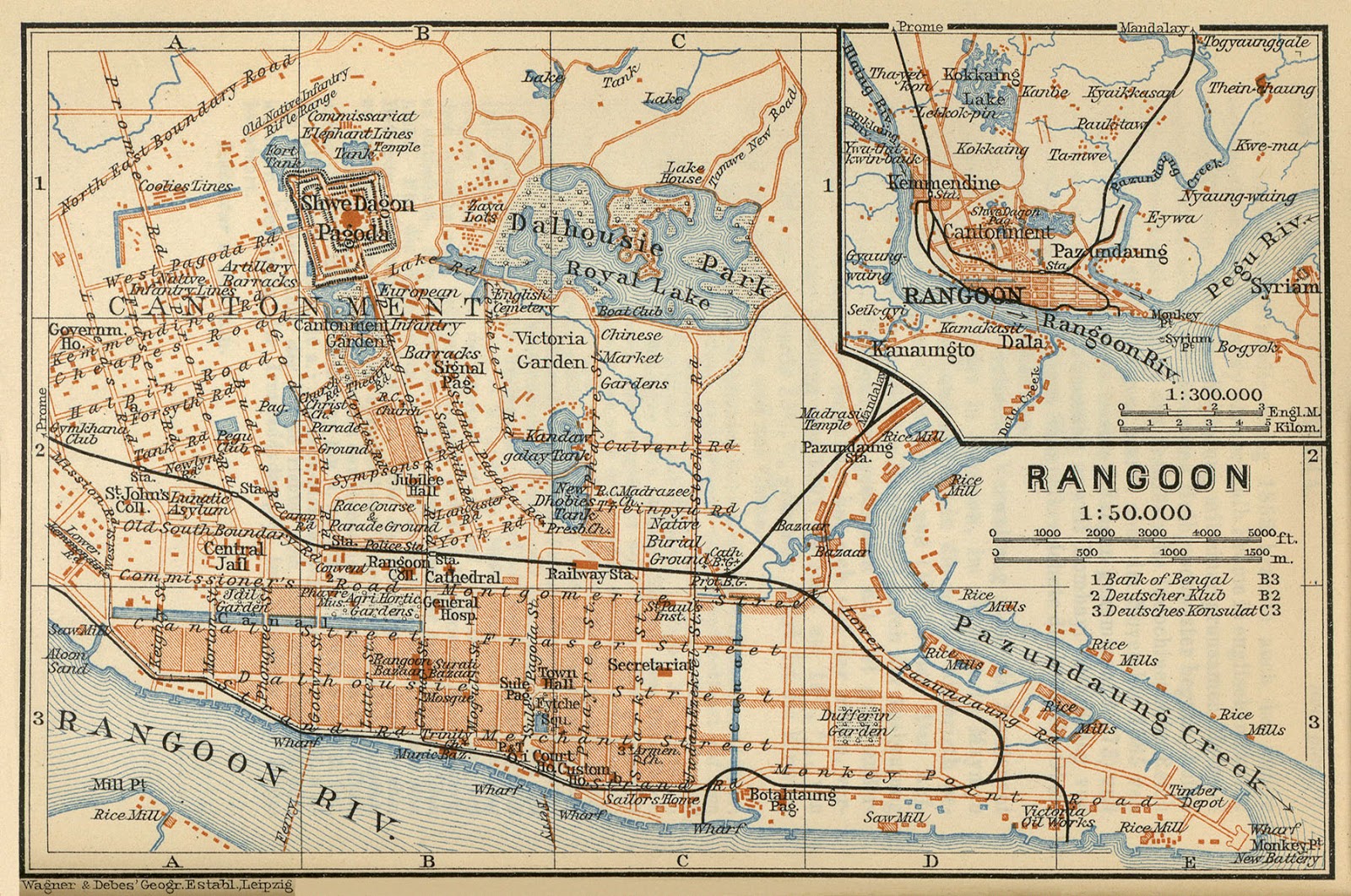 The map (from University of Texas Libraries) shows Rangoon in 1914 (click the map to enlarge it, as with all the photographs). The Shwedagon Pagoda is on the hill in the northern suburbs, while the newly laid-out city grid has the Sule Pagoda as its center origin. The thick black lines are railroads.

This is an aerial photograph from the family archives. The Shwedagon is in the center left, while the Sule Pagoda is near the bottom. The large building to its right is the huge City Hall. In 1957, Rangoon was a flat city with buildings no more then 3 or 4 floors high. I do not know why none were higher. I wonder if the lack of fire-fighting ability or undependable electric supply (meaning undependable elevators and air-conditioning) might have been reasons? 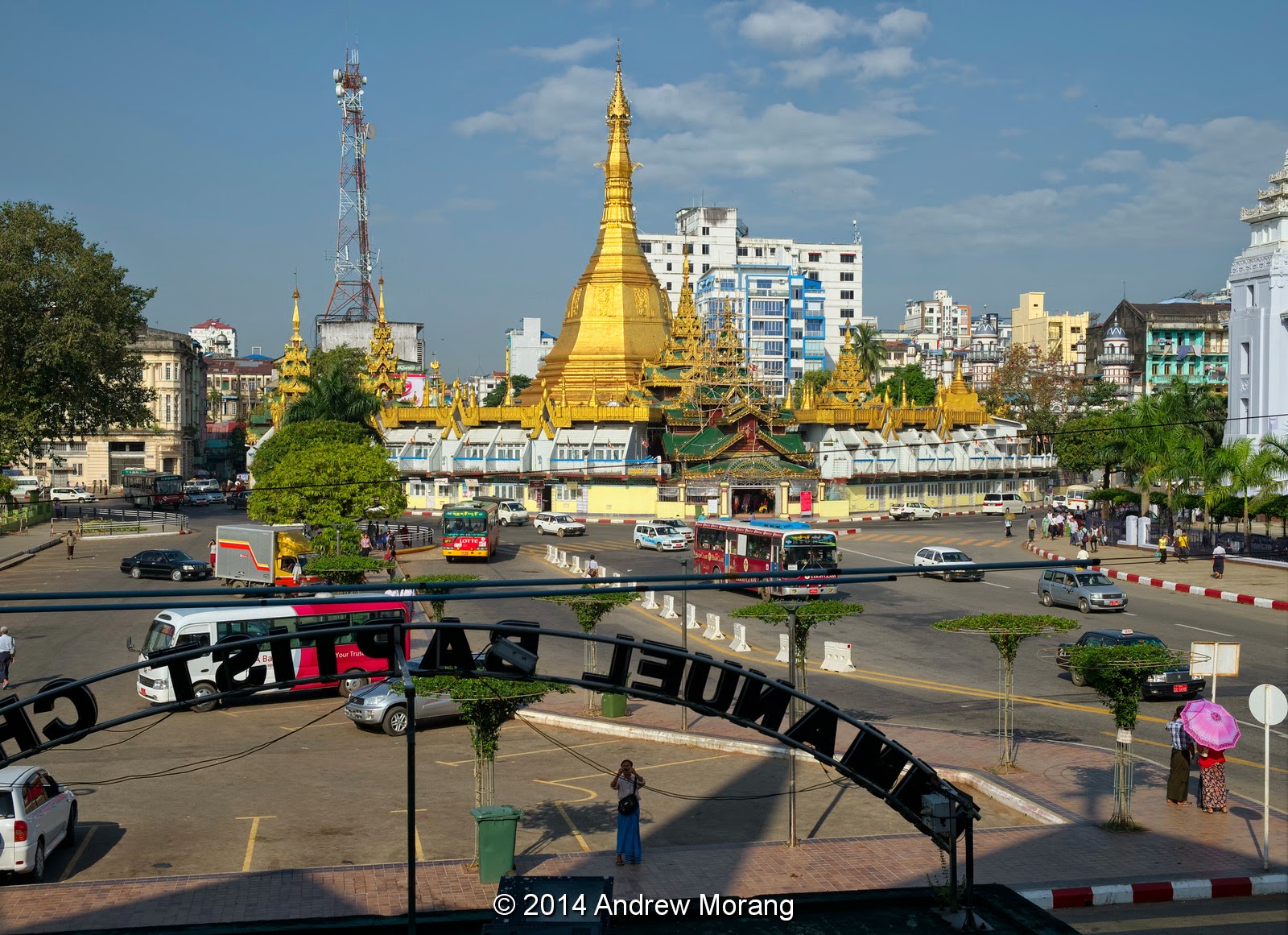 This is the Sule Pagoda today, with more traffic and some modern tall buildings in the background. The City Hall is to the right. This photograph was from the second floor of the historic Emmanuel Baptist Church. According to legend, part of the Sule may be 2,500 years old, but most of what we see is less than a century old. 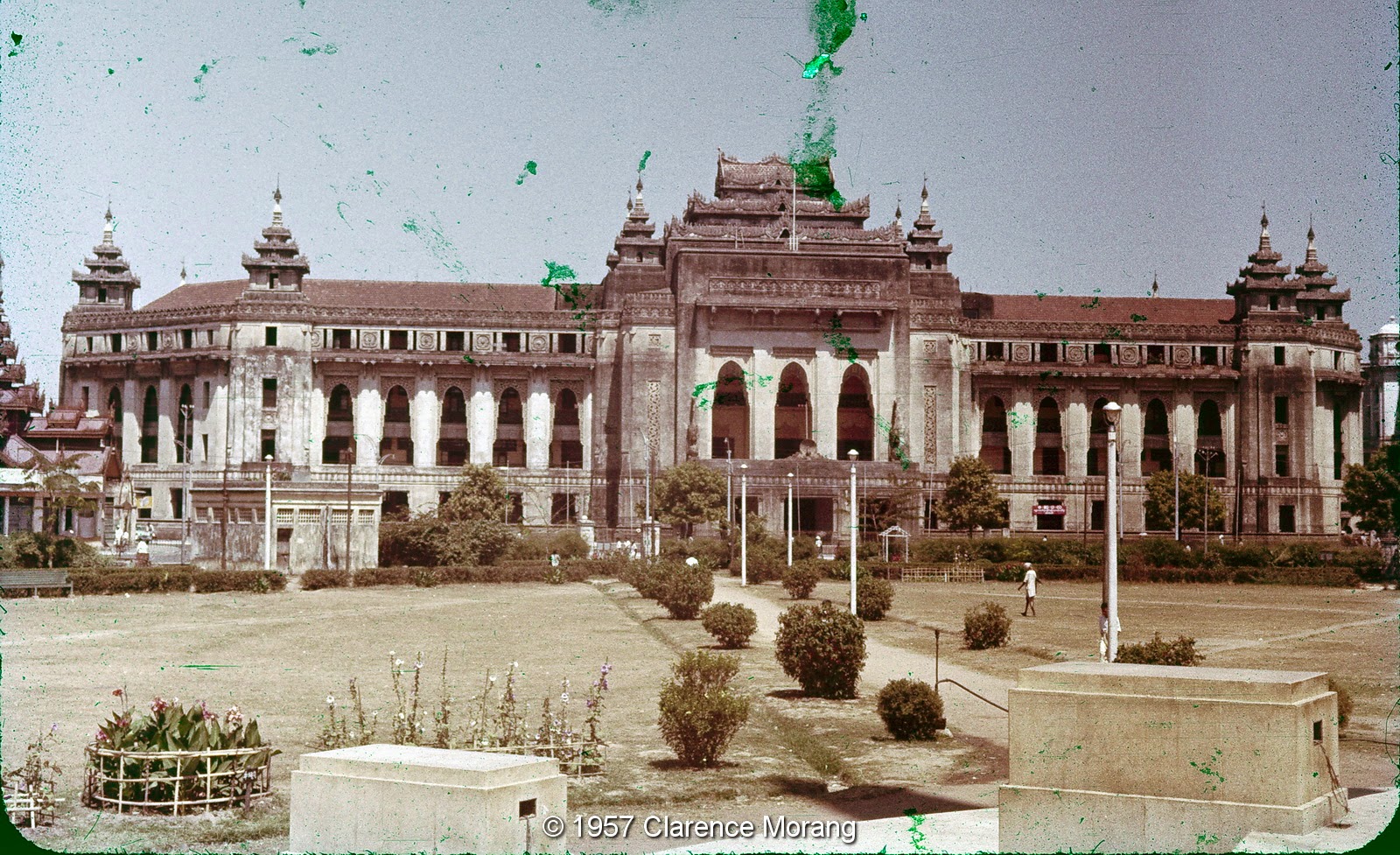 This is a 1957 photograph of the City Hall. It was built between 1926 and 1936 and was designed by Burmese architect U Tin, who was also responsible for the huge Central Railway Station. The tiered roofs are called Pyatthat, common in many Buddhist structures. The size of the City Hall and the amount it must have cost gives an idea of the importance of Rangoon to the British Empire. They assumed the empire would last and wanted to be prepared with appropriate administrative and structural infrastructure. But war was to follow in a few years, and the British fled Rangoon in early 1942 under the onslaught of the Japanese Imperial Army. The British returned in 1945, only to grant independence to Burma in 1948. 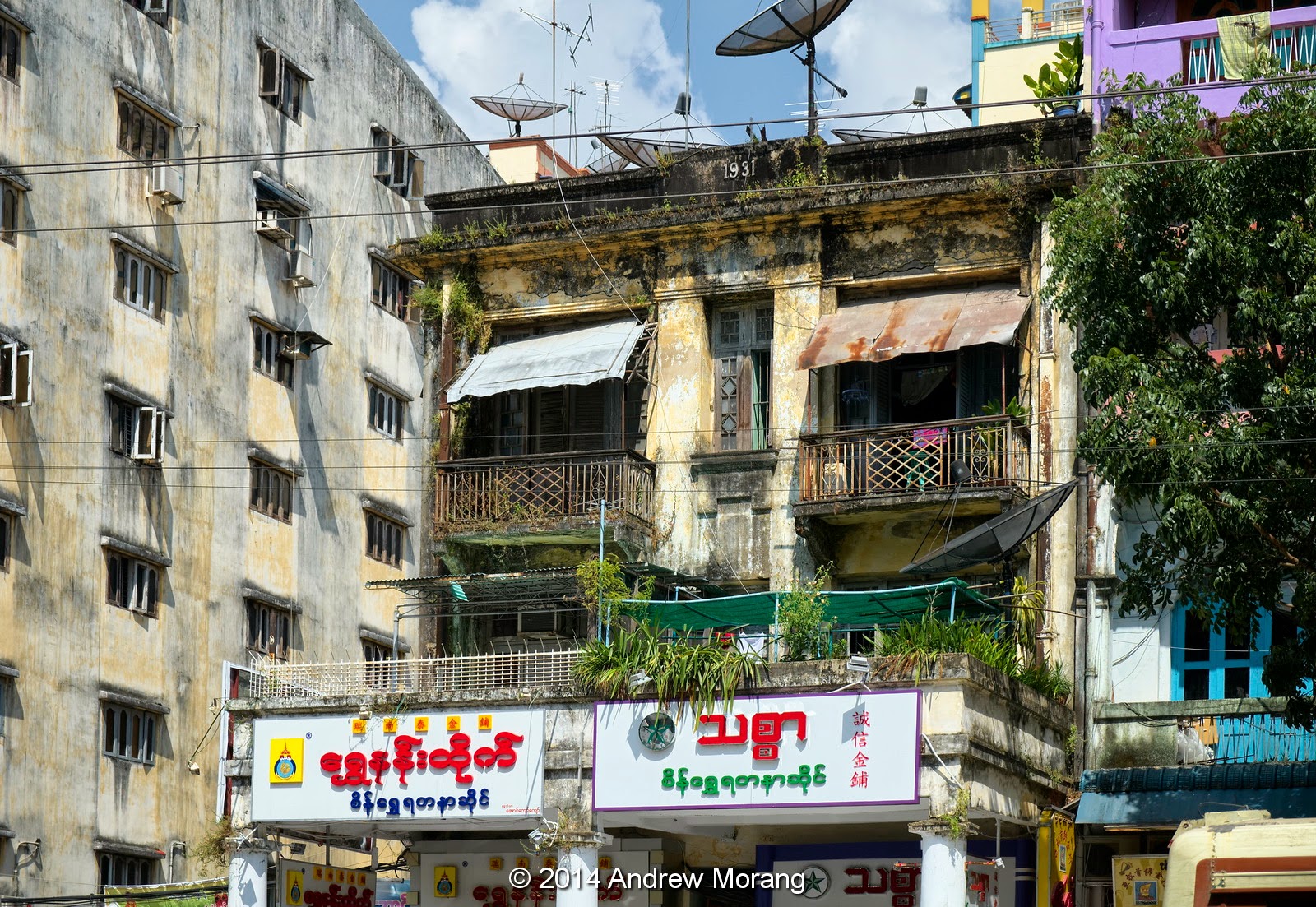 South of the Sule Pagoda is a 1931-vintage British building, still in use but pretty rough. 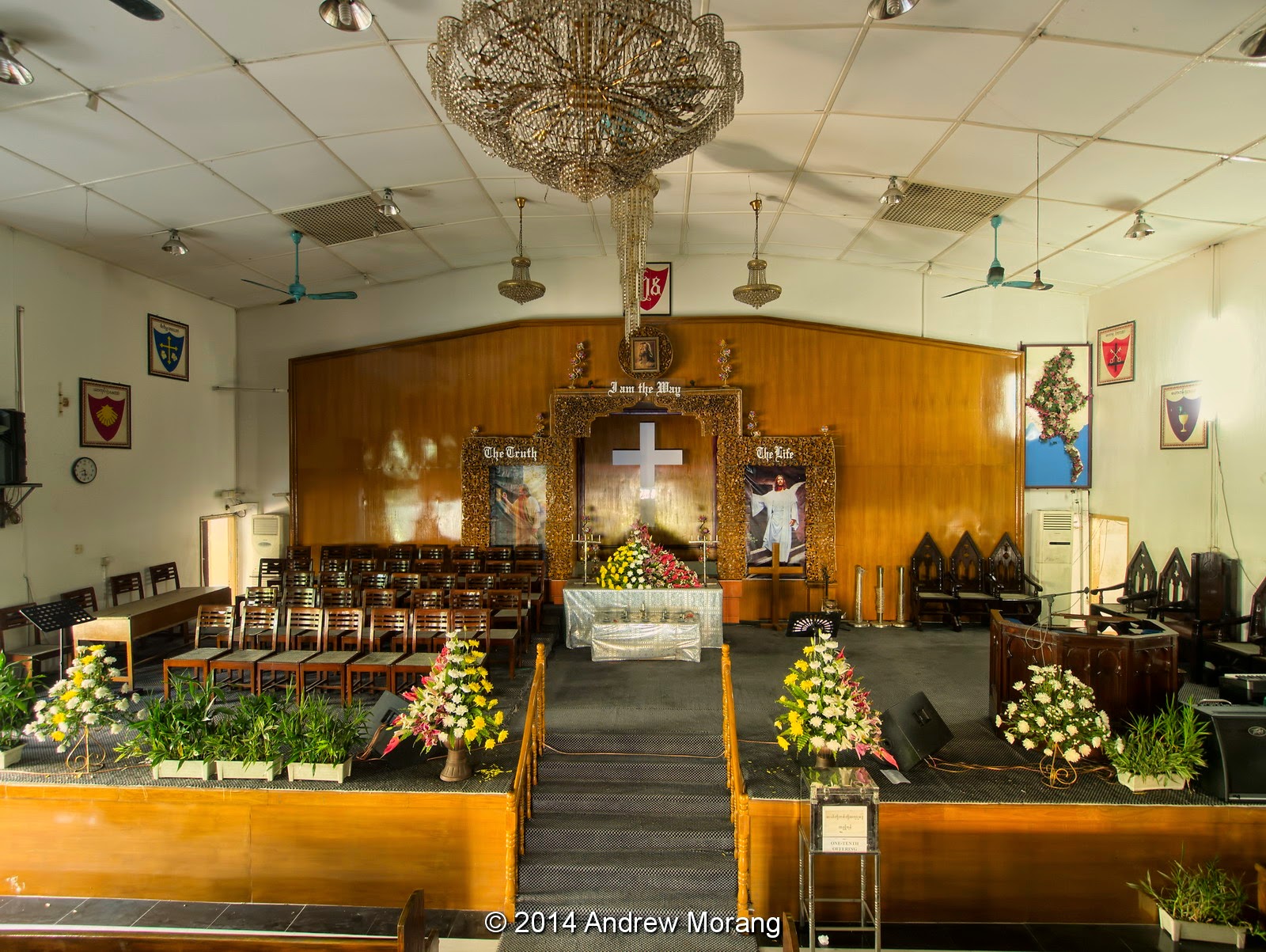 This is the interior of the handsome Emmanuel Baptist Church. The original church was built in 1885 by American Missionaries but destroyed in World War II. The present building is from 1952. 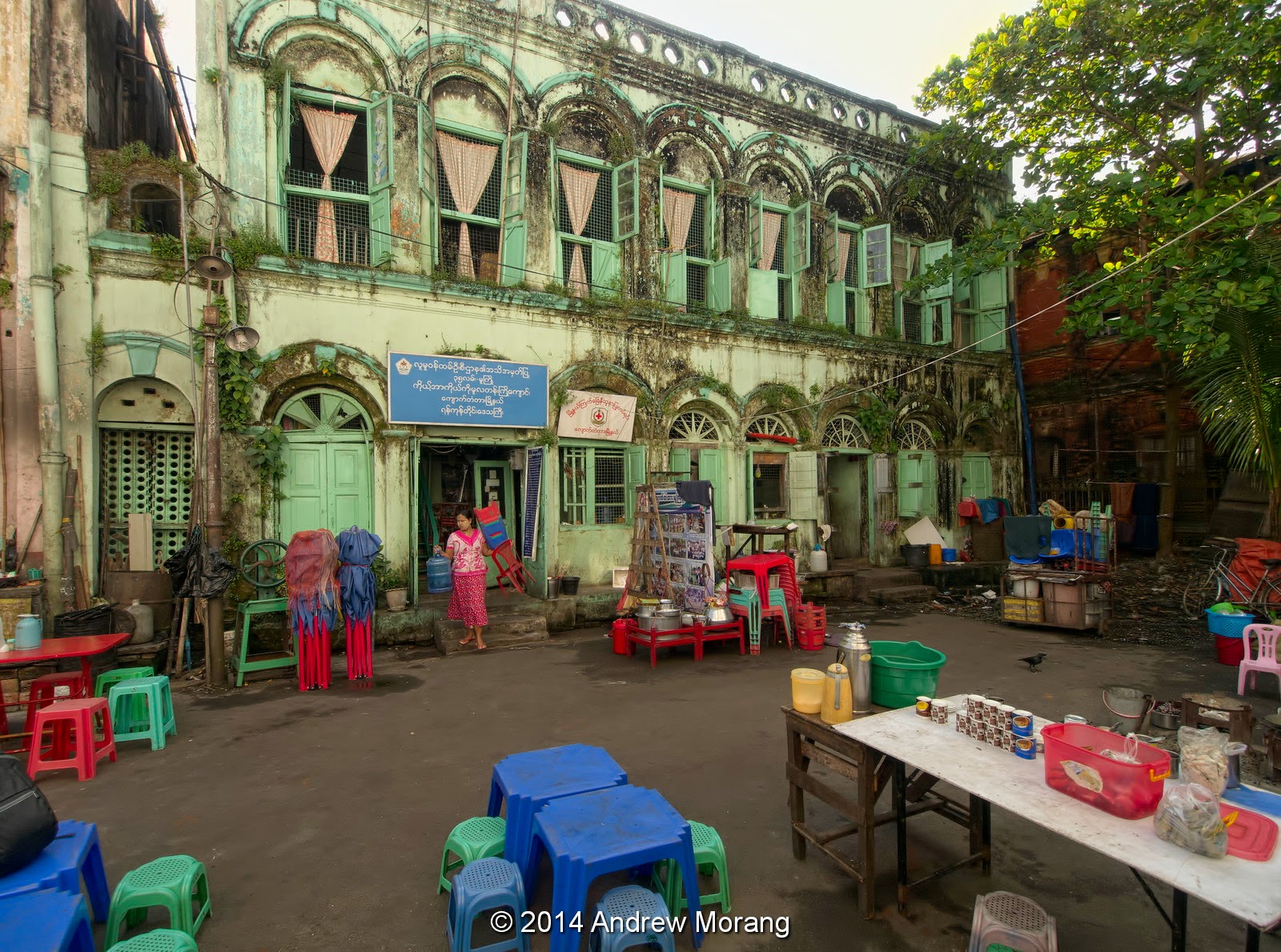 35th Street runs behind the Emmanuel Church. It was dead end and looked crowded, so I could not resist. The old British building had seen better days. 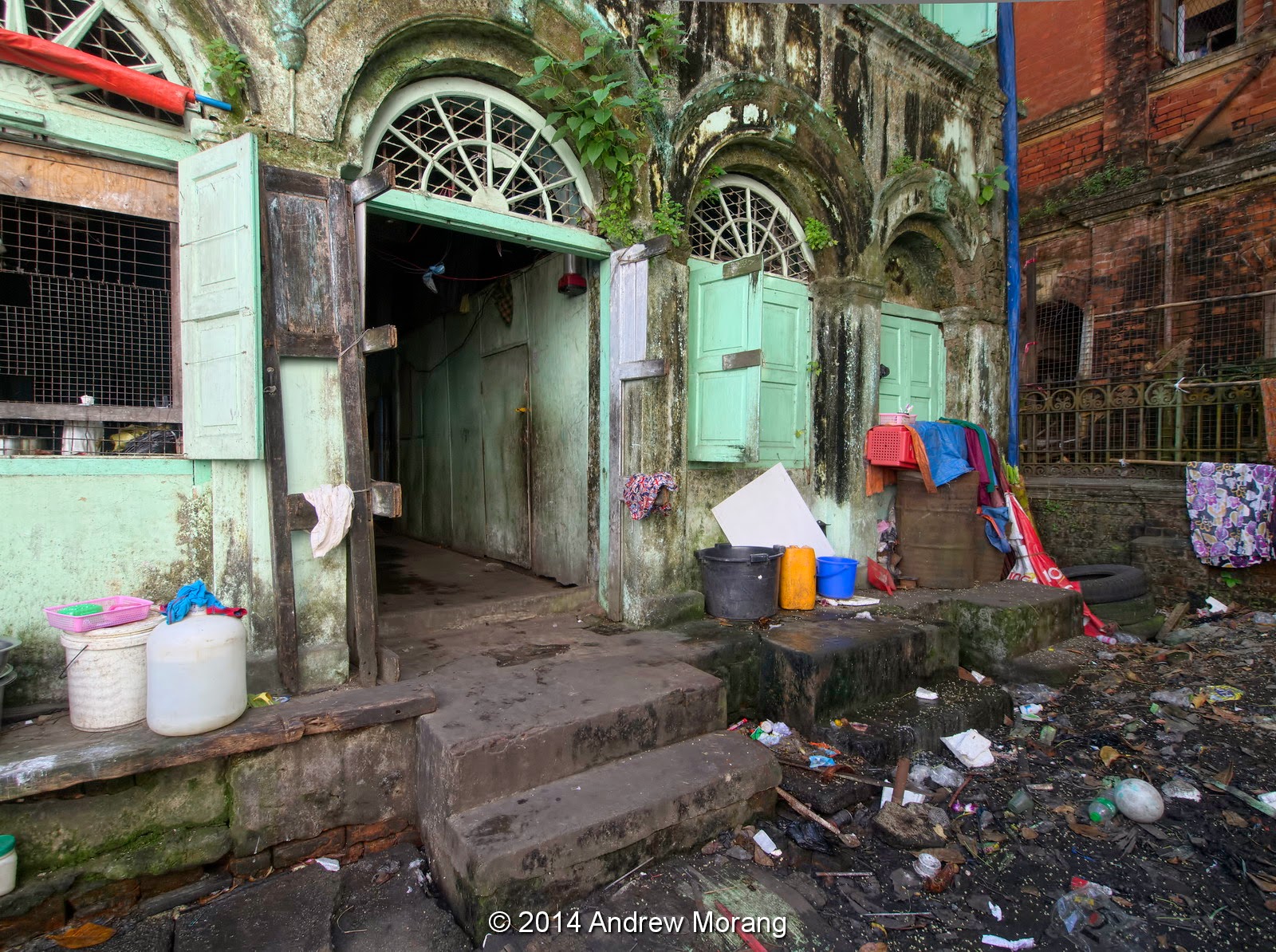 Closer-up, the building is really rough, and there is a lot of trash strewn about. It's a real pity. The red brick wall to the right is part of the High Court Building. 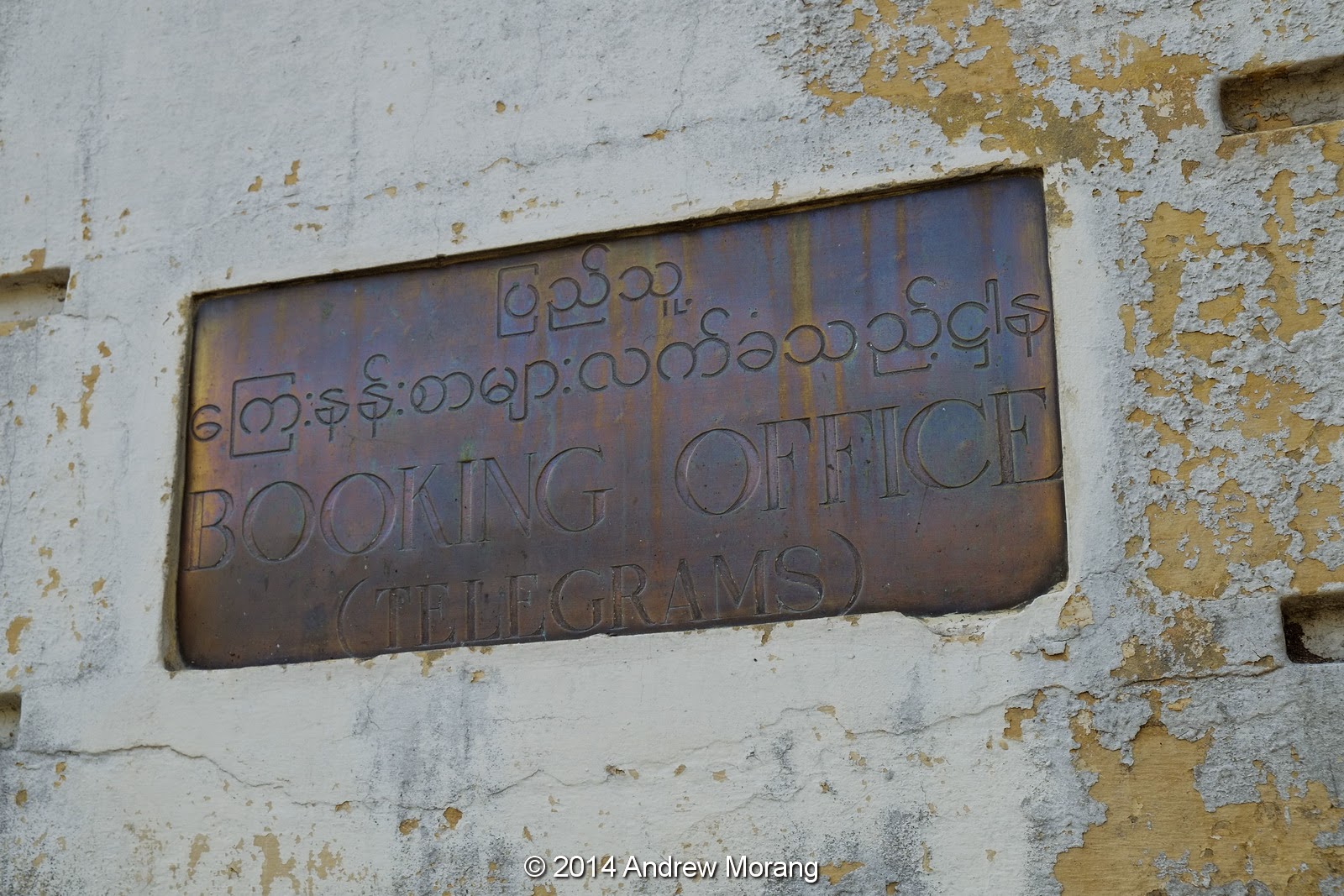 Proceed a couple of blocks, and there is a brass sign indicating the telegram office. Is it possible? 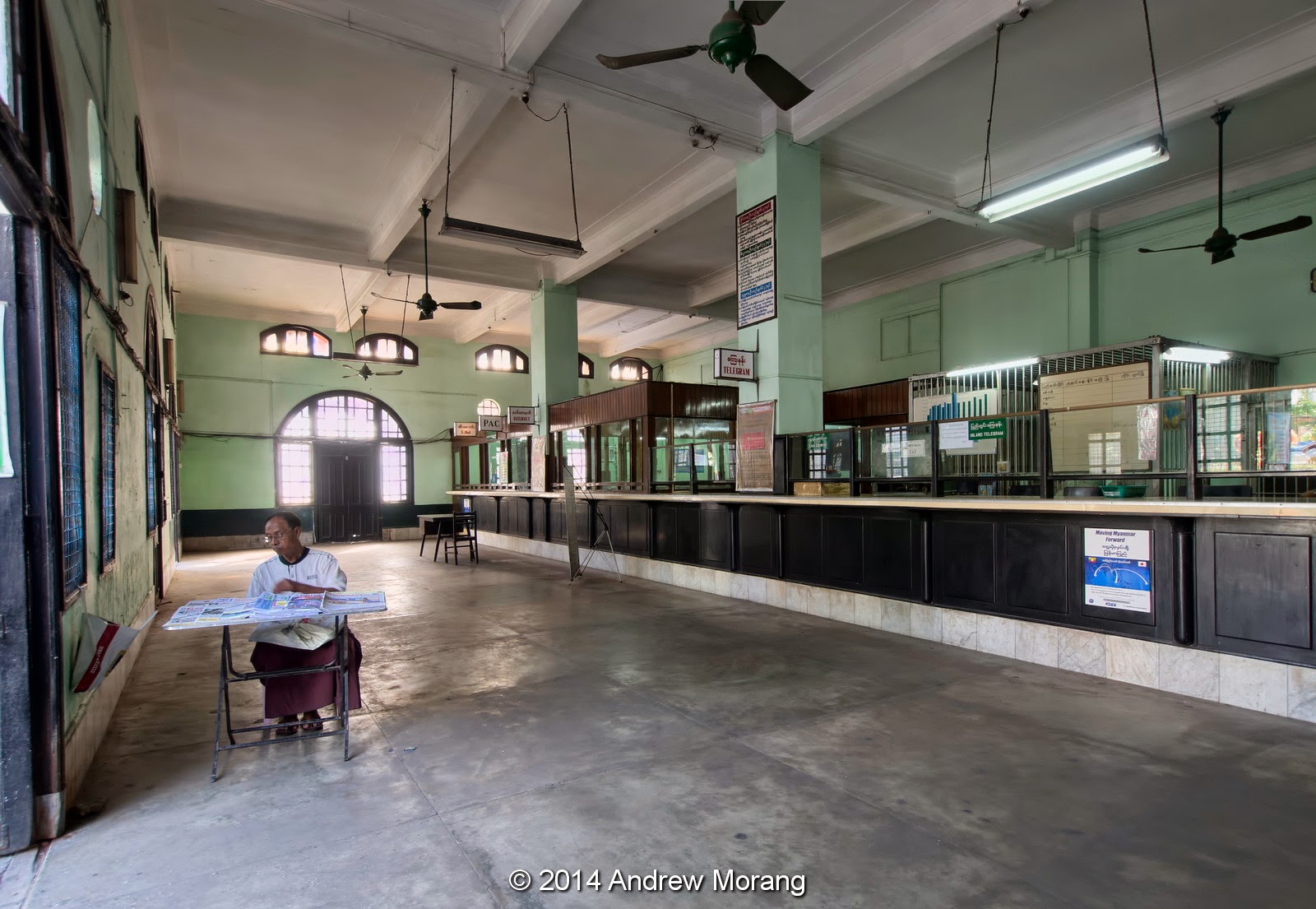 There IS a telegram office, and even an employee or two present. I do not know if you can send a cable to the USA any more (I should have tried). Who would deliver a telegram to your house? A small sign at the end said, "Internet." 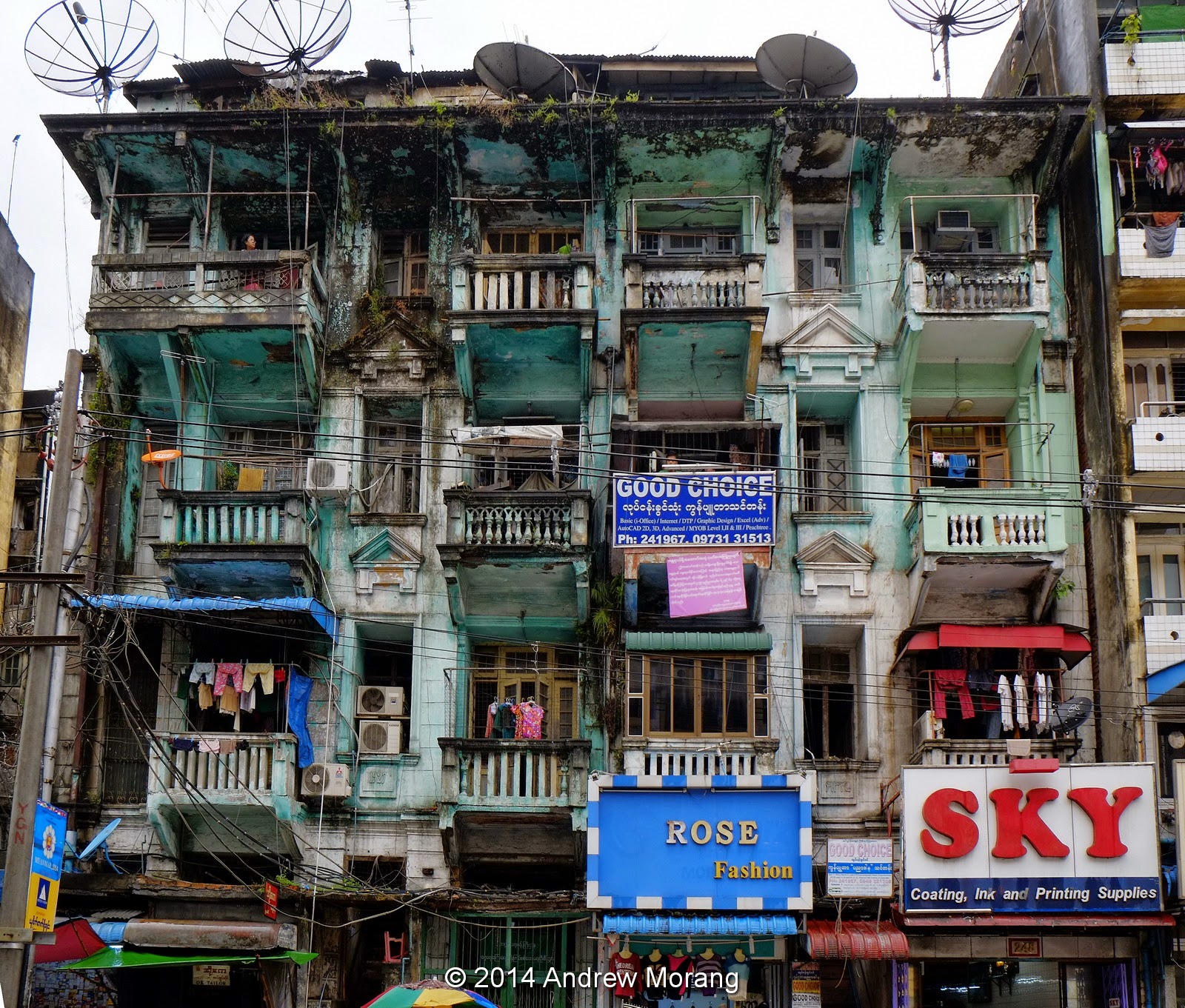 A couple of blocks north on Bo Gyoke Road are many more old British flats. This one also needs a bit of work. 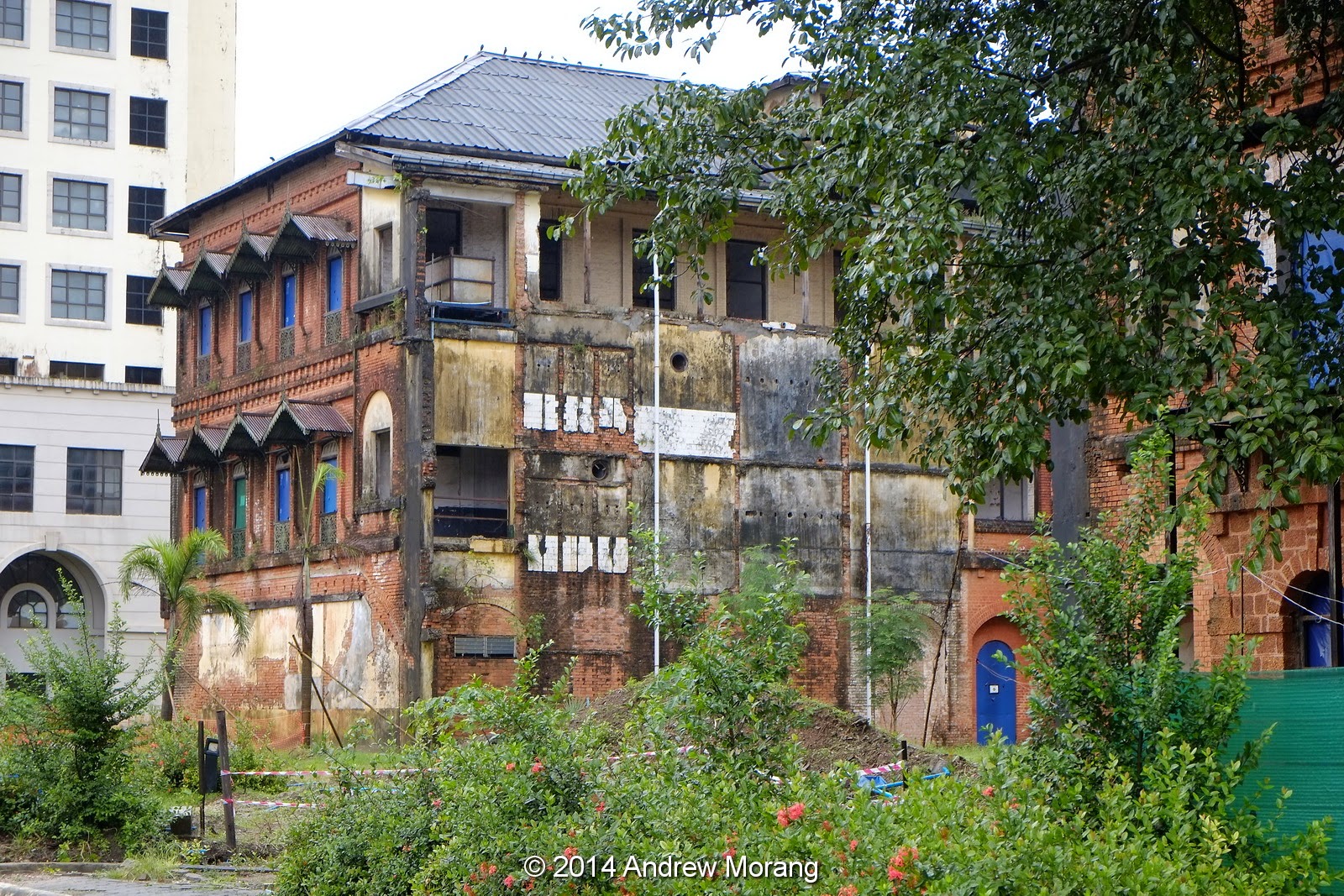 This is the former Myanmar Railways Headquarters. The land has been bought by a developer who will build towers but restore the old brick building.

Rangoon is becoming an architecture destination. Numerous journalists have recognized Rangoon's amazing colonial architecture, and a Google search will bring up plenty of references. As an example, The Independent wrote how the "Colonial past could be the saving of Rangoon."

Thant Myint-U (2011) in a Financial Times article, wrote, "It’s one of the best preserved colonial cityscapes in the world. Rangoon’s unique architectural heritage has survived decades of war, dictatorship, isolation and economic decline. Whether it survives a transition to democracy and renewed prosperity remains to be seen."