Dear readers, for my recent trip to Asia, I decided to do black and white photography the traditional way and take real photographs with film. I had not used Kodak Tri-X in a 35mm camera in at least 15 years, but ordered some rolls and brought them to Asia along with my Leica M2, 35- and 50mm Summicron lenses, filters, and a Luna Pro light meter. 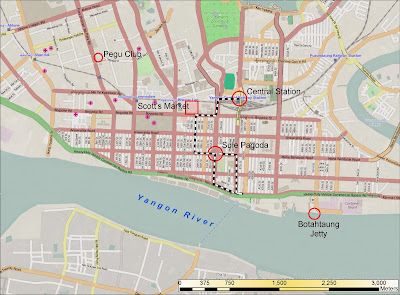 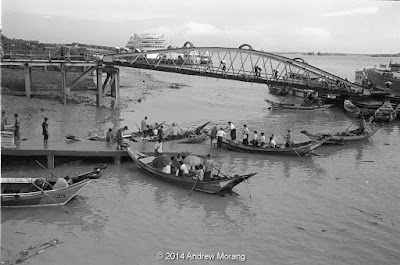 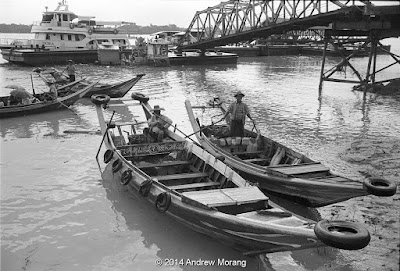 The Rangoon waterfront along the Rangoon River is now mostly commercial, with limited water views. But the map shows that a ferry crosses from the Botahtaung Jetty to the town of Dala on the south shore. While the rest of my group explored the Botahtaung Paya, I wandered down to the shore for the view. I thought the ferry would be a barge with a diesel tug but instead consisted of wood boats with outboards. (Note, you can click any photograph to enlarge it.) 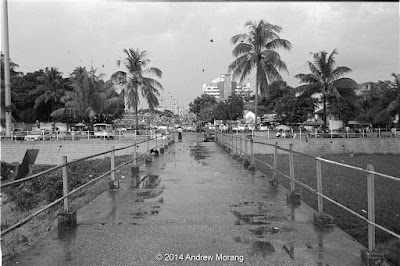 This is the view from the ramp looking north into town during a rainstorm. 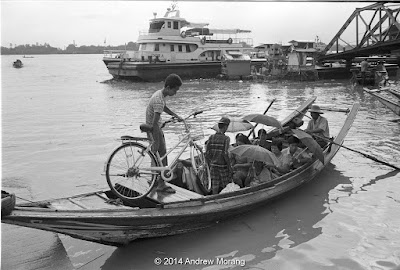 The ferry operators take people, dogs, bicycles, and motor scooters. I did not see life jackets or lights. 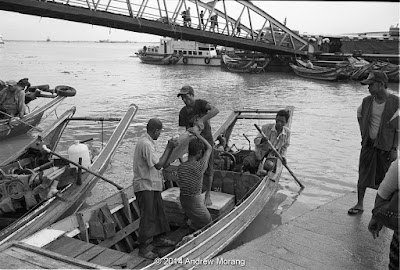 These guys were loading concrete blocks of a size that I know I could not lift, let along hoist into a boat. Notice the fellow's bare toes. 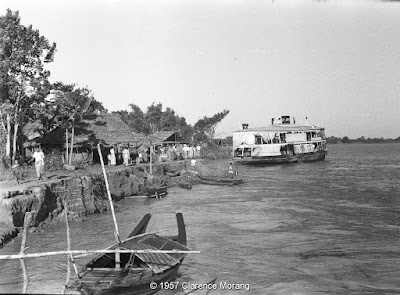 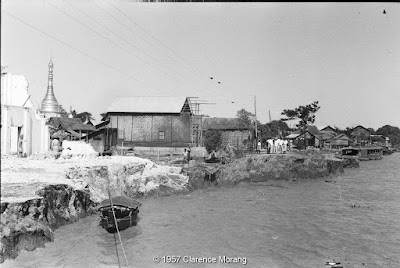 Here are two photographs from the family archives from when we lived in Burma in the 1950s. No one was able to identify the exact location, but it may have been somewhere near the Botahtaung. The banks are sloughing off in the current. In the lower photograph, the temple on the left is being deconstructed to reuse the blocks.

Notice how much the 1957 photographs look like the 2014 ones in tonality and feel. Will our digital files will be viewable after six decades?

Using film is a commitment. You can't casually take a thousand snaps and hope a few are meaningful. And you do not see the results until the film is developed, which may be a few weeks later. If you do not know the craft, you will need to practice. As James Conley wrote in his f/11 blog:


"Shooting film is hard. Compared to a modern digital camera, exposure with the Leica is unintuitive. "Focusing" is a goal rather than a consistent possibility. Restricting oneself to a maximum of 36 exposures is a serious limitation (though in a later post I'll talk about why it's a creative answer). Not being able to see in the viewfinder the effect of various camera settings seemingly distances the photographer from the moment."

Several people I met in Asia were fascinated that I was using a Leica film camera. At the airport X-ray in Hong Kong, the agent asked if I had a Leica M2 or M3 (I responded M2). All X-ray operators were accommodating when I asked for hand inspection. The hotel clerk in Hanoi asked if he could look through the viewfinder and said his father used a Leica. Our friends in Hong Kong had a Leica in the house somewhere. Slowly but surely, many serious photographers are returning to film. I developed my Tri-X in Kodak HC110 developer at dilution B, at 4:30 minutes at 67 deg. F, with 5 sec. agitation every 30 sec. We will look at more black and white examples in later posts.
Posted by Kodachromeguy at 20:12

Thank you for the compliment. For this type of setting, black and white film is definitely the way to express the feeling of the site.