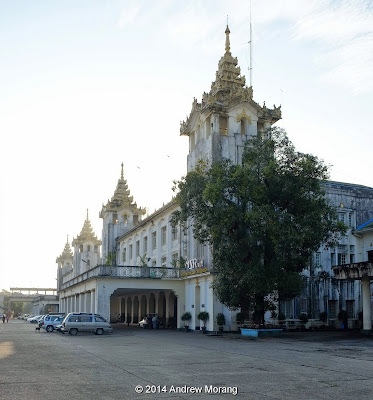 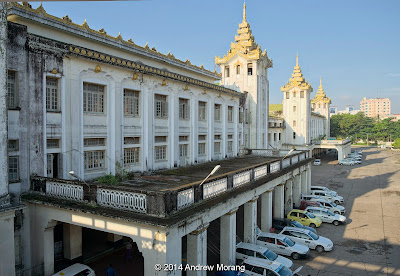 This is the third article on our tour of Rangoon, which is full of amazing architecture. The Central Railroad Station, off Kun Chan Road, is one of the oddest stations you are likely to ever see. The original on this site was bombed by Japanese planes early in World War II, and the building was destroyed by the retreating British troops in 1942. The present building was built (or rebuilt) between 1947 and 1954 based on a design by an engineer Hla Thwin, who used traditional Burmese architectural styles. The four pagoda-like towers are unusual and striking. The grounds north of the station (to the left in the top photograph) once consisted of extensive lawns, but now they are a concrete parking lot.

The size of the Central Station gives you an idea of the importance of the rail network in the immediate post-colonial era. The builders must have assumed that Burma would again be one of Asia's economic powers, as it had been before World War II. Recall that following occupation and wartime destruction, Thailand, Malaysia, Indonesia, Cambodia, Vietnam, and Laos were impoverished and close to starvation (the Green Revolution had not yet greatly increased rice yields). According to Wikipedia, the Central Station is among 190 buildings on the Yangon City Development Committee’s list of heritage structures worthy of preservation. 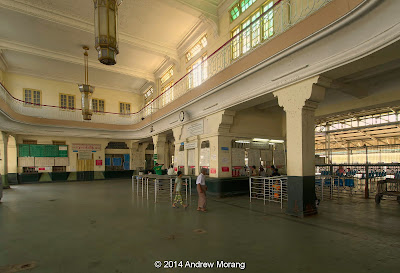 Walk in the central entrance, and you enter an elegant ticket hall. This is where you buy long-distance train tickets. The ticket boots are from a previous era - no computers, no terminals, just some agents selling tickets. The signs are mechanical, meaning paper. 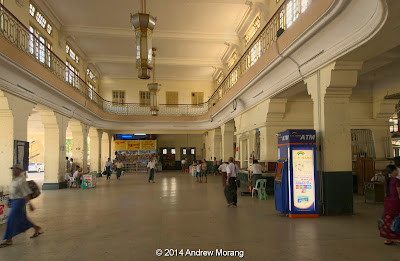 The next ticket hall to the east looks similar (and I am not sure why there were two halls), but this one has a modern feature: there is an ATM machine, a recent innovation in Burma (post-2013?). I tried to go upstairs, but all doors were locked. I do not know if offices in the upper floors are occupied. 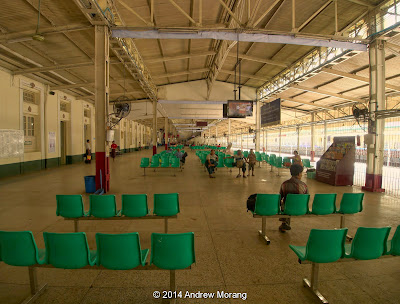 The shed next to the tracks is quiet, but there are plenty of chairs awaiting their occupants. 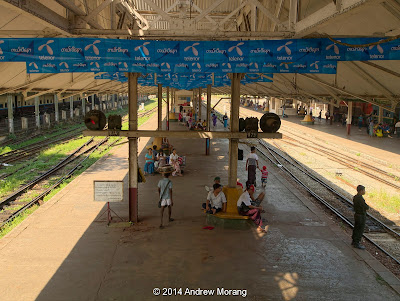 If you plan to take the Circle train, you cross over to tracks 3 and 4. A guard directs you. An agent in the square ticket house way in the distance will write out a ticket for you and collect your 600 Kyats (= $1 US). From the overpass, you can also ascend to the Pansodan Street street overpass. 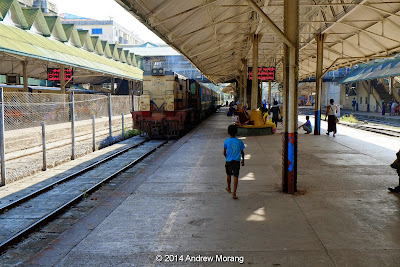 The locomotives, rolling stock, and tracks are a bit rough. Older locomotives were imported, but a newspaper article stated that the Burmese were beginning to make locomotives domestically. 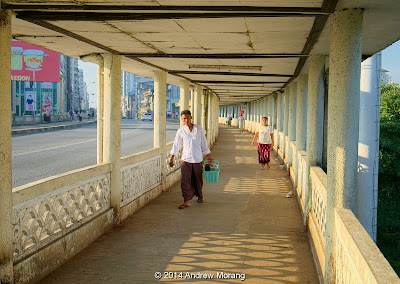 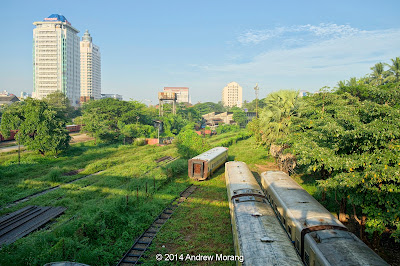 From the Pansodan Street overpass, you can see that a large section of the rail yard is semi-deserted, the tracks slowly growing over with brush. It was likely much busier in the British era. The rusty water tower was probably for steam locomotives, and I read about a plan to introduce steam trains for tourists. 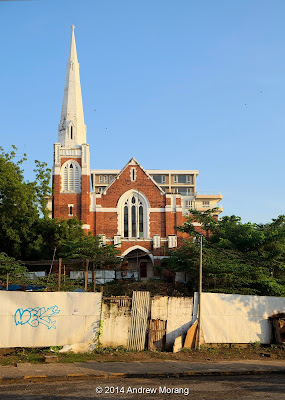 Another remnant of the British era is this handsome brick church across the street from the station. I think it is St. Anthony's Catholic Church, but may have written the wrong name. Once, Rangoon was a city of graceful church steeples, with every possible Protestant and Catholic denomination. It was a melting pot of religions, and you still see churches, mosques, temples, and synagogues only blocks from each other.

These digital images are from my Panasonic G3 camera with 9-18mm Olympus lens or a Fuji X-E1 camera with Fuji 18-55mm lens. I processed the RAW files with Photo Ninja software. I also used Kodak Tri-X film in a Leica camera here, but have not yet scanned the negatives.
Posted by Kodachromeguy at 14:06

I visited Yangon for the first time last April and I was fascinated by its mixture of styles, architectures and states of conservation! ;)
I took more pictures in my 3 days in the city than I usually shoot in weeks!

Thank you for your comment. I agree, Yangon has an astonishing wealth of photographic subjects, especially for photographers interested in crumbling architecture. I am still sorting, labeling, and purging photographs from my trip.