The Rangoon Circle Train is a commuter line that takes a leisurely and bumpy route from the Rangoon Central Station to the northern suburbs and back in about three hours. The Circle is not on the normal tourist inventory but is popular with independent travelers because it is such a great cultural excursion. 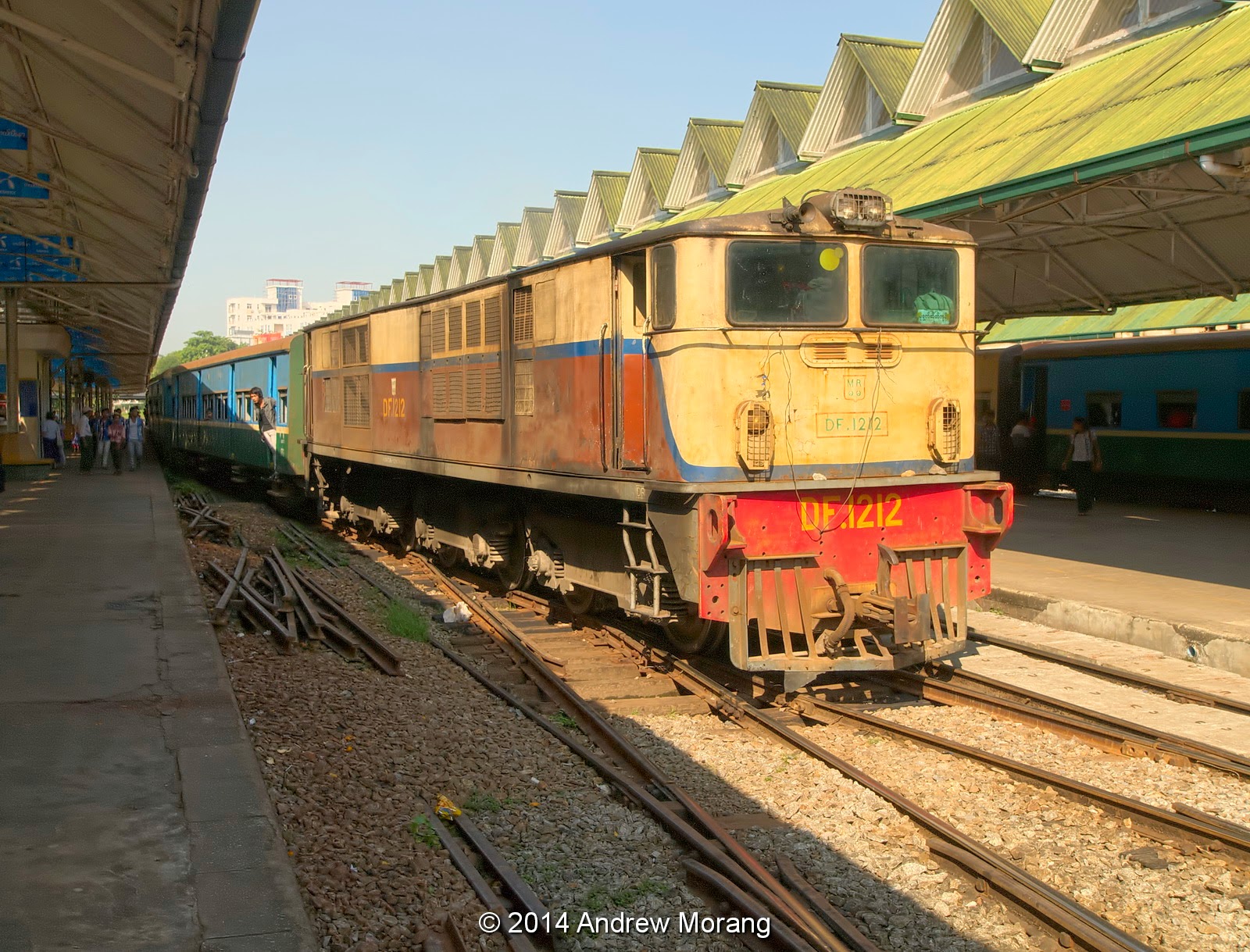 To take the ride, go to the imposing Rangoon Central Station. Guards or station employees will direct you to the crossover to Tracks 3 and 4. The crossover also gives access to Pansodan Street, which crosses the rail yards on a highway bridge. At the ticket office on the platform, we bought the 600 kyat (tɕaʔ) (= $1.00!) ticket for the "luxury" air-conditioned train. At the last minute, we took the non-air-conditioned train with open windows instead, which should have cost only 100 kyats (15 cents). 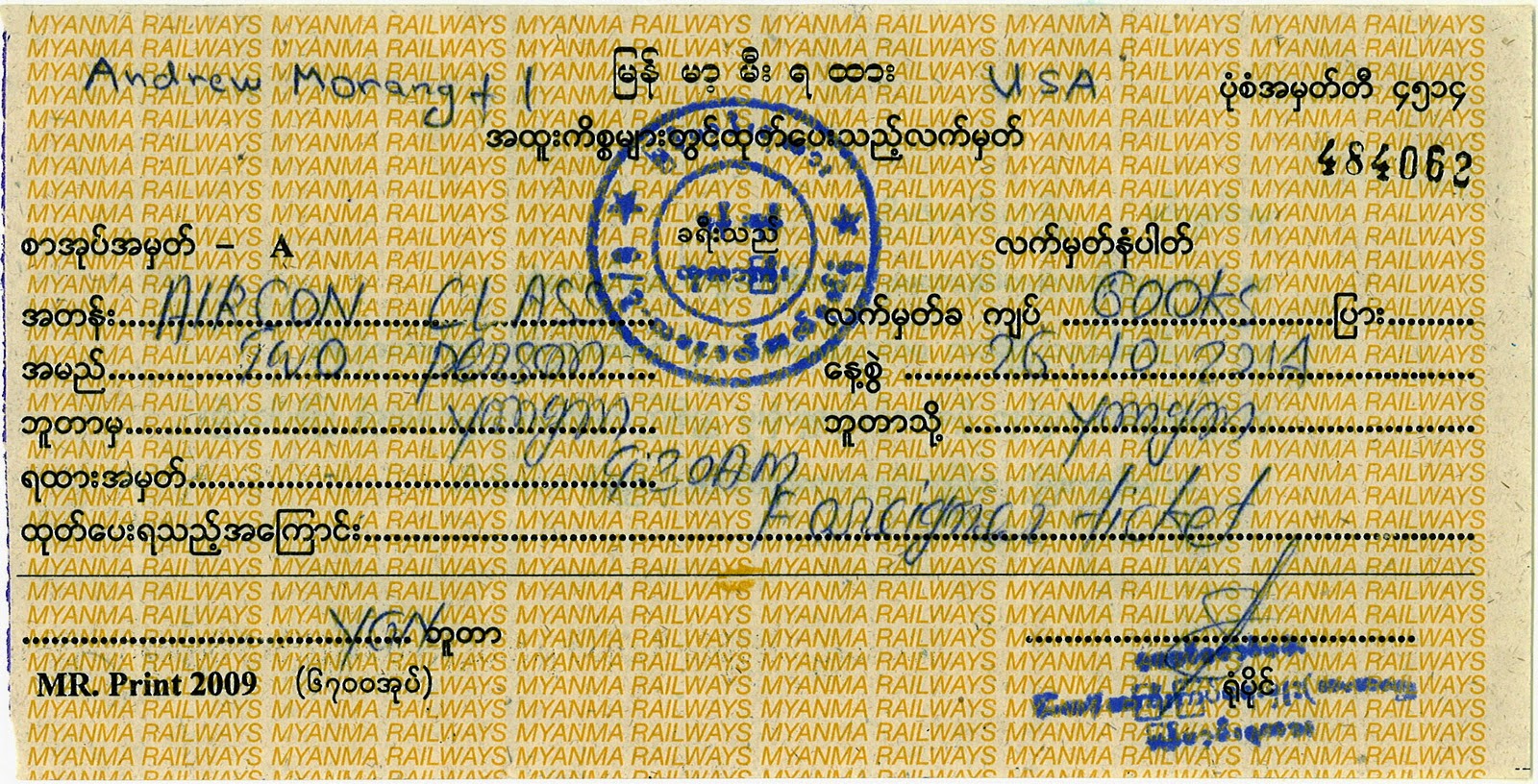 Her is the ticket, neatly filled out by hand on multiple copies and officially stamped. 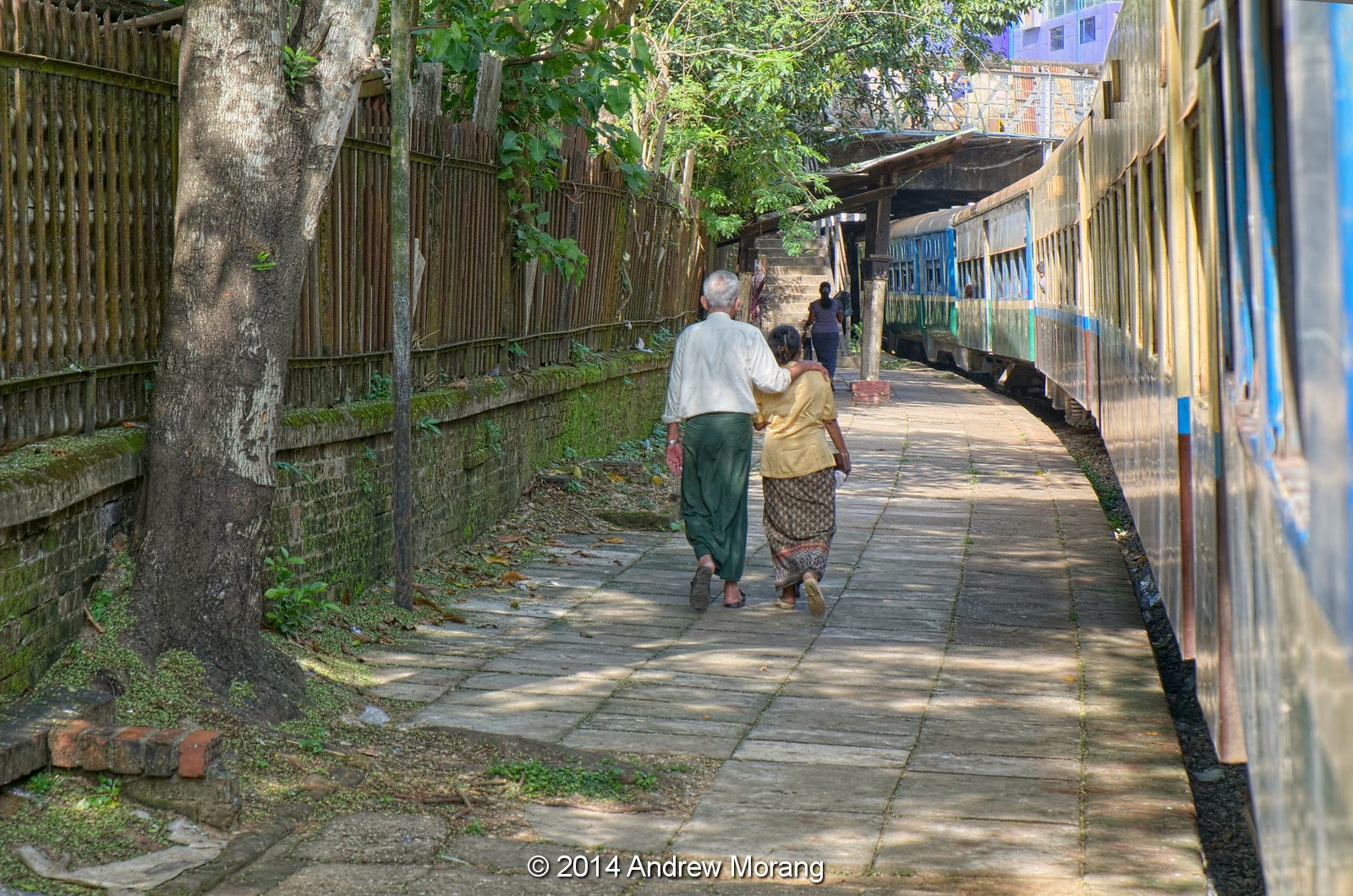 The rails and rolling stock look well-used. The locomotives were imported, but I saw a newspaper article that said locomotives would soon be built in Burma. Ask someone which train to take. Possibly it does not matter. Take some water with you, although vendors in stations sell bottled water. Do not drink too much because toilets might be a bit dicey. 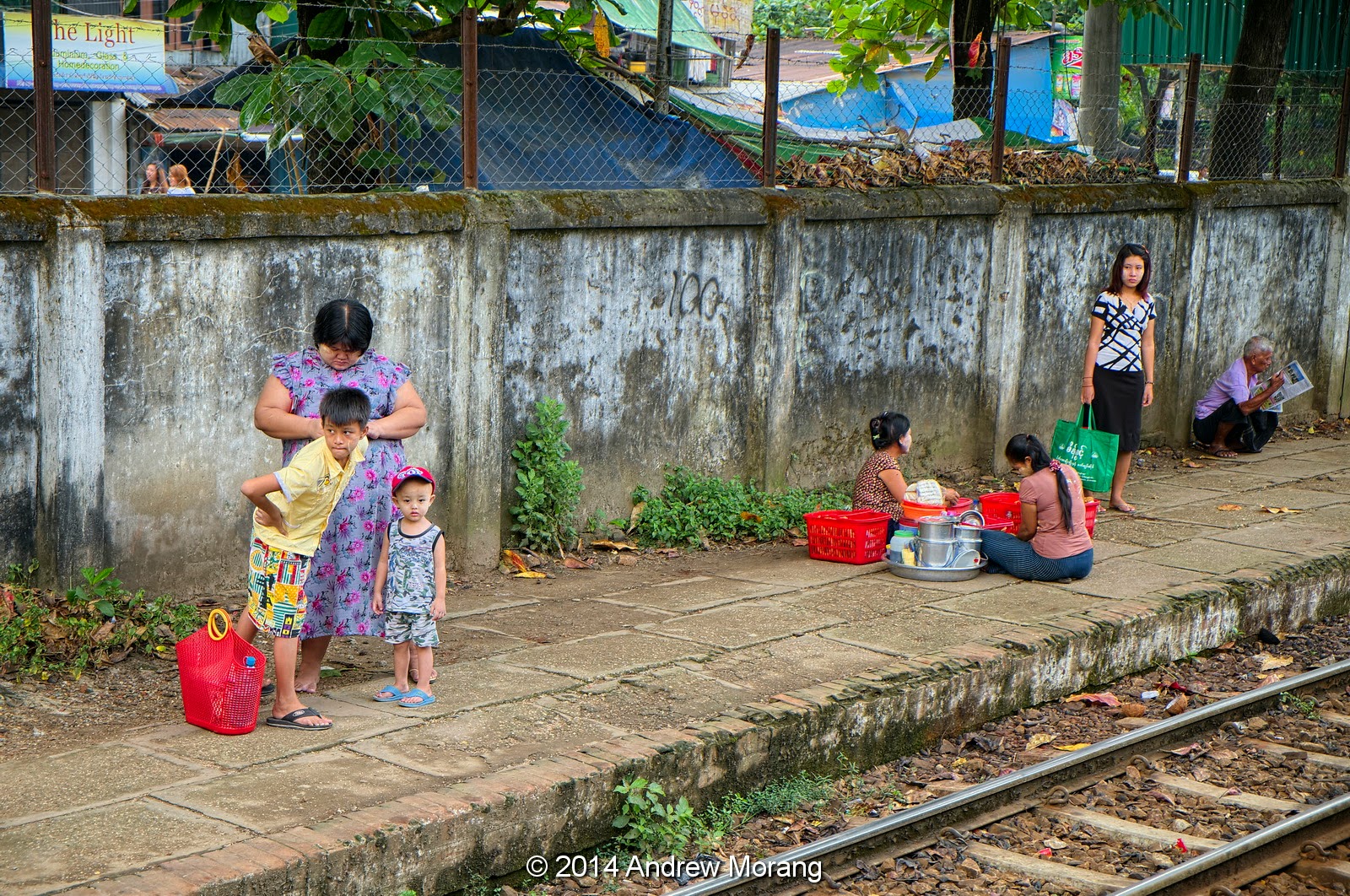 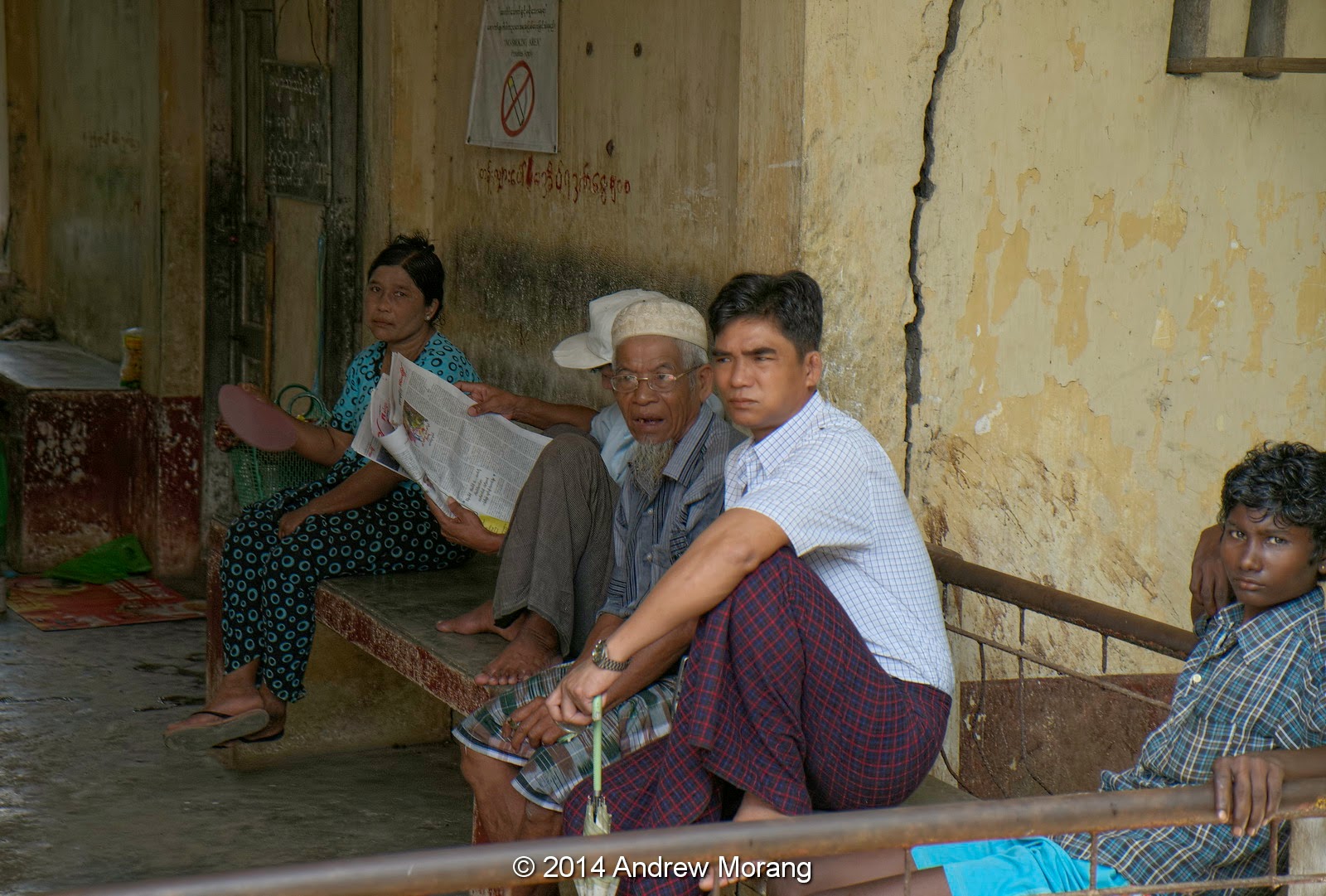 The train trundles along at a leisurely 15 miles per hour, stopping every few minutes at one of the stations. The track is so rough, the stops are a good time to take photographs. 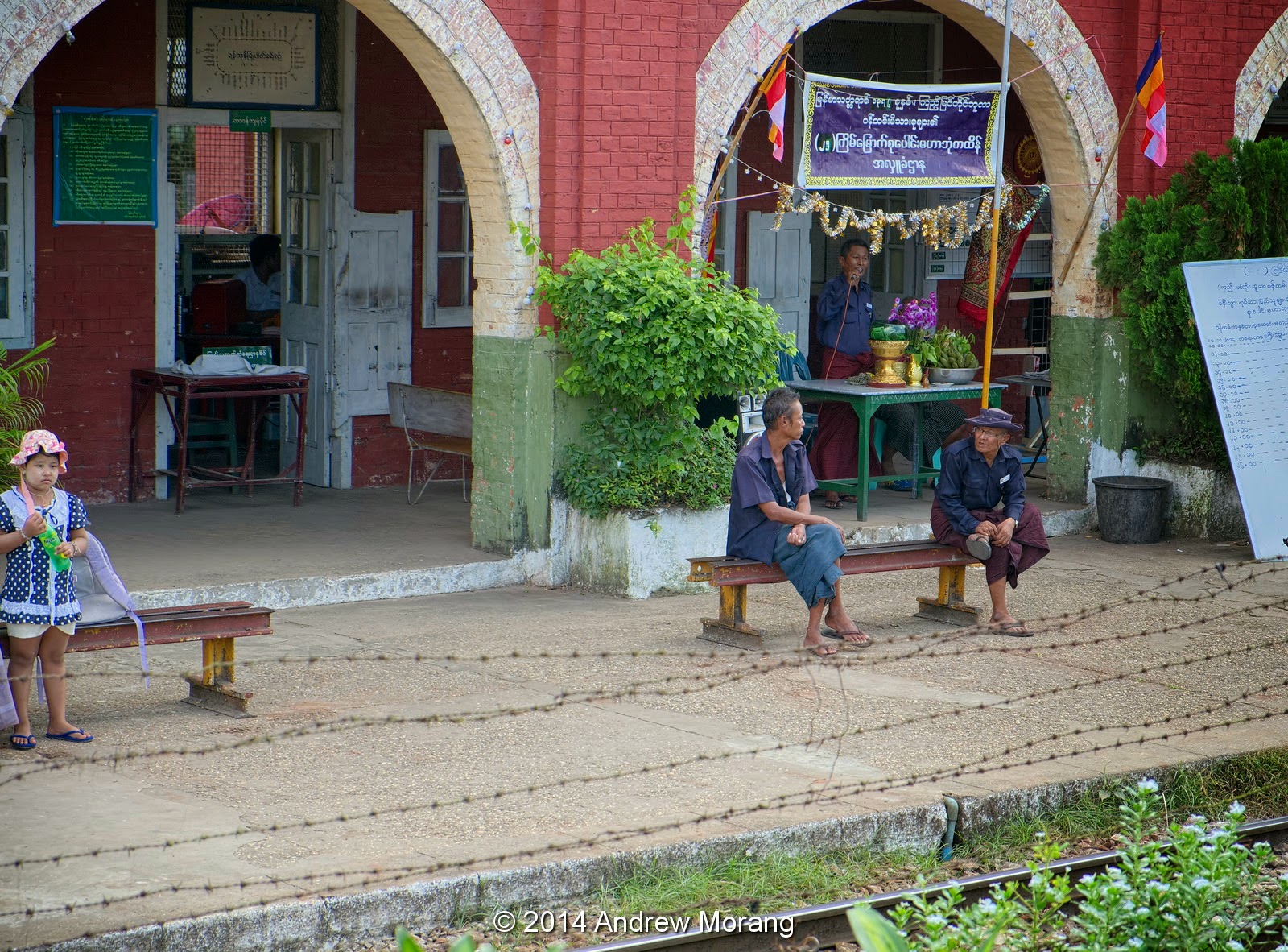 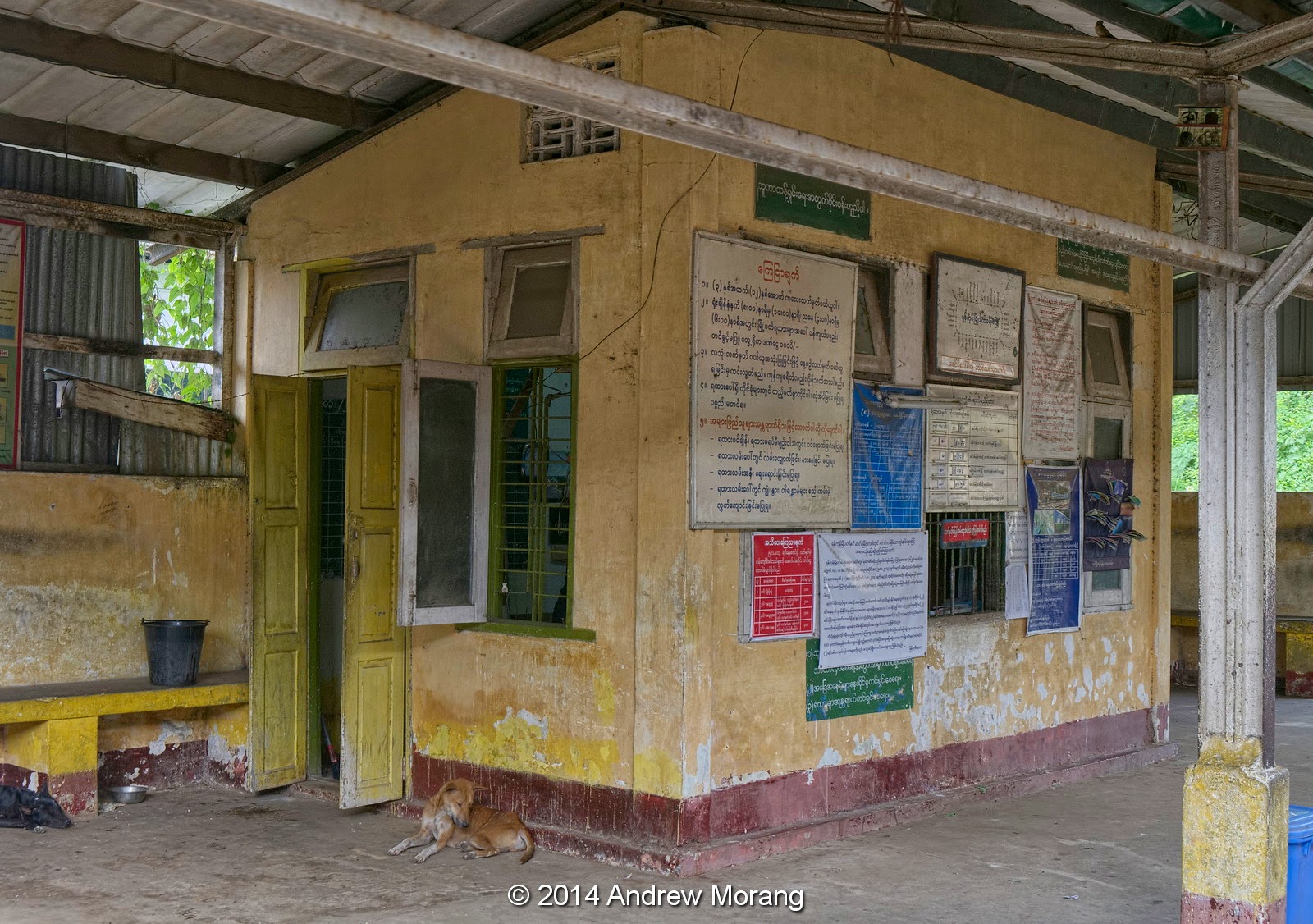 Some of the stations are left from the British era, while others are simple concrete platforms with steel rain covers and a ticket office. 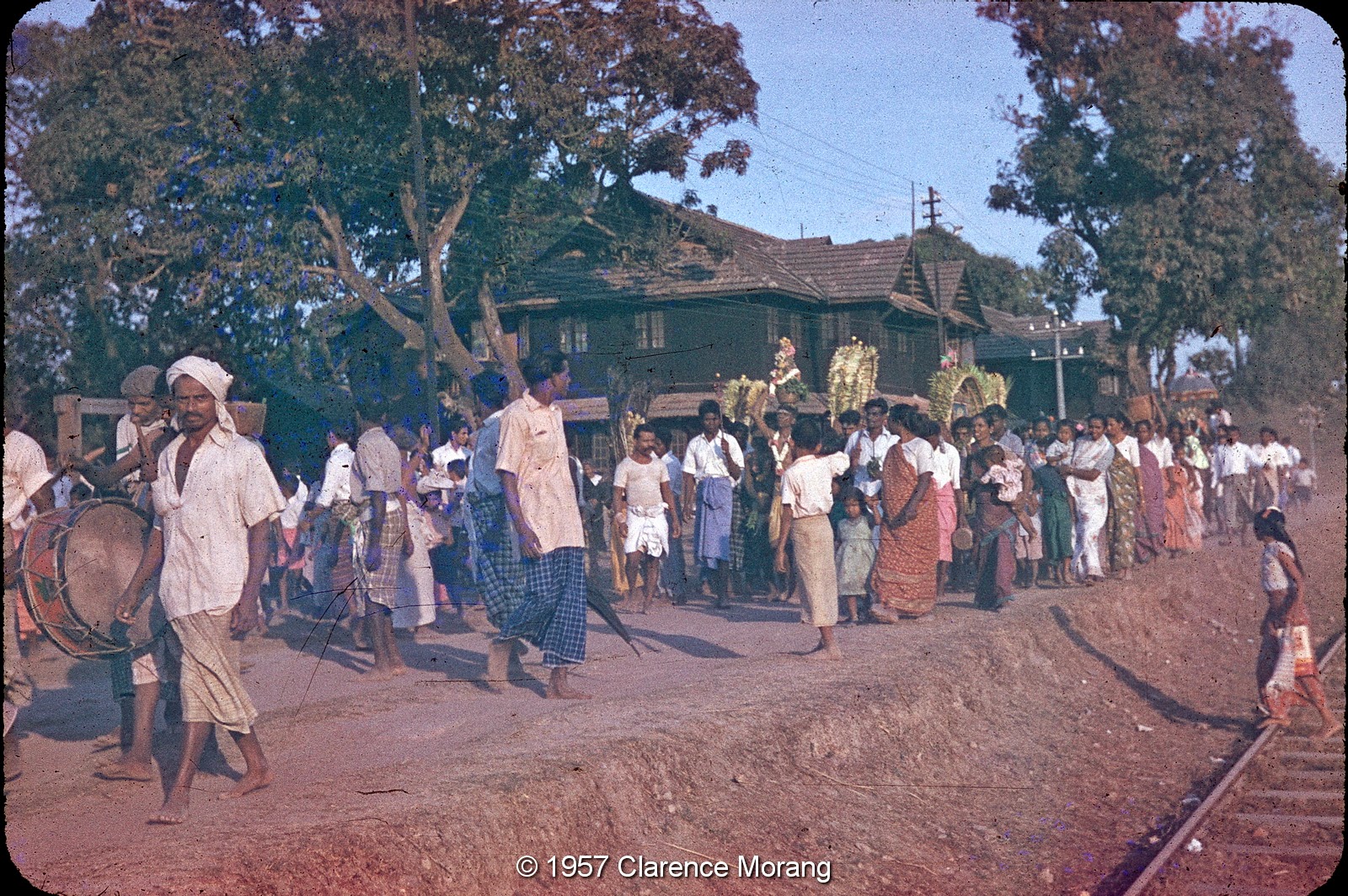 This is one of the family photographs from the 1950s, showing a Hindu procession (possibly funeral) somewhere along the tracks. The wood English-looking building in the background may be a station. (This was an Anscochrome slide taken with a Leica camera.) 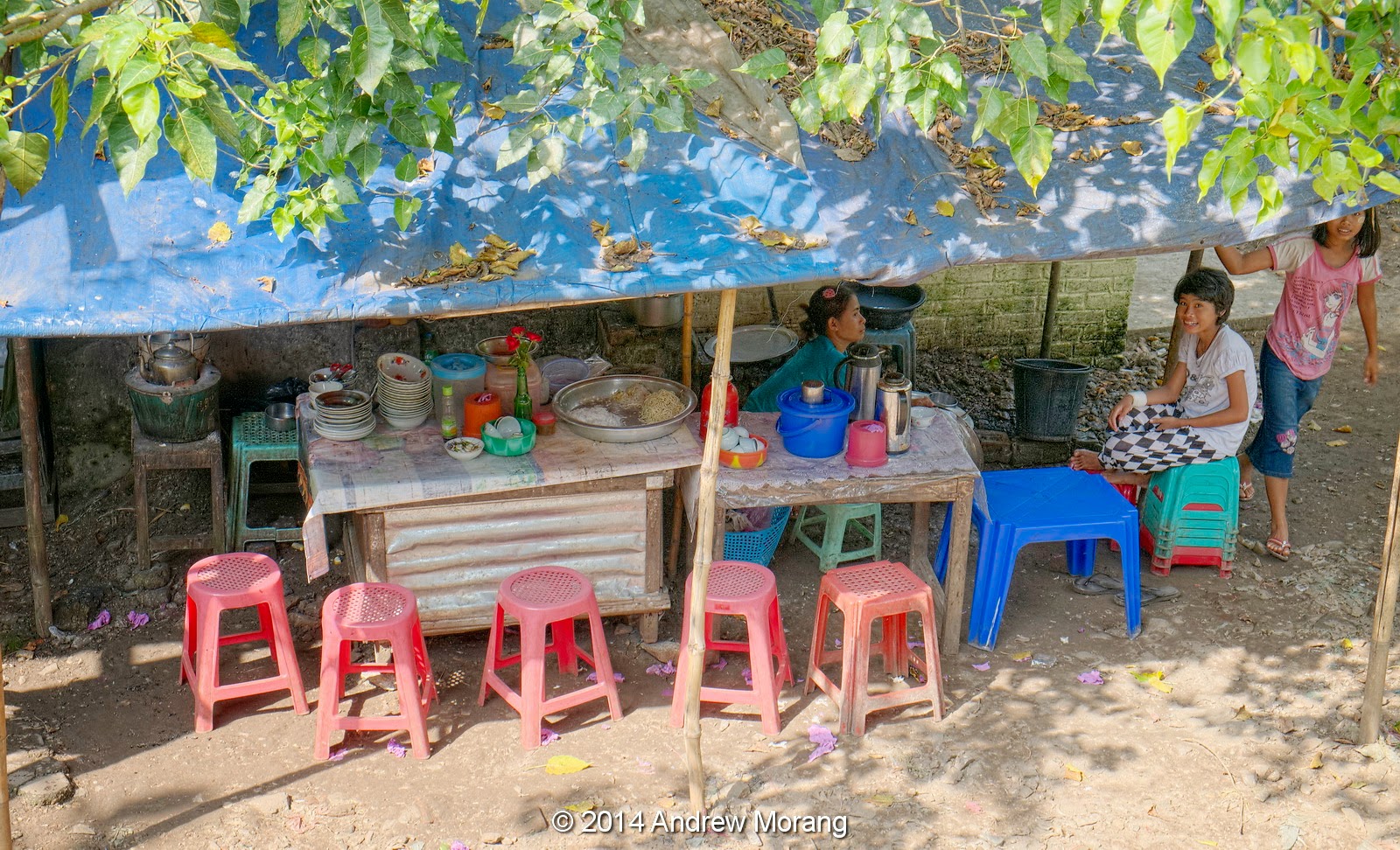 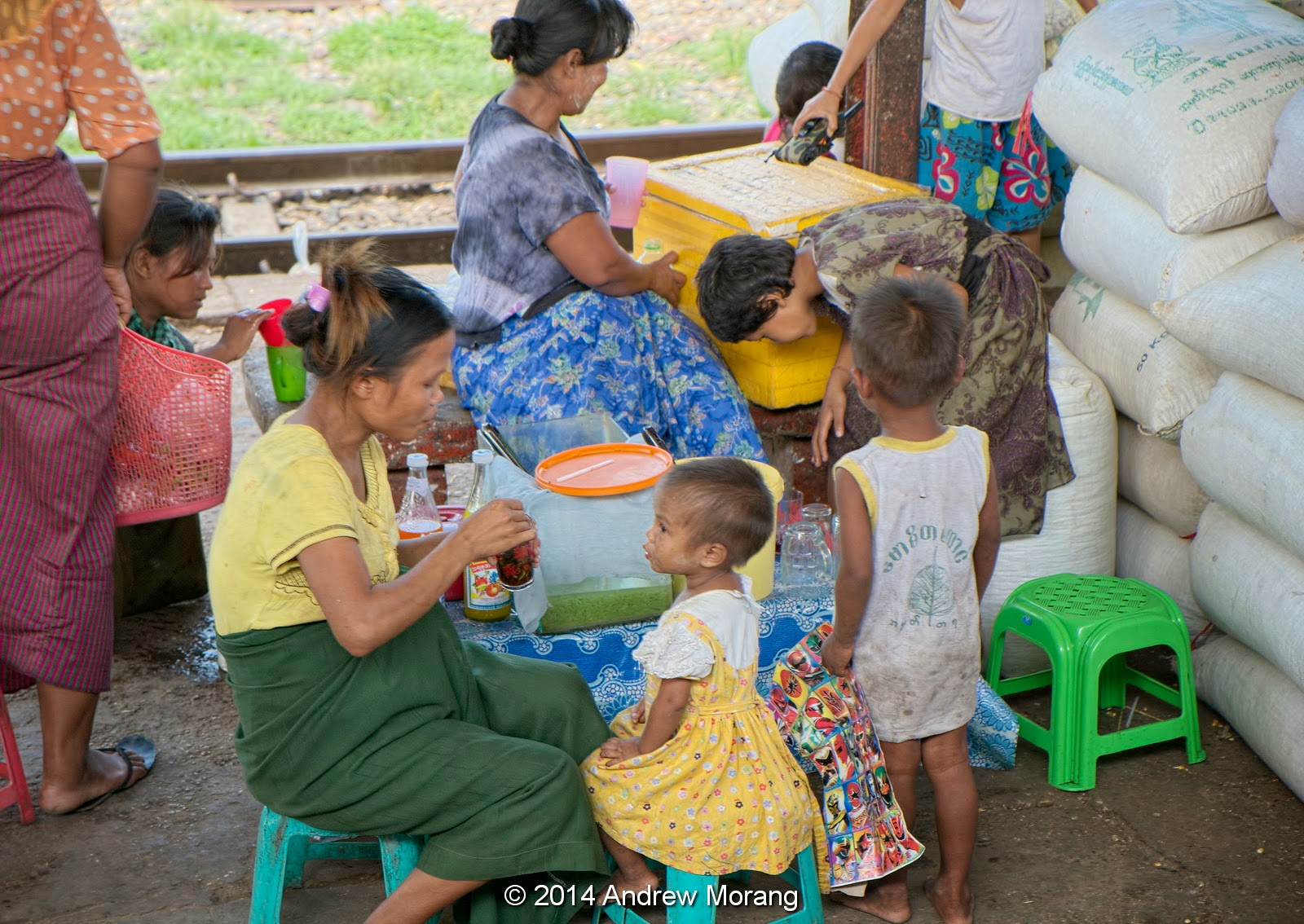 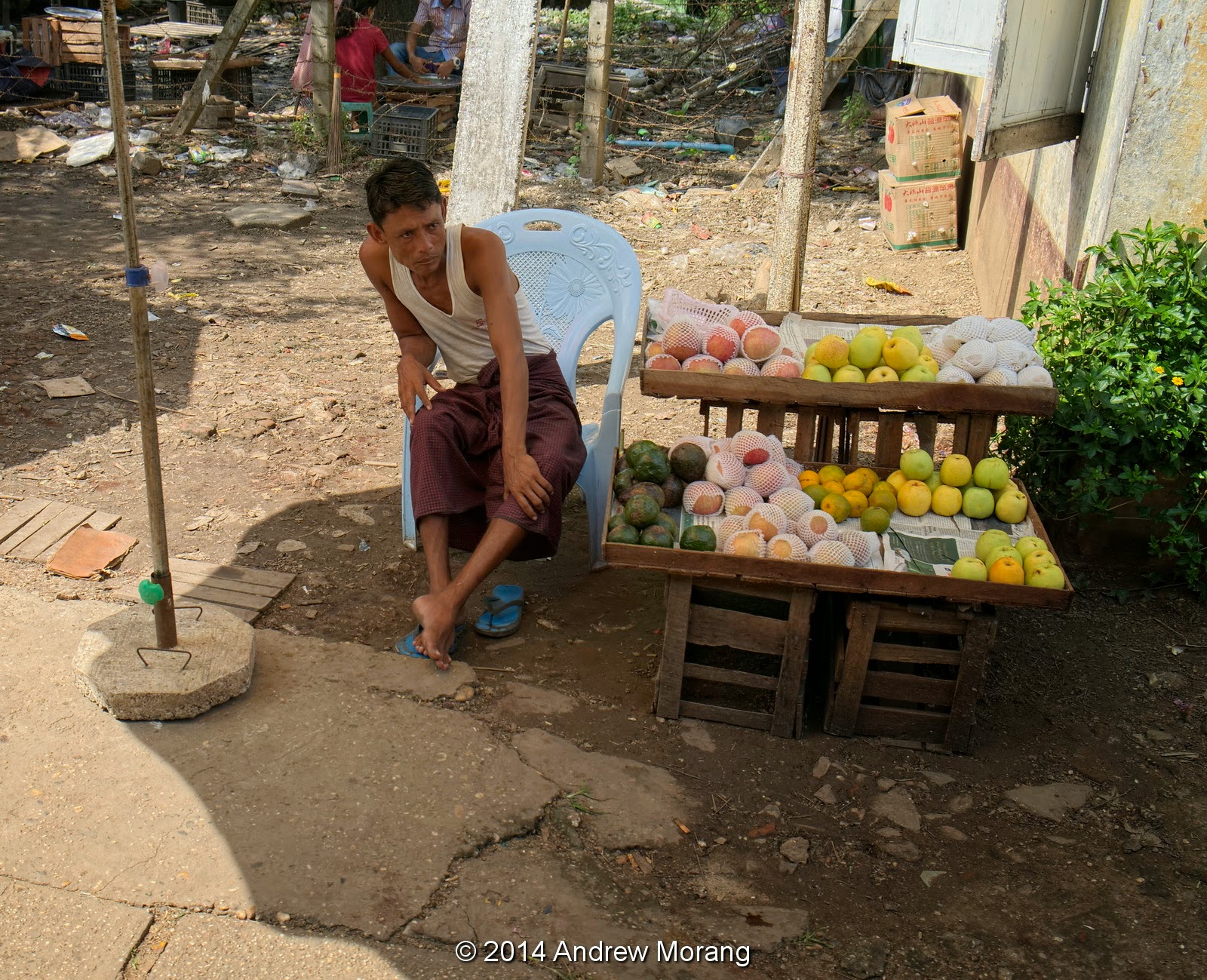 What is so interesting about the Circle train is the window into the day-to-day lives of ordinary people. You see them eating, waiting, working, selling, talking, and tending to their children. 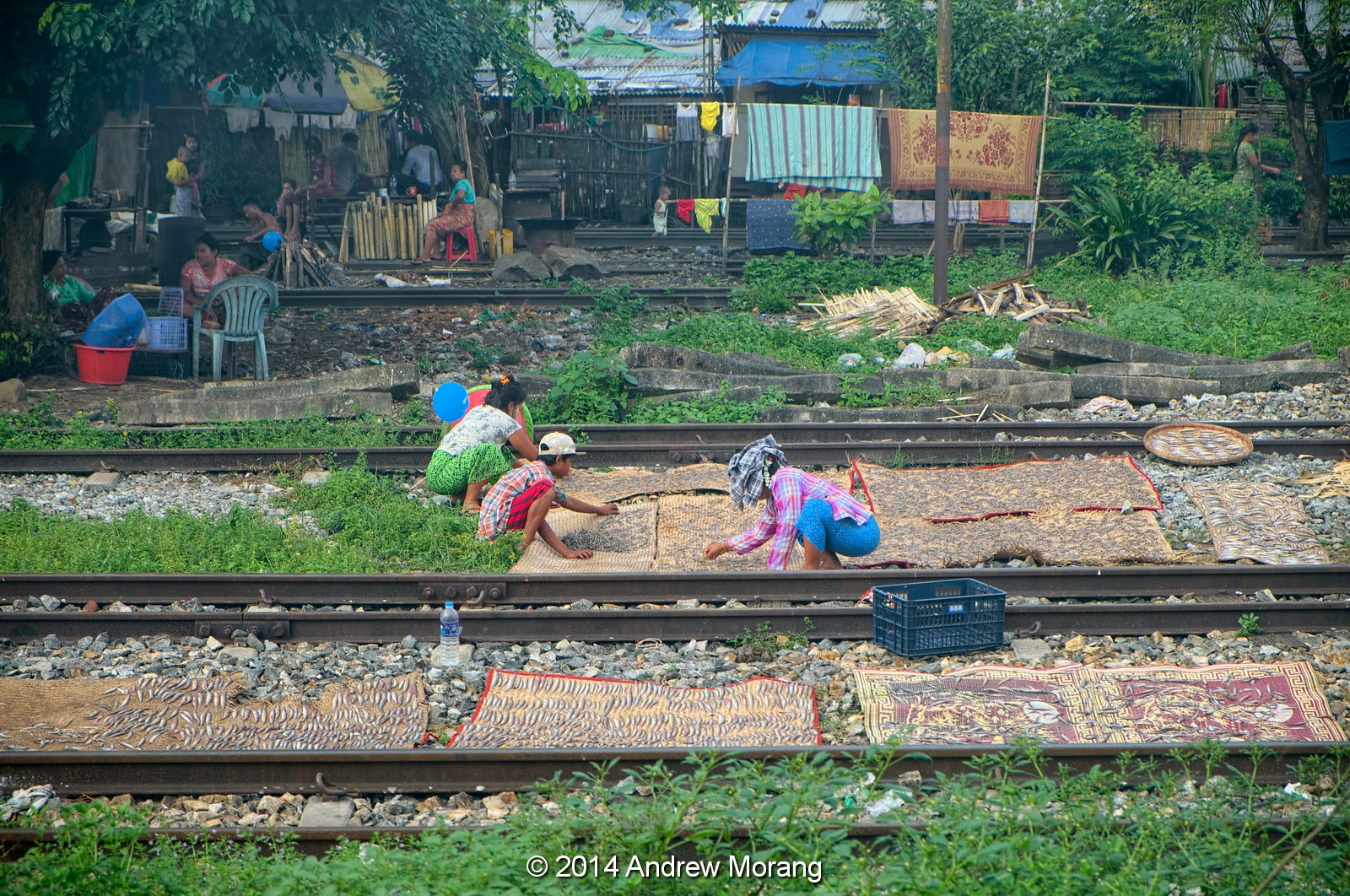 Odd sights await you: I think these people were drying sardines out in the sun. Yummy. 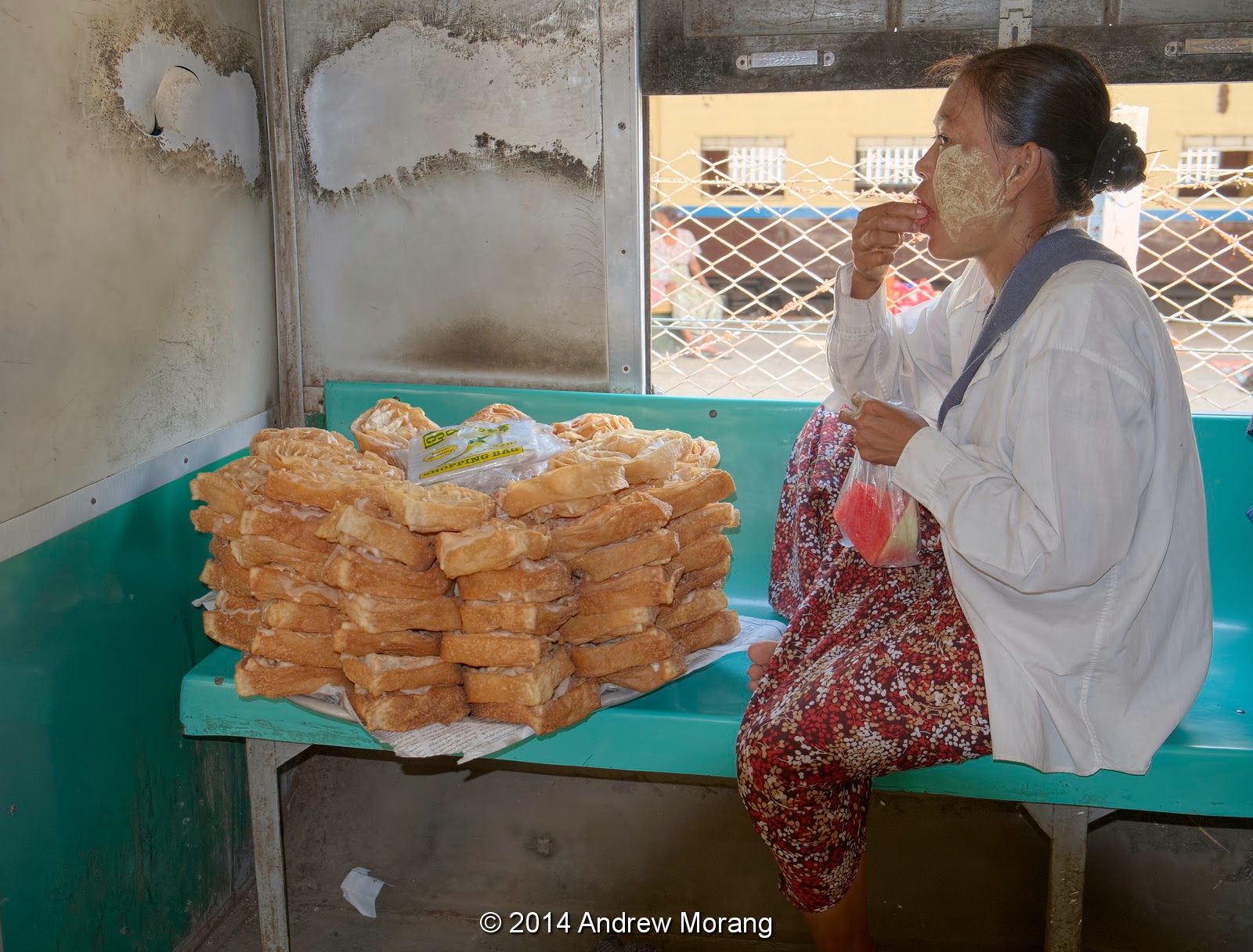 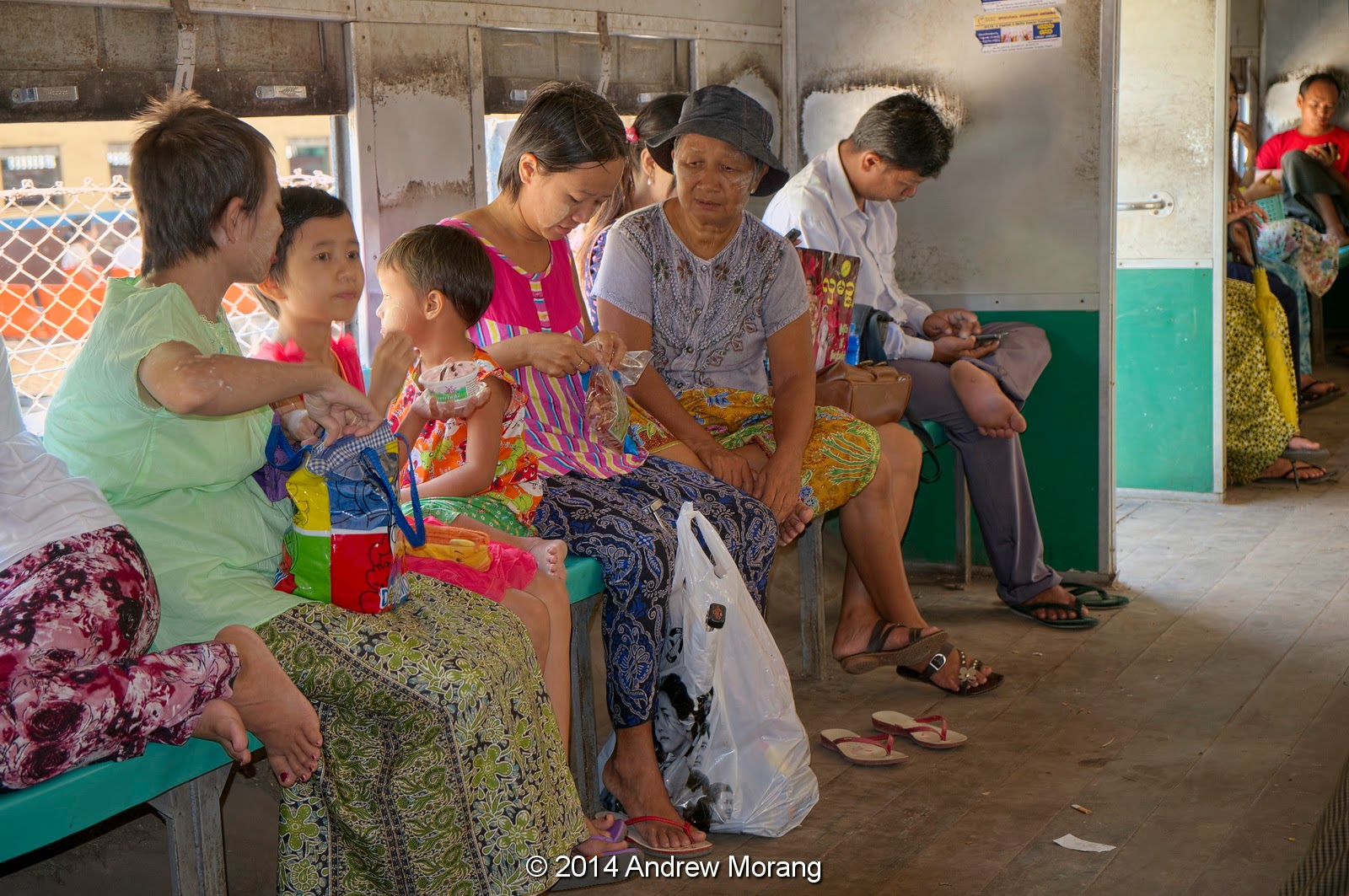 Best of all might be your fellow passengers. They must see enough tourists now such that we are not curiosities any more. The lady above had some sort of sweets, like doughnuts. She bought them somewhere and used the train to reach her selling area. 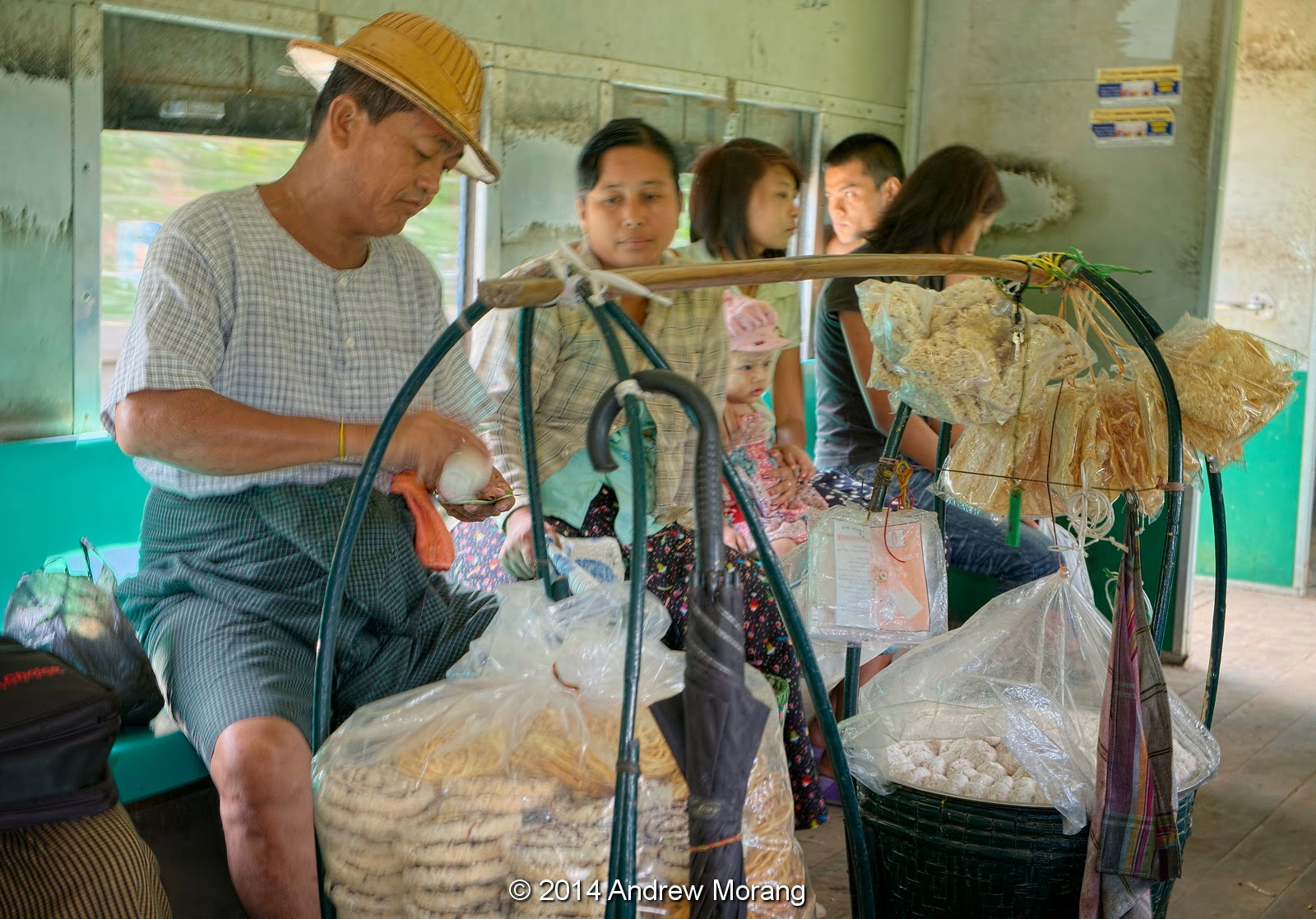 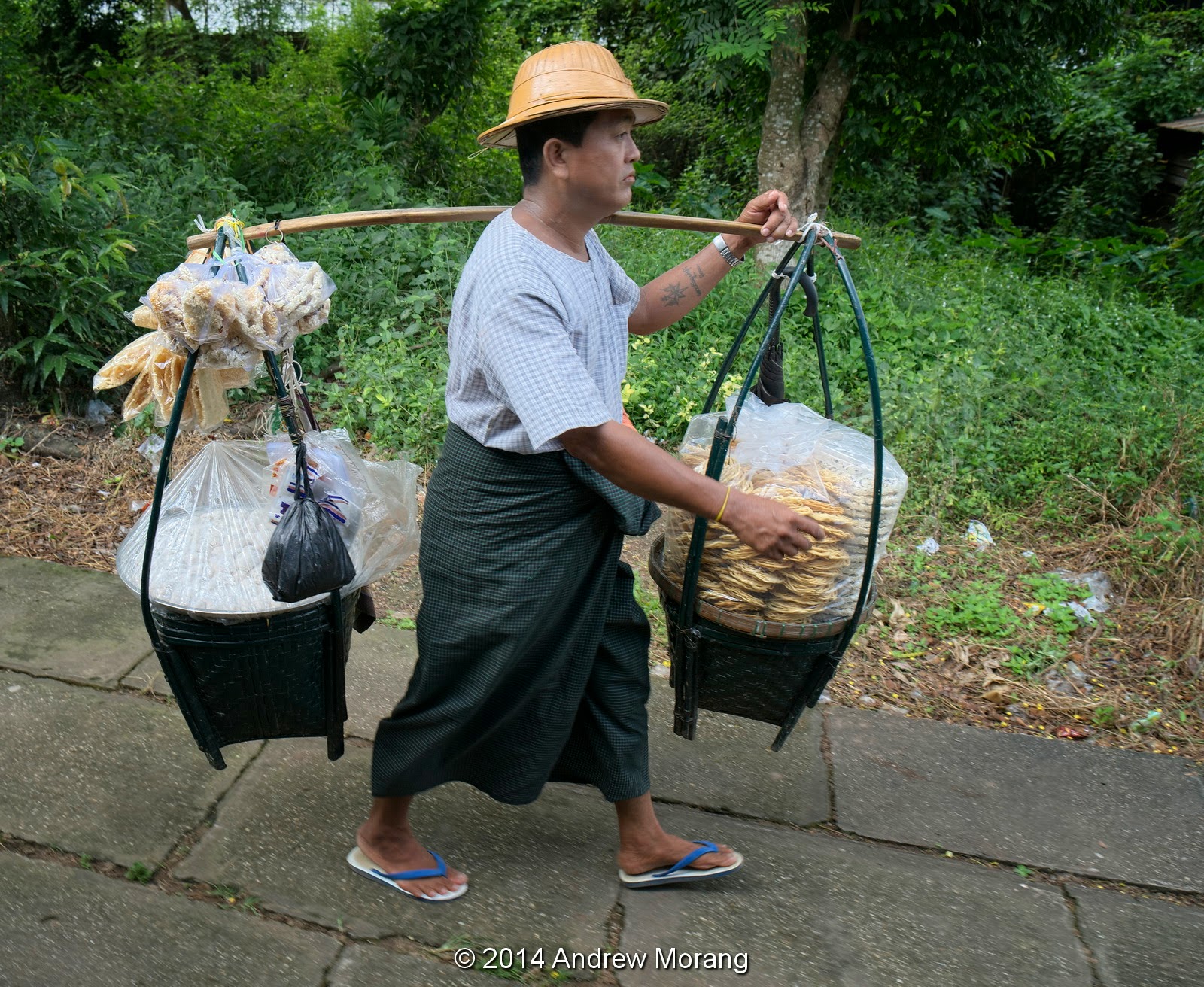 This gent also had some sort of sweets in his tubs. Notice his outfit. He is wearing a cotton longyi, used almost universally by gents and ladies in Burma, and flip flop shoes. On his head is a bamboo leaf pith helmet. In northern Burma, these bamboo hats are are often coated with crude oil to protect the fiber (and add some aromas?). 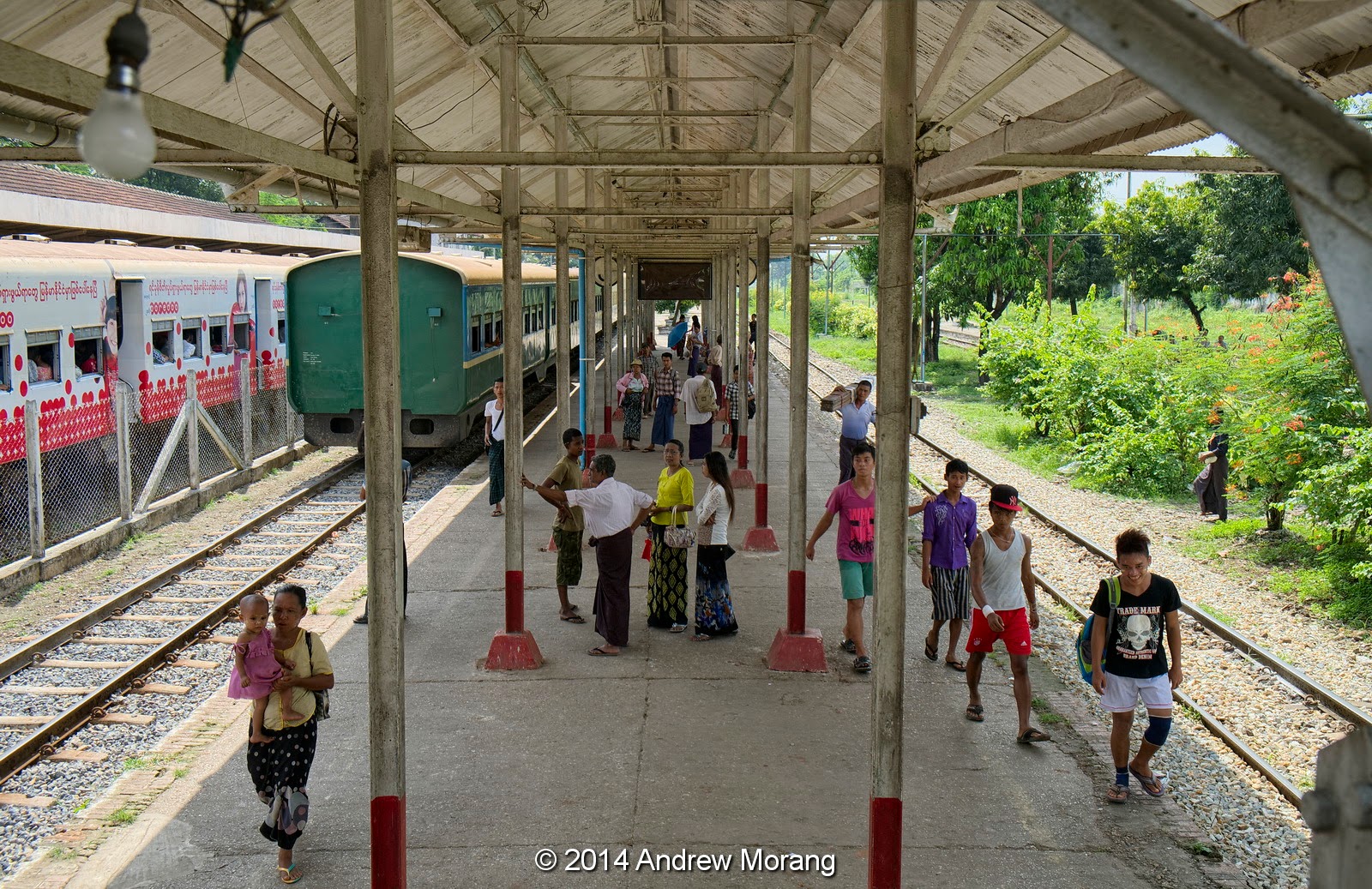 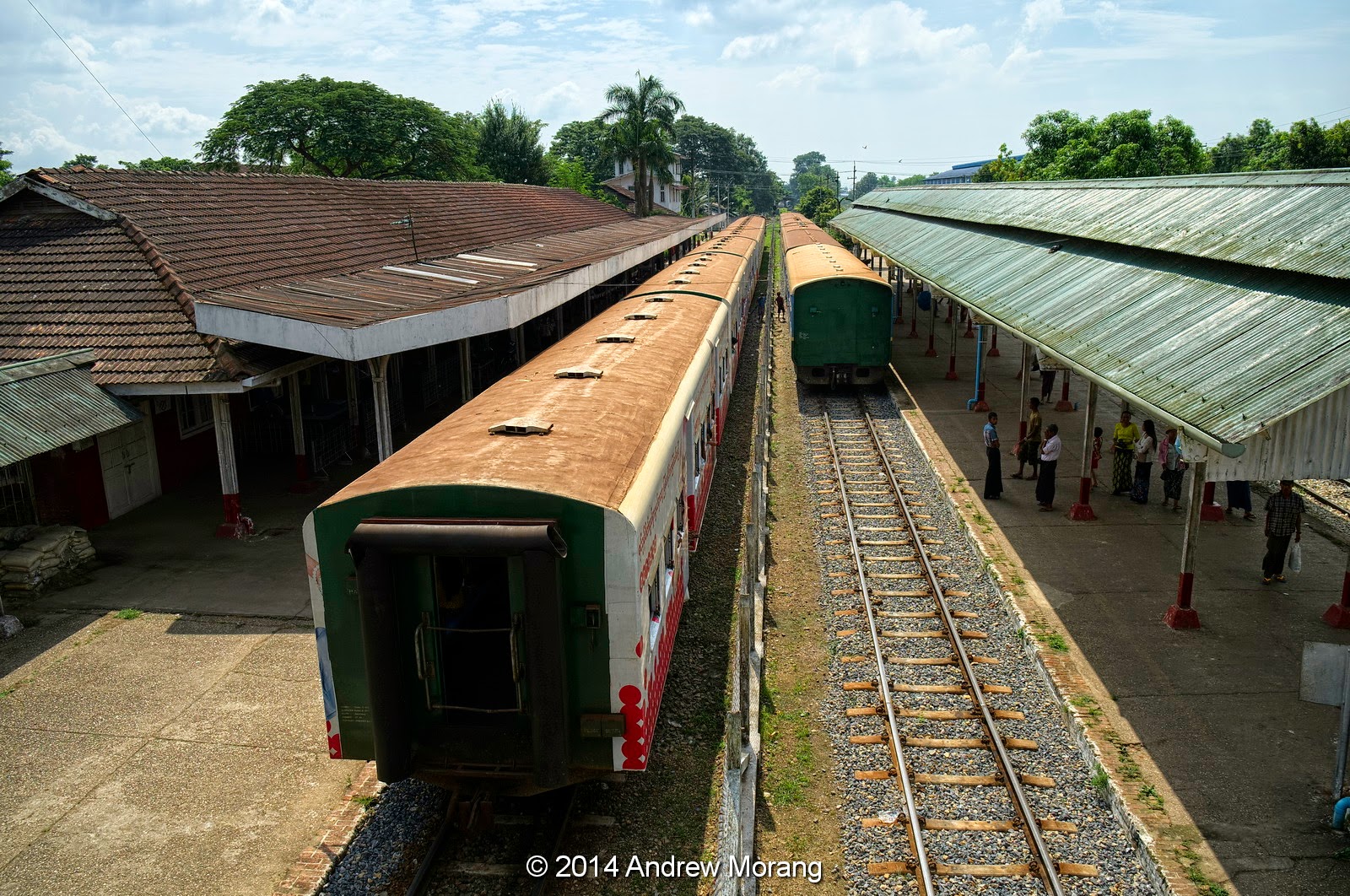 If you do not want to take the full 3+-hour circle, one option is to get off at Insein Station, in the northern suburbs. Near the river in Insein is a British-era prison, infamously used by the military government for political prisoners. Insein is about a half-hour taxi ride to downtown Rangoon. 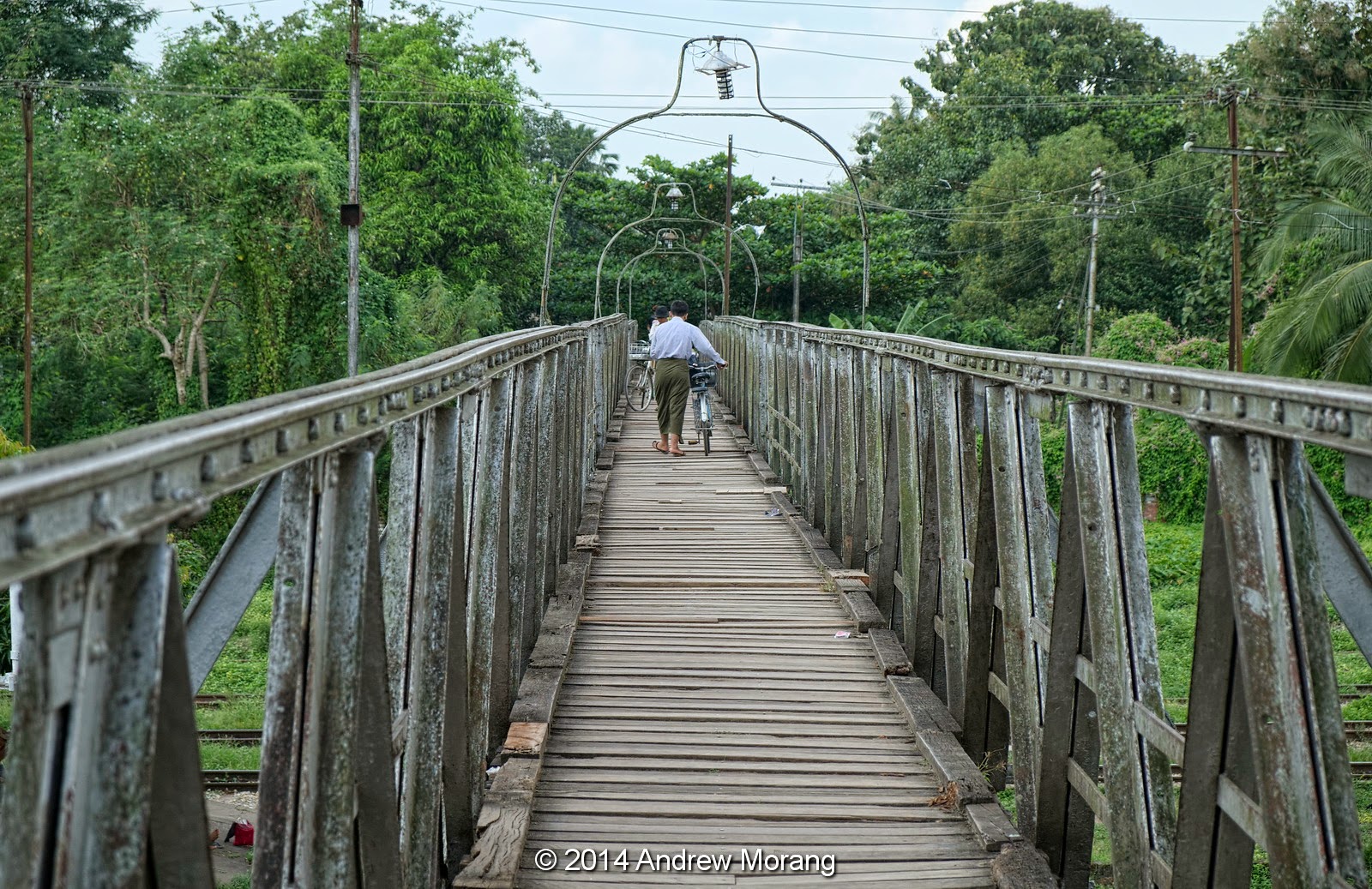 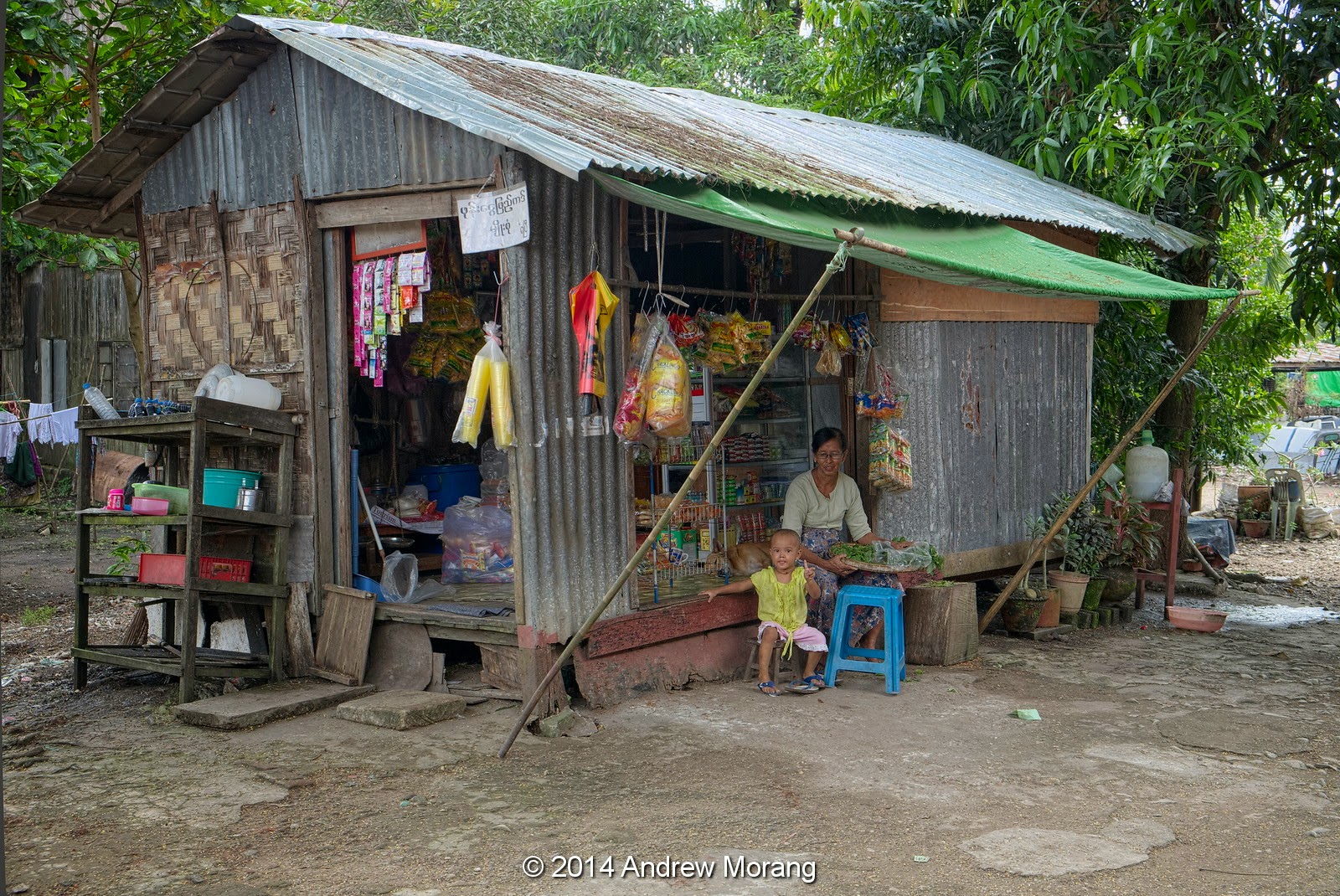 A steel bridge crosses the tracks, and several shops are clustered around the station. A fellow who crossed on the bridge helped us flag dona a taxi and negotiate the price. That is an example of the Burmese people: friendly and gracious.

The Circle Train is great fun! Take it.

The Myanmar Times has an article on upgrading the Circle Line. The Irrawaddy describes the Japanese-built air-conditioned train (the one we did not try).

Photographs taken with a FujiFilm E-E1 digital camera with RAW files processed in PhotoNinja.
Posted by Kodachromeguy at 15:25