In the previous post, we started on the Rangoon Heritage Tour. Let's continue down Pansodan Street south towards the Yangon River. During the colonial era, Pansodan Street was one of Rangoon's major commercial thoroughfares. Many of the great commercial firms built their offices along this street. The architecture was bold, solid, and strong, meant to project the power and success of these fabulously wealthy concerns. Walking here, you might almost think you were in London (except for the tropical climate and a degree of dilapidation and mildew). 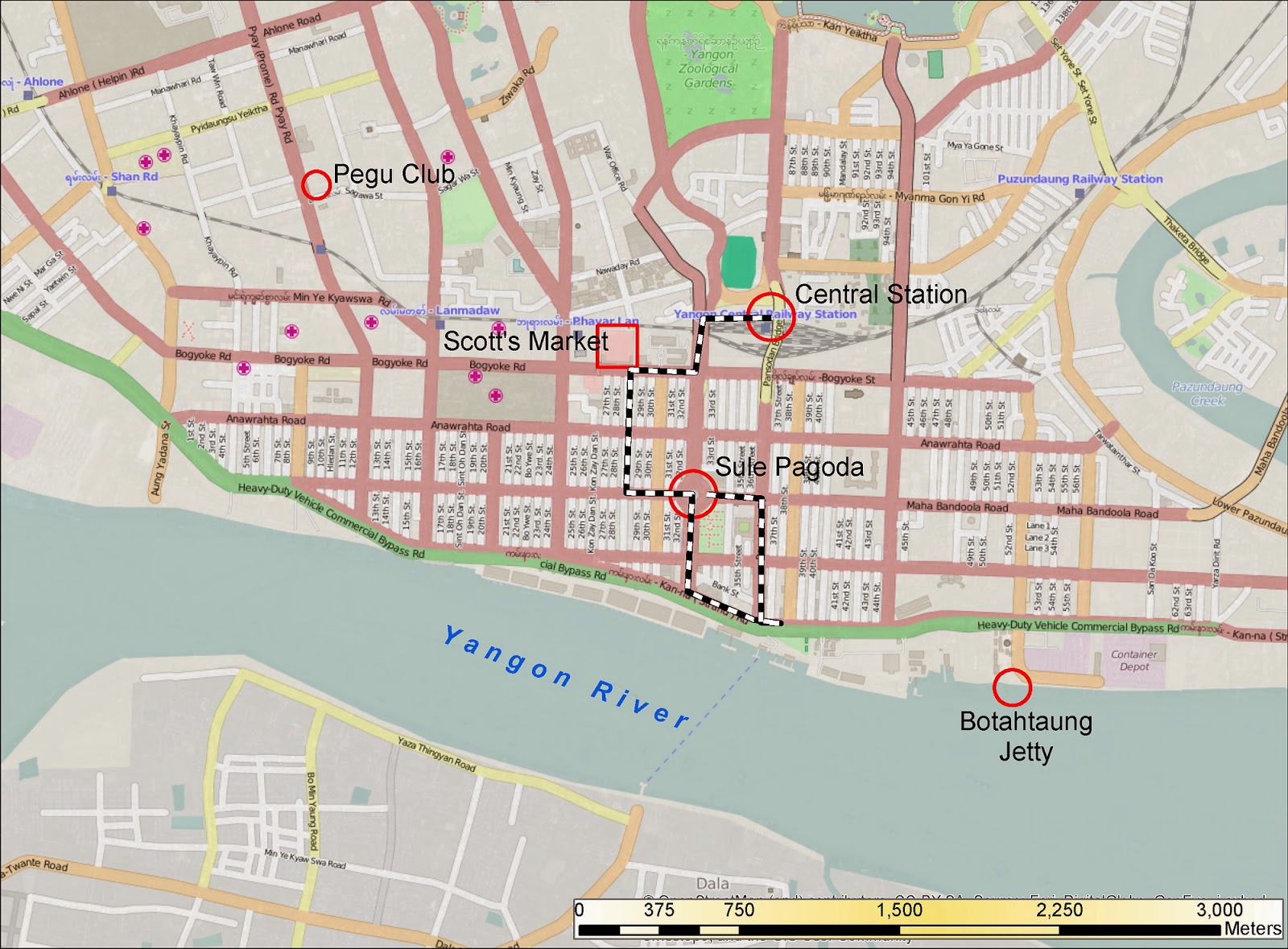 Rupert-Angus Mann (2014) wrote about Rangoon in M My Magical Myanmar:


By 1900, Yangon’s tree lined streets channelled a huge diversity of cultures through what had become one of the great cosmopolitan centres of the region. A brief walk around the downtown of Yangon today will reveal the incredible and enduring diversity of its cultural makeup. Churches of all denominations such as Baptist, Jehovah’s Witness, Lutheran, Methodist, Chinese Methodist, Presbyterian, Catholic and Anglican sit alongside Hindu, Sikh, Jain and Parsi temples. Sunni and Shia mosques, Buddhist temples, pagodas, prayer halls and monastic complexes such as Thayet Taw peacefully co exist. The breadth and diversity of religious practice seen in the downtown’s one square mile is remarkable.

During the early 20th Century Yangon’s port was the second busiest port in the world just after New York. Hundreds of thousands arrived at the docks and stepped into an exciting metropolis. People such as Mahatma Gandhi, George Orwell, Rudyard Kipling, Somerset Maugham, Pablo Neruda, Ulysses S. Grant, Herbert Hoover and many others all spent time here.

Paul Theroux (1971) noted the grand architecture in his 1971 article in The Atlantic.


The decrepitude of the buildings in Rangoon is almost grand. The surfaces are shabby, but the shapes are extravagant, and the workmanship is obvious (Corinthian columns support one veranda; another, very graceful, is of wrought-iron lyres); their dereliction has splendor. Some have spires and others a score of ambitious balconies with pockmarked balusters or flowery balustrades, peeling yellow shutters, and lines of motionless wash hung out to dry—the clotheslines strung from the blossom of a cornice to the studs of that ornate pillar. Dates and names are given in medallions at the top of each building: 1903, 1914, 1922, 1927; Irrawaddy Chambers, Dawson's Bank, and The Chartered Bank (both painted out but legible). 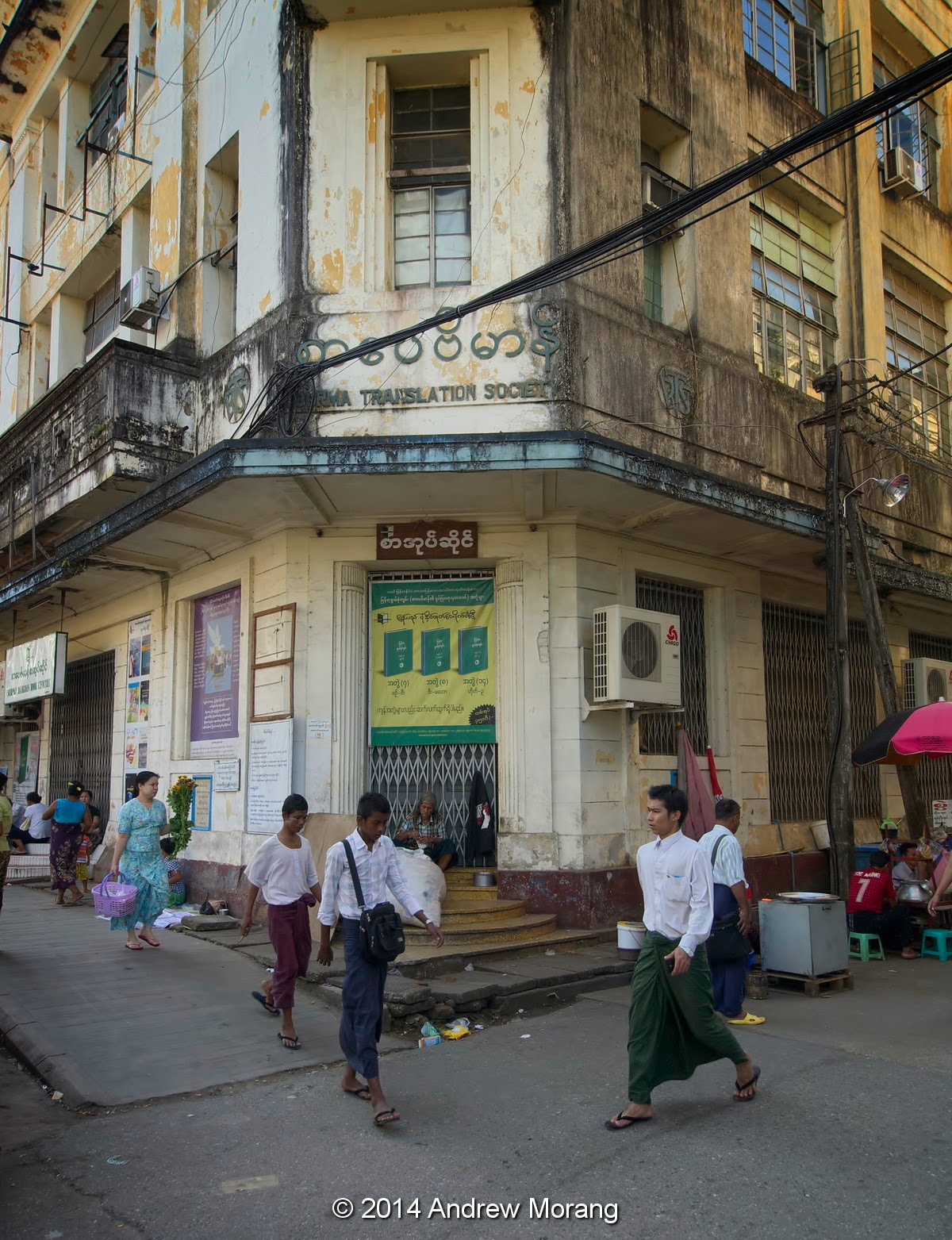 The Burmese Translation Society (or Sarpay Beikman, literally "Palace of Literature") occupied this building in 1947. The goal of the society was to translate great world literature into Burmese and to encourage Burmese authors. Many early politicians encouraged the effort, such as former Prime Minister U Nu, who was an enthusiastic promoter. U Thant, United Nations secretary-general in the 1950s, won an award for his translation of Robert Browning’s ode, “The Pied Piper of Hamelin.” The society never achieved as much as it wanted, but it remains open and funded by the government. 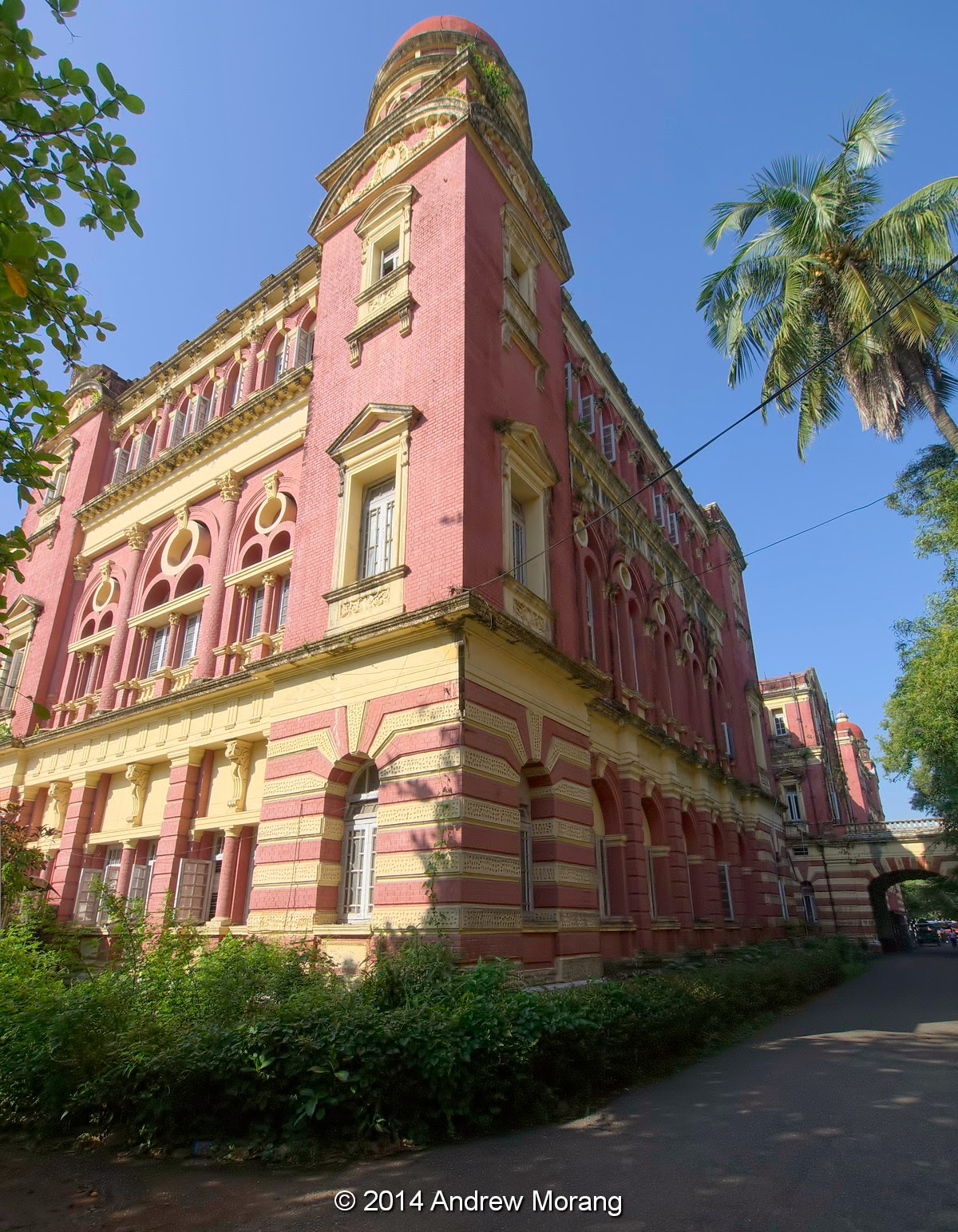 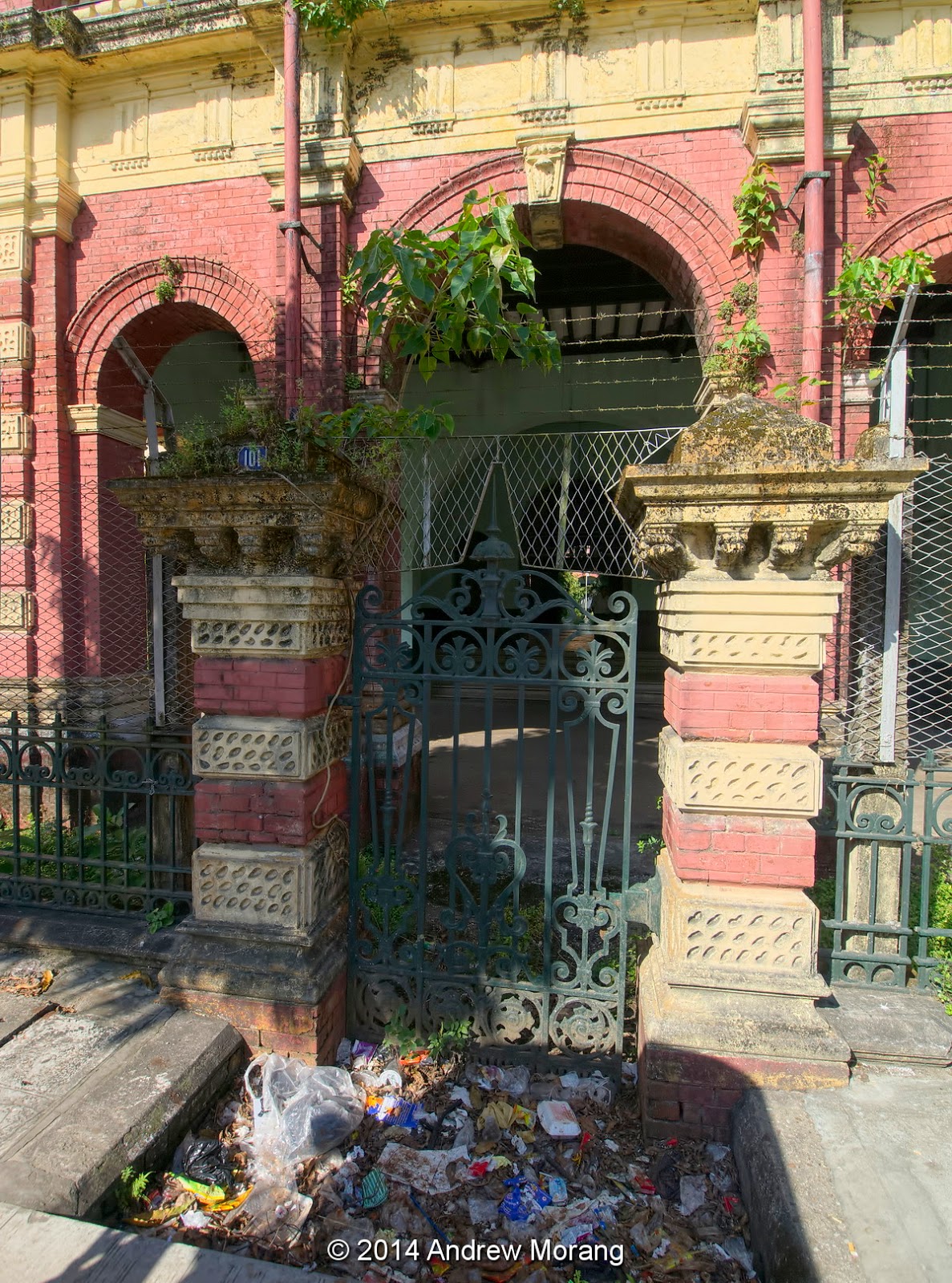 The High Court building is a handsome Queen Anne-style red brick building, occupying much of a city block. It was designed by architect James Ransome and constructed between 1905 and 1911. It formerly housed the highest appeals court of Myanmar, but the court moved to the new capital in Naypyidaw in 2006. I tried to casually walk into the grounds, but a guard politely indicated no. 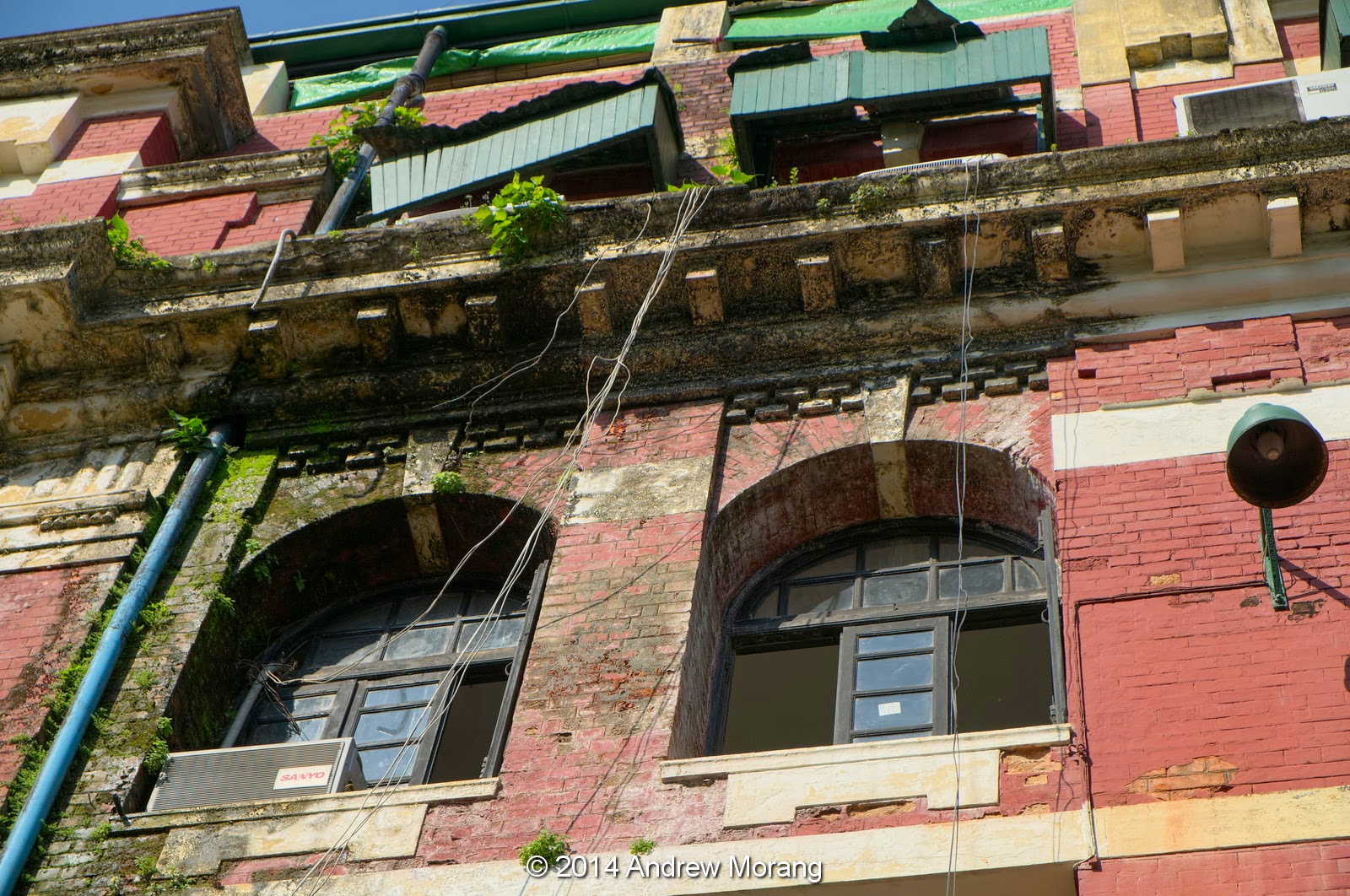 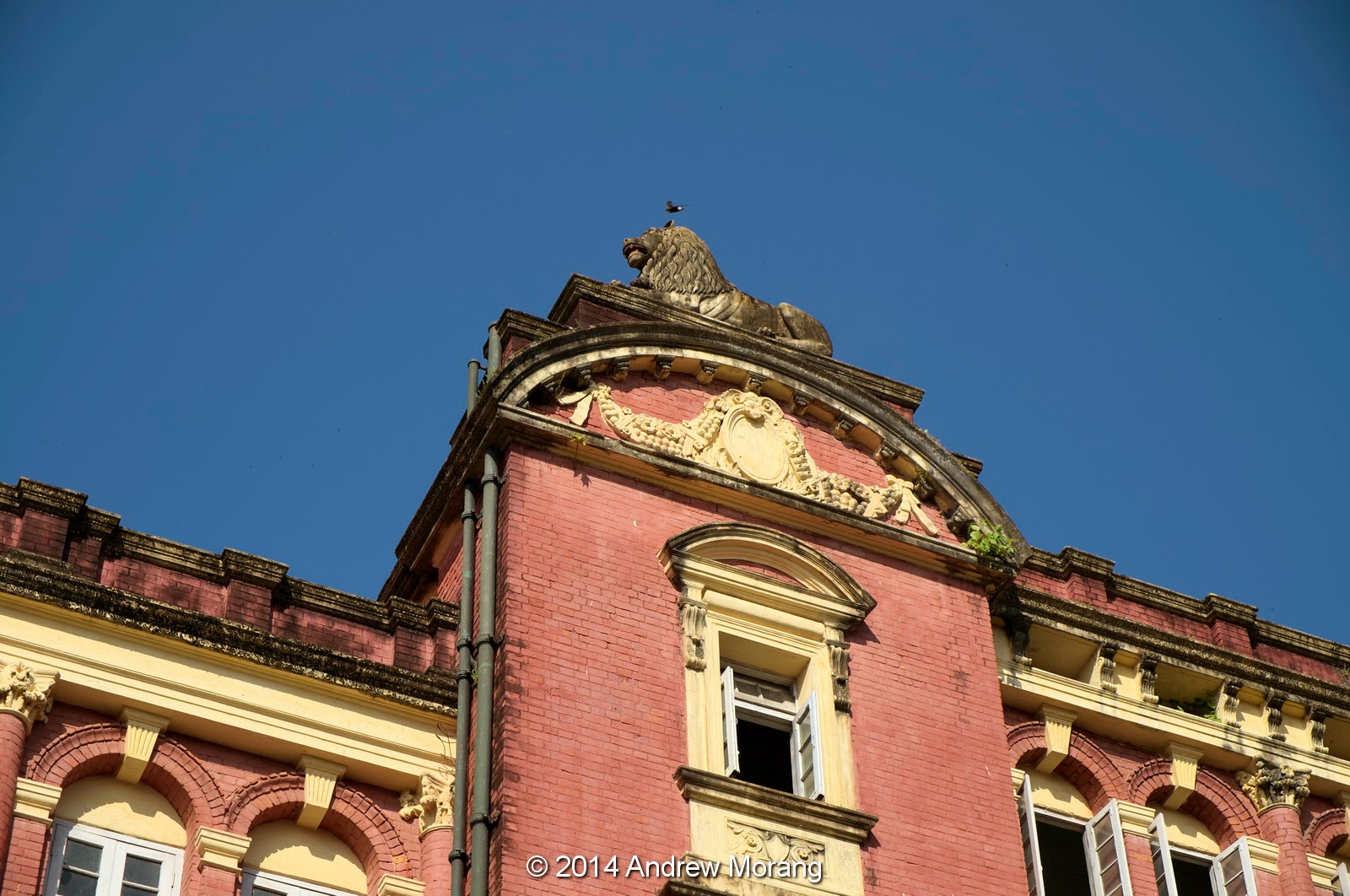 The British Lion still looks out over the empire from one of the towers. The building was an amazing architectural achievement, but needs a lot of work. 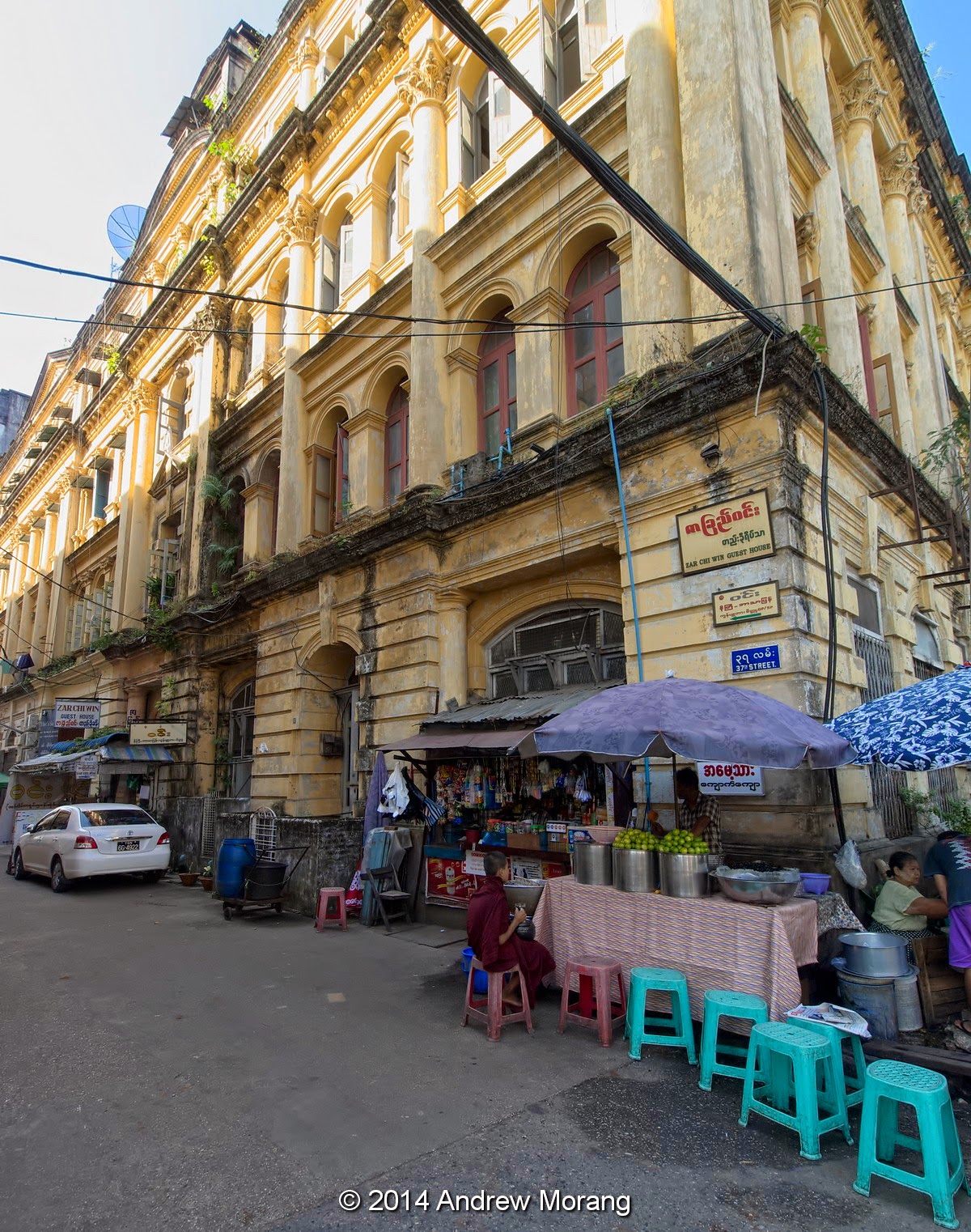 One of the most famous buildings on Pansodan Street was Sofaer & Co., named for the Sofaer family, Jewish merchants from Baghdad (another example of Rangoon's cosmopolitanism). In its heyday, the Sofaer building housed shops that sold imported liqueurs, cigarettes, fashions, and even ice cream. It housed a Viennese coffee shop and the Reuters news agency (The Economist, 2014). The wealthy had their parties catered by the specialists at the Sofaer. Cernea (2007) wrote a fascinating description of Baghdadi Jews in Burma in the early 20th century. 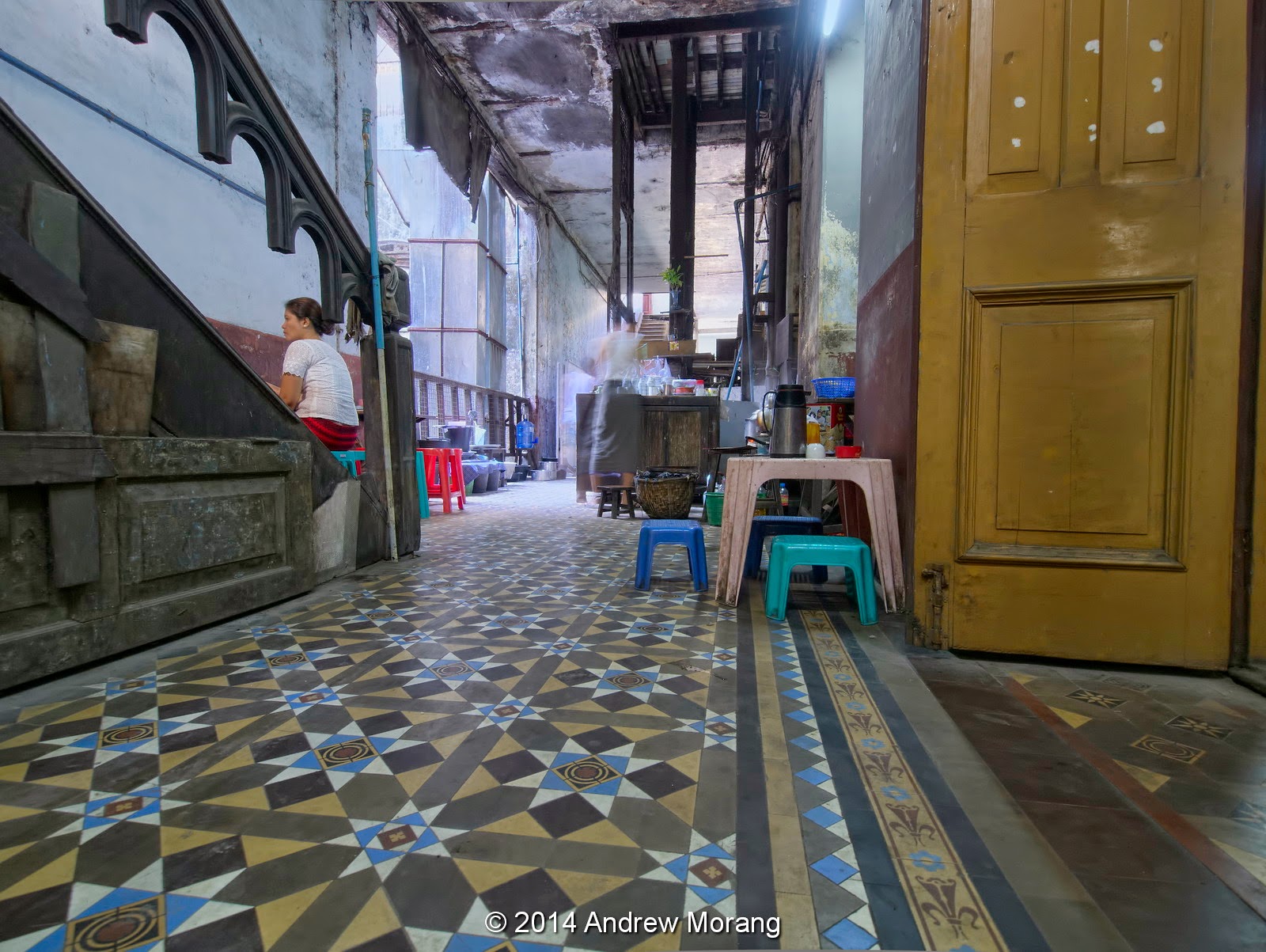 The building is dark and smelly now, but I walked in one of the entrances, and no one seemed to care or even be particularly curious. This must now be a regular destination on the alternative tourist route. There is a tea shop on the second floor. I am not sure if these people are squatters. Look at the handsome floor tiles. 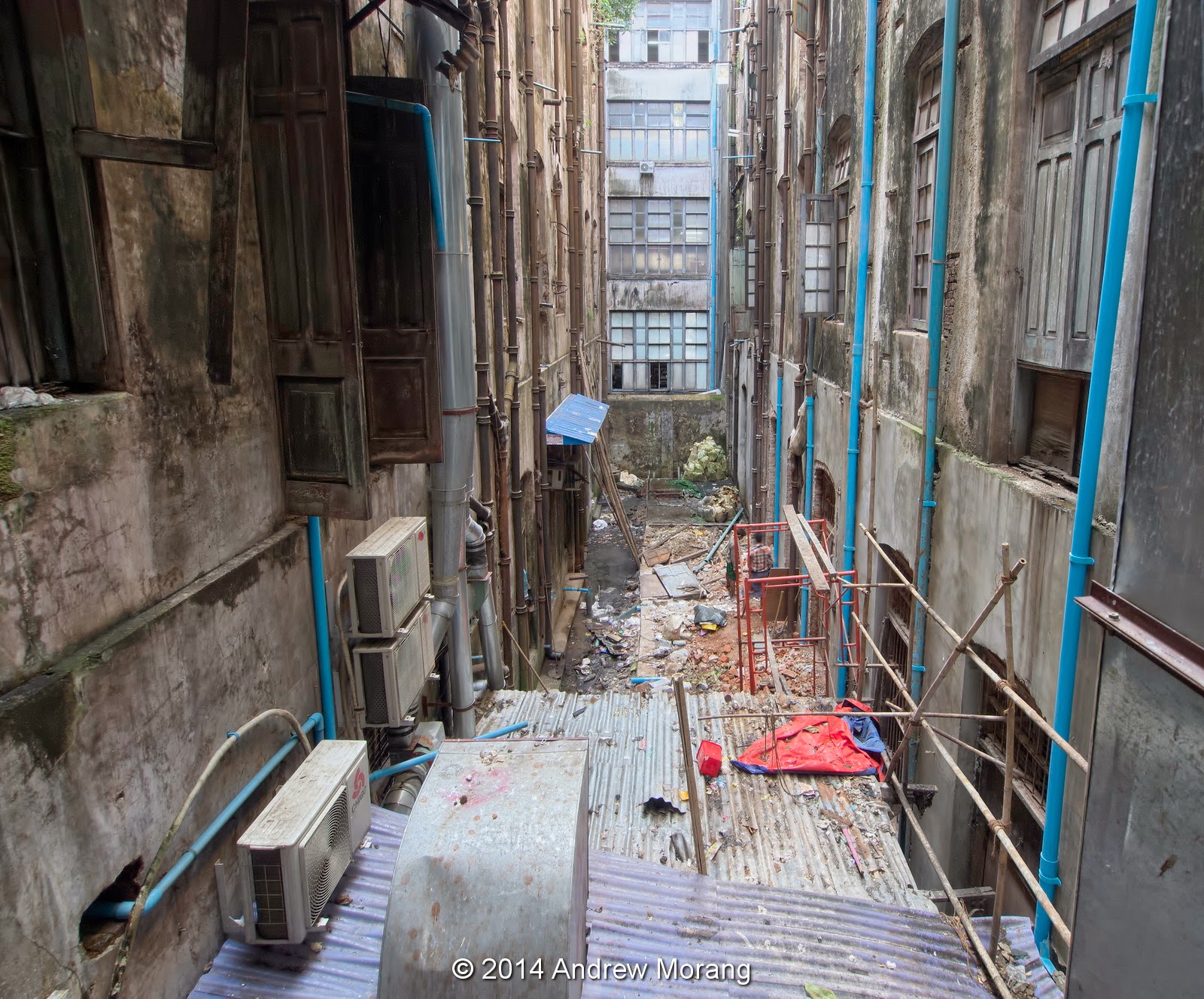 The central courtyard has some brick work in progress. And the new blue sewer piping suggests some degree of maintenance. Regardless, it would be staggeringly expensive to renovate. I wish I had had time to go to the third floor. 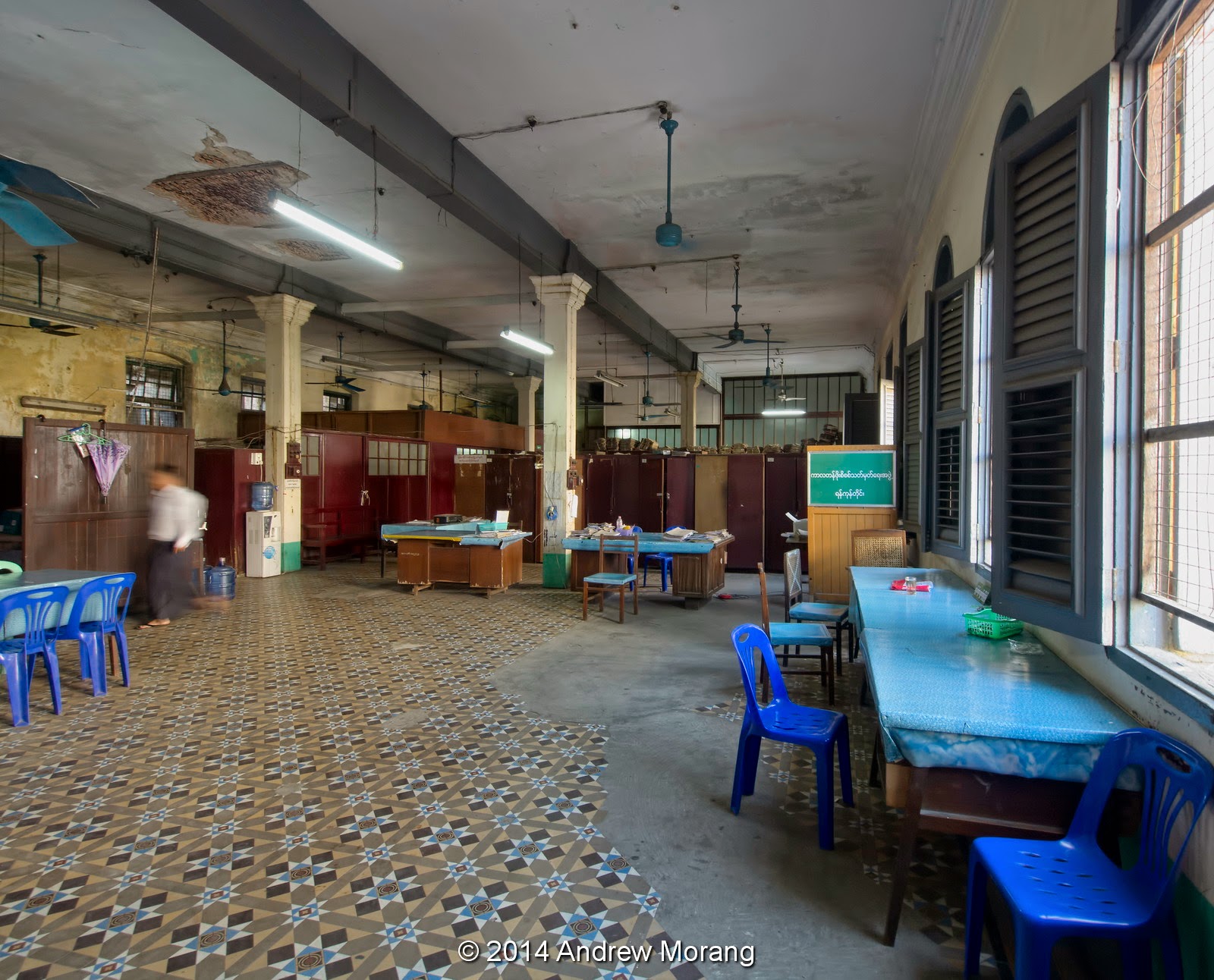 On the west (Pansodan Street) side, there is an office in use. 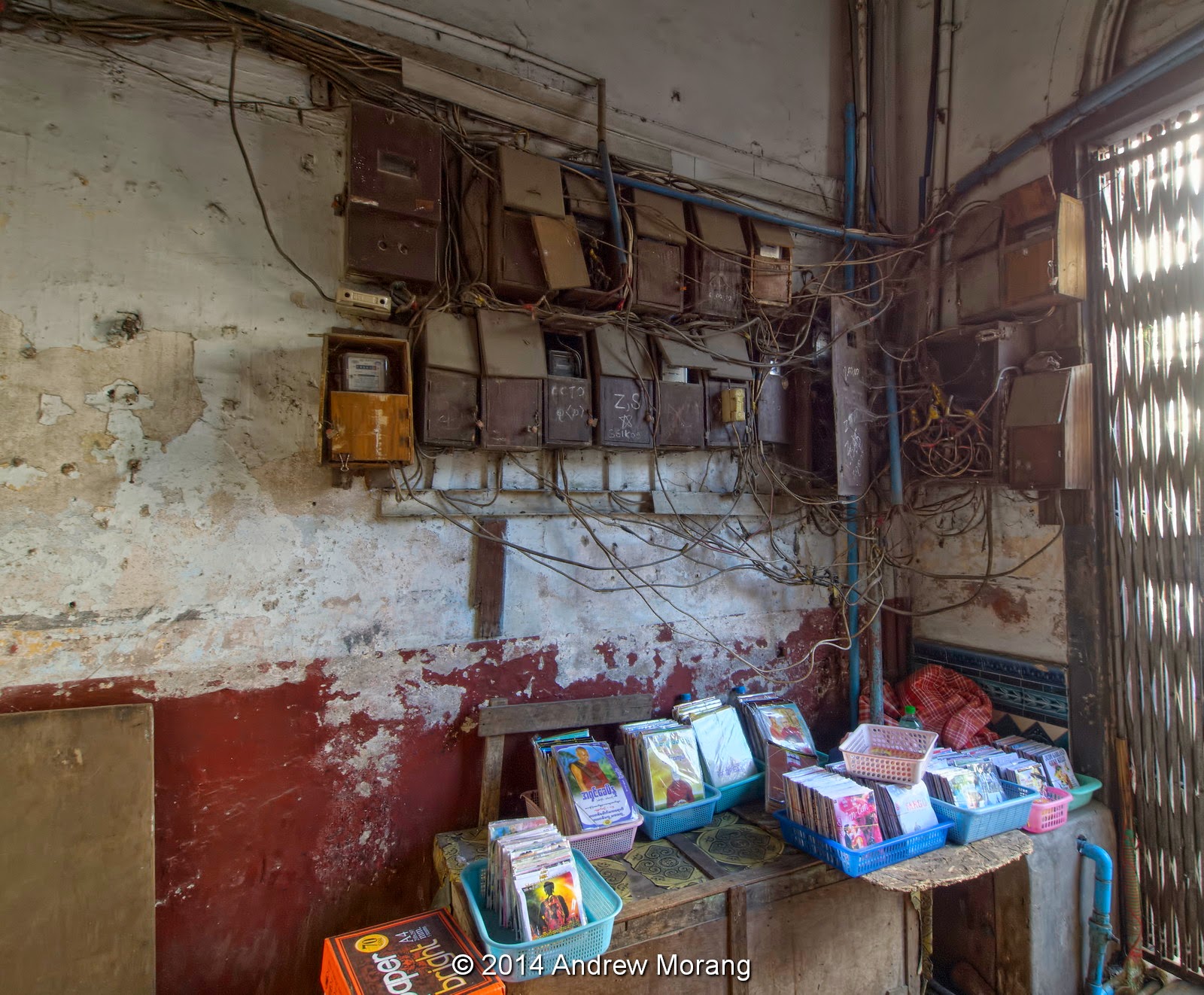 The electric service is a bit questionable. 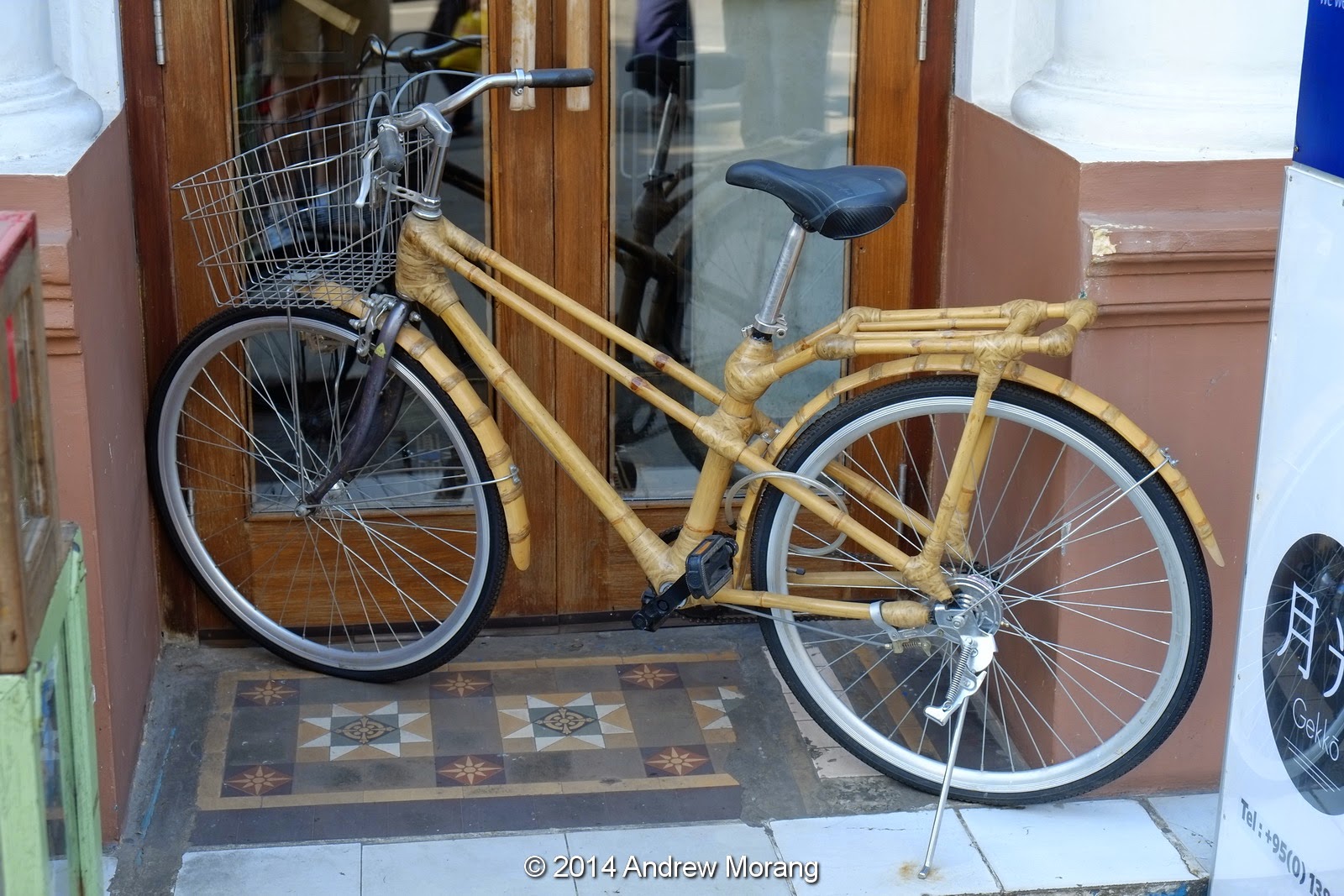 There was a new bamboo bicycle in one of the doorways. 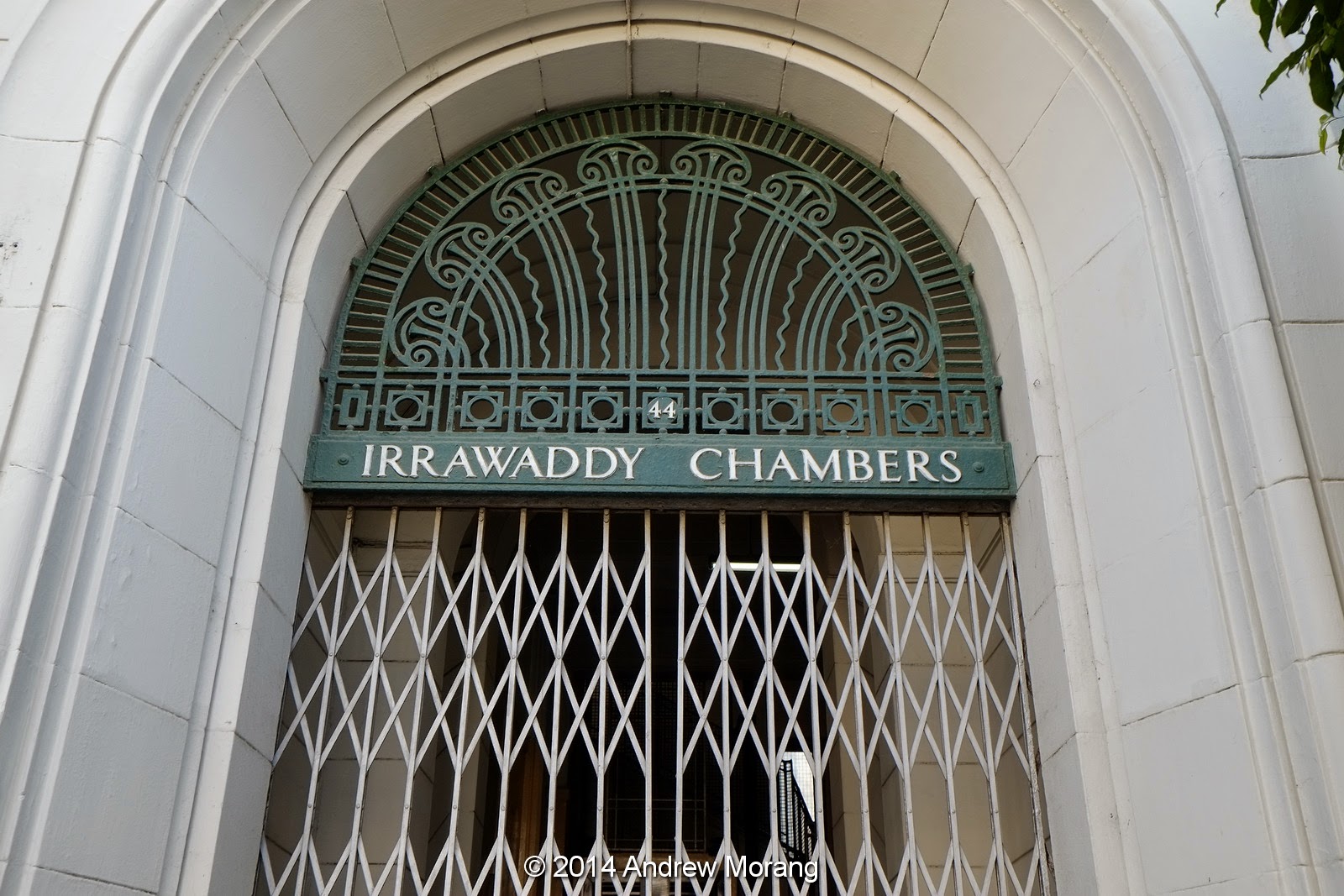 This elegant gate leads to the Irrawaddy Chambers, formerly the offices of the Irrawaddy Flotilla Company. Founded in 1865 by Scottish merchants, by the early 20th century, the Flotilla's steamboats served much of Burma, carrying millions of passengers per year and valuable cargoes of teak and other bulk materials up and down the Irrawaddy. Kipling wrote,


"Come you back to Mandalay,
Where the old Flotilla lay;
Can't you 'ear their paddles chunkin'
From Rangoon to Mandalay"

Before World War II, the Flotilla's fleet of 600 vessels was one of the largest in the world. The vessels were scuttled to prevent their falling into Japanese hands. Many of the wrecks are still in the river.

Half a block further south is the Yangon Heritage Trust, at 22-24, Pansodan Street on the second floor. They have an active program to advocate for historic preservation and reuse. The waiting room has a fine display of historical photography. They had a clean toilet (relief) and offered us cold water (more relief). 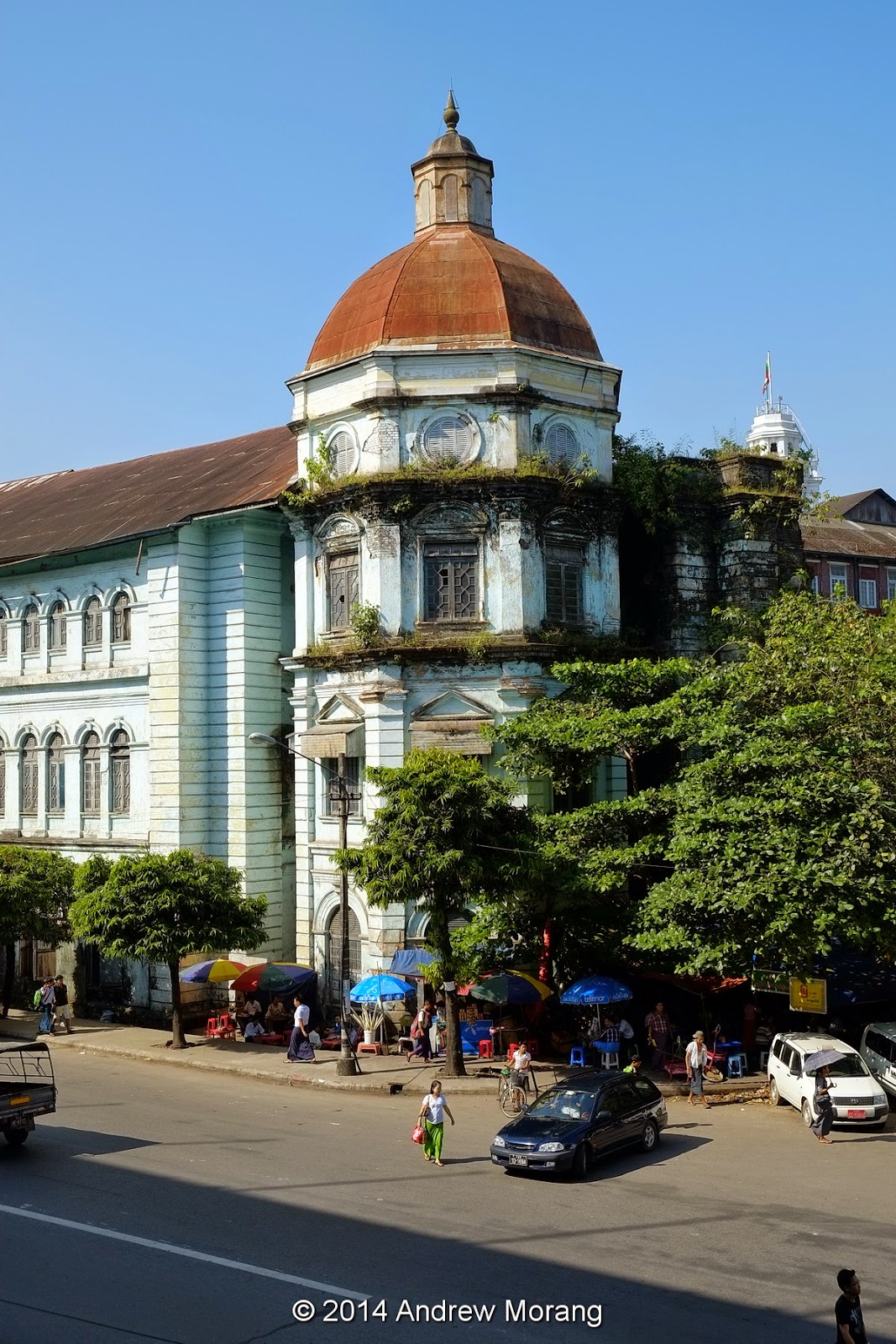 This is the corner of the Accountant-General's office. During the colonial era, the Accountant-General was responsible for collecting all revenue in Burma, which then was  opium, salt, and teak. The back of the building (to the right of the tower) was bombed by the Japanese at the beginning of World War II and never rebuilt. Clearly, this is another gem in need of tender loving care. This is the view from the Heritage trust's window.

At the end of Pansodan Street, you reach the Strand, which now no longer has a waterfront view because of the high walls surrounding the cargo terminals. And the traffic is horrendous. So turn left and go have a coffee in the historic Strand Hotel. It has the best espresso in Rangoon for now, the lobby is air-conditioned, and the toilets are clean. I stayed in the Strand Hotel in the 1950s for a few months. My mother remembers the mice and questionable food back then. 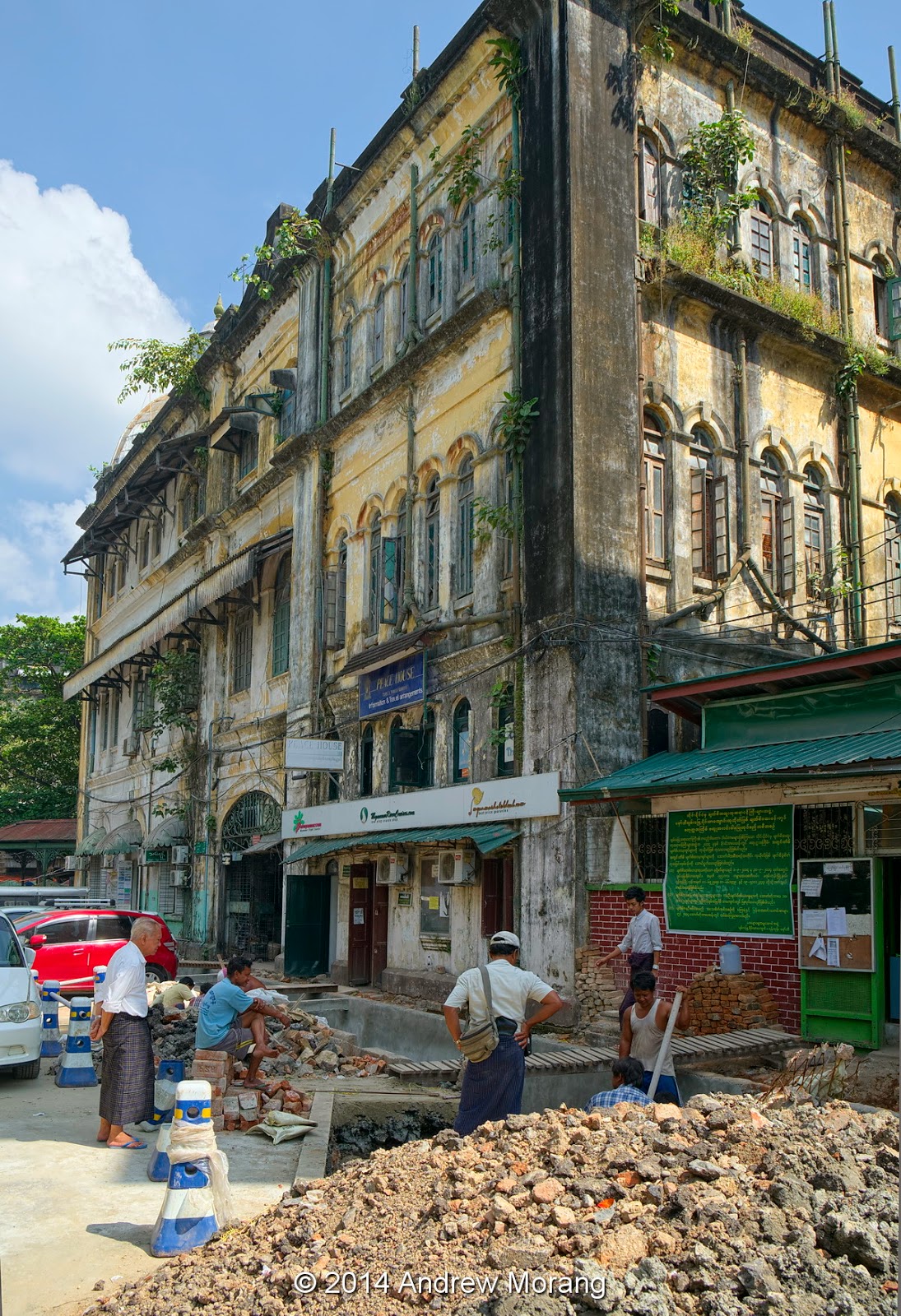 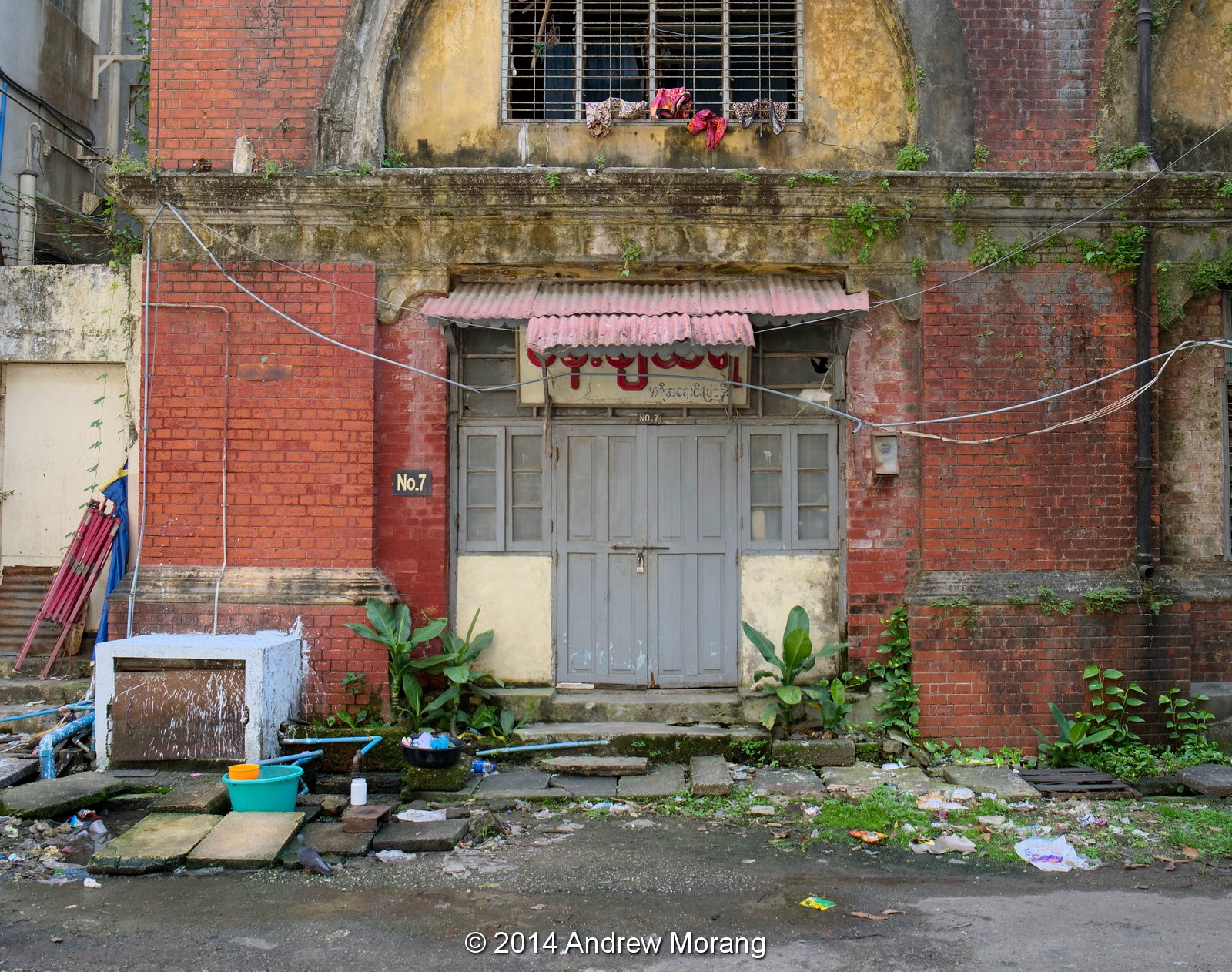 Turn up 37th Street , and you can see some more old British buildings. The workmen in the first picture are rebuilding one of the storm drains. Most Rangoon streets have a storm drain under removable paving blocks. The blocks can be lifted to clean out the drains. (In Kathmandu, the blocks are often missing, so you have to watch out not to fall into one of the trenches.) 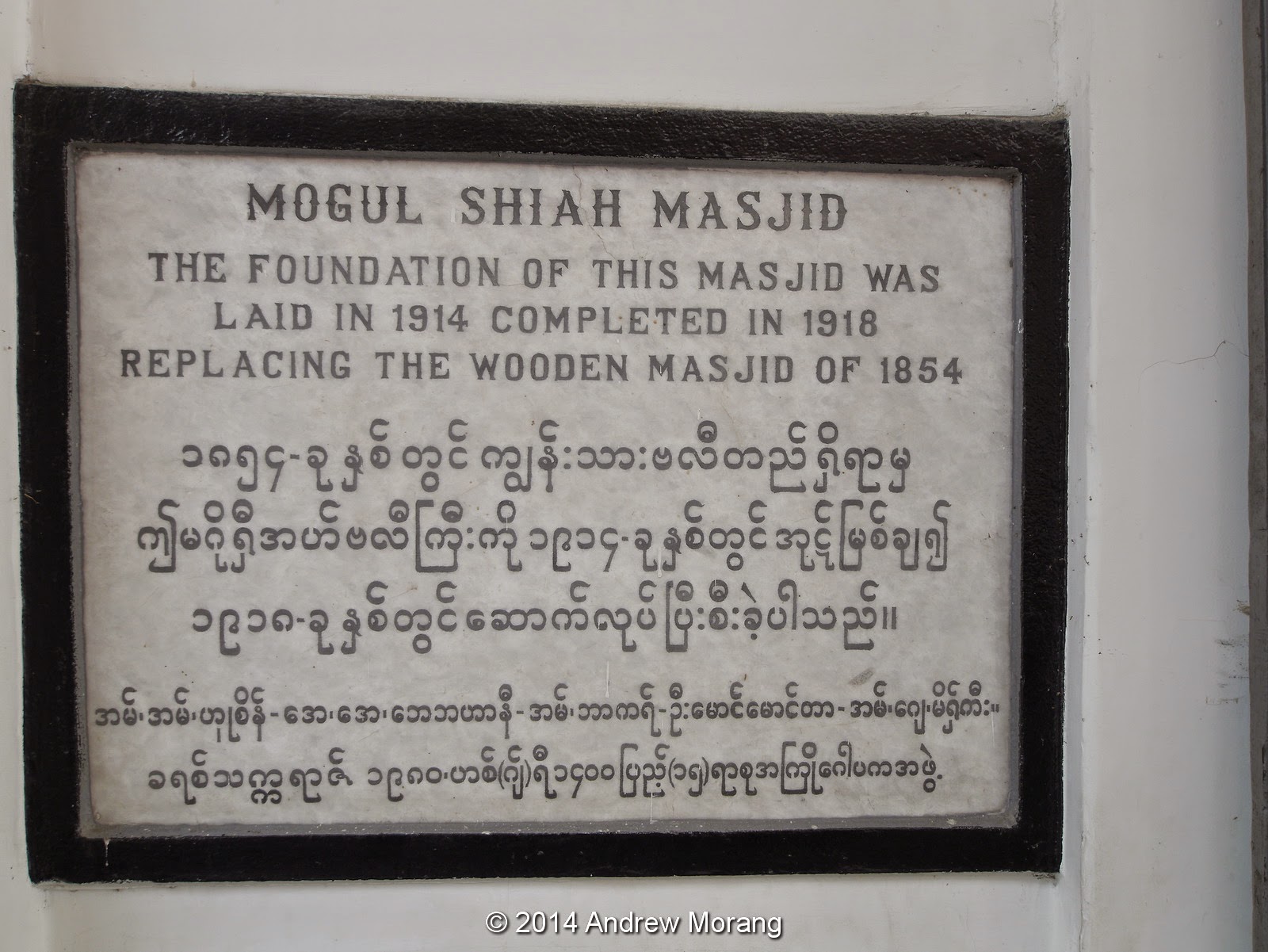 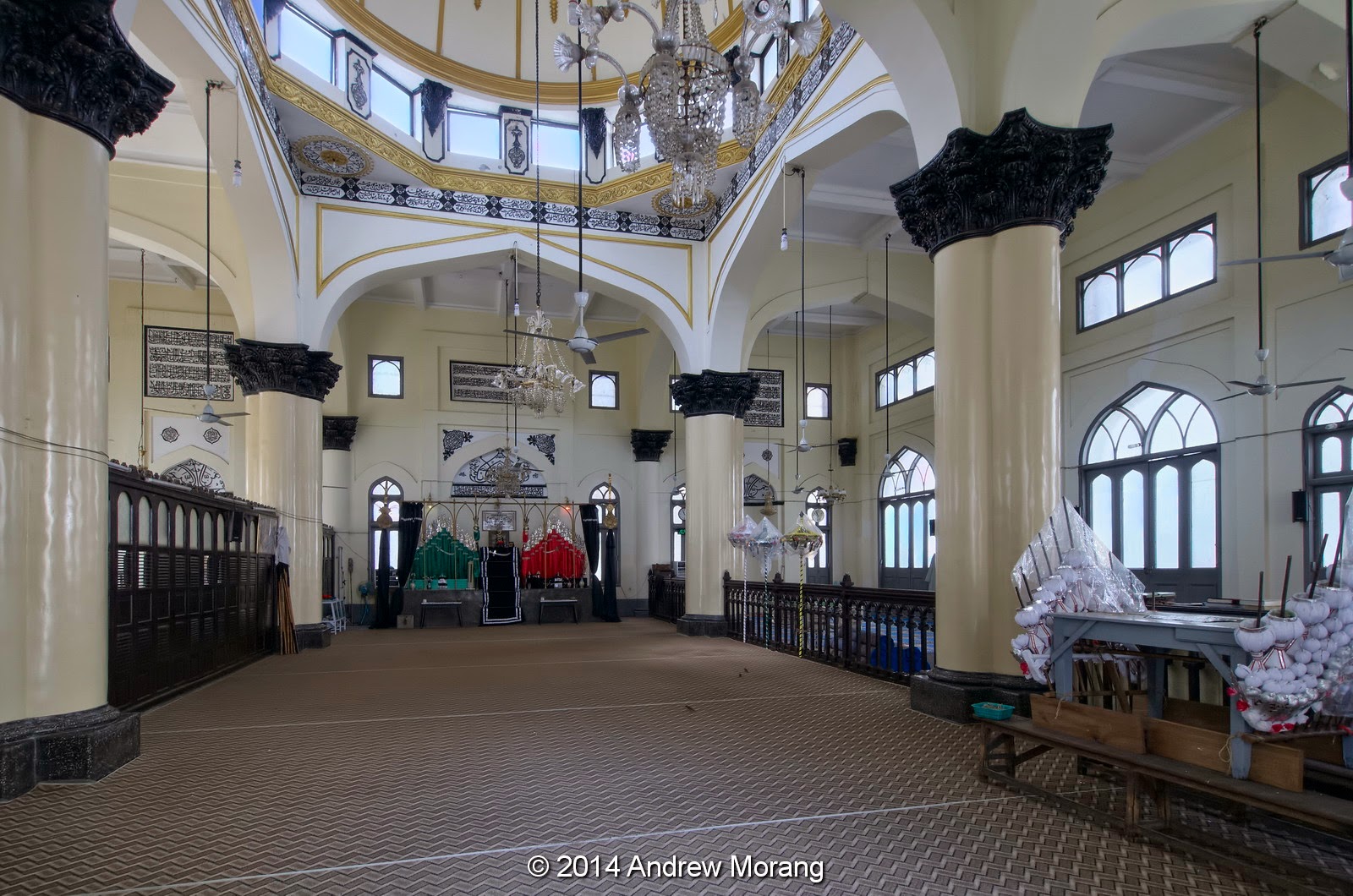 This is the Mogul Shiah Mosque on 30th Street, which may have been founded by the Iranian community. I am not sure if there are many Shia in Rangoon any more, but the ornate building is another testament to the cosmopolitan character of the old capital. 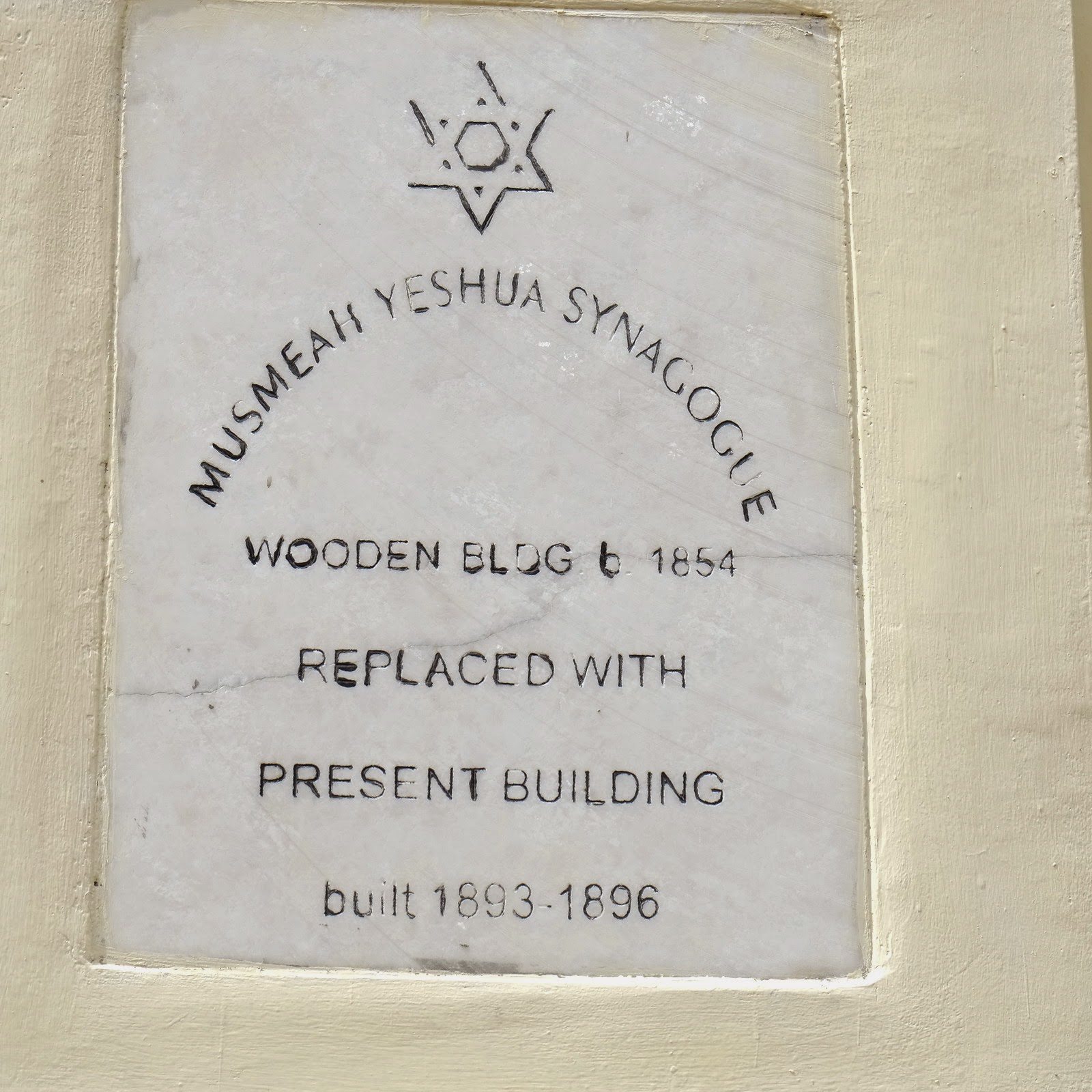 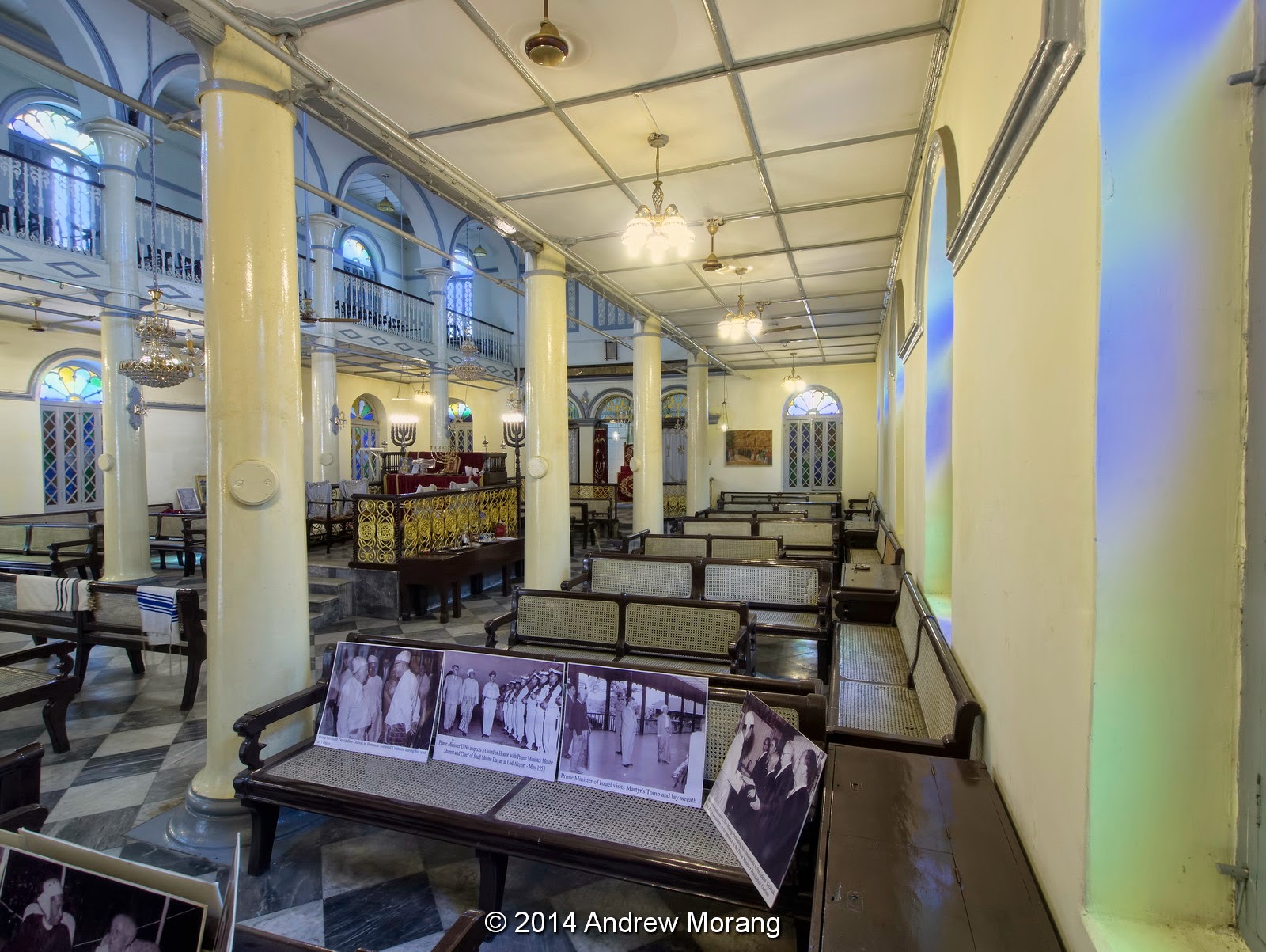 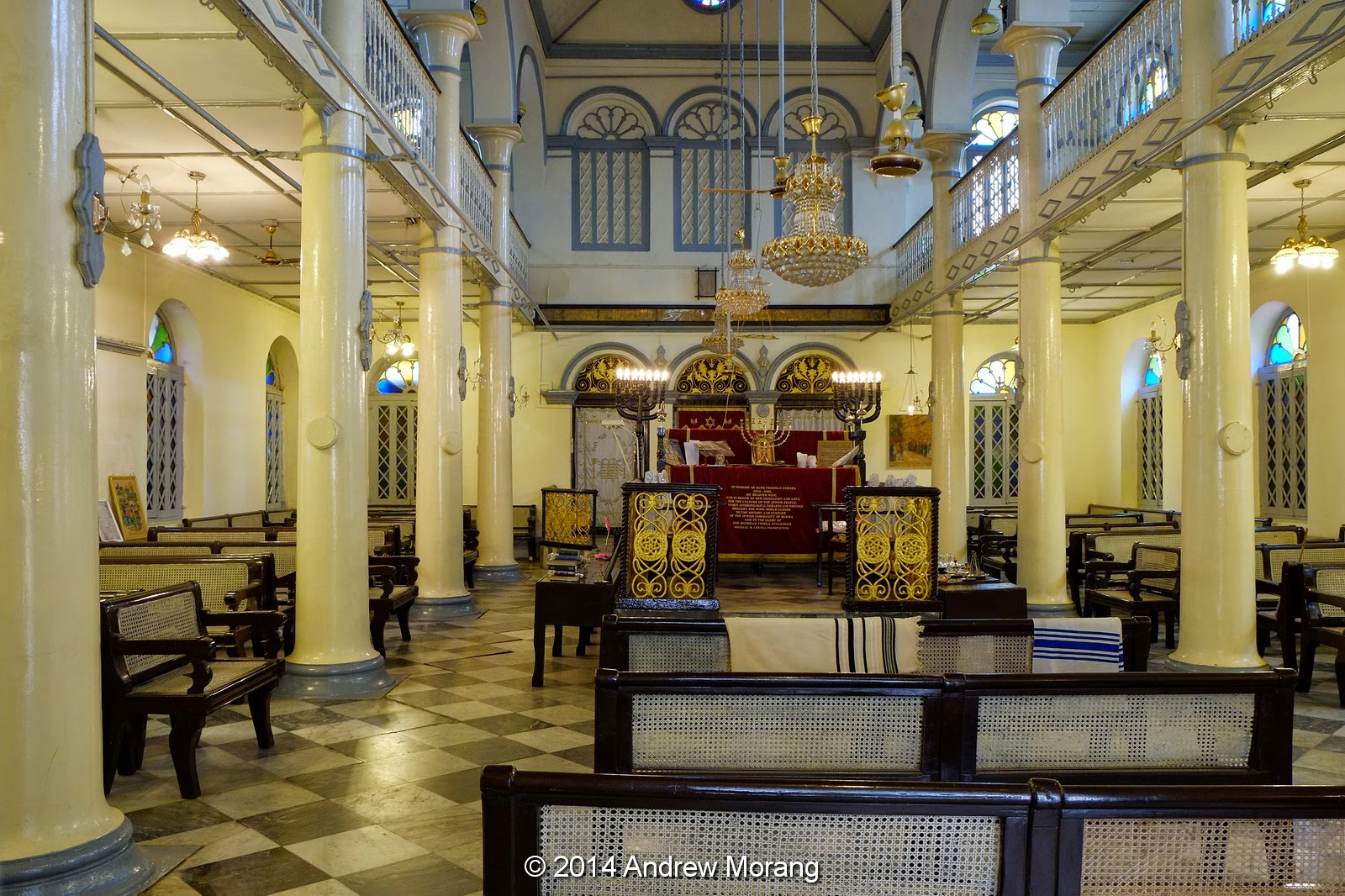 Musmeah Yeshua Synagogue is said to be the last synagogue in Rangoon and possibly in all of Burma. It is located at 85, 26th Street, in a neighborhood occupied by Indian and Muslim merchants. We met the caretaker, Mr. Moses Samuels, who graciously showed us around. He said they have good relations with their neighbors, and when some work needs to be done, the Muslims down the street gladly help out. Early in the 20th century, the synagogue served thousands of Jews who had come from India, but many left when the Japanese occupied the city in World War II. An Economist article discussed the history of this last remaining synagogue.

This article is getting long. We will continue our tour of Rangoon in upcoming articles. Thank you for reading, and if I made some errors, please comment.

Here is a well-written blog on the Yangon heritage tour by a Swiss writer.

Travel + Leisure had a 2012 article on Rangoon's Rich Architecture.

Time Magazine had a 2012 article, "As Rangoon Races Forward, a Push to Preserve Its Architectural Past."

The Irrawaddy described how the "Heritage Tour Offers Insights Into Rangoon’s Illustrious Past."

The Economist described architecture in a 2014 article, "The way the old capital crumbles."

The Economist described "Myanmar’s last Jews, Burma’s bimah, A tale of conservation, faith and a surprising survival" in a 2012 article.

The Financial Times wrote about Rangoon's Forgotten Treasures in a 2011 article.

The wide-angle photos were taken with a Panasonic G3 camera with Olympus 9-18mm lens. The longer views were with a Fujifilm X-E1 camera with various lenses. I processed the RAW files with PhotoNinja software (highly recommended).
Posted by Kodachromeguy at 11:19