In the early 20th century, a narrow-gauge railroad (1-meter gauge?) ran from Kiffisia (a northern suburb of Athens, to Lavrion. At that time, Lavrion was a mining town on the east coast of the Attica Peninsula, a few miles south of Rafina and north of Cape Sunio. According to Wikipedia, the railroad opened in 1885 and was later extended to downtown Athens. Here is an 1888 photograph from Wikipedia Commons (in the common domain):

Today, Lavrion is no longer a mining town. It was rather rough for decades but has rebuilt itself into a popular yachting center with a clean and cheerful downtown. 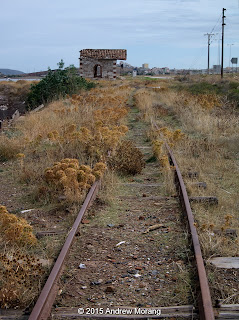 A few weeks ago, I was driving on the coast road and saw this derelict railroad depot in the distance. Of course, it was too good to pass up. 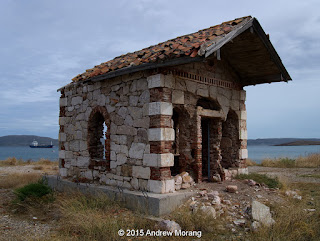 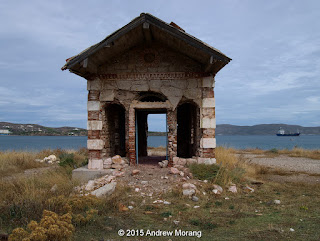 It was just a simple little shed but had handsome stonework. It is architecturally similar to a railroad station in Markópoulo that I photographed in 2012. 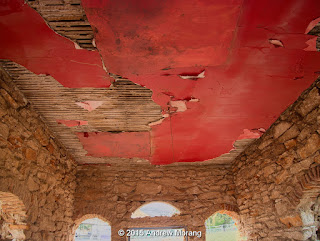 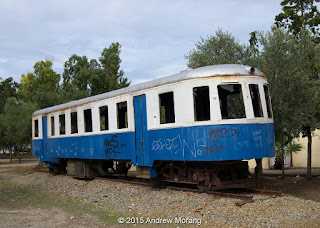 Here is one of the diesel rail busses on a display in the main town. Pity it is deteriorating. 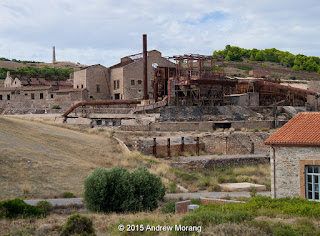 Lavrion was a mining town as long ago as the Classical Era. Athens' wealth was derived from the silver mined here by slaves. These old works are now part of the Lavrion Technological and Cultural Park, operated by the National Technical University of Athens. 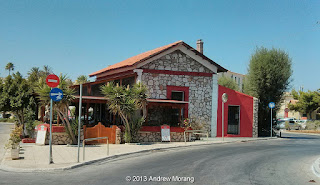 Here is a coffee and pastry shop in another one of the railroad buildings in town. It's a nice way to reuse these sturdy old structures.

The 2015 photographs were taken with a Panasonic G3 camera with 12-32mm LUMIX lens, with raw files processed in PhotoNinja software.
Posted by Kodachromeguy at 18:27