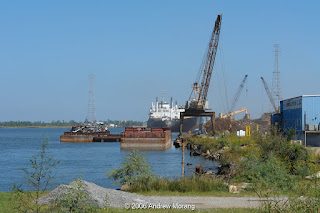 The neighborhood of New Orleans west of the Industrial Canal and along the banks of the Mississippi River is known as the Holy Cross District, named for the historic Catholic school of the same name. This was a subdistrict of the Lower Ninth Ward. Further east or downstream along the Mississippi is the area known as Arabi. The Historic Districts Landmark Commission has an information page on Holy Cross. The photograph above shows the Industrial Canal in November 2006. 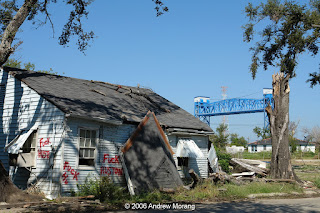 During Hurricane Katrina, the northern part of the Holy Cross subdistrict, the blocks near St. Claude Avenue, were inundated just as severely as the blocks in the Lower Ninth Ward north of St. Claude Avenue. But as you proceed south, the land level rises until it is above sea level near the Mississippi River levees. 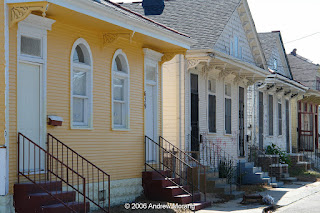 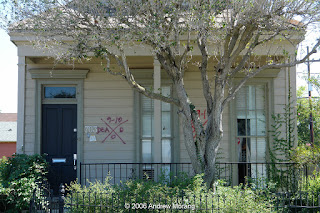 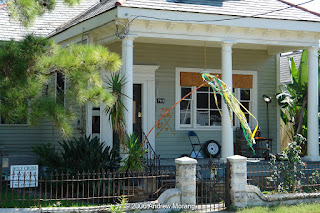 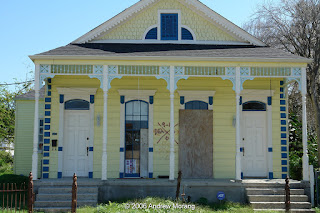 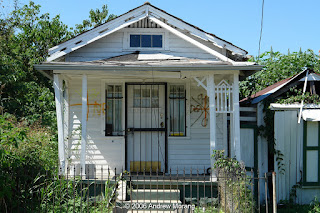 This topographic change was reflected in the architecture. The houses in the north were mostly on slab foundations and were largely post-Hurricane Betsy vintage (1965). But closer to the river, many houses were historic late-1800s wood cottages with typical New Orleans architectural details. These had survived for a century because, during floods, they had either not been inundated or had suffered only minor water damage. Consider the building style: a slab house is right on the ground and doomed if it floods. A post-and-beam house is already two, three, or more feet off the ground, and if it floods, as soon as the water recedes, the water pours out through the floor boards. Most of these older houses in this area were made of cypress planks because the early builders knew that cypress resisted water and rot. 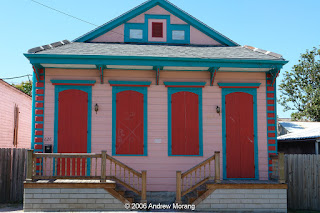 Some of these cottages are quite striking in their simple symmetry and graceful proportions. 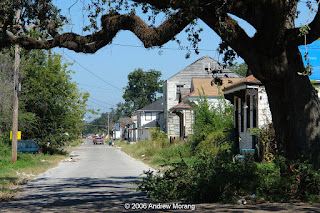 I don't mean to imply that there was not damage in the Holy Cross area, but it was less than the area further north. 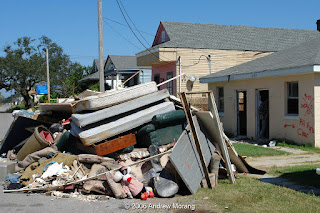 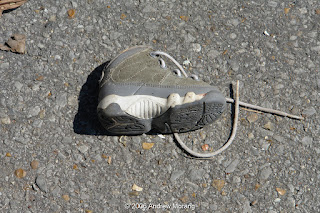 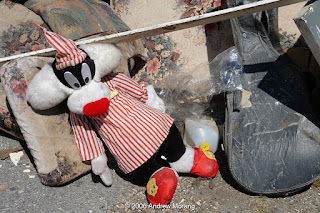 Commercial companies (consisting of Mexican workers?) cleared debris out of houses. Children's toys, mattresses, clothing, moldy sheetrock, and other mess was still being piled in the streets a year after Katrina. 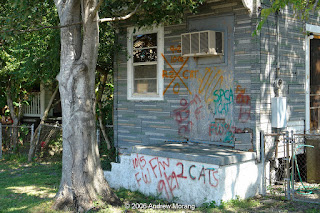 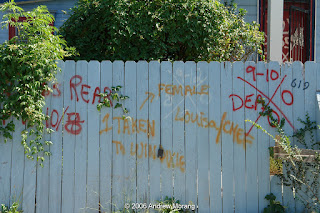 The markings showed where rescue workers checked the buildings for human or animal victims. 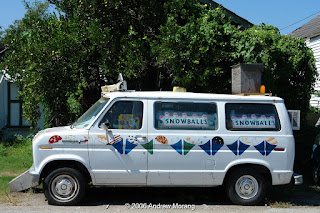 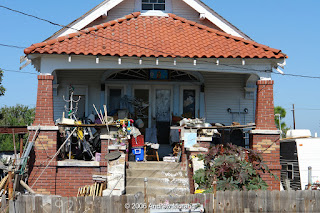 In 2006, we saw a few signs of business returning, as per this snowball truck and the recycler who stored things on the front porch. 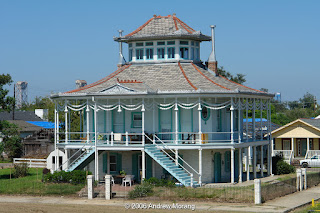 This is one of the two Doullut Steamboat Houses, built by Captain Doullut in 1905. They are on Egania Street and are designated as historic landmarks. 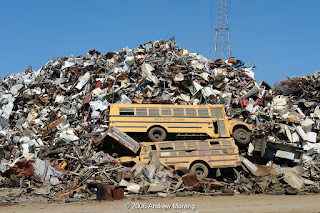 Back to the Industrial Canal, we saw one of the largest metal scrap piles we have ever seen. This is where old wash machines, stoves, and school busses ended up after being retrieved from streets and houses. We were told that much of this metal scrap went to Bangladesh. You can tell the scale of the pile by the two Holy Cross school busses.

Ten years on, the Holy Cross area looks good, residents have returned, and rents are sky high. The school has moved to the Gentilly area, and the old buildings have been demolished. The neighborhood is changing, and it is good to see the historic homes renovated and revitalized.

Photographs taken with a Sony DSC-R1 digital camera.
Posted by Kodachromeguy at 18:24

New Orleans lost a large part of their population due to Katrina. Worsening it is that their city government has basically turned away from full recovery and focused almost solely on the segments that bring in tourists.