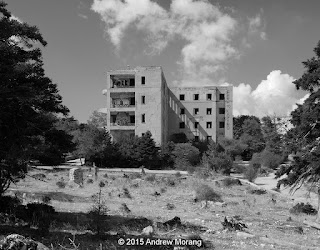 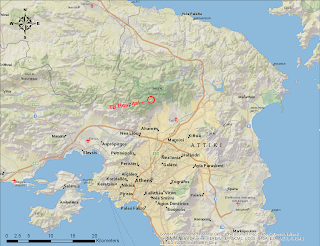 Mount Parnitha (in Greek, Πάρνηθα) is a mountain about 30 km north of downtown Athens. When I was a child, it was a common Sunday outing to drive up the winding mountain road to the upper reaches of Parnitha to play in the snow of just enjoy the dense forests. We always passed a hulking old hospital that my parents said was a former sanatorium. In the 1950s, the memory of tuberculosis (or TB) was still fresh in many people's minds. Before the era of antibiotics, a long rest in an environment with clean air was the only hope for TB sufferers (and even then, the recovery rate was low). 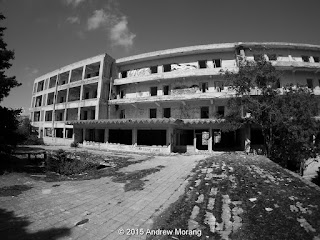 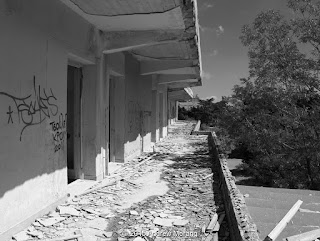 A hospital on Parnitha was first was built in 1912 to treat patients suffering from tuberculosis. The facility treated many prominent citizens of Athens over the years. Unfortunately, despite the best efforts of doctors and the purported benefits of the fresh air in sanatoria, in the early 20th century, over 50 percent of patients died within five years. The first successful immunization against tuberculosis was based on attenuated bovine-strain tuberculosis, known as the bacille Calmette–Guérin (BCG). The BCG vaccine only received wide acceptance in USA and Europe after World War II. Thanks to public health initiatives, tuberculosis was largely eradicated from most of Greece and the Parnitha hospital closed in the 1950s or early 1960s. The building at the site is newer than 1912, I guess a reconstruction from the 1950s. 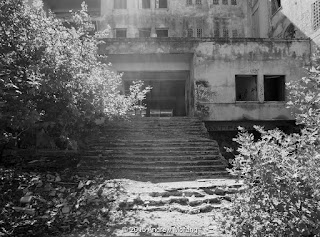 Around 1965, the Greek National Tourist Organization bought the hospital and renovated it as part of the now-defunct Xenia hotel chain. What a disgusting concept: a TB hospital as a hotel?
The Xenia hotels were a major infrastructure program in the 1950s and 1960s, when Greece wanted to enhance its tourist potential. After the devastating civil war that ended in 1949, Greece lay in ruins and only major cities had hotels. The Xenias were often built in beautiful locations near archaeological sites. Many were of post-war modernist architecture. But they were government-run, and by the 1970s (even the 1960s) were hopelessly outclassed by commercial hotels. I recall drafty, echoey entry halls, erratic hot water, and grim breakfasts that featured stale bread, Nescafe, and a disgusting Tang-like orange drink. According to Wikipedia, the Xenia program was terminated in 1983. Many of the concrete buildings have not aged well, and they often looked out of place in towns among classical stone buildings. 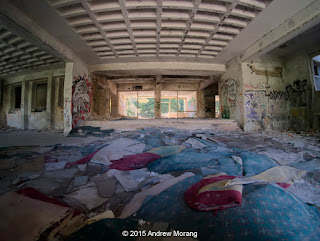 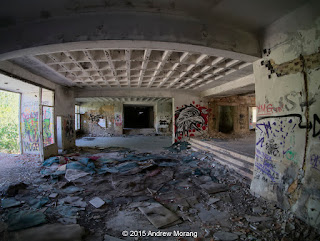 The intrepid visitor ascends the crumbling steps into what was once the main entry hall. Some of the carpet is still there. I processed these photographs in color to show the red and blue carpeting, probably not very elegant even in the 1960s. 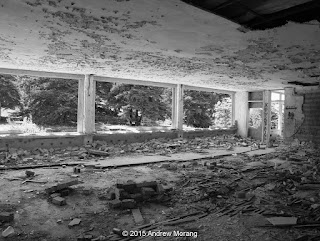 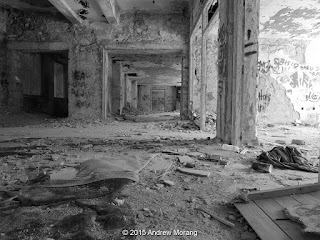 I suppose in the past, the public rooms might have been reasonably cheerful on sunny days. 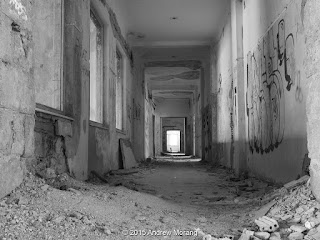 The hallways are long and gloomy, and the concrete and plaster is spalling and crumbling into powder. 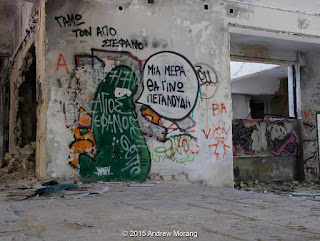 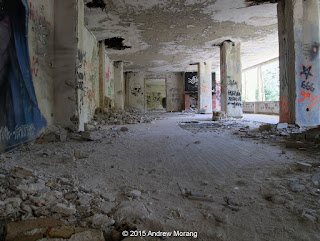 Some of the graffiti is pretty imaginative and worth showing in color. 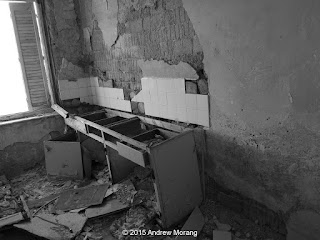 I did not see much furniture. Some bloggers have shown kitchen equipment, but I was hesitant to explore too deeply by myself. My nephew said drug activity happens there, but on the weekday that I visited, all I saw was some other photographers. Still, I decided to not venture alone into the dark cellar. 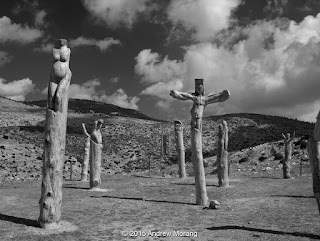 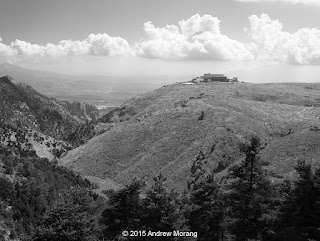 In 2007, a devastating fire burned a wide area around Parnitha. The fire destroyed rare Greek Fir and Aleppo Pine. Since then, the fallen timber has been removed, leaving a wasteland of bare rock and thin soil. The forest will take decades or centuries to recover. The odd sculpture garden used fire-damaged tree trunks.
The lower photograph shows the Regency Casino Mont Parnes, minus the once-beautiful forest. The casino and hotel have a cable car, but the site is so remote from Athens, I am surprised it can remain in business.

Click the links below for other articles on the TB sanatorium:

PBS (Public Broadcast System) aired an excellent documentary in February, 2015, on tuberculosis in America, titled The Forgotten Plague. I recommend it highly.

I took these photographs taken with a Panasonic G3 digital camera, with RAW files processed in PhotoNinja software. I drew the map with ESRI ArcMap software.

UPDATE:  For some 2016 photographs on Kodak Tri-X film:  https://worldofdecay.blogspot.com/2016/12/the-tb-hospital-on-parnitha-greece.html

with new information. I have found it extremely useful.

Just read your website. Good one. I liked it. Keep going. you are a best writer your site is very useful and informative thanks for sharing!
Hysteroscopic Surgeries in Bangalore | Urogynecology in Bangalore | Infertility Surgery Treatment in Bangalore