Long-time readers know I often convert my digital RAW files to black and white. Recently I tried the DxO FilmPack 5 film emulation software. I thought it would be interesting to see how some scenes in Arusha, Tanzania, would look if I had been using film (click any of the pictures to see them at 1,600 pixels wide). 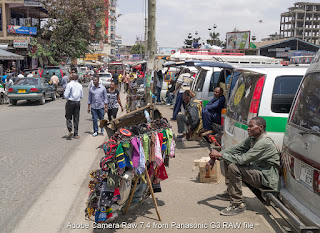 This is the central bus station in Arusha. This is the RAW file from my Panasonic G3 camera opened with Adobe Camera Raw 7.4 with minimal manipulation other than  increasing exposure in the shadows. The colors are good and there is a long range of exposure from dark to white. Digital capture is amazing. 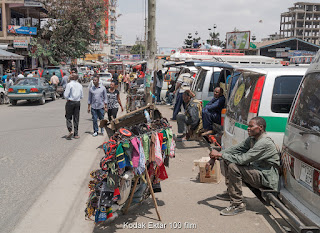 This is the simulation of Kodak Ektar 100 film. It was an excellent emulsion and looked a lot like the pure digital capture. Note that this was a negative film, meaning it was intended for printing on color print paper. Depending on the type of paper used and the filtration during printing, the final print might look quite different. 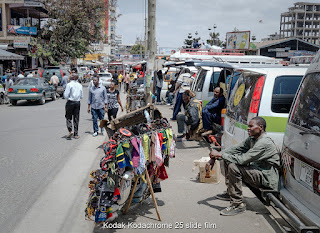 Here is my favorite slide film from the past, Kodachrome 25. Note the "clean" high contrast appearance. 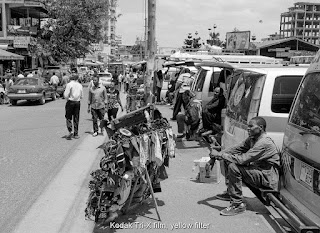 Here is my favorite black and white film, Kodak Tri-X, with yellow filter added to enhance contrast a little. You can still buy Tri-X in various sizes. 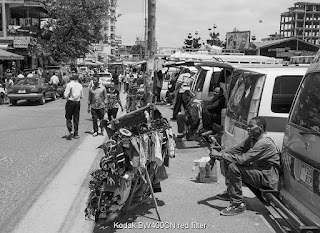 Finally, here is the Kodak BW400CN black and white film with red filter. The BW400CN was discontinued in 2014 but can still be found in bulk on ePrey. This was a convenient  film because it was developed in C-41 chemicals at any color print lab (in other words, color print film but with monochrome dyes only). It scanned well - buy some while you can. 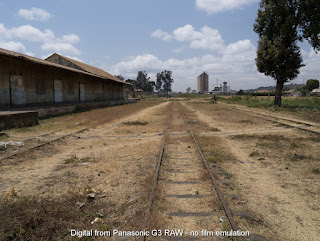 This is the abandoned railroad station. This is the standard digital output with good exposure range and reasonably realistic colors. 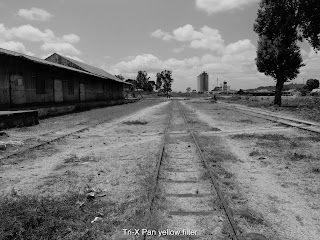 Here is the same scene but processed with DxO FilmPack 5 with the Kodak Tri-X film emulation. I added the yellow filter, which darkened the sky when using real Ti-X. Depending on filtration (green, yellow, orange, red, etc.) there are almost endless ways you can modify the tonality. 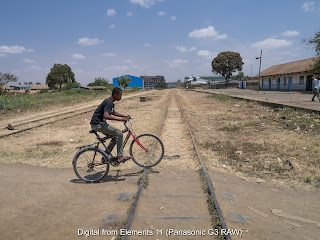 Her is another scene from the rail yard, the standard digital RAW file opened in Adobe camera Raw 7.4. 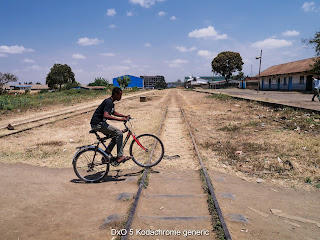 Here is a film that DxO labeled as Generic Kodachrome. Note the bright blue of the warehouse in the distance. The Kodachrome of the 1950s and 1960s was highly saturated, resulting in the "Kodachrome look." Kodachrome is gone forever, but many other films are still available. Borrow a film camera and try some traditional (real) photography as an aesthetic challenge.
Posted by Kodachromeguy at 18:04

I have not shot film (or slide film) in years. I know I bought my first digital camera in 2001 for a trip to South Africa, and doubt I used film after that. It was definitely a different world back then, and the good ones were good and the bad ones were not.