On the Waterfront: Movie Stars of Kowloon (Hong Kong)

Victoria Harbour is one of the great natural anchorages of the world. It is sheltered from the worst of typhoons and, at least before super-sized vessels came into use in the mid-20th century, was a natural deep-water port. As stated in Wikipedia, "The harbour's deep, sheltered waters and strategic location on the South China Sea were instrumental in Hong Kong's establishment as a British colony and its subsequent development as a trading centre." 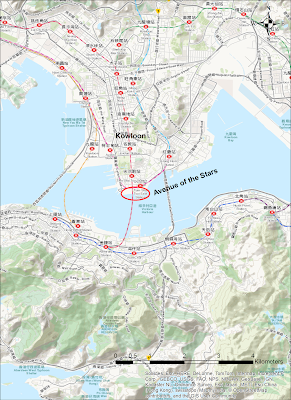 The original British settlement of 1841 was on Hong Kong Island, while the Kowloon Peninsula, on the mainland side of the waterway, became a colony in 1860, followed by the New Territories further inland. Great Britain gained a perpetual lease to Hong Kong island 1842 when the Treaty of Nanking ended the first Opium War with China. At that time, many in Britain felt the country had been duped by the Chinese because Hong Kong was sparsely populated and far from any of the centers of imperial Chinese trade. But after Britain proclaimed Hong Kong to be a free port in 1842, the colony grew and flourished, eventually becoming the great center of finance and commerce that it is today.
The Kodachrome slide shows Victoria Harbour and Kowloon in 1950, before the waterways had been subject to extensive landfilling (often called "reclamation," as if something in nature needs to be reclaimed). The U.S. fleet is showing its presence. The Communists under Mao Tse-tung (or Zedong) had just completed their occupation of mainland China, and I am sure the United States was saber-rattling to warn Mao to not even dare think of invading the British Crown Colony of Hong Kong. 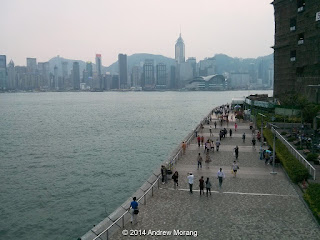 Today the Kowloon waterfront is a refined and popular tourist attraction, especially the Avenue of the Stars. 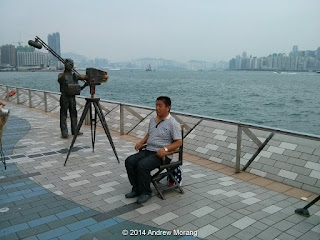 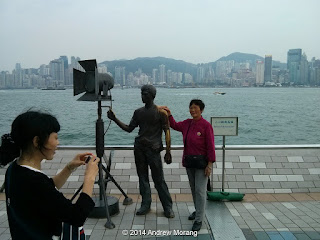 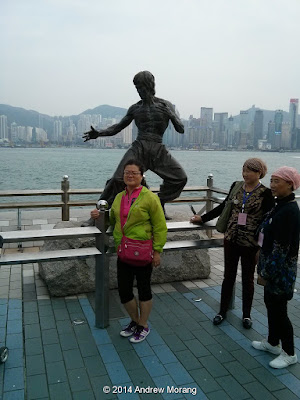 Bruce Lee is here along with other Hong Kong movie stars. You can be a film director, too. (Trivia note: Bruce Lee, like yours truly, was a former University of Washington student.) 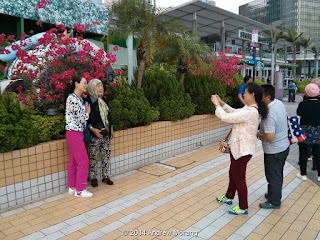 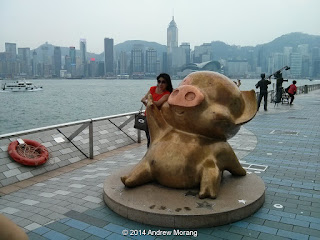 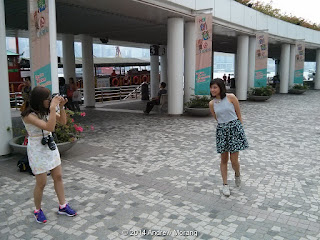 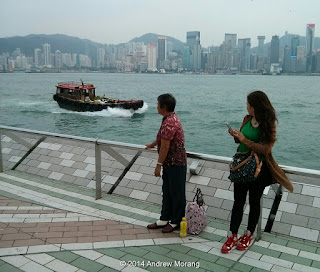 This is a popular destination for visitors from the mainland. I did not realize it before my 2014 trip, but residents of the mainland need a visa or permit to travel to Hong Kong - they can't just drive in or take a train on a whim. We noted that the ladies were typically immaculately and fashionably dressed, while the gents often looked like Bubba came off the farm and took the bus to Hong Kong. 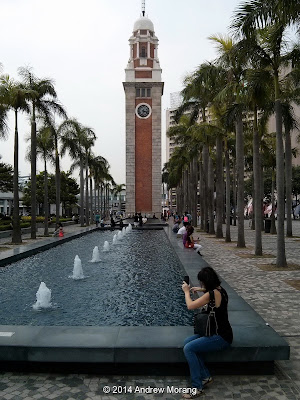 This is the clock tower, near the ferry terminal. Take the ferry across the harbour and watch the scenery unfold as you cross to Hong Kong Island. 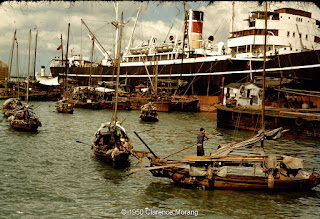 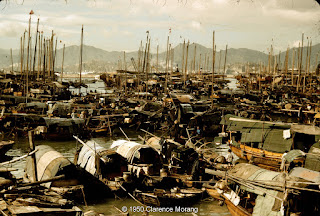 Sampans in Hong Kong Harbor, 1 Oct 1950. Only a year after the Communist conquest of the mainland, thousands of refugees had fled to Hong Kong, settling in Kowloon and on innumerable floating communities. These sampans were highly vulnerable to typhoons that periodically swept across the South China Sea. The small boats are now gone and the setting is much more industrial and sterile.

1950 photographs taken on Kodachrome film with a Leica IIIC camera and 5cm ƒ/2.0 Summitar lens (still in use occasionally 65 years later). The 2014 frames are from a Nexus 4 phone (sorry). I made the map with ESRI ArcMap software.
Posted by Kodachromeguy at 09:30