The TB Sanatorium on Parnitha, Greece - Revisited in 2016 with Tri-X Film 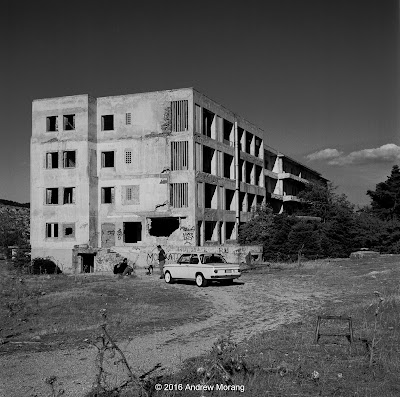 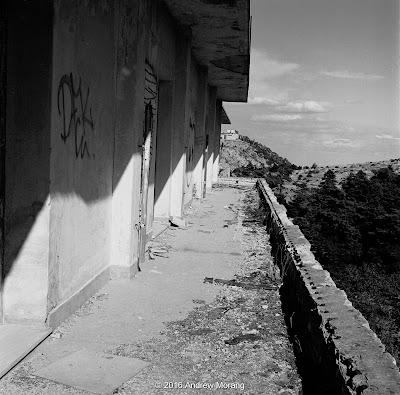 Mount Parnitha is a mountain northwest of the urban sprawl of Athens. In 1912, a tuberculosis sanatorium was built up on the slopes to treat TB patients. In that era, rest in a quiet environment with fresh air was the only means to help victims of the disease. Many Athenian notables spent time there. In sunny weather, it was a nice setting. But in winter, it must have been gloomy for the patients, and Parnitha was known for its winter snows. Thanks to public health initiatives and the availability of modern antibiotics, tuberculosis was largely eradicated from most of Greece after World War II, and the Parnitha hospital closed in the 1950s or early 1960s. Sanatoriums around the world closed, and many of these gloomy old buildings have become popular topics for urban decay photography or paranormal exploration. 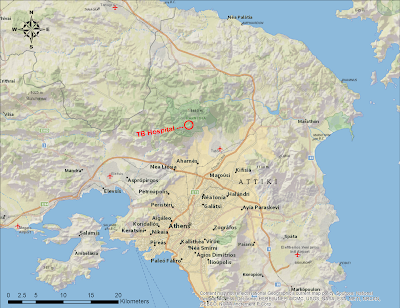 Around 1965, the Greek National Tourist Organization bought the hospital and renovated it as part of the now-defunct Xenia hotel chain. Grotesque! Sometime later, it became a training facility for the Xenia organization and closed about 1980. The building you see in the first photograph is clearly not from the 1920s. I have been unable to find information if the original hospital was demolished or added onto.

I previously visited the sanatorium in 2015. But on my latest Greek trip, my nephew expressed an interest in visiting the site, and I had film, so off we went on a sunny afternoon. It was busy up there. A film crew was making a music video, complete with lights, reflectors, a drone, ladies with insufficient garments, and a rented BMW 1600 (see the first picture). Other visitors came and went all afternoon. 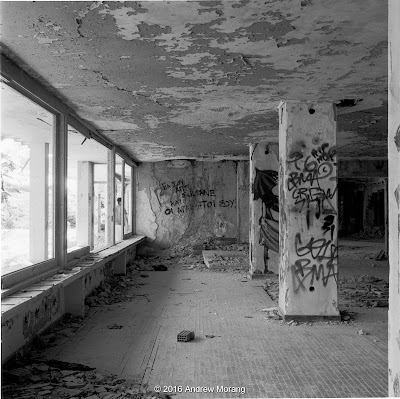 This may have been a sitting room or dining hall. The wood flooring is barely visible through the dust. 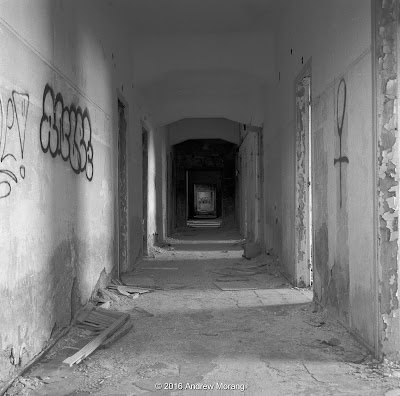 The hallways are as gloomy as ever. This was a 1-sec. exposure, with camera braced on a concrete block. 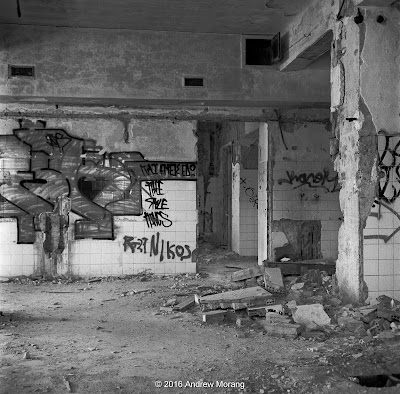 This time, we ventured down into the dark cellar level (I did not in 2015 because I was alone). My sturdy nephew was with me to maintain security, and we brought headlamps. But there were no issues, and several tourist groups wandered by, glad that we had headlamps. The photograph above may be one of the old kitchens. 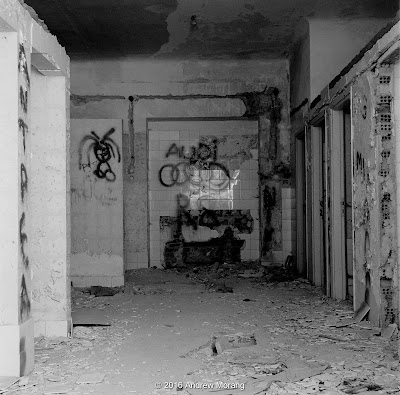 This is a lavatory. The rooms to the right were toilet stalls. Again, a 1-sec. exposure. 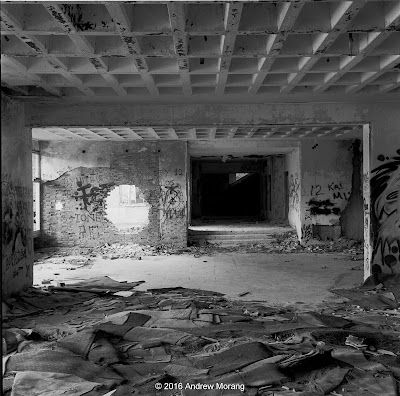 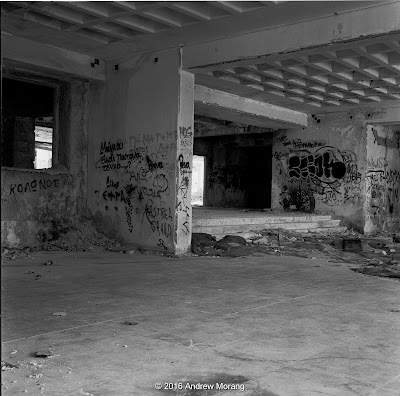 There was not too much more to see in the cellars. Most of the wiring and plumbing has been looted. We never saw any kitchen equipment. The honeycomb concrete panels seem reasonably intact, but the degree of cracking plaster, concrete-spalling, cracks, and brick debris make me think the hospital is structurally unsound. 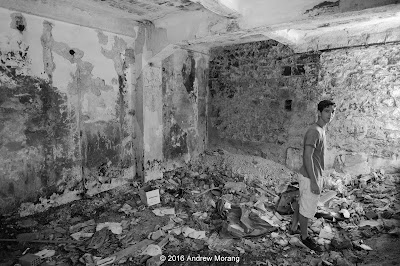 Note the exposed rebars in the wall and the debris scree slope. (This is a digital photograph.) 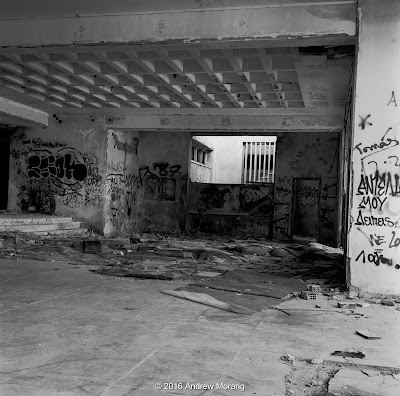 The air shafts have piled debris that has crumbled off the adjacent walls. The old hospital is unsecured. What will likely happen is someone will have an accident or be killed, and then the municipality will reluctantly secure the site and pay for demolition. And of course, it will be no one's fault for having neglected the hazards for decades.

The square photographs were from a Rolleiflex 3.5E camera with Schneider Xenotar lens on Kodak Tri-X film. Most exposures were 1-sec. long, where I placed the camera on walls or window sills. The Rolleiflex is convenient for this type of work because you can place the body on a support, look down into the viewfinder from any angle, set the self-timer, and move out of the way. I processed the film in HC-110 developer and scanned the negatives at 2820 dpi with a Minolta Scan Multi medium format film scanner. I manipulated the exposure curve to bring up details in the shadows.

As an example of the resolution of the 1960s Xenotar lens, here is a full-size crop of part of the first photograph. You can see the film grain and easily read the license plate.

I am glad to have recorded the hospital with film. Will we be able to open our digital files in 50 years? Will the typical household preserve their digital files for half a century? If you think yes, you are dreaming.

Update 2019:  My nephew told me that the doors and entry ways to the old hospital have been concreted and blocked.
Posted by Kodachromeguy at 14:15

As always, your photographs are haunting and strangely beautiful. I find myself always imagining why you are there, photographing those sites.